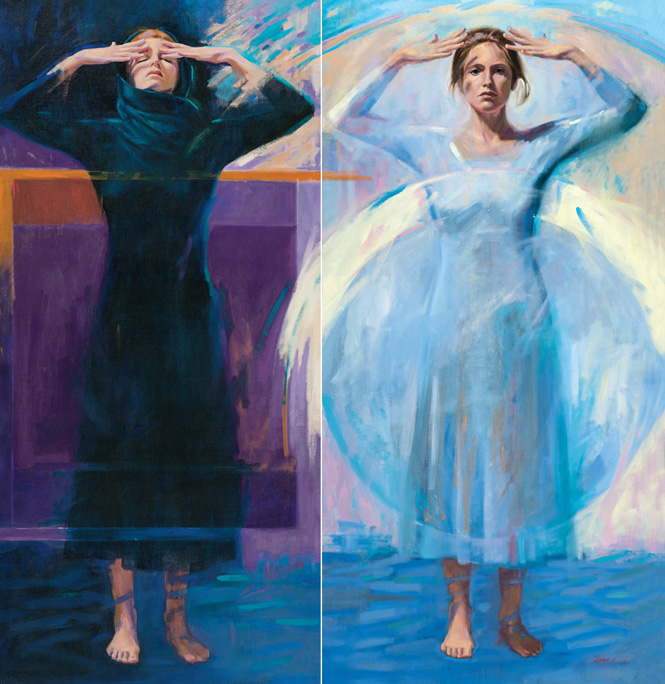 An Innermost Journey: The Art of Shauna Cook Clinger
, in the main gallery at the UMFA through February 15, 2009, raises old questions about the relative importance of content versus form. The museum’s guidebook, Quarterly, credits Cook Clinger with “great artistic skill,” but such assertions are always subjective. Too often they come down to a viewer’s asserting, “It works for me and so it must be good art.” Does conveying content well in itself constitute proof of artistic quality? Regardless of the answer to that question, half an hour in the gallery is enough to make clear that the content, and specifically the narrative content, of these paintings totally trumps such painterly virtues as composition, drama, brushwork, and the rendering of almost everything but the subject’s faces.

The hanging staff of the Museum seems to agree on this point, since they’ve placed a spotlight on each of those faces, causing them to don halos in addition to their other evident spiritual qualities. Have someone stand close and cover the light with a hand and a different painting emerges. Nevertheless, Cook Clinger does possess a skill that, based on uncounted encounters with college art majors, is coveted and pursued by young women: capturing the countenance. Compared to the tight control seen in rendering the heads and some admirable necks — evidently self-portraits — everywhere else is loosely brushed color. In some early works, even the bodies and background blur. Apparently the flesh represents the struggling and immortal soul, the one fixed thing. Everything else is negotiable.

The exhibit begins near the front entrance, in the first of three segments. Hung up the wall, as the UMFA tends to do in this room, but also apart, as though their subjects are withholding their endorsement, are some of her formal portraits. Many in the Utah audience argue that the goal of painting, because it’s most difficult, is duplicating the retinal impression of the original object. Cook Clinger does this in her portraits, which achieve the conviction of augmented photographs. In the corner at the bottom of the stairs, like footnotes to a visual text, a number of drawings, including some sequential studies for the paintings, show how she arrives at such verisimilitude. They’re all figure studies, and on their testimony anatomy means less to Clinger Cook that it does, for example, to V. Kim Martinez in her Mujeres de Colores (see our October edition). Neither is there anything like the drapery studies so characteristic of medieval and Renaissance artists, or preparatory sketches for the occasional accessory or companion animal. Of course this, too, may be a curatorial choice. 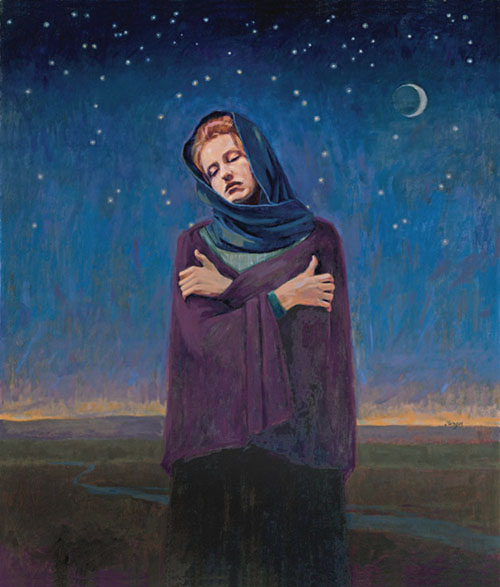 The central portion of the show extends around three walls between the portraits and the drawings, and consists primarily of full-length, life-size figures in solo poses that attempt to show, through a combination of posture, expression, and non — representational elements like geometry and color, the journey referred to in the show’s overall title: a voyage of self — examination that leads to a resolution in which ideology and expectation play a major part. It is this sense of preordained destination, as much as the truncation of the exploratory power of paint, that puts off a certain kind of viewer — even those who share the ideology but remain convinced that this journey ought to take them to a place they can’t so readily recognize from the starting point.

There are at least two possible ways to see growth within this series, but, unlike digital examples, the actual paintings can only be hung so as to point up one of them. Two self-portrait busts near the entrance, one Cezanne-like and the other marked by Post-Modernist text, assert the artist’s awareness of and connection to art history. Chronologically, the arc of the main series begins kitty-corner from the entrance, and moves clockwise to follow her gradual movement from ethereal, insubstantial forms toward more solid figures in context. The setting for the figures in blue cannot be fixed more precisely than invocation and prayer. By the end, the arrival of the Martin Handcart Company and the artist’s ancestor signal significant change. In addition to the narrative that takes place within each work, especially the multiple panel paintings that represent transformation, there is a narrative, a story told in time, that crosses the large wall as the artist moves from the depiction of an emotionally intense but vague epiphany to grappling with specifically spiritual topics that she allegorizes in ways that stretch her art. Near the end she seems to back away again, substituting dance-like gestures for struggle. It may be that this order is meant to represent — moving in either direction — the rising and falling arc of a dramatic confrontation. 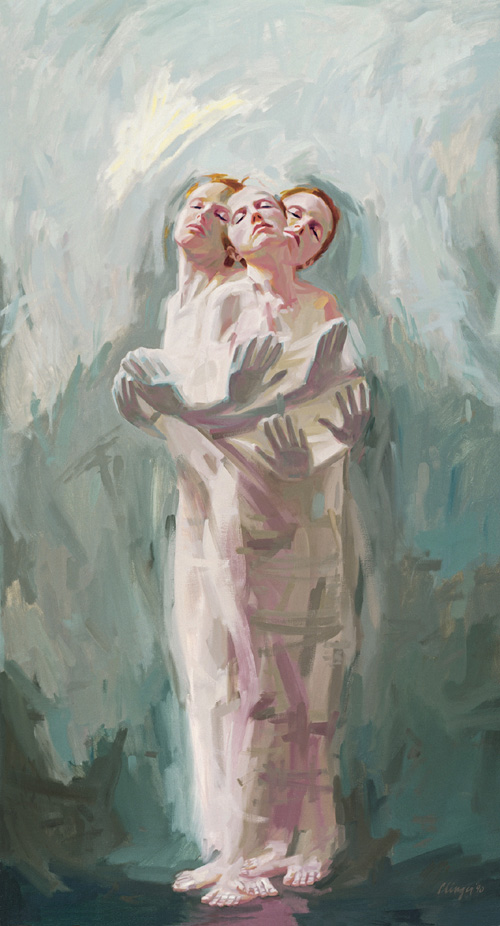 The several centerpieces of the long wall depict a kind of personal rebirth, described in feminine terms wherein the birth canal is represented by a tube or garment of fabric against which the figure struggles to be reborn. Here the largely static compositions seen earlier are replaced by images that, while still centered, struggle physically. Instead of separate panels to represent before and after, the single subject is shown in multiple images, like stroboscopic photographs, and where the references to crucifixion — a body in a draped pose and a horizontal band — were abstract before, the hands of these figures palpably claw the symbolic fabric. They recall Michelangelo’s slaves, struggling with every fiber of their massively muscled torsos to free themselves from the surrounding stone. But the emphasis remains on the faces. Nor is the fabric like that visible upstairs, on the Museum’s John Singer Sargent: an hallucination that up close breaks down into slashed brush strokes, but with distance turns magically into shimmering light. Cook Clinger’s fabric remains a pattern of ornamentally colored brush strokes.

The bodies do become more solid, the next two works featuring fully nude figures in recognizable, if sketchy settings and surrounded by totem animals. One, “All Flesh is Grass,” takes the most chances. Here the omnipresent light from no identifiable source disappears, leaving a figure in the dark. A window and a chair create a theatrical sense of interior space, while the nude woman, her flesh an eerie green, passively mouths a blade of grass. She is the only one who appears calm, and the only one who makes eye contact with the viewer. 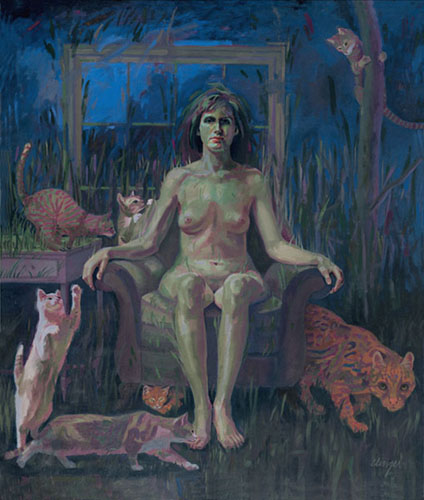 At readings from her 1992 bestseller, Women Who Run With Wolves, Clarissa Pinkola Estés used to tease the few men in her audience, suggesting they, too, would probably soon flee. Whether Cook Clinger similarly polarizes viewers can only be a topic for speculation, since there were almost none on the Saturday when 15 Bytes stopped by. It remains an open question how much painting is sexually dimorphic, but it is possible to argue that Shauna Cook Clinger is the oil-and-canvas equivalent of the current vogue for memoirs of struggle and transcendence that is sometimes labeled “Chick-Lit.” But it would be a mistake to make her thereby the exemplar of women’s art. Here, as throughout society, there are differing approaches to the missing half of the human story, even among those who live it. Olivia Mae Pendergast describes her own approach to painting in a way that stands in marked contrast to Cook Clinger’s continual variations on her own likeness. In a video commentary on her recent sojourn to Malawi (see our blog), she says, “Basically, when I’m painting these paintings I’m painting myself, but they have Malawian faces …. It would just get really boring to continually paint myself…with this face and this body….” In other words, she acknowledges that art will always have a solipsistic quality. But she implies, and the example of Shauna Cook Clinger’s foibles, even alongside her successes, may ironically agree, that art serves itself and us best when the artist seeks herself in others, and projects what she has to say about her own life into them. 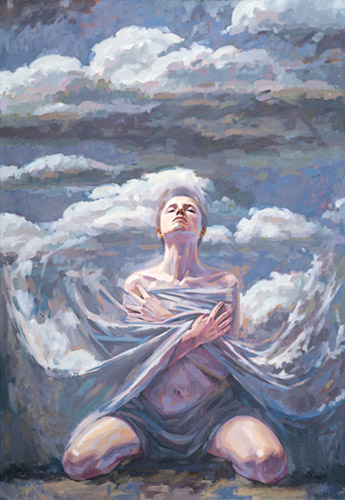 An Innermost Journey: The Art of Shauna Cook Clinger is at the UMFAthrough February 15, 2009.