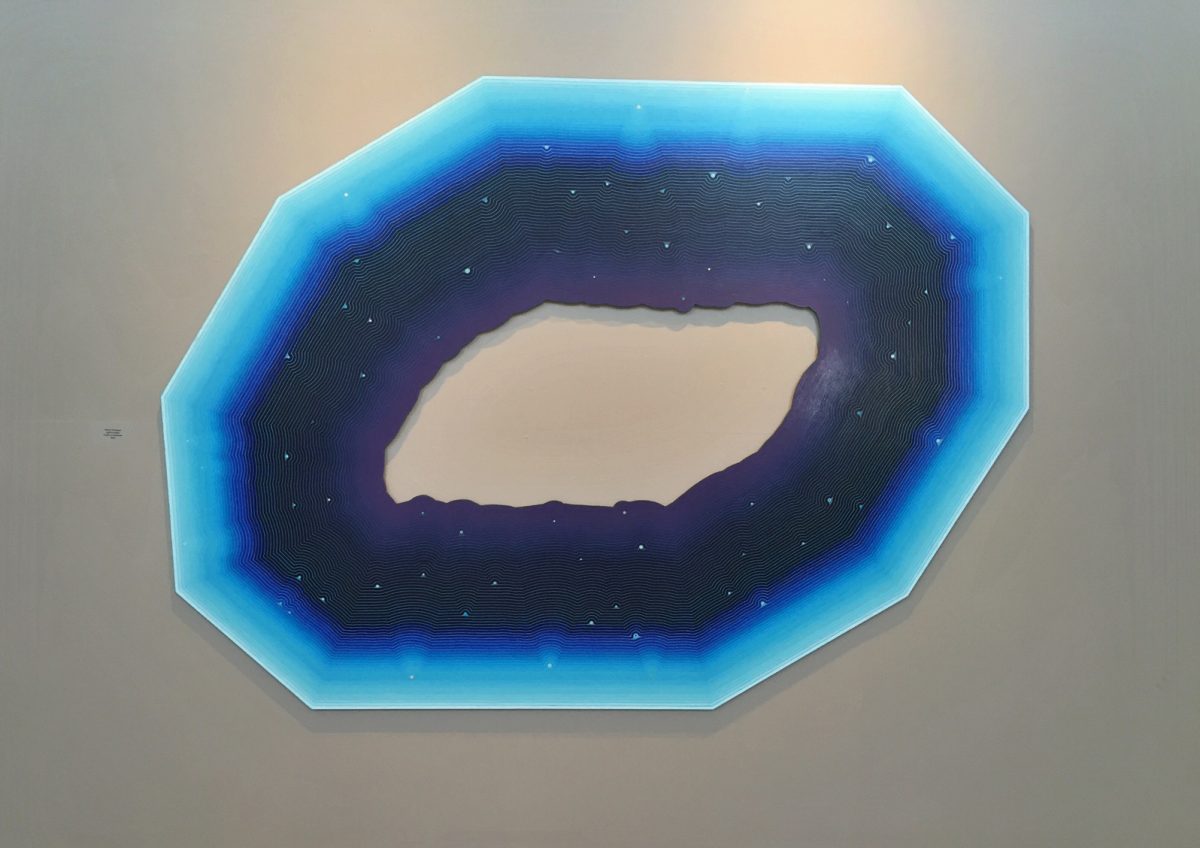 “Lift not the painted veil which those who live
Call Life: though unreal shapes be pictured there,
And it but mimic all we would believe
With colours idly spread…”

In part, Shelley’s sonnet “Lift not the painted veil” is about casting fake appearance, putting up a front, masquerading throughout life, covering one’s true essence through pretense, false posturing, façades and veiling—a  type of lived inauthenticity.

What can be seen then is false, counterfeit, and superficial.

Veils keep the true form of objects (and people) hidden, but, simultaneously, act as an allure, a semitransparent materiality to add mystery to the object beneath. That which is covered or made mysterious is all the more captivating when unseen, when suggested, rather than exposed. 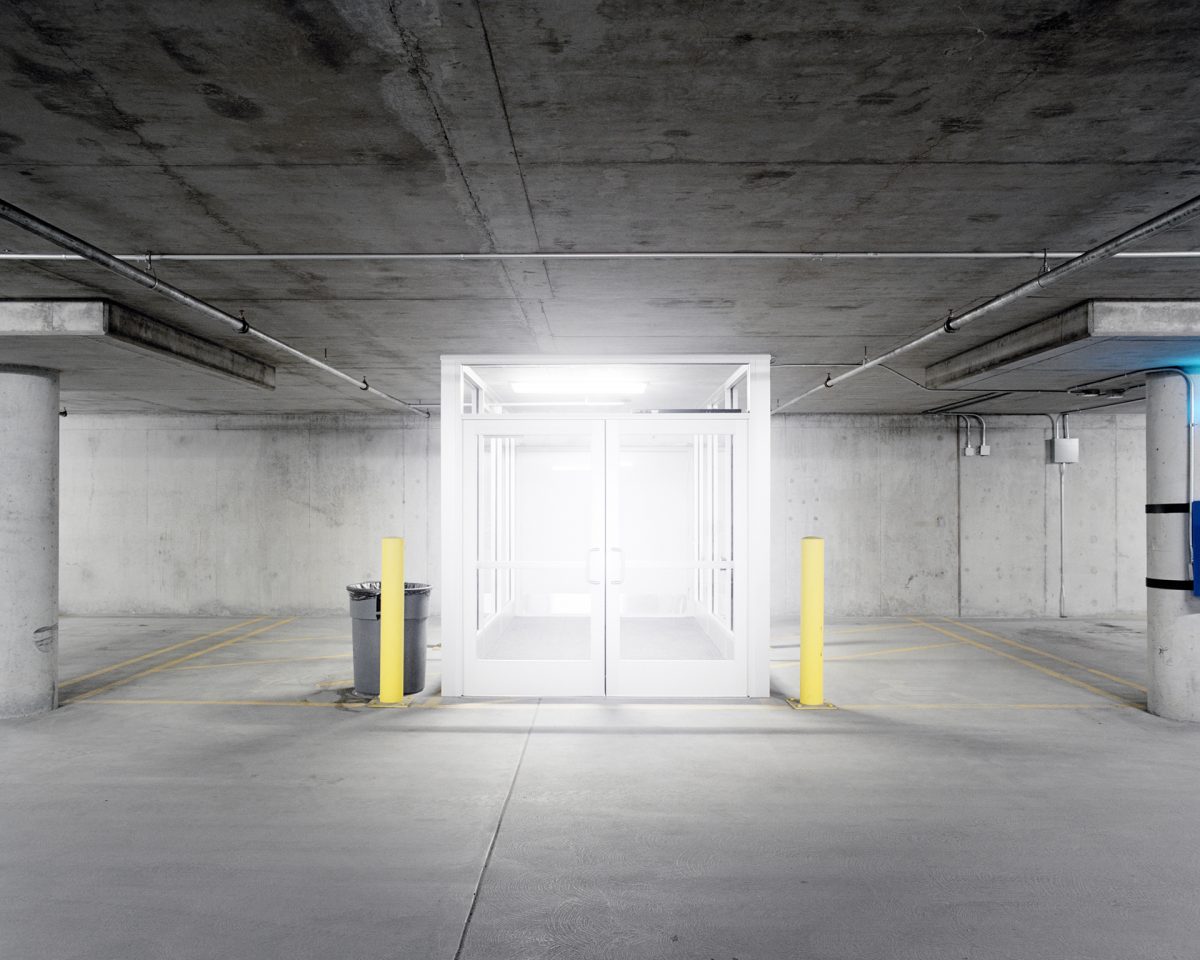 Such an interpretation of the painted veil, as Shelley draws, is taken only in part for the exhibition of the same title curated by Jorge Rojas, now up at the Rio Gallery and including the work of 15 Utah-based artists — Trent Alvey, Jan Andrews, Christine Baczek, Jared Lindsay Clark, Daniel Everett, Jenevieve Hubbard, Sarinda Jones, Amy Jorgensen, Beth Krensky, Stephanie Leitch, Lizze Määttälä, Colour Maisch, Jared Steffensen, Roland Thompson and Brian Usher. “This show is also about seeing and how the act of seeing can be a philosophical, creative and even a mystical endeavor, as well as a sensory one.” says Rojas.

He continues, “The Painted Veil focuses on work that requires the viewer to look through, into or beyond the artwork. Several works possess qualities of transparency, translucency and opacity that allow light to filter through.” As is common with Rojas’ own artistic practice, mysticism plays a strong role throughout the exhibition, as does seeing without being completely seen, material transparency, and object masking. 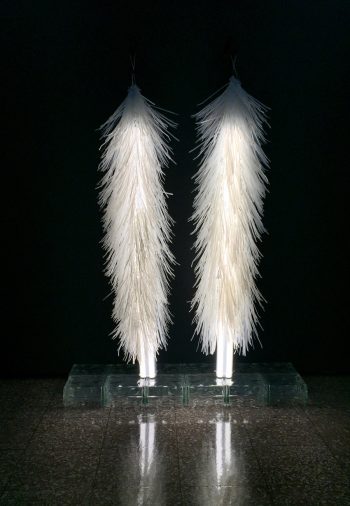 Take Trent Alvey’s work — two shaggy shafts of glowing plastic mounted on glass blocks lit by fluorescent bulbs titled “Slipping Glimpsers.” Alvey suggests that they make reference to a reoccurring dream she had as a child, a visual that lingered in her subconsciousness, seen, but only sideways, never fully grasped.  Paraphrasing de Kooning in reference to her work, to her experience, she says “. . . I would be walking and then slip a little and then get a glimpse of something.“  It was, for her, something that was known only indirectly, in the periphery.

Veiling also takes on a new reading when paired with readymade objects which are masked or repurposed from their assumed original use. Jared Lindsay Clark’s collection of princess-looking tchotchkes, “Cutlage Kitschebilds,” are gathered from the fray of cluttered discards then turned on their sides, then covered in drips of paint. It is, significantly, one of the few works that references the ‘paintedness’ from the title directly. In his statement, Clark asks:

Paint covers the figures, which simultaneously masks, transforms and illuminates them. The assemblage creates an amoeba-looking picture plane, which highlights the hollowness of the plaster cast.

Amy Jorgensen’s “Dissections,” are light-sensitive emulsions placed on her skin and developed over time, through body heat. The end result produces images of Jorgensen’s skin, clothing, and hair so micro in focus that they appear abstract, or what she calls “visual residue of experience.” In part, there is a sense of seeing deep and in detail the body and thinking about skin, which is both subject and participant in the photograph, as a type of veil for one’s being. Yet, like the photographs of Trevor Paglen, there is a feigned sense of intimate access, of looking close, without truly revealing anything about the person, the form, the location, the skin. Thus, the dissected body remains veiled. 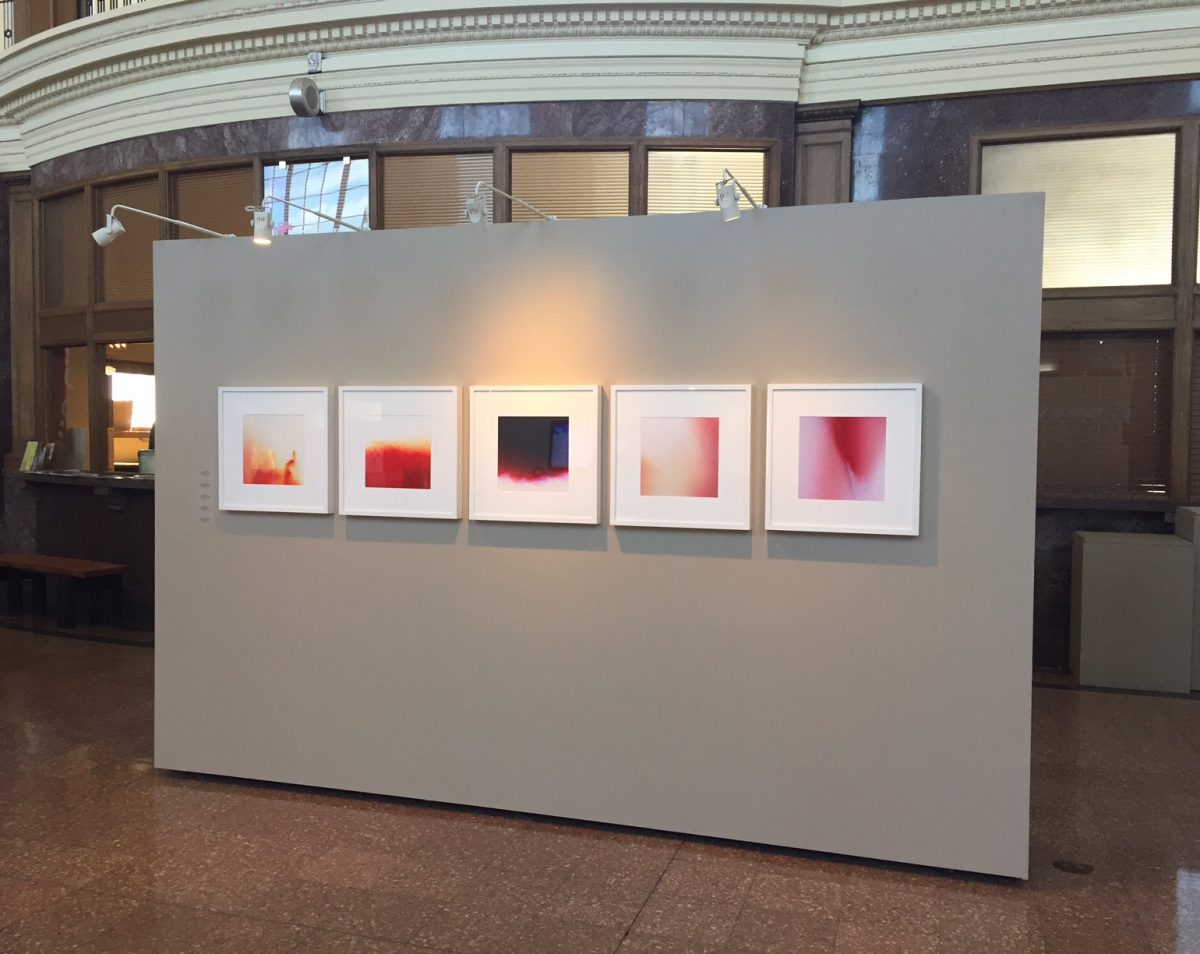 Creating a sense of mystical transportation, Daniel Everett’s “Portal” and Roland Thompson’s “Lights of Night,” seemingly make reference to a religious veil, a screen that divides one paradigm from another. According to LDS doctrine—both artists teach at BYU— the word veil is “a divider separating areas of the tabernacle or temple, a symbol for a separation between God.”1 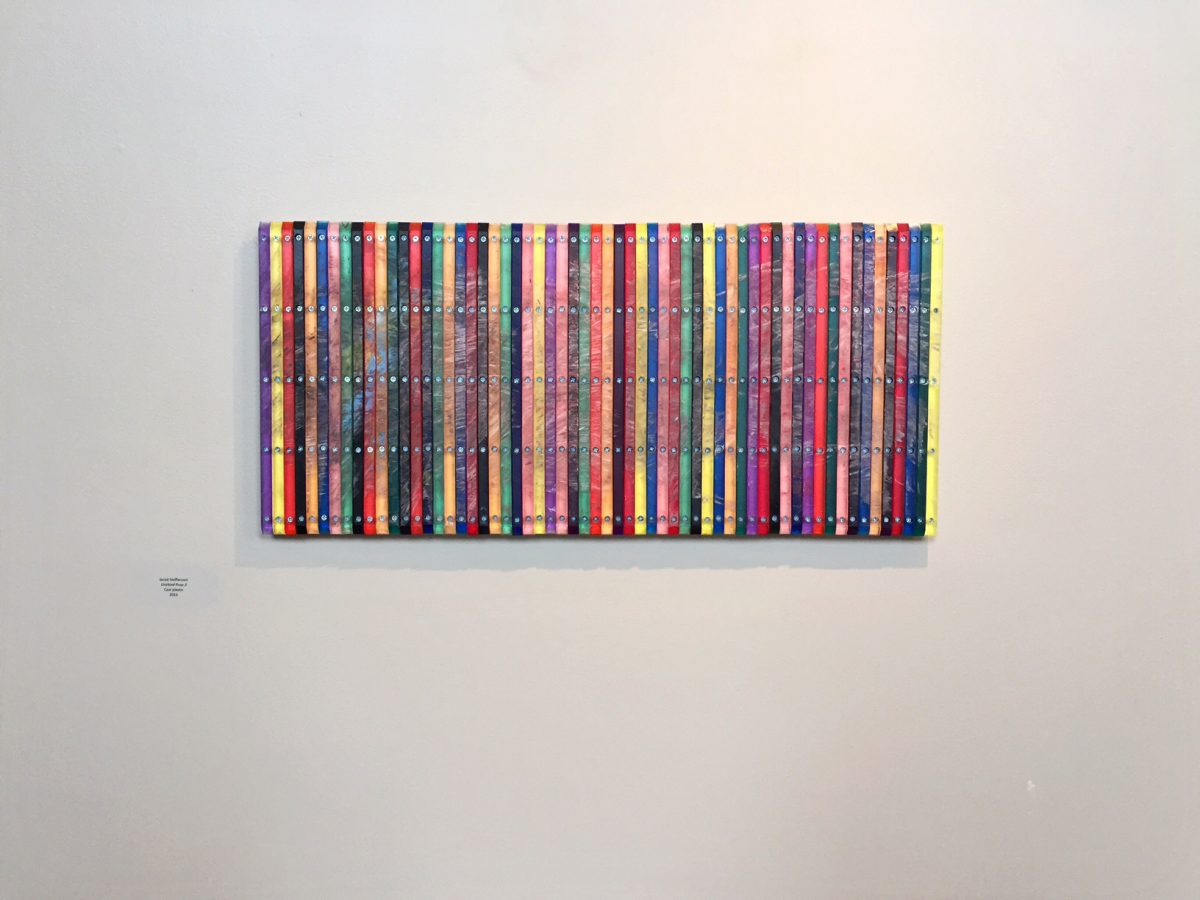 Connections between Rojas’s reading of the veil and Shelley’s poem, from which the exhibition takes its name, are stronger in some works than others. But overall the collective body of work is impressive, and even when the reference to the notion of veiling falters or feels contrived, there remains, with the exhibition, something like unto what Shelley describes as, “a splendour among the shadows.” 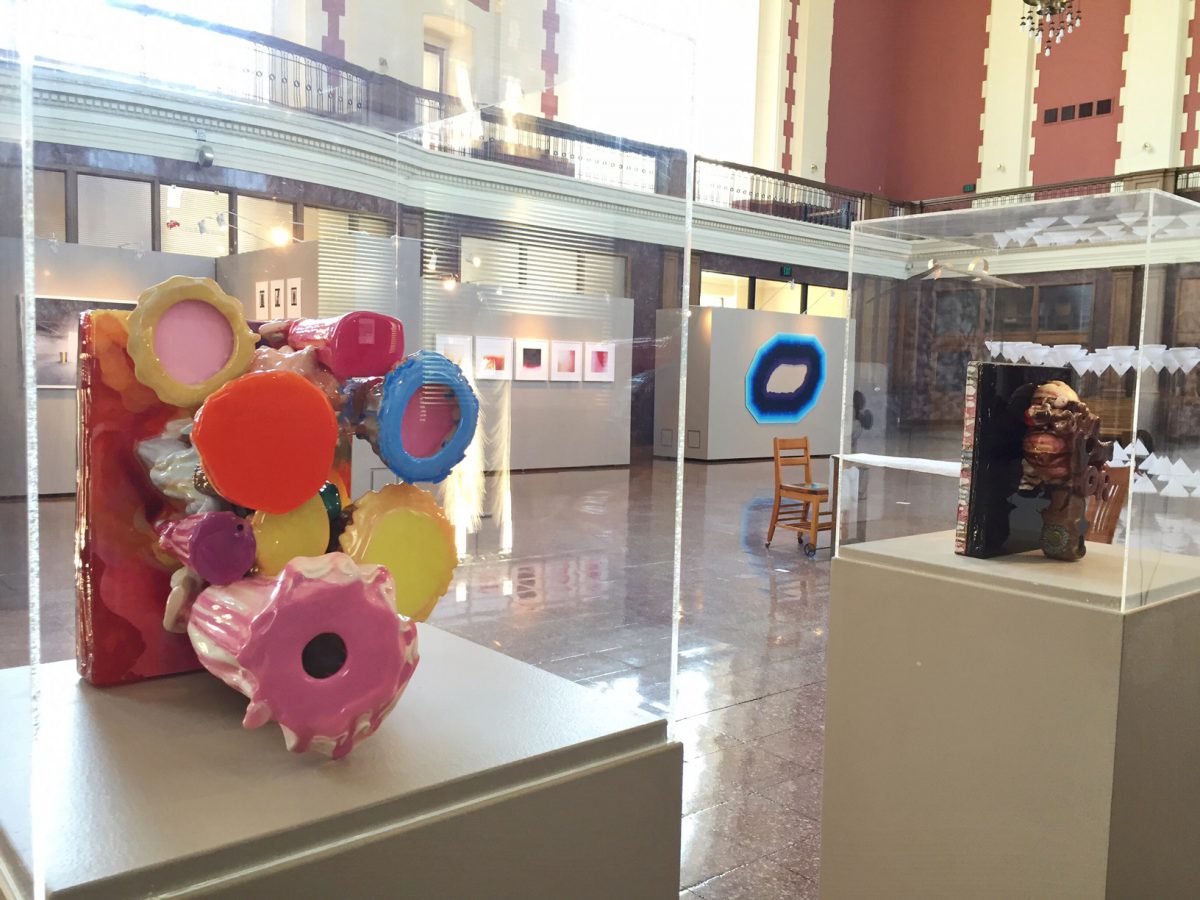