Along SLC’s 300 South, Celebration of the Hand Presents a Mix of Self-Portraits by Local Makers

Beatrice Teigen’s is one of more than a dozen self-portraits on display along Salt Lake City’s 300 South in the downtown area.

There’s a strong case to be made that the most unjustly neglected art form of the last two centuries is the graphic, serial narrative: i.e. the comic, or at it’s often put today, comix. What holds comics back among more traditional art studies is the matter of class. Painting, sculpture, and so forth are located in history, and in socially significant institutions like churches, palaces, and wealthy homes. Meanwhile, comix are rooted in an alternative exploration of physiognomy, in an attempt to use facial expressions and anatomy not to classify and stigmatize people, but to tell their stories in the most universal and accessible way possible. The results have been legitimate breakthroughs in new ways of telling those stories. Even the movies, a good candidate for the most democratic modern art — and which by the way mints money in quantities that put the auction houses of London and New York to shame — have renewed their popularity by mining comics for vivid and popular narratives.

This is all relevant because right now, the most demotic art gallery in town, the dozen black steel frames that extend along 300 South (a.k.a. Broadway) from the Gallivan Center TRAX stop to Squatter’s Pub, which are open to the public 24/7, 365 days a year, features self-portraits by some of Utah’s brightest young artists. While they merit contemplation for what they are, a quick look is all it takes to see that these avatars take substantial inspirations from the comics. Alongside their recent cultural rise is status and importance, comics have managed to hang onto their underground legitimacy, creating a potent mix that plays across boundaries.

Take for instance Kristen Bernabe, whose Internet moniker is burningbee. Along with such revived crafts as knitting and baking, her great preoccupation is Zoology. The relationship of humans to animals is an essential part of the environmental movement, so that what the struggle for Civil Rights was to the ’60s, the rational treatment of animals and an end to their exploitation are today. Artists have often thought of themselves as canaries in the coal mines, but today we’re more likely to focus anxiously on vanishing frogs, and Bernabe, who meant to be a herpetologist before art and cartooning won her over, depicts herself in her self-portrait in a trance-like moment, shared with aquatic and fantastic animal companions who dwell together in a harmonic state.

In the next frame, Kandace Hardee expresses another alternative vision of life as she would be happy to live it. First, she freely contemplates life on another scale altogether, in a curious and even humorous vision of life as a tiny creature, so that what society finds marginal would constitute super-abundance. She also shows herself as a hybrid of human and tree nymph. This ambivalence comes across as not just a willingness to be something other than human, but as a repudiation of the strictly human in favor of a more inclusive alternative. It’s a vision that can be commonly found in comic art. 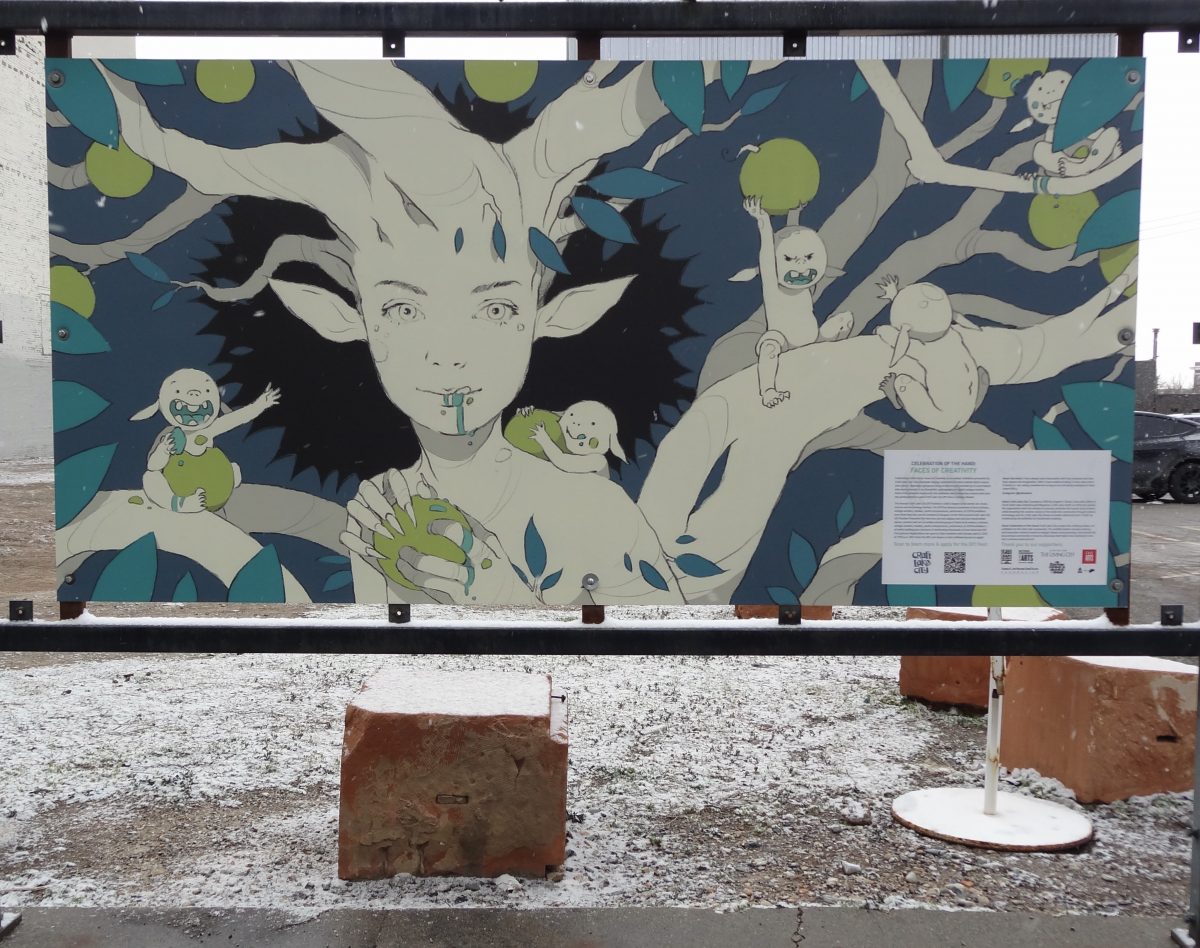 Kandace Hardee envisons herself as a tree, providing a home for a society of fruit-eating creatures. 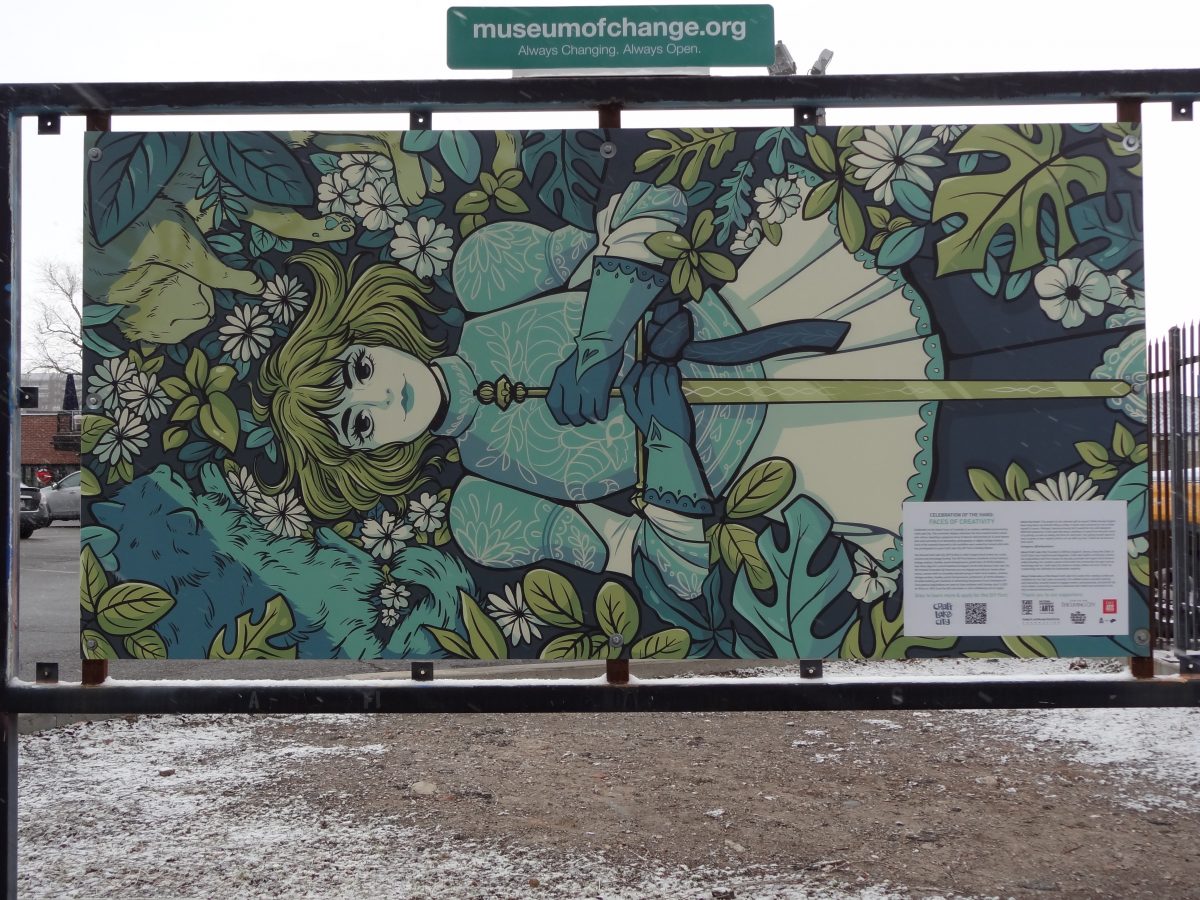 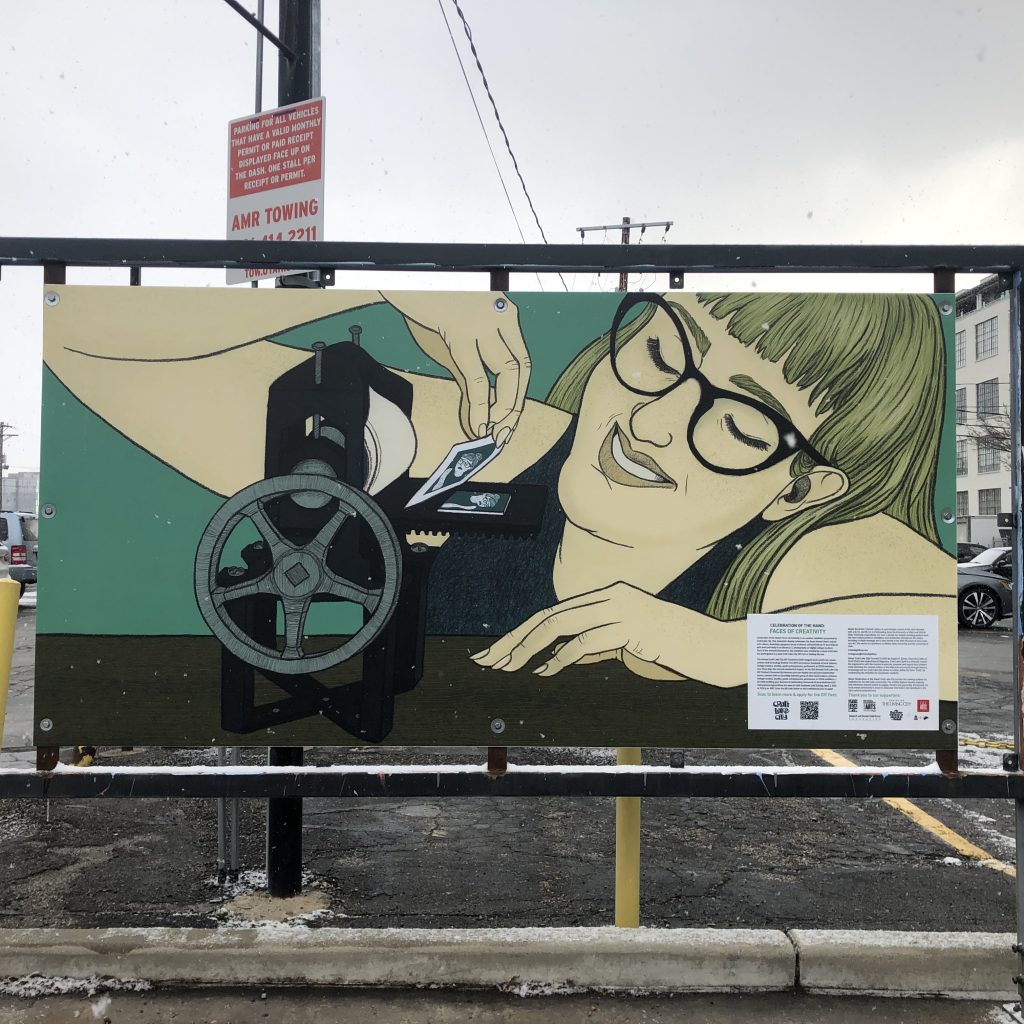 An artist who has ventured into printmaking without separating herself from her origins in comics, Trishelle Jeffery depicts herself like a giant who looms over a classic press, on which she has printed what appears to be another, even more cartoon-like self-portrait. Actually, both she and the press are in proper scale: the miniature press is the one she actually owns, and on which she can demonstrate the mysteries of printmaking. Jeffery, who has taught and led workshops at Saltgrass Printmakers and the U of U, recently showed a couple of meta-comic prints in the UMFA’s Space Maker exhibition. It may have been the first time Utah’s foremost museum of fine art showed work displaying sequential frames.

Most of the artists in this current show do not foreground comics in their work, but the influence is unmistakably present. Maddie Morrill works in numerous media, perhaps primarily in photography and tattoos. Tattoos, which long outdate comics, have added comic images to their repertoire of patterns, while Morrill’s self-portrait adds a layer of classic graphics to their photo technique. Further along Salt Lake’s Broadway, many more examples await discovery.

Celebration of the Hand continues to curate these and other exhibitions, here in an outdoor setting that provides yet another place for Utah artists to showcase their work while enhancing Salt Lake City for both residents and visitors. Celebration is sponsored by Craft Lake City, a 501(c)(3) charitable organization with the goal of advancing art in the Utah Community, but what they do, like each of our many arts-oriented organizations and venues, reverberates far beyond these sidewalk billboards.

Celebration of the Hand: Faces of Creativity, presented by Craft Lake City, along 300 South in Salt Lake City, through April.