All the World’s a Stage, and Brian Kershisnik Paints It 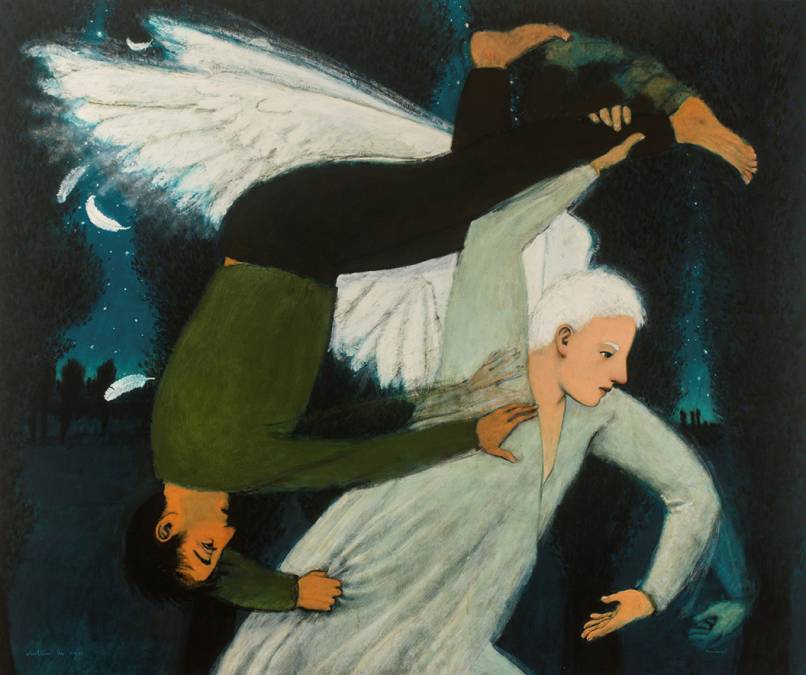 Brian Kershisnik is one of Utah’s best-loved and most-respected artists, and his paintings, whether mural size or off the easel, are in private and public collections from Logan to St. George. He was given the Governor’s Mansion Award in 2010, was selected in 2014 as one of the state’s “most influential artists” by Artists of Utah, and is the subject of an upcoming book project from Unicorn Publishing Group. While people may not be mobbing him in the streets (yet), Kershisnik has achieved what in the Utah art world passes for fame. As some of his recent works suggest, that’s not always a good thing, but it’s yet another part of the human experience that is the source of his works.

The cutout figures and stylized backgrounds of Kershisnik’s paintings make them appear simple, but the artist has an uncanny ability to capture multiple levels of human experience in a simple figure or gesture (his batting average in this respect suggests both talent and hard work). Case in point: his large piece “Wrestling the Angel,” which was recently on view at the Springville Museum of Art. The subject of the piece is ostensibly the biblical account of Jacob, who wrestles all night with — depending on which verses you read — a man/angel/God, until he is given a blessing, a new name (Israel) and a limp (from a dislocated hip). It is the origin story for a people, for a religion. While a work like Gustave Doré’s famous etching of the scene shows a stately wrestling match worthy of a Biblical patriarch, Kershisnik’s depiction is much more human, almost comical: as Jacob is being flung about by the angel, he grabs desperately at the latter’s robe to hang on, appearing, at least in the moment, not so much interested in winning a gift from his opponent as in avoiding having his head dashed against a rock. One need not be a Biblical patriarch, or believer, to understand that feeling. 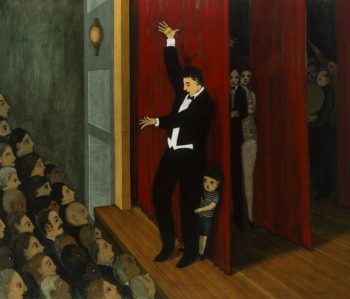 Kershisnik has remarked that instead of painting from life, as many traditional artists will insist upon, he “paints from the process of being alive,” so one could be forgiven for seeing in the artist’s work, the artist’s life; for reading, in two recent works titled “Pulling Over His Own Monument,” the desire of the artist, who in person is genial and self-effacing, to keep in check the temptations of his own notoriety. Or even seeing in a work like “Wrestling the Angel,” not just a representation of spiritual struggle, but artistic as well — the angel as muse, the blessing as style, and fame marking one’s gait like a broken hip. 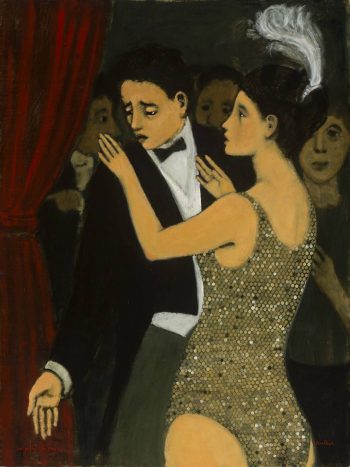 While many of Kershisnik’s works have explored the intimate aspects of life — time with a child, a book, a pet, a lover — many of his recent works examine the idea of the public persona. In three paintings, each entitled “Protected by Performance,” the canvas is split three ways: between audience, onstage performer and figures observing from the wings. In all three, a young child, like the inner child of pop psychology, is wrapped around the performer’s legs, protected but peeping out. Art is part confession and part performance, with family and friends, even the inner self, the sometimes unwilling assistants.

“Le Péché du Magician,” the title of two related works as well as of the exhibition currently at Park City’s Meyer Gallery, implies such an unsettled reading. The use of a foreign language is another type of performance, a sort of protection through translation — the French here could be rendered both as “the sin of the magician” (suggesting a general, abstract notion) or “the magician’s sin” (conveying a more individual, personal story). In either case, the title brings with it overtones of fault, suggestions of secrets. In one, a tuxedoed figure faces his audience, one hand covering his face either in shame or exhaustion, the other outstretched in supplication. The second, where the magician is comforted (or is it entreated?) by an assistant dressed in sequined leotard, becomes a pretty charged piece in the era of the #metoo movement and White House resignations. 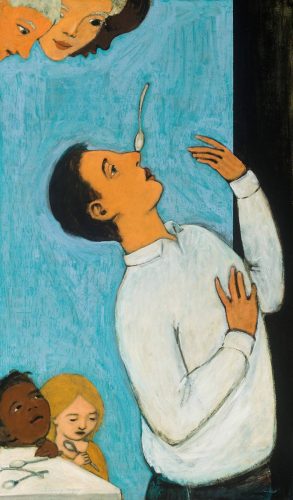 To hint at such a reading is not to ascribe such intent to the artist, but to suggest the multiple readings Kershisnik’s works open themselves up to. Another recent work, “Entertaining Angels,” in which a father balances a spoon on his nose, to the delight of both his two young children and two observing angels, probably should be enjoyed simply as a charming evocation of fatherhood at its best; but some, in their more cynical moments, might find equal pleasure in considering the implied insight that to the believer in an all-seeing God (and his angels), all of life becomes a performance.

That, though, sounds too judgmental, and that is one thing these works are not: it is hard to find in any of Kershisnik’s works a j’accuse or the suggestion of a villain. At heart his figures are simply human and embraced for it. Some artists mix linseed oil or varnish with their pigments, Kershisnik mixes empathy. Which is why his charming, layered, evocative works continue to attract our attention.