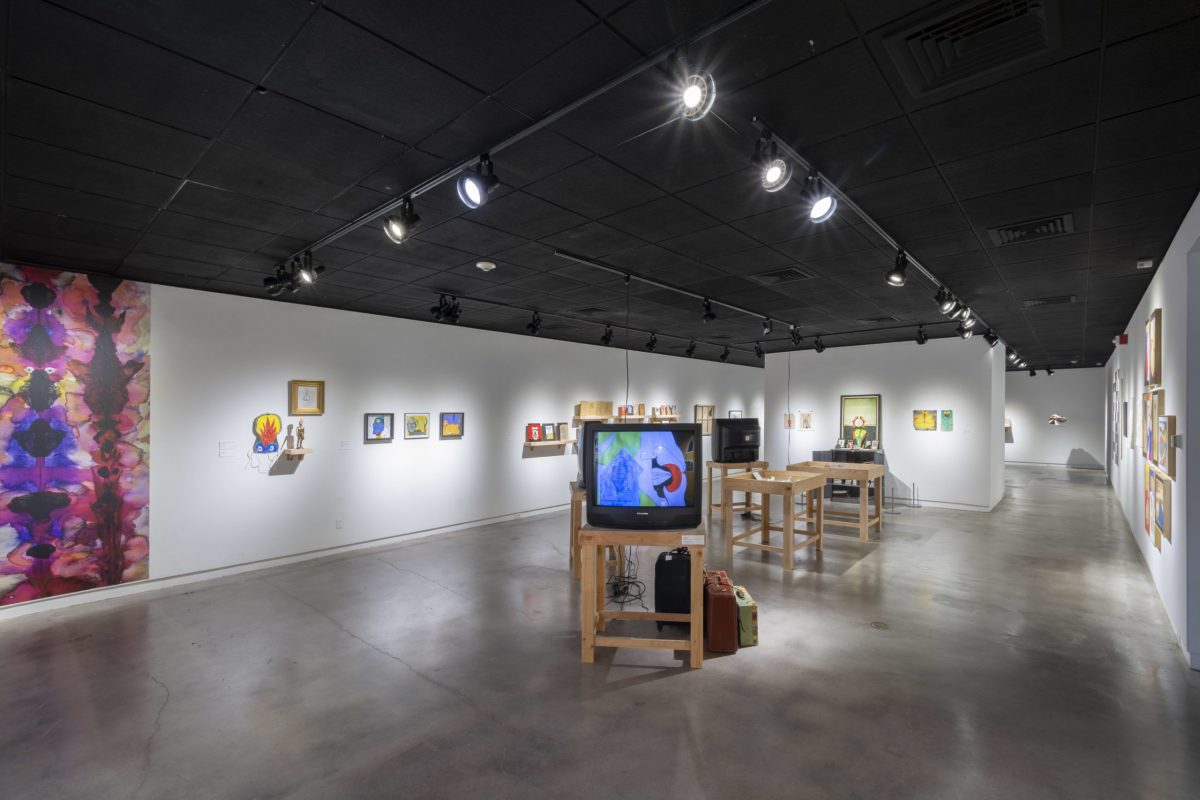 It did seem too bad about the video.

I mean, here’s this uber-intriguing show at UMOCA — joyful, absorbing, edgy, impactful, magical, riotous both in color and often also in mood — a superb conveyance of works-to-date by the genius Beat-origin artist and wordsmith, a professor of humanities and artist-in-residence at UVU. Titled Baggage: Alex Caldiero in Retrospect, it’s accompanied by a rich and must-have catalog of the same name.

“One of the things that’s really beautiful about the show,” says Laura Allred Hurtado, executive director of the Utah Museum of Contemporary Art, “is that the entire exhibition is a self-portrait of Alex and that so much of Alex’s work is about sorting through and picking out and mining a kind of concealed subconsciousness. The show, I think, demonstrates what a rich pursuit that can be and how much baggage is there.”

The exhibition, covering 50 years, begins where it ought, with an image of one of “the best minds of my generation,” to quote the late Allen Ginsberg (a poet much admired by Caldiero, who performs “Howl” every several years for Salt Lake City audiences anywhere from the downtown library to Ken Sanders Rare Books). Here, in a photograph, Caldiero sports a “Tonsured Cut” of a five-pointed star at the back of his skull:

for the Franciscan monk

as I was born blue

Later in the exhibit, a page from The Notebooks series, circa 1978-present, continues the thought:

After I was born again

and forgot I had lived before

I came to myself again

and remembered what I still was

Born in Sicily, Caldiero emigrated at age 9 and was reared in Manhattan and the Bronx; he arrived in Utah at the age of 31 and was a convert to The Church of Jesus Christ of Latter-day Saints. He has received numerous awards and grants, including one from the National Endowment for the Arts, a Best Poetry Award from the Association for Mormon Letters, and a Salt Lake City Mayor’s Award for Literature. 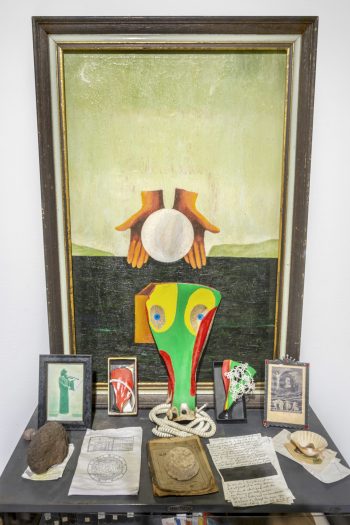 Moving in a circular direction around the exhibition space one discovers that it’s all a marvelous surprise: Paintings of stuff, as well as paintings of words and, naturally, word paintings by this self-proclaimed sonosopher (derives from dada, a mix of sonal practices within the context of language — not as communication but as communion, the artist explains.) There is an excellent 2009 print, “The Sonosopher,” that visitors should look out for, replete with poem.

Of course, there must be baggage, luggage of cardboard and of leather, wheeled and carry-on, in a neat bundle near the door, just by a bin of “Bones and Love Poems” circa 2000. These are brief works, some of them scolding, written on old bones. One set of words is mysteriously inked out — censored with a black bar, like a World War II letter home from Guam but on a single bone.

A bin of “Various Para-Objects” features In Another Sky, 2003, a dead house sparrow in a suitably sized box that is painted cerulean blue and adorned with three fluffy white clouds. (Doesn’t do away with the deadness, though.)

Behind the bin is a metal bookcase with a painting hung above of hands holding a host — a Roman Catholic Communion host. Atop the case is a framed image of a violinist; an old white springy telephone cord; a holy card; a scrap of lace; a seashell; with journals and notebooks inside. (Not unlike my home decor.)

But while this writer is raptly examining an intriguing piece of stacked books, magazines, and invoices hanging from a hook in the ceiling at the back corner (there’s the Heliocentric position of Mercury in 1991, Circulatory System of the Pigeon, a Sports Illustrated cover of Michael Jordan and the Bulls Smoke the Blazers to repeat as champions)  somebody starts to whistle. (Like those dwarves on their way to the mine, you know?) Way beyond distracting. Scanning the gallery, I see that there is no one else about. The whistling stops abruptly; a HORN starts blowing and things are by now even more kinetic. 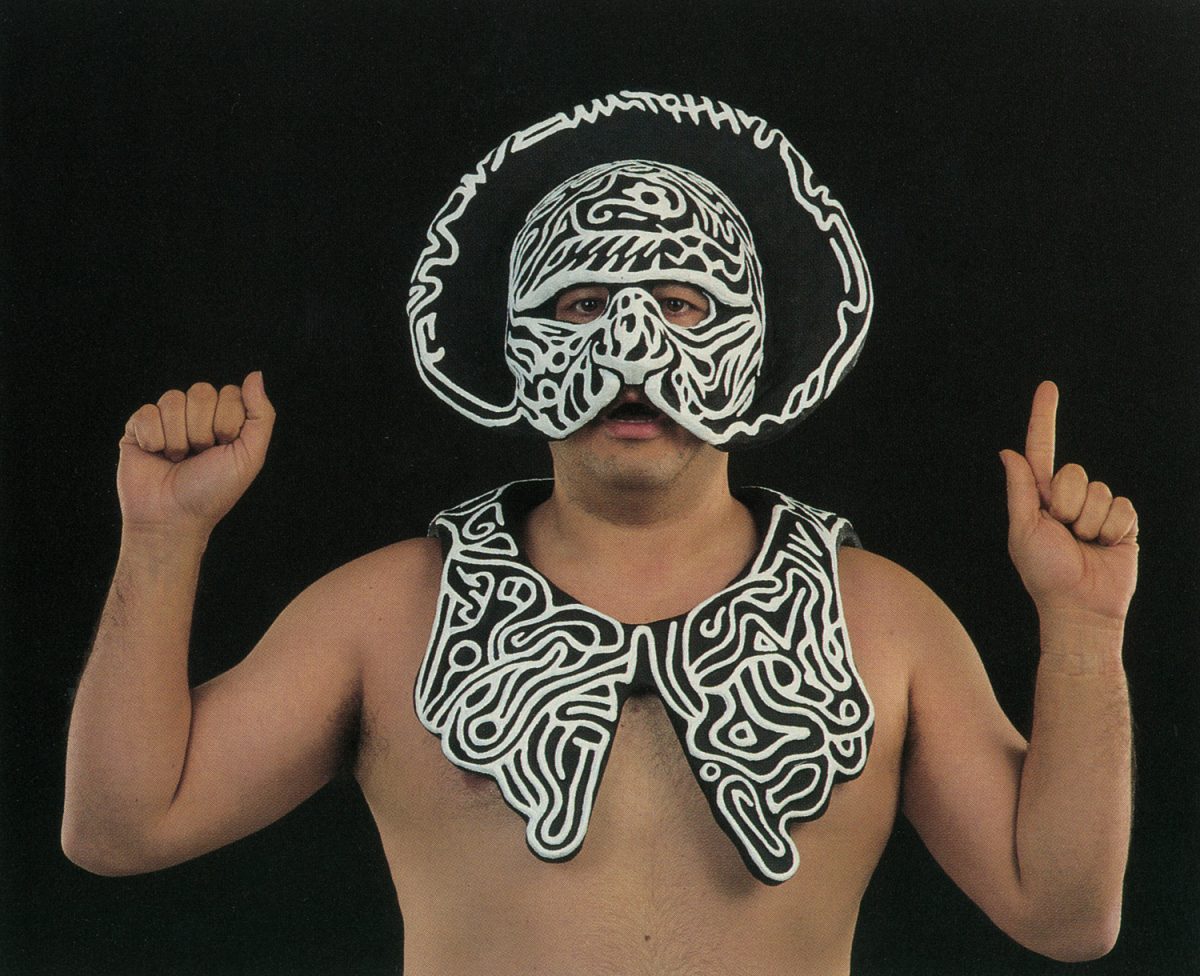 Ultimately, I will discover it is Alex Caldiero, himself, making all this racket — on a video playing over a TV near the gallery entrance that someone has punched on and left running, perhaps for my benefit – and it really ticks me off.

Caldiero is onscreen smoothly daubing at a small border with something that resembles watercolor – in Krishna blue – just painting away and whistling – while I am attempting to write, for chrissake, and DISCUSS HIS SHOW and he is PROVIDING BACKGROUND MUSIC, MAKING NOISE SO I CAN’T CONCENTRATE ON WHAT I AM TRYING TO DO . . . I can but settle in and watch him paint those gentle blue strokes around his words while he softly whistles something lovely and I FINALLY, finally realize how fortunate I am to have this artist provide much-needed accompaniment to his show which was up-until-then practically perfect in every way — and now is utterly so.

The Baggage experience is complete.

One would think that sort of spooky but most welcome add-on thrill couldn’t occur as readily with the equally brilliant (and SO brilliantly colored), lavishly illustrated catalog to the show, but you might try Tibetan monks chanting or “1000 Airplanes on the Roof” by Philip Glass. And silence is always good. 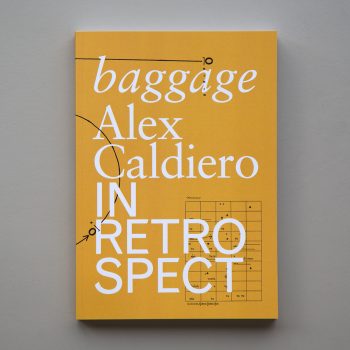 The catalog includes essays by scholarly Caldiero friends and fans that will put you directly on the BEAT-en path: Scott Abbott, author, translator, professor of integrated studies, humanities, and philosophy at Utah Valley University brings us the titular Baggage essay – it’s as rich and lovely and full of detail, direction and misdirection as only can come from someone who has written about this artist and his performances for three decades; Laura Allred Hurtado, executive director of UMOCA, reveals the biographical Caldiero in an awe-inspiring manner; Scott Carrier, independent writer and radio producer, takes us along to a Caldiero reading event in the southern Utah desert in his essay “This Is Not It”; USU prof Tyler Chadwick wrote his dissertation on Sonosophy and presents the interesting and very digestible “A Poetics of Breathing: A Sonosophic Essay on Alex Caldiero’s Sonosophy”; Craig Dworkin, author, University of Utah professor and editor of eclipsearchive.org  – an online archive of innovative writing – also addresses sonosophy in “The Bones of Birds are Pneumatized”; noted Utah filmmaker Trent Harris (who involved Caldiero in the cult film “Plan 10 From Outer Space” among others) writes a fine tribute to him; no bio is given for New Yorker Richard Kostelanetz, 81, who writes the introduction, but Britannica calls him “an American writer, artist, critic, and editor of the avant-garde who is productive in many fields.”  His mind-expanding contribution is priceless, dating back to the beginning of Caldiero’s career and includes early examples of comics, poems, and other ephemera; and poet and journalist Stefene Russell in her essay “The Food That Fits the Hunger,” sums up Caldiero’s work as something of a magical device, an “object that contains tappable energy, a sort of mystical power station.”

Most importantly, Caldiero writes of himself and this show: “Even though I’m not a painter, I paint. Even though I’m not a musician, I do music. I’m not a dancer, but I dance. This search, this hunger has given me the boldness to not care about those aesthetic delineations and concerns in order to get at this thing.  . . . This show has given me an insight that I will continue to explore.”

Exquisitely placed in vibrant, psychedelic order, edited by Laura Allred Hurtado and with art design by Zachary Norman, this book-that’s-beyond-a-catalog: Baggage: Alex Caldiero in Retrospect is limited to an edition of 300 numbered truly-difficult-to-put-down copies.

Baggage: Alex Caldiero in Retrospect, Utah Museum of Contemporary Art, Salt Lake City, through June 19. The catalog is available at the gallery gift shop or by mail.