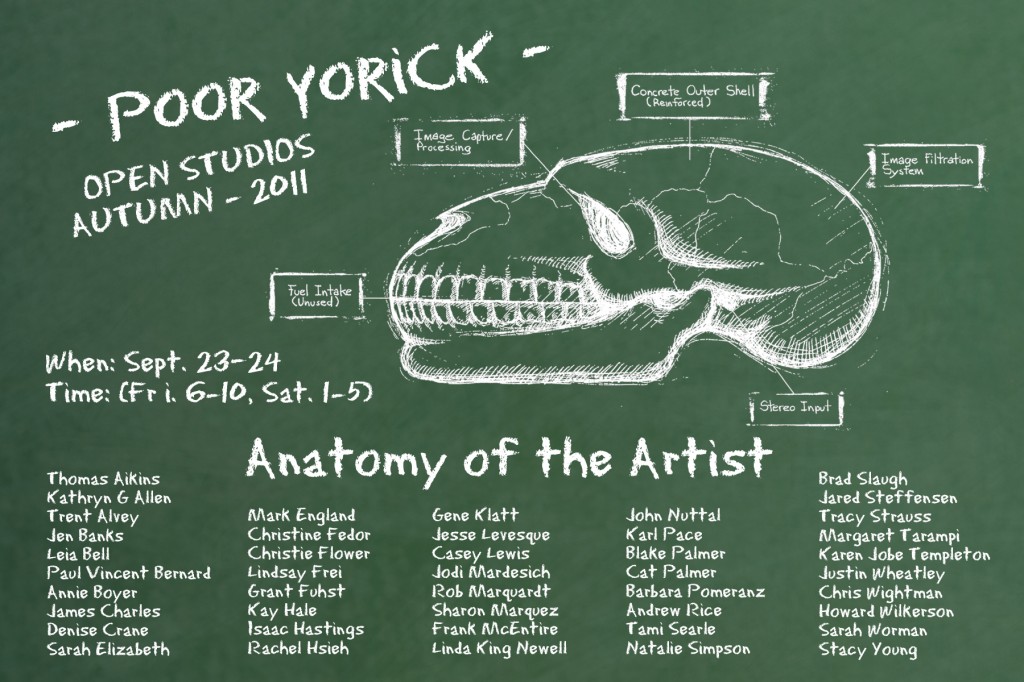 Poor Yorick Studios’ semi-annual open house is this evening, the best chance to catch tons of art in its natural setting. The usual convival spirit is what attracts people to the opening every six months, but to keep things fresh Brad Slaugh and his forty or so cohorts like to add something new to each opening.

For the Fall Equinox Open Studio (Fri. 6-10, Sat. 1-5) Isaac Hastings brings the Knot Art Project to the south side artists’ warren. For this project each artist created a work of art by starting with a piece of book matched wood (knot art). Like a Rorschach test the artists individually interpreted what they saw, what it meant, or how it made them feel. The results, in a variety of media and by artists Isaac Hastings, Evan Jed Memmott, Trevor Dopp, Christie Flower, Brian Kubarycz, john Walton, Chloe Alred, Stefanie Dykes, Hal Hogan, Kay Hale, chuck Landvatter, Brain Taylor, Grant Fuhst, Melissa Smolley, Jen Banks, Gene Klatt, and Matt Delporto will be on display.

As always, Poor Yorick is joined in the open studio event by their good friends a block away at Spectrum Studios (196 W Malvern Ave ).

To toast the event Tolchok Trio will be playing in Poor Yorick’s Courtyard on Friday night from 6:30 – 8:30 pm and Amanda Gooch’s Farm Cart will be offering up specialty locally sourced grass-fed hamburgers and old-fashioned-with-twist desserts like fresh peach streusel cake.

This is a Where to Wear event so let’s see those t-shirts. We’ve got some prizes to unload.

Everett Ruess Days
If you’re looking for a little bit of controversy, you’ll want to head down to Escalante for the Escalante Canyons Art Festival in Escalante, September 23-25. Ken Sanders bookshop will have a booth at the festival, with Sanders speaking at two different events on Saturday.

At 3:00, in a talk entitled “Authors Met On and Off the Trail,” Sanders will recall encounters with a variety of literary figures he has encountered over the years, including Edward Abbey, Wendell Berry, Wallace Stegner, Barry Lopez, Terry Tempest Williams, Charles Bowden, Doug Peacock, Gary Snyder, Utah Phillips, Rosalie Sorrels, Katie Lee and others.