Take the best line from each of the ten best poems and print them on this page. They may produce ten splendid images in our minds as we read them, but they will not become a poem, and if they do, it will not have anything like the power of any of those ten sources. The unconnected lines may even clash and diminish each other. The question I found myself asking at salt 1, Adriana Lara’s exhibition—part of the Las Artes de Mexico at UMFA this summer—is whether a roomful of art works, no matter how thematically related, can do what those ten sentences cannot: become a single work, as the label ‘installation’ implies.

It should come as no great surprise that an artist from Mexico City, like Lara, or for that matter from L.A., Chicago, or New York, is likely to have a much different way of coming to art than the approach of so many Utah artists. The revolutionary subversion of mainstream art began in the late 19th century at precisely the time when the LDS Church was sending amateurs to Paris to become traditional masters. Subsequent events have done little to shake the overwhelming loyalty of the Utah audience to the tradition of image-making that is representational, narrative, and largely unacquainted with the grown-up facts of life. So the question at hand is complicated by our broad unfamiliarity with many examples of recent art, especially with forms like installation that for both theoretical and practical reasons tend not to travel, but must be produced locally, like milk and snow. 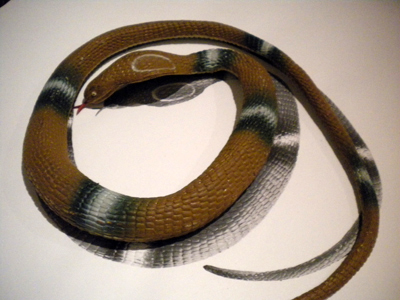 Meanwhile, in Utah even those of us without pioneer ancestors can hardly overlook the abiding authority of past generations or fail to see that a place in the conversation requires measuring the distance between a personal opinion and general sentiment as carefully as a street address scales proximity to the Temple. In this context, an artist, like anyone else, is respected for what she has done in the past. Yet in the wider art world in the last half-century what an artist has created has become less important than what it says on her CV. Adriana Lara’s Mexican origin gives her third world credibility, a vigorous language culture, and connections to a large and enterprising US minority. In place of a degree in drawing or painting, she has collective art projects, including Pazmaker, a free-form publication (its title invokes, among other things, the Colt Peacemaker, ‘the gun that won the West.’), an artist organization called ‘Perros Negros,” or Black Dogs (a potent symbol of death and evil, and consequently the most-often euthanized stray animals), and Lasser Moderna, an experimental music ensemble. Locations range from Paris to Puerto Rico. Today’s polymorphous artist is also writer—or at least editor—as well as engineer and musician. Why not? Leonardo designed flood control systems while Michelangelo wrote poetry and built Saint Peter’s. Who’s to say where courage becomes audacity? 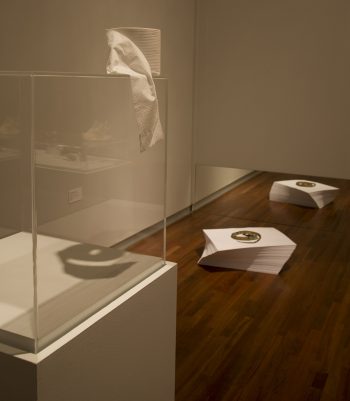 Theoretical issues aside, how does the work measure up? Lara flirts with the conventions for an exhibition, including pictures on walls, large objects on pedestals, and ‘vitrines’ (glass boxes) for smaller objects, but her choices consistently subvert these conventions. One vitrine proffers a roll of toilet paper. It’s an ordinary, mass-produced commercial product, though it is beautifully displayed, with a curl at the loose end that spirals lyrically down beside the vitrine. Oh, yes—it sits on top of the vitrine, not inside it, and viewers must decide if it was left there accidentally or to petition entree to the space of honor. Another found object, “Abandoned Luggage,” is an off-the-rack suitcase except for its placement in about the only way a suitcase would never be put deliberately. Such stunts have become as conventional as the art they sought to replace in the century since Marcel Duchamp hung paintings in the dark and gave viewers flashlights to see them by. Meanwhile, anyone who’s seen a PG-rated movie or a cable TV show lately may ask what oppression this is supposed to confront and defy. The process of shattering rules and shocking innocent viewers has long ago exhausted the supply of both. 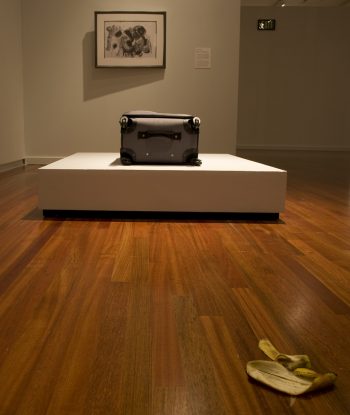 What’s left, for those who think art must always be the revolution it began to see itself as during the 19th century, is to tweak what have become clichés, hoping to make them fresh or personal. Of course that is also what most artists have always done. At her best, Lara is wickedly subversive, like when she throws a banana peel on the floor: Russian roulette meets slapstick! Most of her works at least de-synchronize perception and subversion, which is to say they present a second assault beneath the first, obvious one. A (rubber) snake casts an ominous shadow, but on closer inspection that shadow is a black-and-white photograph of the sinister toy. What do you get when you Xerox a fake snake? But to accept that such japes belong in the museum, we have to accept some philosophical ideas that academics have convinced themselves are brilliant and insightful, but that most of us have long since gotten over. I may not be able to explain how Achilles overtakes the tortoise—despite Zeno’s explanation that it’s impossible—but I overtake countless things without troubling myself. And if you ask me why Mona Lisa’s familiar mug is in the Louvre’s gallery and the no-less familiar T.P. stays in the washroom, I’ll tell you it’s because that’s how most of us want it. It’s not that art is or isn’t a good place to talk philosophy, or has something more worth doing. It’s that art that only questions art has already eroded its credibility. Twice. Meanwhile, as for ‘old-fashioned art,’ no one has yet succeeded in creating a work that invalidates art’s history. There is no (theoretical, non-commercial) reason why art cannot, or should not, continue to do everything it’s ever done, except perhaps destroy itself.

salt 1: Adriana Lara, part of the Artes de Mexico exhibition, is at the Utah Museum of Fine Arts through September 26.