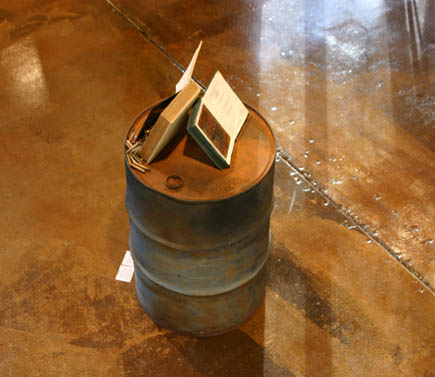 In December, Deseret News art editor Dave Gagon wrote on the Springville Museum of Art’s annual Spiritual and Religious Exhibition. In the piece, Gagon mentioned “Improper Use May Result in Injury or Death,” a work by sculptor Adam Bradshaw that was pulled from the juried exhibition and which is currently on display at Palmers Gallery in Salt Lake City.

Bradshaw is a student at Utah State University who has already been recognized for his work at statewide exhibitions. The Springville show gave another piece he entered an Award of Merit.

“Improper Use May Result in Injury or Death,” consists of two books on top of an oil drum. The books are placed back to back and most viewers see first the one and then the other, rather than the ensemble. One book is a hollowed out King James Version of the Bible with bullet casings and remnants of a flag spilling out from inside. The other book is a copy of the Koran, published in New York. It too is hollowed out and contains what looks like a bomb. Bradshaw says that he was told by Museum director Vern Swanson that the piece was pulled from the show at the request of the museum’s board of directors. “The explanation that I was given was that they (the board of directors) felt that the piece was disrespectful of the Islamic community, and that I did not have permission to use the Koran in the manner in which I did.” 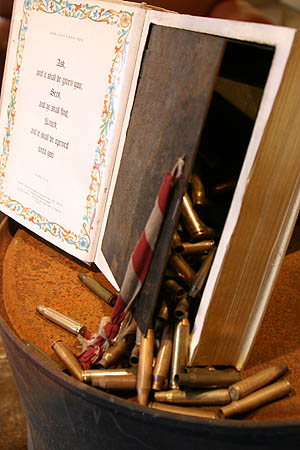 Swanson is careful to point out that the piece was not actually juried into the show. “As a part of the jurying process, if a work of art is questionable on grounds other than aesthetics we poll the Board for their acceptance of the work of art,” Swanson said. “In Adam’s case the jury [myself as one] liked the piece but saw that the work might be offensive to many…Jews, Christians and Muslims in particular. So, according to our ‘Community Standards and Values Document’ I was obliged to contact the Board for their input during the jurying process. Ten of the thirteen members of the Board came and seven strongly objected to the work.”

Swanson notes that the decision was not made because the piece was not good. “Everybody agreed that Adam’s work was of fine quality and that he did not mean to create dissention. We all loved his ‘message’ and believe that it was good and right. Perhaps in ‘going after’ the idea, maybe tunnel vision occured…we certainly don’t blame the artist of any malicious intent. But here was the problem. The work of art took two sacred items, a real Bible and a real Koran, cut the insides out of the two books. This is the only reason we chose not to exhibit the piece.”

“The idea of putting bullets in the Bible and a bomb in the Koran was brilliantly evocative,” continues Swanson. “But as you may remember a US soldier kicked a Koran under a bed in Guantonamo and one person died. A false report in the New York Times about flushing a Koran down a toilet caused 17 people to die in Iraq. Muslims are very careful about how they treat Holy Scripture, as are many Christians. If the assemblage piece had been a sculpture or painting of the Bible or the Koran, there would have been no objection, but to cut pages from these books with a knife is not acceptable to the Museum.”

Palmers Gallery has had the piece on display since December. Gallery director Shawn Stradley says that the response to the piece has generally been very positive. “People have found it very thought provoking and have enjoyed engaging in the dialogue it creates.” He has not had anyone outrightly complain about it, though he does it admit that there is a minority of people who simply choose to avoid the piece. One of those was his own aunt. She attended an opening in December and when Stradley asked her what she thought about it, she replied “I don’t want to think about it” and refused to discuss it further.

Stradley has agreed to keep Bradshaw’s piece installed through February 15th. You can see it at Palmer’s Gallery. And if you have comments on the piece or the issues raised by it, post a comment in the 15 bytes section of our forums section. 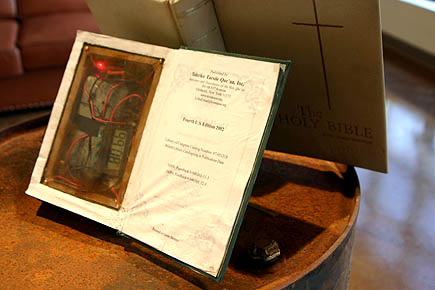