This month the Springville Museum of Art presents the work of the Hudson River Fellowship, a group of artists devoted to investigating the nature of landscape by revisiting the 150-year-old artistic tradition of the Hudson River School. The exhibit, which includes work by Utah painter Ryan S. Brown, is a documentary examination of the work of the project in progress: an intensive curriculum allowing the artists to revise and replicate with integrity this first American art tradition.The Hudson River School is the historical moniker given to the 19th-century artistic movement that centered around Thomas Cole and Frederic Edwin Church and was inspired by the Barbizon school in France and the poetry of American contemporaries Henry David Thoreau and Ralph Waldo Emerson. They were pre-Impressionistic artists who concentrated on the grandeur of the natural world, with attention to detail and naturalistic coloring. The founders of the first native tradition in painting, these artists were painters of discovery, exploration and settlement of the American frontier. One hundred and fifty years later, the Hudson River Fellowship, started by New York artist Jacob Collins, attempts to “build a new movement of American art, modeling itself after the artistic, social and spiritual values of the Hudson River School Painters.” The artists of this new movement are themselves explorers, seeking to reanimate the integrity of landscape painting, revered in the 19th century for its capacity to express grandeur and sublimity. With full integrity and analytical perspective, the Fellowship has established an academic program to examine the aesthetic fullness of the original movement, whose qualities have not been thoroughly explored since the 19th century. 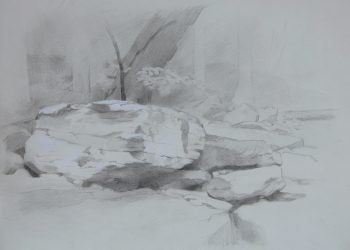 Each summer for the past three years the Fellowship has gathered in the Catskills in upstate New York to pursue their common interest: the revival of this 150-year-old tradition and its incorporation into the contemporary artistic vernacular. The artists deconstruct principal elements of the original Hudson River School paintings and analyze these elements according to three areas of study to, in turn, construct the natural aesthetics with the aims of the original School. Field studies, theory, and studio painting are all utilized to arrive at the final result that is hoped to perpetuate a renewed interest and ignite an invigoration and new integrity for landscape painting.

Brown and his fellow students spend a considerable amount of time in the Catskill Mountains in field studies, sketching, drawing, and analyzing natural forms intimately, a methodology whereby these artists working academically hope to capture the fundamentals of the environment. The pencil studies, tonal studies and plein air oil sketches can all be viewed at the Springville Museum. Brown studied at the Florentine Academy and, like a Renaissance master, his initial sketches and drawings form an essential element leading to a final result. He is discovering laws of aesthetics that regulate how the original artists of the Hudson River School handled basic principles through myopic articulation of natural elements. In Brown’s studies one can see the minutiae and baffling detail that he has re-created while sojourning in the Catskills.

The second major component of this New Hudson River School of painting is a rigorous and thoughtful study of theory, enabling these artists not only to see the landforms with their eyes but understand them with their minds. They begin with an intensive art historical study to familiarize them with the manner of the original artists of the Hudson River School. In a very classical manner, the artists learn the essence of what they are seeing. Like an academician who studies Raphael, the artists learn not only surface appearances of form but principles that explain how natural elements are affected by light, perspectival construction, color and tonality. This is not a half-hearted approach to painting: in addition to studying the fundamental scientific principles that compose the forms they are articulating, the painters also receive instruction from professional botanists and geologists.

Evidence of this rigorous and thorough study of nature and theory can be seen in the small-scale oil paintings on display at Springville. In one, viewers might see how light pierces the dense foliage of a forest, or in another how the water is rendered to flow in a stream meandering along a rocky path. 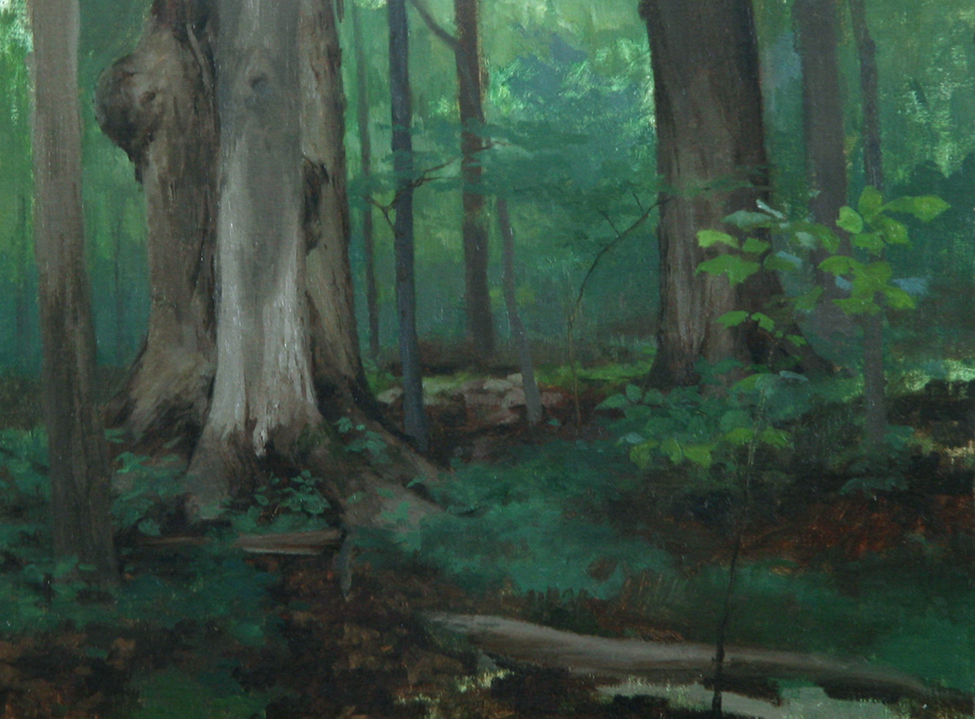 A third component of this rigorous course of study is a holistic synthesis of accumulated learning brought into the studio for untold hours of intensive painting. Learned elements are galvanized in large- scale canvases to bring together those qualities that have been assiduosly studied. The brush is brought to the canvas and the artist uses the preliminary drawings, the studies, and theory to address compositional factors that will ultimately lead to a final landscape that resonates with the original School. Brown’s large-scale “Kaaterskill Clove,” which greets the visitor at the entrance of the exhibition, is a marvelous compositional experiment that justly calls forth its predecessors. It leads the eye through the painting, adding a sense of volume, opening up the space or closing it off to the viewer’s eye.

The visitors to this exhibit will be able to examine all phases of the Fellowship’s program of study permitting them to follow the curriculum that leads to the finished product. Preliminary drawings are plentiful and the viewer will find in pencil how the artist challenges aesthetic limitations and finds aesthetic solutions. The show is also replete with small theoretical studies as the viewer sees what the artists saw in the Catskills on a path to discover the means by which Cole or Church may have handled certain aesthetic effect using artistic theory. And finally, in the classical manner, we see monumental compositions.

These painterly techniques establish a higher standard for the artists involved in the project, challenging them through intense effort, to reach a final artistic goal and philosophy. According to the Fellowship, they “will bring together the reawakening enthusiasm for the old American painters, the vigorous but unfocused scene of contemporary landscape painting and the urgent need for a renewed reverence for the land. By bringing back the skills and spirit of the pre-impressionist landscape painters the program will give much needed direction to a new generation of painters.”

The Hudson River Fellowship will be on exhibit at the Springville Museum of Art through Oct. 16.