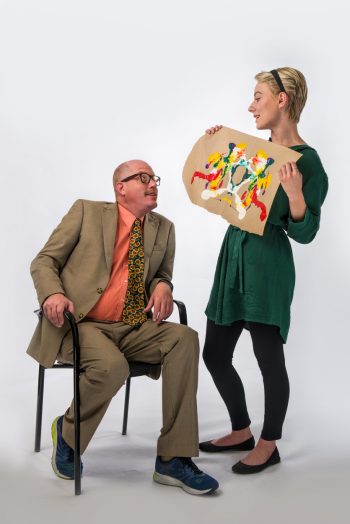 Lane Richins and Kaitlin Lemon in Pygmalion’s Tigers Be Still

There’s nothing funny about depression — ‘tis the season for an onslaught of the crippling mental illness in Utah, a state whose residents statistically are particularly prone to it. (Perhaps it’s more prevalent here during Pride than Yuletide?) That said, Pygmalion Productions is presenting an adult contemporary comedy about a goodly number of characters caught in its grasp – and for reasons that eventually add a necessary piquant balance to all those lines that make an audience chuckle.

“Tigers Be Still,” billed as a comedy about depression, is a rewarding production: combining spot-on casting with a fine script by Kim Rosenstock, it is insightfully acted with costumes, sets and lighting that nicely serve to enhance the whole.

Sherry (played by an effervescent and perfectly cast Kaitlin Lemon) has a newly minted MFA in art therapy and a position at the local high school through her bedridden mother’s intercession with an old boyfriend — now the principal there (the familiar Salt Lake City actor Lane Richins in another gifted performance). Sherry has taken it upon herself (now that she’s bootstrapped her way up from depression) to get her depressed sister, Grace (Liz Whittaker, in a memorable performance — attired in dirty PJ bottoms and a Picattso T-shirt), off the sofa and the Jack Daniels; their equally depressed mother out of the locked upstairs bedroom; a couple of undoubtedly depressed Chihuahuas out of the padlocked closet downstairs; and the disturbed principal’s son Zack (Jordan Briggs, who looks to be about 15, but acts as compellingly as anyone with a long-held Equity card), out of his mother’s shoe closet while she’s about it.

Then there’s the dangerous tiger that escaped from the local zoo still at large. Shivers!

All of this is under the more than capable direction of Elizabeth Golden, a Utah native and UVU grad who received her MFA in acting from the Royal Birmingham Conservatoir in the UK and who also has a one-woman show (“Do You Want to See Me Naked?”) headed to the United Solo Festival in New York City next month. PYGmalion Theatre Co. draws a top-notch cast and staff.

The play opens on a perfect three-part set by Thomas George who teaches at the U of U — a central living room and sofa strewn with a pizza box, lone sock, papers and other junk; a group of empty frames hanging on a gray wall is a nice touch; elsewhere several chairs surround a table that is a dining room in another home; and a narrow table with a side chair that serves as a school office sits off to another side. U Assistant Professor Michael J. Horejsi created the lighting design that adds so much to the changing atmosphere. The stage manager is Westminster College’s Emilio Casillas, also the production coordinator for the NOVA Chamber Music Series. Mikal Troy Klee has been creating SoundScapes and Projections for PYGmalion Theatre Company since 1998. 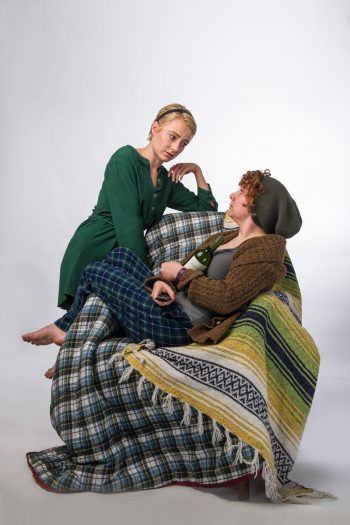 “Tigers” contains language some might find objectionable — even a word this usually unflinching writer could have done without — but it’s all delivered in context. There’s a plethora of witty dialogue, too, and the cast does a remarkable job of remembering it all. Only problem on Sunday afternoon was with the sisters, who on occasion were required to adjust something behind the couch or to pull an item from a box on the floor and words were lost to the audience in the process. That could presumably be mended with slightly different stage direction or by speaking louder or slower.

Should you be prone to the winter blues or worse, and can get yourself to leave the house, “Tigers Be Still,” might prove a good remedy. If that doesn’t do the trick, Squatter’s is directly across the street. (I know, I know . . .)