A Rain of Discord: The 2015 Utah Statewide Annual 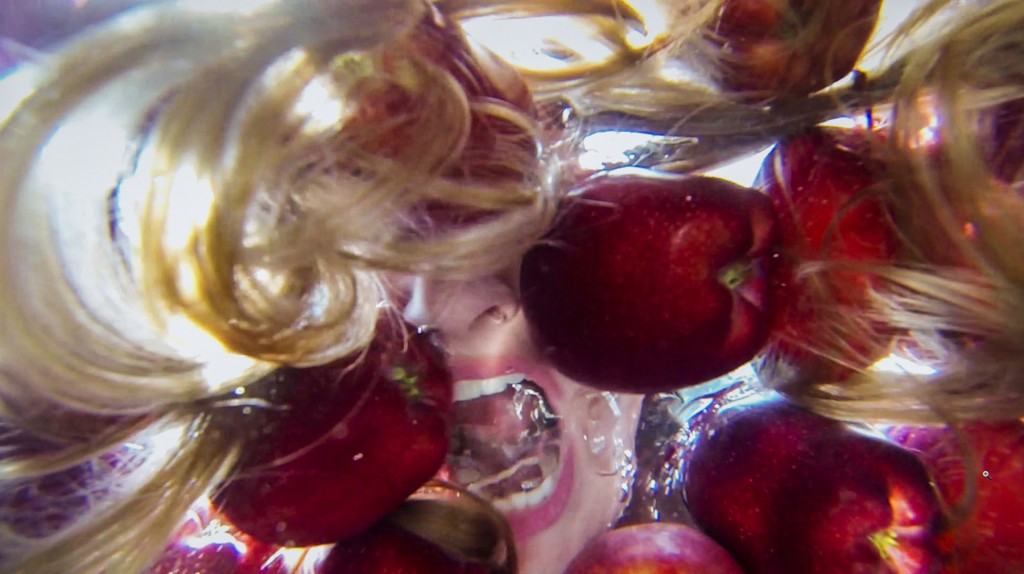 Amy Jorgensen, “Far From The Tree”

One of the Old World’s grand definitions of art—that art is craft in the service of inspiration—seemingly went out of service when fashionable insistence by artists on absolute creative freedom trumped the audience’s taste for demonstrations of skill. But the pendulum continues to swing, and ironically enough, new, more sophisticated media intended to give artists ever more freedom, such as video and the use of computers, have paradoxically re-imposed discipline on the process of making art. The Utah Division of Arts and Museums’ Statewide Annual Exhibition has responded by adding video and computers, wherein precision of execution is as vital to the finished work as its content, to the photo and crafts segment of their rotating exhibition categories. 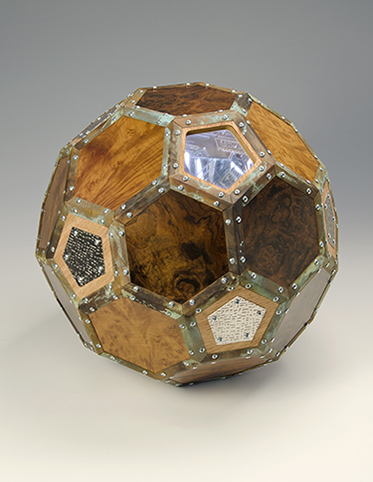 John Tavoian demonstrates this renewed importance of skill with “Dissonant Introspection,” in which a slyly punning title accompanies necessarily precise implementation. The work begins in visual play, being about the size and shape of a soccer ball, which its geometric form—technically a truncated icosahedron—duplicates. Here, though, each hexagonal face displays an exotic hardwood, each pentagon (but one) features a metallic texture, and the edges are covered with mitered metal strips held in place by screws. Off-the-shelf hardware contrasts with the patinated brass, even as these industrial finishes sound a complex chord with the wood. The one open face confronts viewers and invites a closer approach to look within, whereupon the show starts. A mechanism filling the interior whirls into motion, music-box hammers producing loud, discordant chimes. At the same time, lights come on to reveal a mirrored interior, so that an apparently infinite space, filled with an equivalent number of spinning gears, whirling wheels, and pounding hammers becomes visible. The view intrigues, but further exploration is stymied by the realization that the face at the window is causing the commotion. Introspection leads to dissonance. Philosophically speaking, it’s art as sharp as Occam’s Razor.

Such discomfort feels entirely appropriate to our historical moment, and whether we enjoy it or find it distressing, the presence of innovative media primes the gallery to produce it. An artist may choose to exploit this unfamiliarity or seek to ease it somehow. “Dissonant Introspection” does a little of each, its humor balancing the potentially nightmarish implications of its Tardis-like interior full of mad machinery. Other artists make other choices. In approaching the landscape, Utah’s most popular subject, Brian Patterson uses high-definition video, soft focus, and generally smooth editing in “The One” to generate a sense of the rightness of nature’s unfolding through limitless time. Whether spiritual calm makes responsible preaching when half the world’s trees have been destroyed, and the rest are in imminent danger, remains to be seen; those who ask the question are likely to agree on an answer, while those who disagree may answer the question by not asking it. By comparison, Anna Laurie Mackay’s exquisite confections of photo letterpress, hand weaving on silk, and tissue paper eloquently express both how the living world feels and how it actually is. The living things she shows belong to a woven fabric as fragile as it is ineffable. “Ohio Blue #1” graphically locates life atop a weave as complex and interlocking as the real network that sustains it, standing on the compound feelings and desires it engenders in those who dwell with it. In “Heirloom #1,” the circle both invokes nostalgia and suggests a portal into another sensibility. Hanging next to them, as if to complete a triptych that spans two artists’ sensibilities, Jordan Layton’s “Untitled No. 2” uses six Polaroid emulsion lifts in a collage of perspectives reflecting the compound nature of truth. These are not new ideas, but new ways to rekindle awareness and feelings that may otherwise fade. 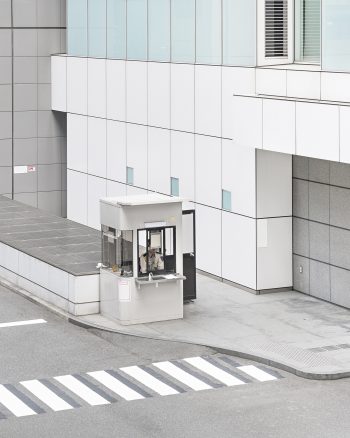 In theory, the Statewide Exhibition cycles through each medium once every three years, but in practice the criteria are broadly drawn, so that most arts could qualify in several years: the seven clay artists on display could have entered last year as sculptors and again this year in crafts. One way of telling a craftwork from a craft-inspired artwork is to check the title. Even though Susan Harris’ ingenious “Three Sided Jar,” with its architectural conceit, promises plentiful aesthetic pleasure, her descriptive title suggests she considers it functional. Juanita Marshall, on the other hand, probably meant her “Morning Meditation (Everyday Altars),” with its appeals in equal parts to child’s play and serious magic, to be contemplated more often than drunk from. Use of a title to distinguish a rhetorical statement from the generic photograph it could have remained also occurs in Daniel Everett’s satirical shot of a parking booth fronting an anonymous building. Its title, “Throughout the Universe in Perpetuity I,” invokes an increasingly common, grasping legal invention that strives to turn personal privacy into commercial property without compensation. 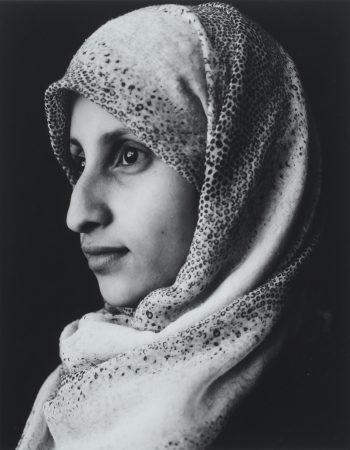 In general, this year’s exhibition differs from three years ago in the added presence of video and computer art, but not all differences are generic. Back then, Martha Diaz Adam’s photo portrait of Libyan immigrant Omima Khalat, a young woman in a headscarf and three-quarters profile that emphasize her large eyes and prominent nose, might have been taken for nothing more than a study of an ethnic type. Today, however, the firm resolve visible in her indirect gaze feels vulnerable, and cannot dispel concern for the future of this socially and politically active student in the face of resurgent American racism. Three years from now, such a “portrait” may have learned to display her substantial social-media footprint, possibly the largest of anyone connected with this exhibition. 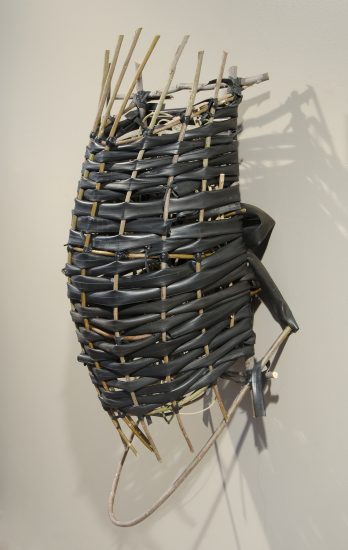 Computers and video cameras—especially the cell-phone versions found in everyone’s pockets these days—are changing art along with everything else. Yet John Christopher Wallace’s “Subway” makes the case that there’s not much these new media can do that old-fashioned tools, like scissors and glue, powered by imagination, cannot match. A distant cousin to Peter Blake and Jann Haworth’s 1967 cover collage for Sgt. Pepper’s Lonely Hearts Club Band, “Subway” captures the nervous, discombobulating experience of working-class mass transit by building up an image from dozens of found pictures, employing devices like vanishing-point perspective and overlap known since the dawn of the Renaissance. Lapses of logic the eye detects are smoothed over in the brain the way we willingly turn the succession of still images in a film or video into the illusion of continuous motion. Other distinctions broken down here include the way Heidi Moller Somson’s bicycle inner tubes and Carol Sogard’s plastic bags transmogrify trash, from global curse to yearning promise.

To varying degrees, all art exploits pre-existing cultural experience, and the best art makes fresh and vigorous use of universal references. Kate Ericson and Mel Ziegler, showing at UMOCA, borrow such mundane fixtures as flags, door mats, pet toys, and canning jars to make powerful statements about life and death. Amy Jorgensen works in deliberate series, each of which employs particular materials and techniques: marshmallows are bitten, then mustered in ranks; photographs mimic crime scene snapshots; images of historically significant women become textiles in the timeless manner of women’s crafts, but blueprinted like patterns to be followed. One series that stands out centers on apples that she variously menaces, attacks, and often destroys, while in another she makes photographs without a camera, using film worn under her clothing and haphazardly exposed by her daily activity. Such works depend on the sort of external rationalizations—usually posted texts—that became fashionable among academic artists a few years ago, and also on commonly shared reactions to each subject. Some of the apple works are witty and border on brilliant, such as “Ten Second Apple,” in which Jorgensen mimics eating an apple in a photo booth while machine-timed exposures force her to consume the fruit with charming, self-mocking haste. Others, like “Marshmallow Test,” are arguably less successful alongside the original material they satirize, but are part of a trend toward art that exploits science’s visual impact while missing out on its rigor. There’s also the danger that subjective descriptions may sound like compulsory instructions: telling viewers what they should look for and find in the works. Still, “Far From the Tree,” a high definition video of the artist bobbing for apples, seen from the apples’ point of view, was chosen, not without reason, as this year’s “Best in Show.”

Most Americans have bobbed for apples at one time or another. For some, evidently, ducking one’s head under water proved traumatic. “Far From the Tree” counts on the response of this audience, generating commentaries in which the artist and her enthusiasts find a metaphor for waterboarding, a popular means by which the powerful gratuitously terrorize the powerless. Yet something like half of all Americans evidently cannot imagine being waterboarded, so much so that they refuse to agree that it should be classified as what it so clearly is: torture. So while it seems a stretch to go from a luminous tub of water, full of gay red apples, blonde streams of mermaid hair, and a comely, lipsticked mouth that doesn’t try very hard to bite anything, to waterboarding, there may be a case for the work’s efficacy after all. The video is captivating, and thanks to the small theater the artist has presciently provided for viewing it, far more involving than the usual gallery presentation on a TV or computer monitor. Yet for, say, a feckless, un-athletic youth in love with the solitude he found underwater, for whom bobbing for apples was that rare game he could win, no mere page of overwritten comparisons has any hope of making an arbitrarily negative linkage, however worthy the effort.

At the same time, the photographs Jorgensen calls ‘the Body Archive’ can be more beautiful and far more unsettling. ’02.19.13’ (titled by date) constitutes a highpoint in a body of work that never has been less than compelling. Appearing like a hole blown or burned through a protecting wall, bounded by an aureole that ranges from red and orange, through pink and purple, to a blue zone inhabited by perplexing surface features, the void beyond beckons with the ambiguity of a happy death. Furthermore, searching in the mind for analogs or lensless image sources beneath the artist’s imagined clothing leads to fully-formed erotic collisions with oneself, replete with mystery, fear, curiosity, and the complete complement of positive and negative sensations that float subliminally beneath the surface of the psyche.

There’s always more in the gallery than can be captured in words. Julie de Haan’s “Magellan’s Cloud” plays with the mirror symmetry of the body, while Nikos Sawyer’s “Crane Chair” combines animal and furniture DNA. Apologies to those undeservedly left out, and hope that the reader will redress this failure in person. 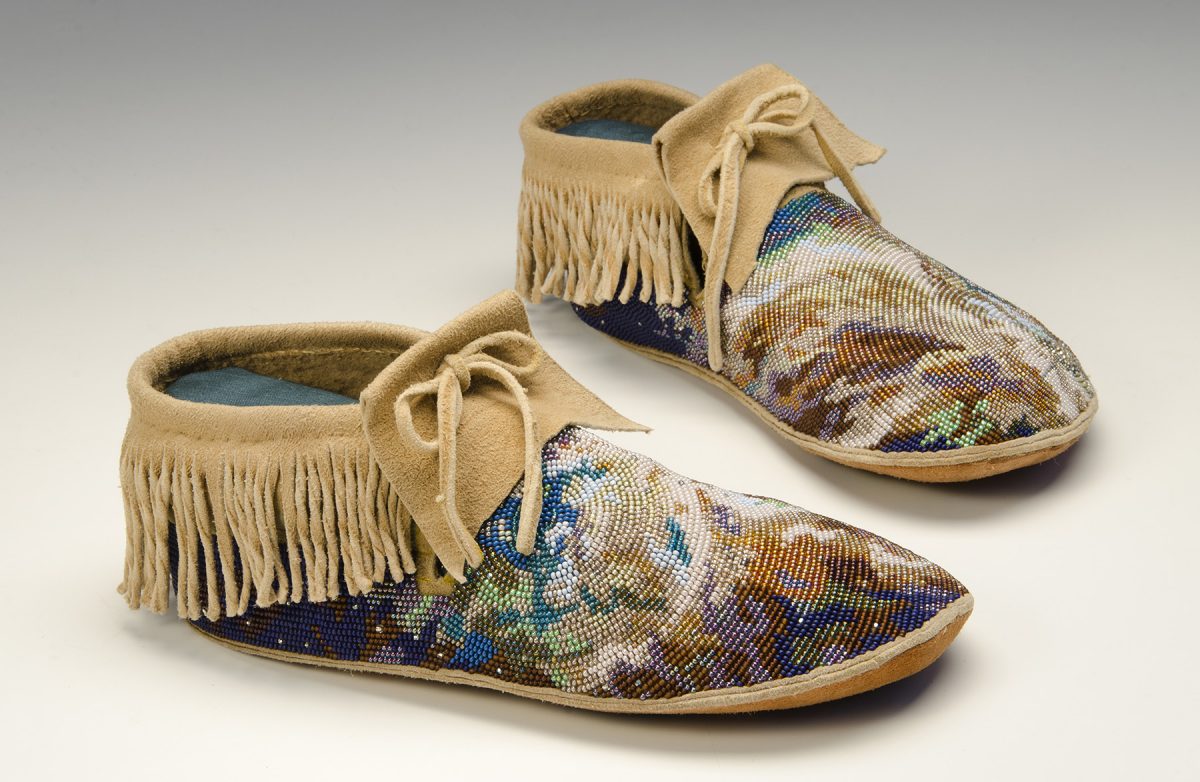