We’ve come a long way from the days when abstract expressionist Ad Reinhardt, famous for justifying his paintings in witty cartoons, explained that a sculpture is something you bump into when you back up to look at one of those paintings. The popular admission of women artists to the gallery has brought a new spirit of comity, where feelings like love are expressed not by an esoteric combination of colors on a wall-sized canvas, but by artists joining together to share their hope that there will be a world in the future for today’s children to grow up in. At Bountiful Davis Art Center, two such artists, Downy Doxey-Marshall and Heidi Moller-Somsen, have collaborated to wrap a promise to nature around a monument to the way we were, but cannot continue to be.

This does not mean the two artists have compromised their unique arts, blended their approaches into a hybrid or that the work of one can be mistaken for the other. After all, these are two of Salt Lake’s hardest working, consistent producers, with more than half a century of gallery presence between them. Each is responsible for the kind of work that leaves a durable mark on the maker’s body and the viewer’s mind, which resists casual change while it assures that paint or clay touched by either will bear marks as distinctive as their fingerprints. 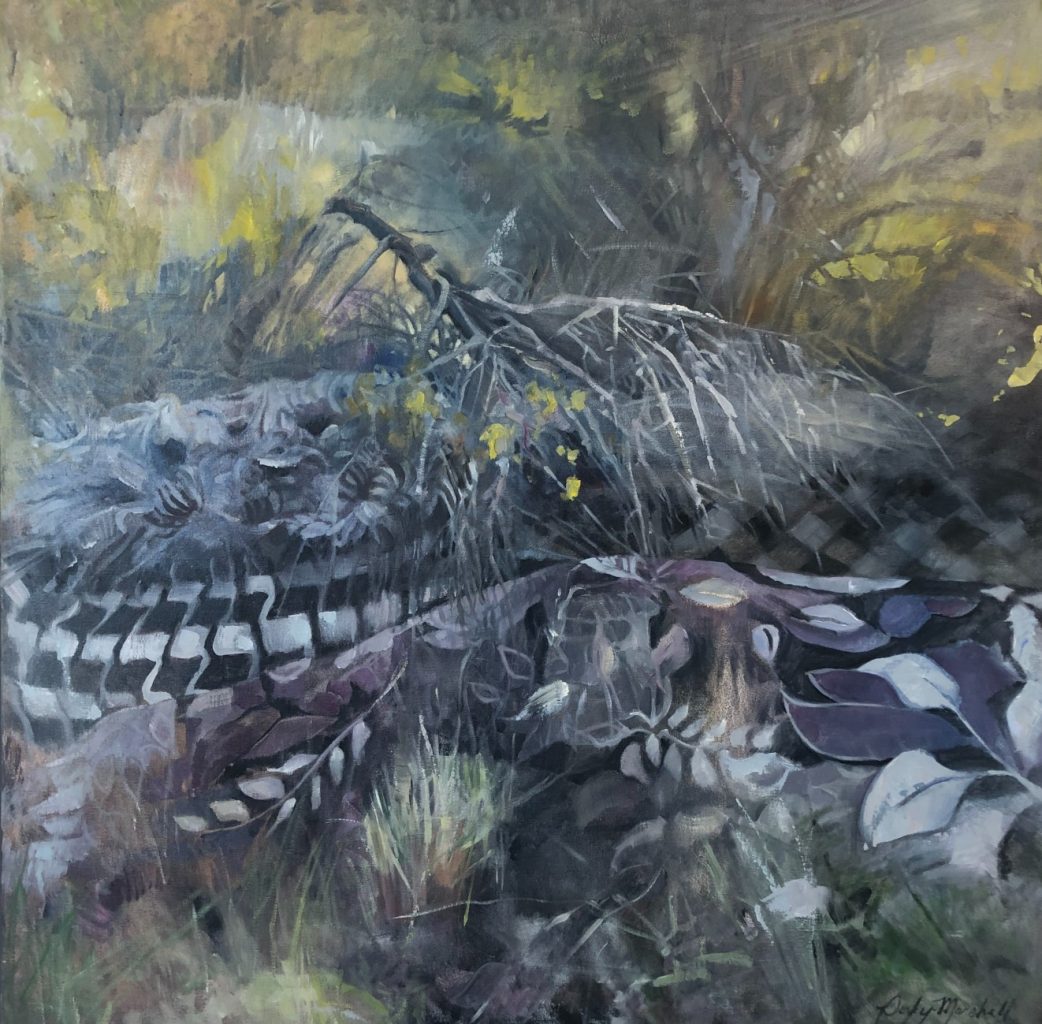 What Moller-Somsen and Doxey-Marshall (hereinafter “the artists”) settled on is what amounts to an “installation,” a modern form of exhibition said to have been pioneered by Marcel Duchamp, where the artists create in response to the location where their art will be shown. By their nature, installations are temporary, to be seen in complete form only while the show lasts, and then to be dispersed. They were able to request and be given the side gallery at BDAC, a rectangular and partly enclosed space with the proportions of a medium-sized, formal dining room. Within that profile, Doxey-Marshall’s paintings of natural scenes suggest surrounding windows that open on a series of gardens, while Moller-Somsen’s table is laden with ornamental ceramic fixtures, bits of nature, and fragments of many sorts, all laid out around a centerpiece that includes two fabled symbols of exploration: a boat nestled on a camel’s saddle. Both artists include things that shade subtly into realms of mystery.

Before reaching the gallery, observant visitors will have been alerted to the sensibility to come while passing through the Center’s entry, where a large vase by Moller-Somsen, about four feet tall, stands as one of two clues. This is “Crypticus Sophia,” a blue-black form with wide, white brush strokes that resemble foaming ocean waves or rising mist, and a pierced top that recalls an incense burner. Its title translates approximately to “hidden wisdom” — specifically suggesting female wisdom, with hints of Gnostic philosophy. Next to it hangs Doxey-Marshall’s painting “Broken,” the title directing attention to a severed branch that has fallen across a circular planter, perhaps made from a truck tire, as though we were looking into a neglected ornamental garden. Together, they invoke a sense of something necessary, essential, but in danger of being lost. 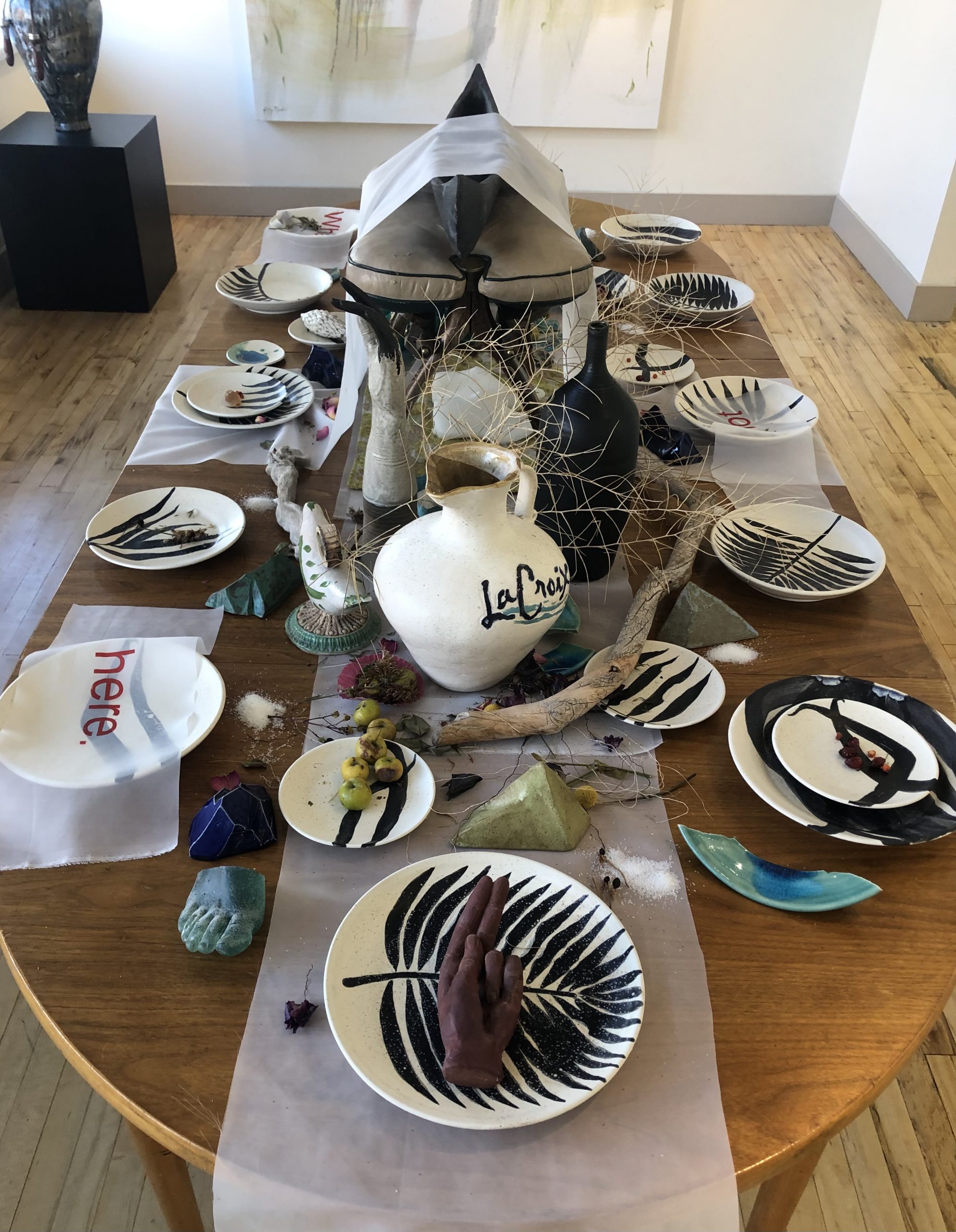 Heidi Moller-Somsen’s “What’s Not Here” provides a centerpiece to the installation at Bountiful Davis Art Center. Photo by Geoff Wichert. 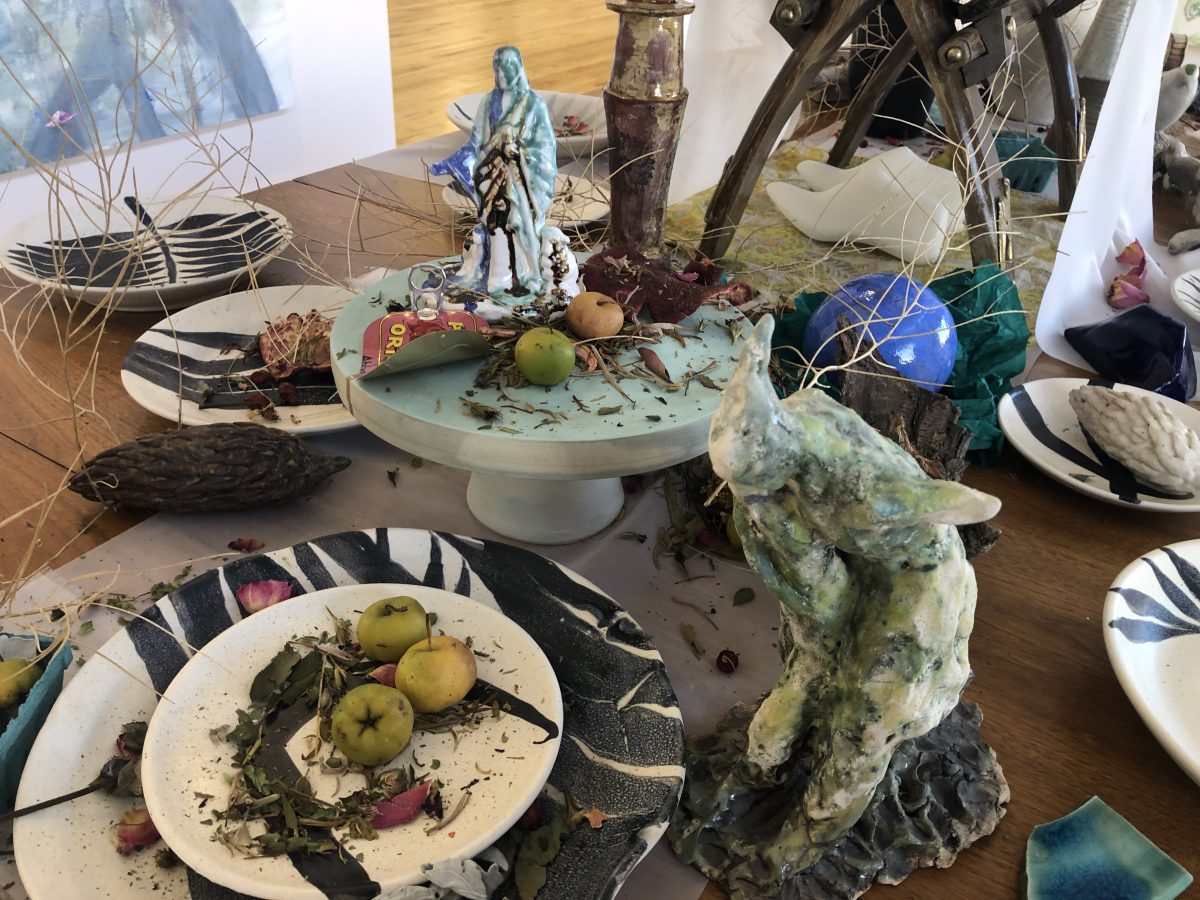 Moller-Somsen’s principal work, set out on a large, oval table, is titled “What’s Not Here.” It’s a conundrum, a question to puzzle over while contemplating all the things that are here, which will summon forth many no doubt personal replies. One thing that’s missing, on a table covered with references, if one pleases, to biology, horticulture, geometry, geography, anatomy, and linguistics at least, is a dinner, whether waiting to be eaten or already consumed by diners, who are also absent. The timing of this event is given on the drape of the table cloth, which reads “The feast isn’t over.” In other words, she presents an event that has been interrupted mid-way through, which hangs on the cusp of some unknown future, with the proviso that what will almost certainly decide how everything turns out is the presence, or absence, and the cooperation, of those who have sat at the table up until now.

Doxey-Marshall’s paintings of nature have a quality she identifies as suspension between the finished look they offer at a distance and the unfinished way she means them to look up close. This is a familiar quality in painting, and has been since the Baroque era, but she intends viewers to desire, even to need, to finish the work in their own minds and eyes — to become artists in their own minds and collaborators with her. She’s also given free rein to her imagination to introduce elements of fabric design, often worked into the plant forms, while at other times, as in “Mabel,” the foliage and the fabric dissolve into each other. It’s as though the view through the window at top is transformed into the curtain at a certain point, a reverse of the way a body of water reflects the sky in the distance, only to become a transparent opening into the pond’s depths closer by. 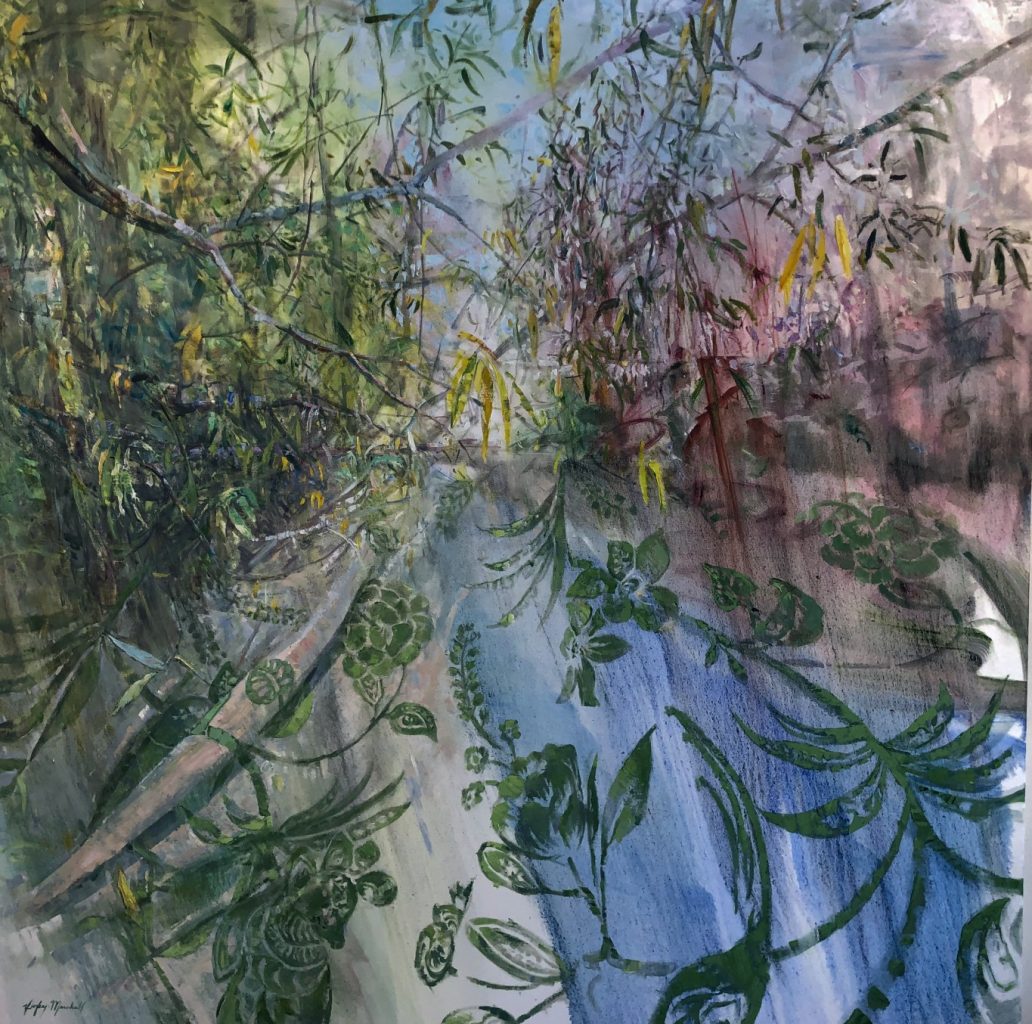 There is a strong fellow-feeling between these two artists’ intentions. They seem to be calling for a new resolve on the part of their audience. Whether that can be satisfied by some internal, personal process, or whether it requires something active, is part and perhaps parcel of their query. Not everyone believes there is much of a future for humanity, but it’s undeniable that unless people believe in it, no future is possible. The word the artists use is “link,” made real by the connections they make explicit everywhere in their own model: their collaboration.