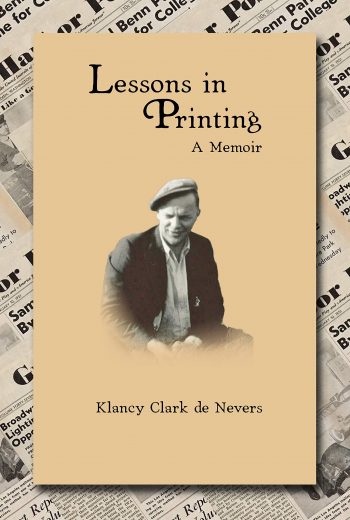 “If a piece of paper gets into my house for a day, I’ll save it forever,” writes Klancy Clark de Nevers, oblivious of Marie Kondo’s warning about papers: “they will never inspire joy, no matter how carefully you keep them.” For de Nevers, these boxes of family ephemera are less a source of nostalgia than a set of clues to confront failures of the past. She grew up in Aberdeen, Washington where her father Kearny Clark owned a press and published a small weekly newspaper called The Grays Harbor Post until it folded in 1961. The newspaper’s morgue was preserved on microfilm, recording the concerns and everyday life of the small natural-resource-dependent community while it declined from boosterism to economic bust. With Kearny writing weekly editorials, the Clark family kept their secrets in plain sight.

As a smart, ambitious girl in the 1940s and 50s, young Nancy Clark (aka “Klancy”) could hardly wait to get out of town. She went to Stanford, married an engineer (the late Noel de Nevers, who became a professor of Chemical Engineering at the University of Utah), and held her family at arm’s length. Of Kearny Clark, she writes, “My feelings for my father had long been enclosed in a carefully wrapped box labeled disdain. … I was not ready to unwrap a package held so firmly closed by pride and practicality.” De Nevers dedicates the book to siblings and cousins, but there’s also a second dedication that says, “This book is an act of contrition for my wrongs against my father. Working through the story is my penance.” The task of unwrapping drives the narrative of this family history.

What was wrong with Kearny Clark? It seems to have been the one thing that is most unforgivable to a sensitive teenage girl — he was kind of strange. He looked like character actor Peter Lorre. He willingly played the fool. He wrote personal letters and editorials in a folksy voice peppered with misspellings and out-of-date slang from the 1920s (“Old Joe [Josef Stalin] and his bevy of revamped Volga boatmen are doing a pretty fancy job of diplomatic footwork …”). He drank too much. Some of it was not his fault. He had epilepsy, though no adult ever talked to the kids about it. He eventually developed mental health problems serious enough to be hospitalized.

Still, he had a secure place in his family and in his community. Since he had not been sent to college, he took a correspondence course — the “Lessons in Printing” of the book’s title. He was a proud member of the printer’s union and skilled at his trade. At the print shop he was in his element, far less of an inadequate youngest son or an embarrassing dad. This workaday aspect of her father’s life provides de Nevers with a better understanding that, as a full human being, he was not defined solely by illness or by his family role:

The hours I spent standing around as a kid watching somebody work and later doing small jobs in the print shop are among my strongest memories, and now, looking back, give me a link to my father that just being one of the daughters at home did not.

As with her previous book, The Colonel and the Pacifist (2004), about the incarceration of Japanese during World War II, seen through the eyes of both the imprisoner and one of the imprisoned, de Nevers is a meticulous researcher, reluctant to accept any unreliable memory unless there is concrete supporting evidence. She’s trying to cut through the prejudice of her youthful self by sticking with just the facts. In a few places she describes unsuccessful attempts to approach the story though fiction, trying to rework it into something with a happier ending in which a more loving and supportive daughter might have heroically saved the press (and by extension, her father’s true self) from a fire and eventual bankruptcy. While these fables came to nothing, de Nevers nevertheless credits poetry and creative writing with tapping into buried emotions that inspired her to start digging into the past.

Although this is called a memoir, it’s not entirely autobiographical. For long stretches, de Nevers appears mainly as curator of papers and as a dogged researcher, vanishing from the story herself much as she vanished from her father’s life. Only toward the end does she finally let herself react, recounting an emotional blowup at a callous mortician during her father’s funeral as long repressed feelings rise to the surface.

While the particulars of history are specific to one family in one specific place, Kearny Clark’s biography also offers a more universal story about a family coping with mental illness and all the shame, secrecy, and personal sacrifices attached to it. Surely readers can forgive young Nancy Clark for taking her chance at happiness. Still, it’s a poignant reminder that it’s better to be kind to people now than to regret lost chances once it’s too late.

Lessons in Printing: A Memoir