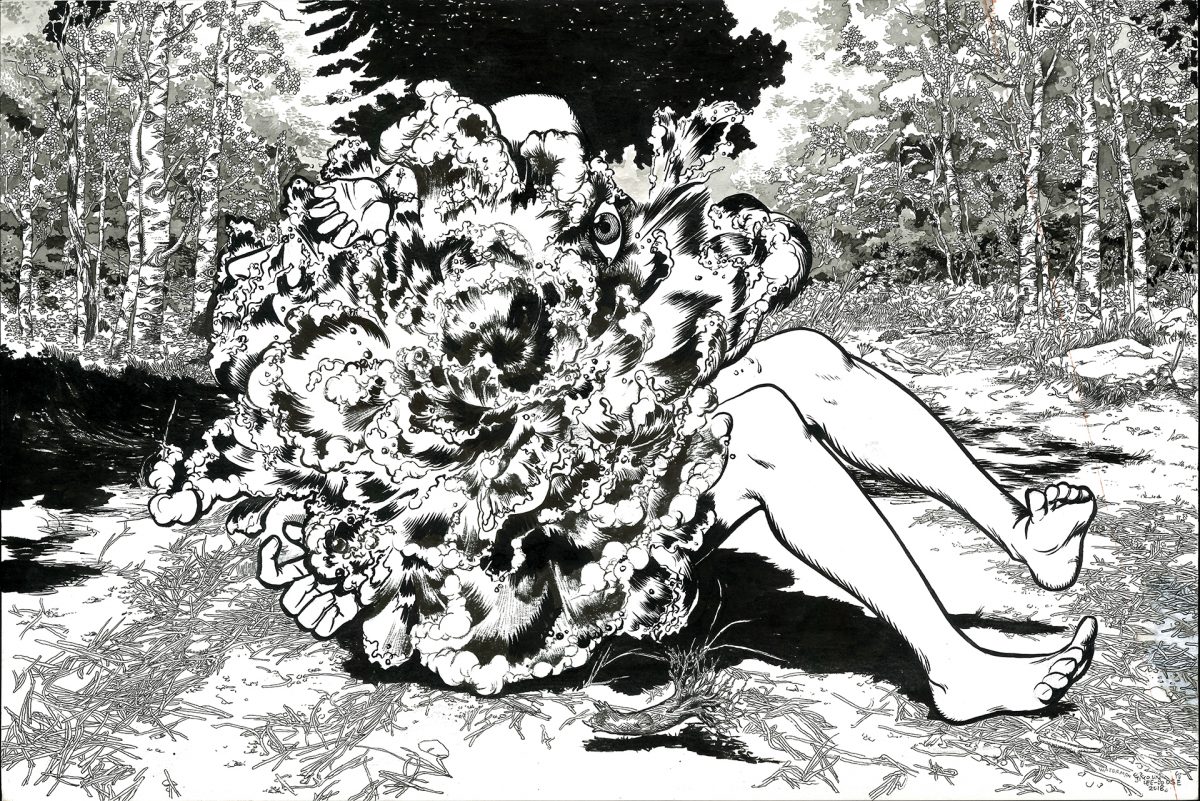 Major transitions often feel overwhelming, like a wave of dislocation that renders one temporarily paralyzed. Spatial transitions are among the most disarming, engendering unique challenges to the foundation of one’s personal, social and often cultural identity. This idea of “belonging” or existing as an “outsider” has been a catalyst for many artists to rethink the artificial barriers of place in thoughtful and impassioned ways.

Being, in her words, a “self-imposed outsider,” Jiyoun Lee-Lodge brings a nuanced view to the issue. Born and raised in Seoul, South Korea, Lee-Lodge is accustomed to life in a huge, bustling metropolis. Though her move from South Korea to New York City was no doubt consequential, her relocation to a comparably large city was at least familiar. It’s the transition from New York to Utah however, that has proved particularly revelatory, inspiring her emotive and moving Waterman series, now on view at the Alice Gallery.

In a series of pen and ink drawings, Lee-Lodge uses the rousing metaphor of a figure submerged in water to articulate the challenges of moving across the country and beginning a new life with her family. The drawings depict a recurring figure in what she calls a “troubled state,” moving within various spaces, ranging from the grand — the Uinta Mountains — to the banal — driving and navigating domestic spaces and a parking garage. In each, the figure is transitory and stifled by the varying degree of obstruction caused by waves of water.

The series showcases Lee-Lodge’s background as an animator — she formerly taught in the Department of Game Design at New York University — as well as her deft mastery of minute detail. It’s easy to get lost in the nature scenes, mimicking, if only for a second, the astounded psychology of the figures nestled within them. 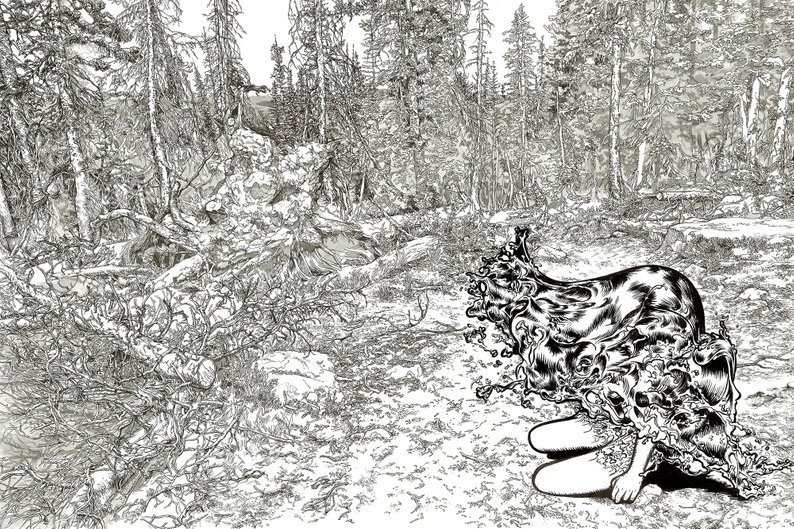 In “Waterman-Uintah,” a visual feast that both intrigues and disturbs, a pair of legs, hands and a single eye emerge from a chaotic swirl of waves. Despite being fully submerged in the wave of water, the human figure appears in a seated position, resting in an open grove of lush forest. Its counterpart, “Waterman-Hiking #2 (Uintah)” depicts a figure overcome by a tide of water, sitting in the corner of an otherwise vast mountainous region. In each, Lee-Lodge crafts a fascinating interplay between foreground and background and between the detail of the stylized figures and their hyper-realistic surroundings.

For Lee-Lodge, the vastness of Utah’s natural beauty presents a different kind of splendor, distinct from the enormous cityscapes of her life prior to Utah. Indeed, these nature scenes astutely capture a feeling of overwhelming isolation. Lee-Lodge explains that the state’s majestic aspen trees made an indelible impression, as the almond-shaped marks on the aspens’ surface mimicked huge eyes staring back at her. The ever-present and enchantingly constant gaze of the aspen trees elicited the prying eyes of Utahns, known for their perpetually cheerful disposition and inquisitiveness. 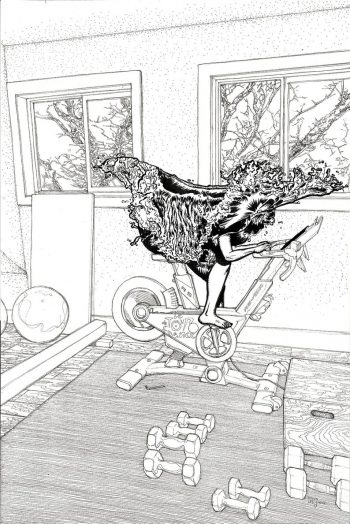 While the nature scenes render the sensation of astonishment obvious, the seemingly ordinary depictions of the water-covered figure navigating a home lawn, gym, bathroom, or parking garage, are, in some ways, even more interesting. In these, the water represents a tangible heaviness as one traverses from one location to another. Titles such as “Perfect Home” and “Office” signal the ever-present weight of this transition. Lee-Lodge candidly admits that the series aims to show the arduousness of “mimicking the ideal life,” and how that very often differs from the “real life.”

It’s a testament to the utterly captivating nature of the ink drawings that their lack of color fails to register. While Lee-Lodge normally maintains a colorful palette, this monochrome series is meant to evoke a journal-like sensation. Indeed, the autobiographical nature of the series is fascinating considering we never see the figure’s face.

Surprisingly to some, Utah has long been a refuge for “outsiders,” beginning with the fateful voyage of pioneers who made this unlikely desert utopia their home. Though its population is predominantly white, Utah remains a solidly unique harbor of sorts, both politically and as home to unparalleled natural landscapes. As its population continues to expand, so too does the definition of the “outsider” the state has worn as a badge of honor since its inception. In the end, Utah is heading for an inevitable wave of diversity, and with it a range of new perspectives. Through its unique identity, Utah sharply brings about the themes of discomfort and transition embedded in Lee-Lodge’s work, and provides rich artistic possibilities for those brave enough to embrace them. 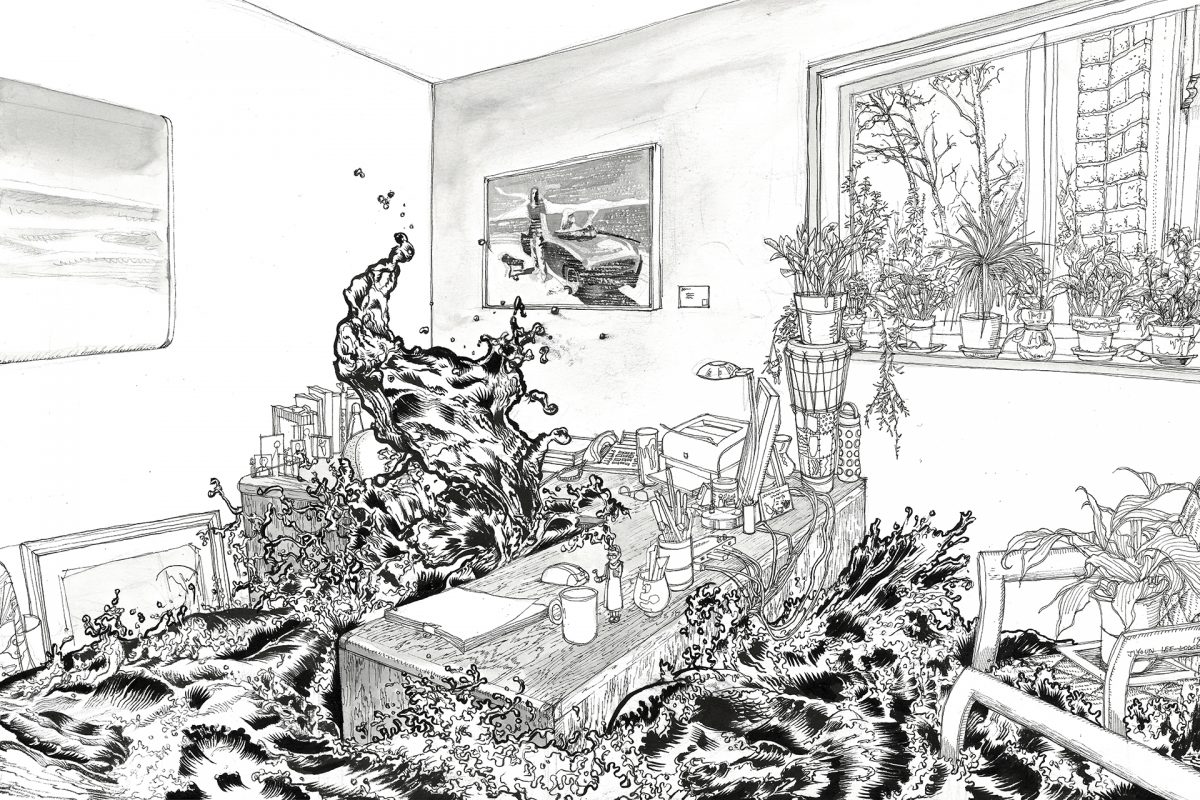