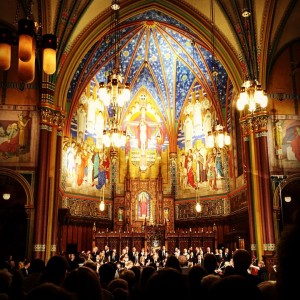 Style and passion, with remembrance—these attributes, when elegantly assembled, create a realm fit for a silver anniversary. For Utah Chamber Artists (UCA), its annual Collage concert at the Cathedral of the Madeleine can provide the bridge to such a needed domain. The expansive, golden-lit glow of the interior of the cathedral offers just the necessary vibrant atmosphere. The sense of style continues in a sustained, playful, and at times resolutely moving fashion. This year’s concert was an understated triumph to the start of the 25th anniversary season for UCA, which was founded in 1991.

This choir of 48, that also counts with it a chamber orchestra of 35 local musicians, phrases and balances smoothly, in a supple and all-embracing vista of sound. Its co-founder and principal conductor, Barlow Bradford, uses his effusively nimble conducting style to obtain a choral tone polished like obsidian, but with warmth to share. The assistant conductor, Eric Schmidt, from Germany, who studies under Bradford at the University of Utah, supports this style with his own concentrated flexibility. This is a desirable combination.

UCA’s Collage programs often include a number of brief choral works or excerpts combined with instrumental solos. These are sometimes then augmented with movements from concertos for a particular instrument. That was the case for this evening’s performances. Each composition lasted five to ten minutes.

The Collage concerts also feature lighting design by Chip Dance, who has worked in this capacity for a number of years. The designs range from almost fully-lit to those immersed into total darkness, with only the choir or another soloist highlighted. Such thoughtful design discretely augmented the performances.

The passion was channeled tellingly from the beginning in British composer Kenneth Leighton’s Let all the World in Every Corner Sing. Leighton lived from 1929-1988. This composition is a brief anthem for choir with organ, and the words are by the English poet George Herbert. Gabriele Terrone, the cathedral organist, was at the keyboard, with the choir perched up with him in the organ loft. The choir phrased this work richly and with translucence. The words “…the heart must bear the longest part” were especially energizing. The organ’s rhythmic lyricism peppered the chorus’s vivacious harmonic lines, and ended the piece in a poised flurry of emotion.

The lighting here evoked little lanterns of beehives resting on a bed of honey. While at first glance not the most inviting composition to begin the evening, Let all the World in Every Corner Sing left a distinct impression to take notice and listen intently to what follows — it served its purpose well in this instance.

French composer Maurice Ravel’s (1875-1937) two piano concertos grace Abravanel Hall about once a decade. Hearing one in a cathedral acoustic somewhat dampens its intricacies but not at the expense of its overall appeal. The G major concerto (composed 1929-1931) is a finely crafted and delectable concoction, and the second movement, an Adagio assai, is an almost-jazzy reverie. Here pianist Richard Marshall, a former UCA accompanist, was succulent with his harmonies, sensitively direct phrasing in the meandering melodies, and pensive passion. This was an idiomatically dreamy, wistful, even romantic take on the movement—a twinkling twilight taking time to rest, and the orchestra was excellent. As a hint of twilight, the lighting was darkened entirely, except for above the orchestra and pianist.

Twentieth-century American composer Aaron Copland’s second and final opera The Tender Land (premiered 1954) has never been performed by Utah Opera. His small output of choral music is heard occasionally, but “The Promise of Living,” the last song from the second opera, often appears separately on choral programs. Its gently bittersweet poignancy pierced the reverie that floated from the preceding Adagio assai from the Ravel concerto. The entries of the chorus were lush and clear, and the intense lyricism and gently radiant harmonies rendered themselves with fervor and discipline.

Olivier Messiaen (1908-1992) was perhaps the pre-eminent French composer of the mid-20th century. The cathedral organist, Gabriele Terrone, used the cathedral’s organ to perform a brief section from L’Ascension following the Copland. This organ work is an early composition of Messiaen, for whom the organ was the instrument of choice. The selected section was Transports de joie d’une ame Âme decant la gloire du Christ qui est la sienne, translated as “Transports of Joy from a Soul Before the Glory of Christ which is its own Glory.”

With its densely saturated harmonies, Transports found an inviting dwelling place in the vast spaces of the interior of the cathedral, unsheathing its densely rumbling colors and textures. The warm lyric urgency of The Promise of Living now faded and descended into a dawn-lit canyon seething to notice light. Transports‘ cascading rushes of harmonies, explosive rises and descents in color, and impulsive, almost deafening surges in dynamics were resplendent. Terrone suavely shifted the dynamics, spotlit the dark colors, and bounced the harmonies and rhythms robustly. The monumental architecture of this excerpt was sifted into a convincingly played quieter ending. For those who thrive on the unique world of organ music, this is a thrilling composition, but those less attuned to the wonders of the organ may have found it all too overwhelming.

A skillful rendition of Sed Amore by the American composer Dale Warland (b.1932) followed. Rocking gently in its harmonies and translucent textures, a lightly painted pallet passed its poise to a drifting eternity. The piano accompaniment was crystalline. This was a striking contrast to the Messiaen, but these two compositions joined in their celebration of instrumental color—only the human voice can rival and conquer the king of instruments.

A composition by Johann Sebastian Bach (1685-1750) seldom detracts from any musical program, but it can at times overshadow—especially in its complexities—the works it complements. Indeed, his sonatas and partitas for solo violin remain at the summit of all violin repertoire. The Largo from his Sonata in C major BWV 1005, played by local 17-year-old violinist Aubrey Oliverson, now studying in California, engaged the aural senses in the cathedral’s ascending monumentality with its comfortingly tart and tensile harmonies. There was a mixture of pensively wandering ones seeking the gleam they wish for, and by having Aubrey play in the middle of the main center aisle with only two lamps to guide her, the sense of a soloist merging with the attentive audience was sustained.

To launch the second half, after a 20-minute intermission, Latvian composer Ēriks Ešenvald’s (b.1977) New Moon held the cathedral’s sky cohesively in its resonance. It was sung by the choir in a half circle around the baptismal font, with lighting just above and the rest of the cathedral in darkness. This composition relies more on tone colors and textures to generate lyric urgency, and is far more soft-centered in its harmonies than the Leighton, which is imbued with astringency and a vortex of rhythmic dynamism. New Moon, in its center section, moves its harmonies into a trancelike vortex, abetted by a faint twinkle of chimes and a ringing gauzy glaze from the fingers of some choir members circling rims of champagne flutes partially filled with water. Utah Chamber Artists has augmented its repertoire in the last few years with intelligently chosen compositions by living Baltic composers, who are some of the most adventuresome choral composers writing today. Its performances of these compositions have all been superb, and this one was no exception.

The third and final movement of the Ravel Piano Concerto in G came next. It is marked Presto, and using its scampering, sensually motoric rhythms and minutely dashing and splashing colors, pianist Marshall’s pellucid sense of line spread the colors in invigorating fashion. The orchestra played with precision.

Samuel Barber (1910-1981), along with Aaron Copland, was one of the most prominent mid-20th century American composers. His Violin Concerto is by far his most performed piece. His few choral compositions conceal themselves closer to the fringes of even the choral repertoire. To Be Sung on the Water, one such piece, was conducted by Eric Schmidt, UCA’s assistant conductor. He and the singers garnered a panoply of sounds into a tightly and flexibly wound coil, with its aqueous, sensuously vigorous harmonies and seeping rhythms accentuated. In a suggestive move—wood with water—this piece was sung behind the wooden screen that partially hides a portion of the cathedral’s ambulatory on its northern end.

Goin’ Home was presented in an arrangement by Barlow Bradford, based on the Largo theme from the Czech Antonín Dvořák’s Symphony No.9, with a text by William Arms Fisher. Jim Sorenson (co-founder of the UCA) was the tenor soloist, and his daughter Cami Mower (a current member) the soprano soloist.  Their solo introductions and duet, with piano, were simply moving, with unadorned poignancy. This was a touching moment, with some needed hint of fragility in an otherwise exultant program.

The Gloria from the Missa Rigensis (premiered 2003) by the Latvian composer Uģis Prauliņš (b.1957) possesses an urgent, robustly fine lyric line, with a shifting sense of rhythms. There is an atmosphere of ethereal neutrality in the harmonies. All of this was conveyed by the choir alone and conductor Eric Schmidt in a smoothly dramatic performance that gracefully attempted to surround the baptismal font.

Fritz Kreisler’s Preludium and Allegro (published 1910) for violin and orchestra opened with dramatic, lush harmonies, then settled into rhapsody, with soaring melody and a hint of concealed regret. The Allegro‘s quaint urgency, soothing bustle of lyricism, and spiky drama gave violinist Aubree Oliverson space to exhibit her playful ease with melodies. Kreisler (1875-1962) was an Austrian violin virtuoso and composer on the side, and this is one of his signature pieces.

The finale was another Barlow Bradford arrangement, this time of the almost universal—at least in North America—hymn tune Amazing Grace, with a text by John Newton. This tune was published circa 1779. Jim Sorensen was again the soloist. With its warmly streamlined textures and melodic urgency gathered in an overwhelmingly caressing fashion, it ended the concert with a vibrancy all present could savor.

In its rapturous tonal clarity and blend, Utah Chamber Artists defines choral excellence in the state’s arts community. To experience this with even more sustained passion, music lovers should attend one of its performances that presents a more extensive work complete. The Mass for Unaccompanied Double Choir by Swiss composer Frank Martin beckons for the new year.