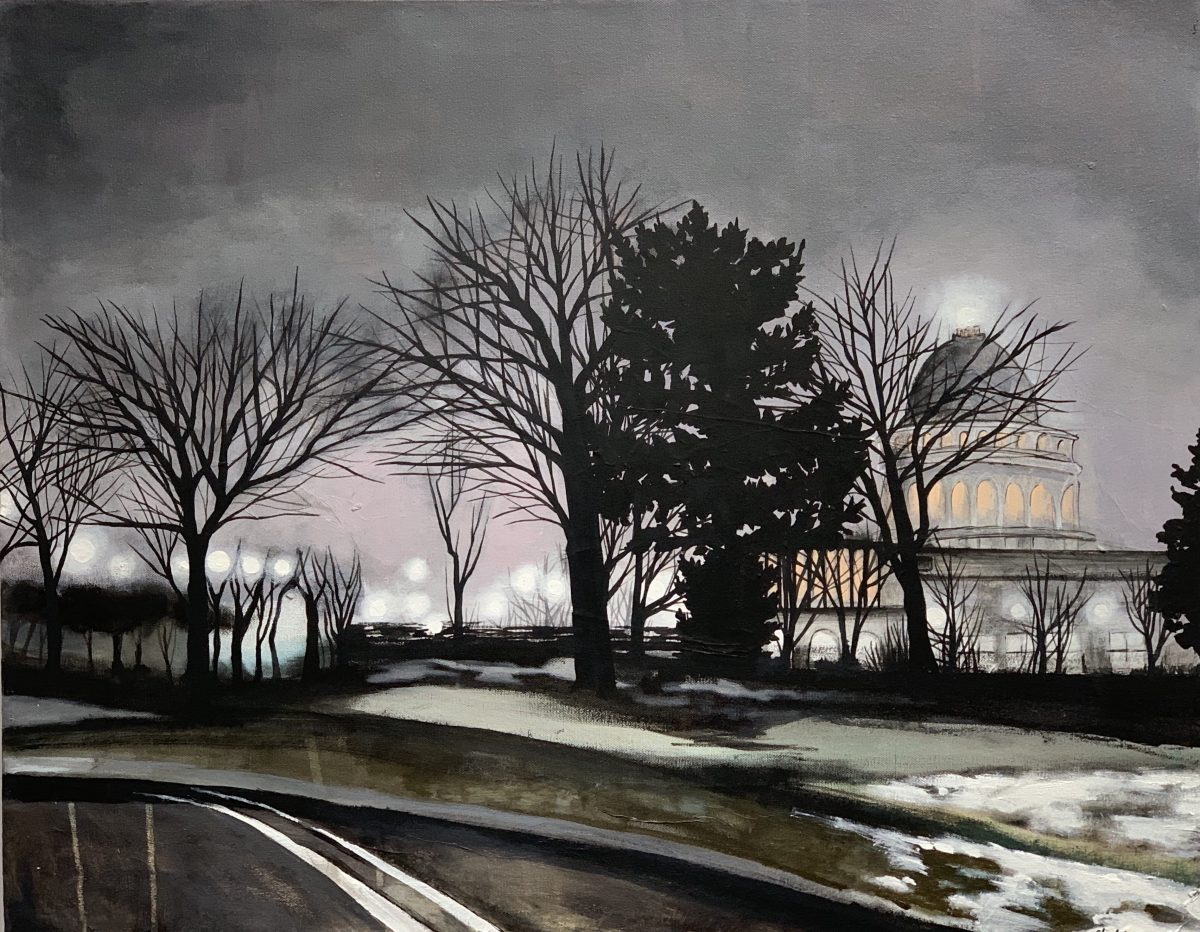 The conundrum: dirt is bad; dirt is sometimes beautifully dramatic.

We are of dust/dirt, as expressed by golden-haired Joni Mitchell’s song line: “We are stardust, we are golden.”

So what does an artist in Salt Lake City, or in any city, make of inversions — the filling of the valleys we live in with poisonous hazes of automobile exhaust and industrial fumes — our mountainscapes behind a haze of grime, till the cleansing solvents of moving air, snow, or rain, free the landscape from their dirty hanging veil? (In a fairytale, the plight and conundrum would be expressed as: For a curse had fallen over the land.)

An artist, of course, can imagine what he/she wants to see: Monet painted with failing vision, as Beethoven composed with almost no hearing; yet what they managed to see, or hear, made beauty. And dirt can be beautiful, almost a sophisticated city perfume of filth, as in the Impressionists’ many paintings of London a century ago in the midst of its unsolved heaves of coal/industrial filth. It was intensely beautiful, dramatized by its dirt, the way silver is — more beautiful with tarnish.

“The Potato Eaters,” the famous dirt-brown painting by van Gogh, is a compendium of dirt: hunched hungry people as grimed in every pore as the potatoes on their plates. Its honesty, its poverty and hunger and desperation, make it true and ugly and beautiful. (The painting makes us glad they have, however poor, found solution to their hunger; the dirt-poor and the dirt-potatoes seem to merge into one.) 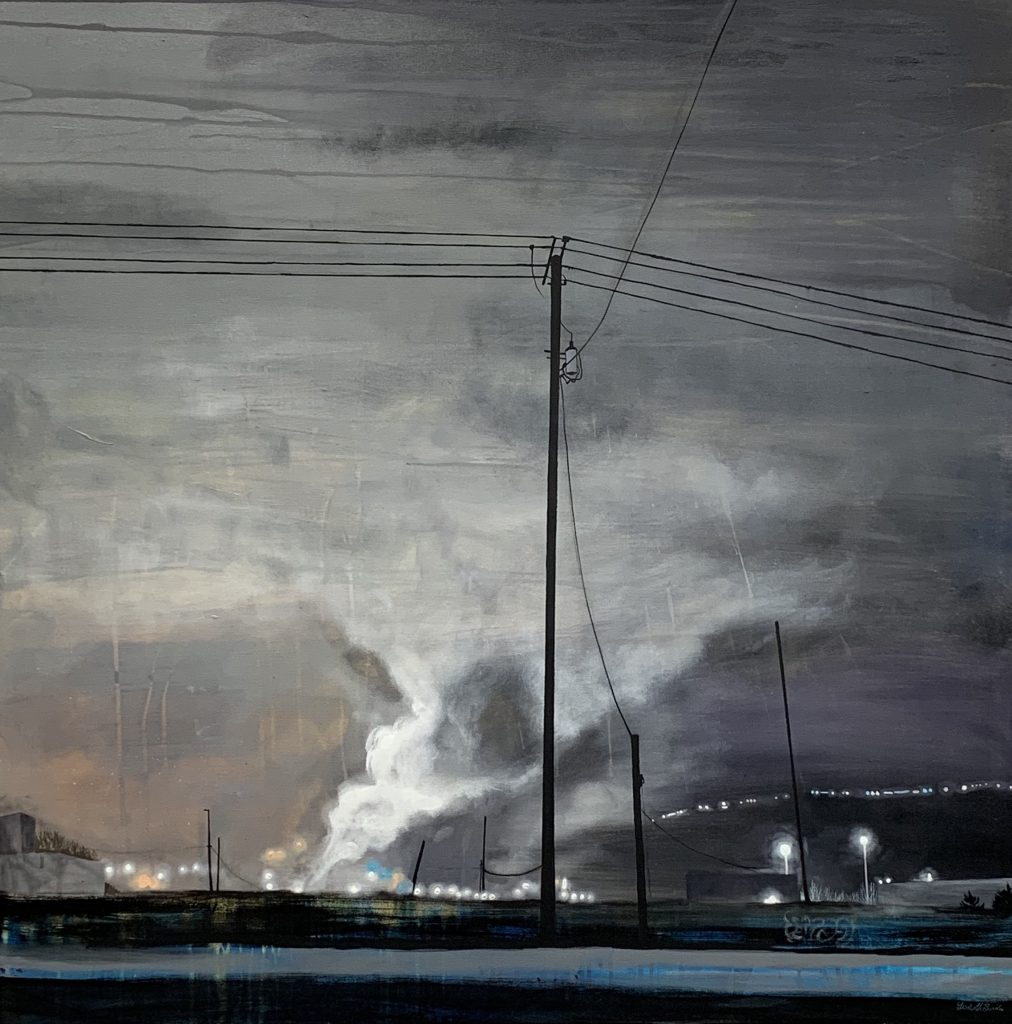 “View of Refineries from 300 North on January 11th”

In her paintings on display at DRAW Inc. — a charming twilight-blue old brick building on a corner in the Avenues, once, fittingly, a Laundromat, and a picture-framing shop— Elisabeth Bunker employs black silhouettes, much as Shakespeare employed hangers-about-the-castle, to set up drama. In “View of Refineries from 300 North, January Eleventh,” it is an extremely tall, lone, light pole, clouds ganging up behind it a bit like hoodlums; in “Utah State Capitol on January Eleventh,” a fringe of trees seem to frantically wave at a strangely pink-underbellied sky. The nightlight in the Capitol’s dome can barely pierce the thick, sickly frosting of the inversion-rich clouds; it’s a sickly cupcake with an almost frosting-swamped candle, dimmed and shamed and sputtering, a ruined birthday. In “The Living Room Trailhead on January Twelfth,” Bunker’s silhouettes of several trees reach and reach into the painting, trying, and failing, though multiply-fingered, to scrub the desperate sky clean.

Bunker’s silhouettes serve not only as foreground for drama, but as measure: We feel a flash of recognition that before us are the dark markings of thermometer, or barometer, sharp and judging, defining the condition of what we see. “View of Neff Canyon on January Twelfth, 2019” has a fringe of black trees at its base as foreboding and warning as charred trees left after forest fire: beyond is the beautiful rumple of marshmallow-cream sky. But look closer: it’s the same scraped, dribbled, disturbed sky which appears also in “Beck Street” and “View of Refineries” and “Neff Canyon,” skies which suggest wounds the body is laboring to heal, abscesses it is trying to relieve.

HEAL Utah, fighting the worsening air quality caused in valleys in Utah, is helping sponsor this exhibit, named “Keep Breathing” – two words often intoned to people in crisis to distract them from their doom. Bunker’s skies in these paintings are like hungry membranes, containing abundant air, yet, struggling for air.

Once, ailing people went to deserts for the air; artists went for the light, the quality of light. Santa Fe, for example, filled with artists — because of the mysterious pure almost indescribable — transforming — light. Santa Fe’s beautiful light survives.

But we struggle, and Bunker and HEAL Utah, via Draw Inc., have here presented (admittedly beautiful) pathology.

A vast part of the argument in Utah against this bad air must be the argument for the lucky pure beauty that is health. London has scrubbed its cityscape; Los Angeles has, with emission standards for cars, cleared its air. Utah has drama enough without the added hue of Payne’s Gray glazed atop its multiplicitous and beautiful and vivid others.

Let’s heal for health, and beauty too. We seek the prince who will restore Utah to its former glory. Here’s to making this again the place golden-headed Robert Redford marveled at, decades ago, urging others to discover, too — the wonder of the discovered gorgeous jewel box which is Utah — at a time when most of the rest of the world was dim, and unaware.