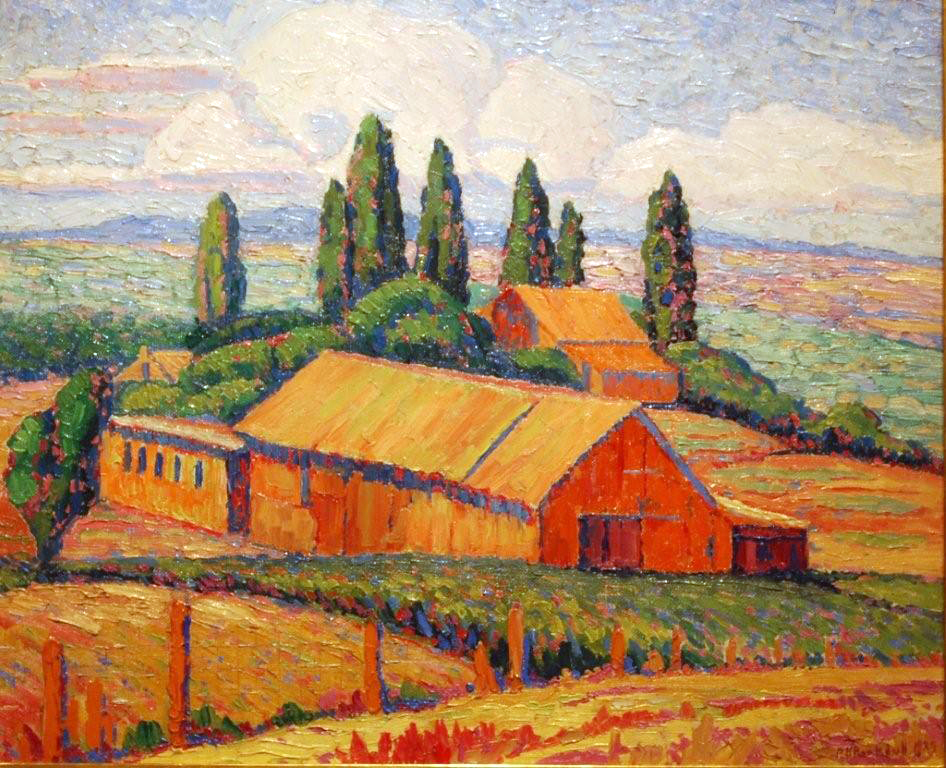 Though he lived to be eighty, Phillip Henry Barkdull’s artistic career is known by a short three-year spurt of artistic output cut short by tragedy. Barkdull came to his style late, and years as a teacher meant he didn’t have much time to devote to his own work, but when Barkdull discovered expressionism he stuck with it, remaining on the artistic outside of most of his Utah peers.

Born in Hatton, Utah (a place south of Fillmore that makes nearby Kanosh look like a metropolis), Barkdull was relegated to studying in remote rural schools when not helping his family with their struggling farm. When he enrolled at Provo’s Brigham Young High School (an offshoot of the original Brigham Young Acadmey) in 1911, Barkdull was 23, an age when most college students have graduated (even those on missions). His maturity so embarrassed him that he lied about his age when he enrolled. Though health problems had plagued him during his youth, Barkdull was a member of the High School track team, and he even managed to return to his hometown to compete as a ringer in local track meets. 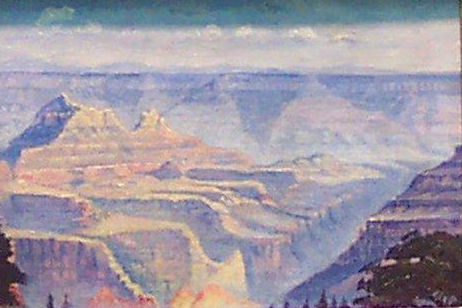 Barkdull graduated with an Arts and Manual Training Diploma in 1914 and began having success exhibiting both in the state and New York. He was hired as a supervisor of art and spent the summer of 1915 sketching in Yellowstone. In 1916 the news hungry Millard County Progress reported Barkdull’s return for the summer (to get an idea of how famished rural papers were at the time here’s an article from the paper: “A group of our young men and women are spending the week in Clear Creek Canyon where they went early Monday. They plan to return Saturday night.” Wow! I’m headed out to the west desert this weekend to dig fossils and blow off a few fireworks but I doubt the Trib will pick up on that story). Barkdull’s summer return to the family farm ran alongside an announcement of nearby Meadow’s claim to fame: “Meadow now holds the International record on automobiles per family. There are sixty families and fifteen automobiles or one auto for every four families. Philip Barkdull, a graduate of the BYU art course, and one of Utah’s most promising young artists, has returned home to spend the summer. Mr. Barkdull had three of his paintings accepted by the Utah Art Exhibit this year and two in the exhibit in New York City…” Barkdull told the paper he had plans to sketch at the Grand Canyon that year.

In 1917, with still just his high school certificate, Barkdull accepted the position of Instructor of Art at Dixie Normal College in St. George, for the term of one year. He was also drafted into the army during the hot days of World War I (he was number 631 from Millard County), but was discharged several months into his service because of lingering health problems. In the fall of 1918, he moved to Hurricane with the intent of “spending the winter . . . to improve his health.” Whatever physical recovery he might have made, his emotional well-being was certainly enhanced by his stay in Hurricane. He married a young (18) local girl, Evelyn Woodbury, in June 1919. Barkdull taught at Hurricane High and then returned to Dixie. 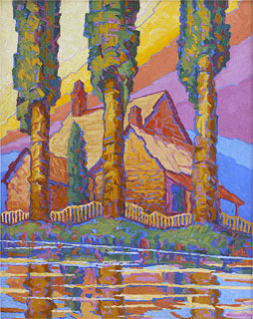 In 1921, the Washington County News reported: “New students are always welcome. The youngest student of the DNC (Dixie Normal College) is a product of the Art Department and arrived at the home of Mr. and Mrs. Philip Barkdull Monday, February 14. It’s a boy.” Small town newspapers published all kinds of information (which can be a boon to historians). Several months later the same newspaper published the financial statement for the Washington County School District. The declaration reports that Philip Barkdull was to receive the staggering (my adjective) sum of $650. For the year.

The Barkdulls experienced their first tragedy in 1923 with the death of their 23-months old son after a severe illness. A couple of months later Evelyn fell ill with sciatic rheumatism and was confined to her bed, but recovered by the summer. The couple would have three other children but would always feel a great void because of this loss.

That same year the family began a northward migration. In the fall, Barkdull was employed at West Millard High School. By 1926 they were in Provo, where Barkdull taught at Provo High School and spent the summers at BYU, finally earning his University degree in 1928. 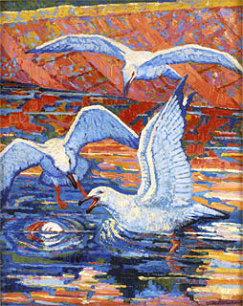 1928 was also the year Barkdull found himself associating with an American artist whose influence would dramatically change the direction of his art. Sven Birger Sandzen, of Kansas, had been invited by Utah Agricultural College [later Utah State University] art department chair and formidable artist, Calvin Fletcher, to become an artist in residence in Utah for a time. According to Vern Swanson, Director of the Springville Museum of Art, “Sandzen’s neo-impressionist technique, with its thick impasto, raw color, and regionalist subject matter presented in almost a Cubist style, sparked Barkdull’s imagination and resulted in paintings that shine out like a beacon amidst the foggy grey of many of his contemporaries.”

Anyone familiar with Utah Art by Olpin, Swanson, and Seifrit, will readily recognize “Designed Landscape: Symphony in Color,”|2|Barkdull’s masterpiece that graces the cover of the definitive Utah art reference. Created in 1930, the stylized, saturated artwork clearly demonstrates the results of Barkdull spending the summers of 1928 and 1929 studying with Sandzen. “Cache Valley Barns”  is another unmistakable entry in Barkdull’s short list of exquisite compositions. Only Fauvists Henri Moser and Louise Richards Farnsworth could be considered his peers, with virtually no one else in the Great Basin aligning with this brand of radical modernism. The critics in New York appreciated Barkdull’s approach when they viewed a sampling of his work sent to them for their review. Barkdull’s colorful style stood in sharp contrast to the new course of art, ushered in by the Great Depression. “Dirty Thirties” became the name attached to the new direction of art, so called as a result of the downtrodden effects of the Depression. Barkdull stayed true to his brand of expression and there is no evidence that he ever gave in to the dark, realist era of the early 30s.

In the three years after meeting Sandzen, Barkdull was very productive, creating the works for which he is known today. Unfortunately, this creative outburst was cut short by tragedy. One day, while crossing some railroad tracks, the lanky artist fell on one of the rails, pushing his nasal area into his brain. The accident effectively ended Barkdull’s distinct (in Utah anyway) style and for the remainder of his life, he would produce little, occasionally sketching and painting chiefly florals with his watercolors. 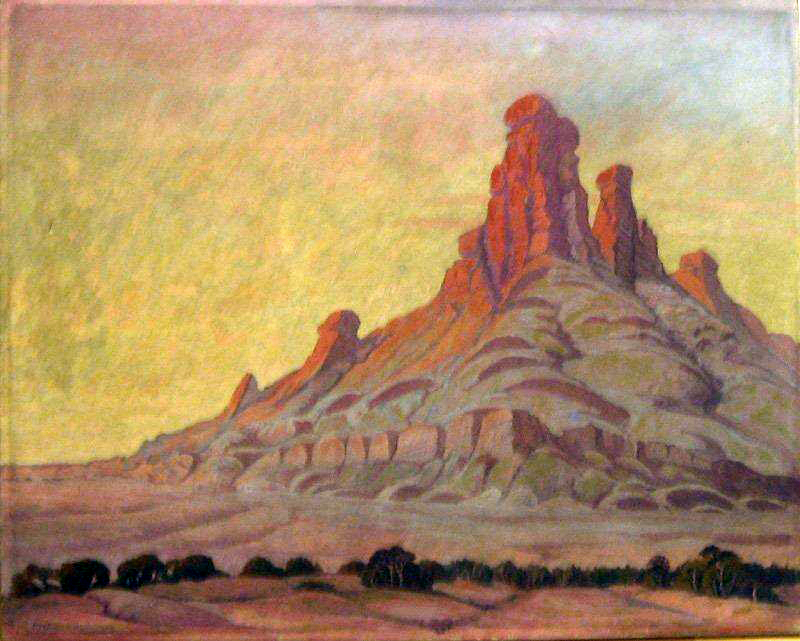 With this tragedy also came a renewal. B.F. Larsen, art department chair at BYU, elected to take a sabbatical in France and Barkdull was asked to replace him. Barkdull excelled in teaching and directing art studies. After the year-long appointment in Provo, Logan became Barkdull’s next direction as he accepted a position as supervisor of arts and crafts for the Logan school district. Part of his day was spent teaching at the high school. Because of his teaching and administrative duties, Barkdull’s talent waned until, due to further health problems, he retired at age 66. In order to meet financial obligations, Barkdull offered private art instruction and in so doing limited his own work. 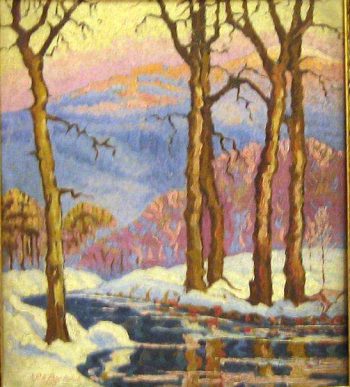 Some would argue that Barkdull never established himself as a significant Utah artist. One look at his limited works heavily discounts that fickle notion. Like Beauregard, Haag, and other early Utah artists whose work were cut short by tragedy, Barkdull’s work speaks for itself.

Tom Alder’s upcoming subjects include Paulmar Fjellboe, and father and son artists Cornelius and Paul Salisbury. If you have work by these artists or information about them and would like to share with the community please contact us at: editor@artistsofutah.org