A Bloom in the Desert: Phyllis Barber’s Essays in The Precarious Walk 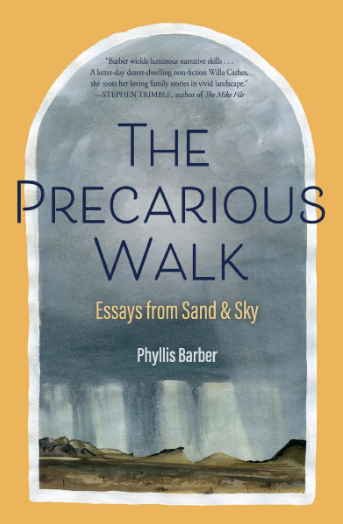 This book of essays opens with a memory of a song sung by the writer’s grandmother. “A voice that could make people cry,” the writer writes. Her grandmother was asked to sing a popular song as an emotional blessing or benediction at a celebration of the Boulder (Hoover) dam being completed in Nevada in 1935. Barber, no longer a young woman, writing these essays, is writing her own song, and she goes for broke:

I could have been a Native woman with red paint smeared across my cheeks who understands the barren hills and that there are others/other natives/other tribes that want what I have coaxed from the land when the need is stark.

I could have been a pioneer woman, building an adobe house, birthing and burying.

I was a child splashing in the waters of Lake Mead with my father standing close by.

I am a woman wondering about the naming of names and the busyness of human effort to subdue the earth and engineer it into something habitable.

Call me whatever you want. I don’t need a name. Names are useful for a while – the ones found on dried scraps of paper, on pages of books in libraries and museums and on microfiche – in between floods and sandstorms. The wind will blow.

And Phyllis Barber’s essays are like a dam. And, too, whether or not she gives a damn: essays of both containment and release.

The Precarious Walk, Essays of Sand and Sky, published by Utah’s Torrey Press, is divided into two sections of essays: In the Desert and Beyond the Desert. (Could an editor or the writer, to be perverse or surprising, have dared to reverse, as an experiment, this expectable order: desert as culminative destination; not desert as taking-off point?) But, water, again: all of Barber’s essays are like permeable or semi-permeable membranes, like water kept or water shared, cumulative experiences like water-draws and water-releases.

And religion runs through it, like the Colorado. To be raised Mormon, it seems, can eventually raise the question of whether one is extricable: is there such a thing as a Jill Mormon? (After she tumbles down the hill, before or after Jack, must she return the pail? Or is the pail unreturnable?) The author describes how she once revisited Salt Lake City, and found herself, one Saturday morning, part of an assembly line at Deseret Soap and Detergent. In her chapter “The Cannery” Barber reflects on the Mormon symbol of the beehive, the belief of the LDS church that achievement/coherence is best achieved through communal, bee-like industriousness (similar to emotional coherence created in any given church building, tall and echoing, where singing in unison is occurring: the hymn of belonging, shared breathing, all turned into one).

But Barber also seeks freedom from religion; irritably, at one point, she speaks of the right to “faithfulness, within, and without the fold,” writes of wondering “if life itself is the only true religion” — and even entitles one of her chapters “The Precarious Walk from Mormonism.” Jill’s spilling pail, then, after falling down the hill with her, is on the auction block, with or without water. Does the church own it, or does she?

But, reading her essays, in Walk, you glean that her religious upbringing is always somewhat happily, hummingly present, like memories of a thousand executed square-dance movements, ingrained by repetition, an always-tugging-at-her foundation of dosey-does, before adulthood, travel adventures, and marriages. And lessons in Middle Eastern belly dance. (A dance form, yes, but much more – hip.)

Dancing, post-divorce, with a Peruvian shaman who teaches at a “healing” retreat in Peru, Barber finds herself suddenly improvising, mid-dance: she puts her hands up, makes repeated hand-clapping motions of childhood American “pattycake” – completely mystifying her dance partner, the shaman. Only after several repeats does he learn/join in that hand-clapping rhythm, to her relief – turning what could have been her retreat into childhood (awkwardness, backwardness) into cultural overlap (jazz riff of a dance improvisation, lesson for a faraway shaman).

Is improvisation like this similar in many ways to the skill of essay-writing? Thinking them up, writing them out, hoping they balance each other, make it down the river in one piece? A complex matter, yet, her title for these essays, The Precarious Walk – even with its mystical addition of Essays from Sand and Sky – reminds you she prizes the elegance of simplicity. Much like Terry Tempest Williams, observing, in her own 2019 book of essays (Erosion: Essays of Undoing, MacMillan) celebrating the simplicity of a writer’s tools compared to the complex gear of birdwatchers (“…scopes, tripods, binoculars, cameras, notebooks, pencils…”). “The tools of a writer,” Tempest Williams wrote, “are not only simple, but primitive: a stick of sharpened lead and pieces of paper.”

Yet writers use invisible-weight scopes, tripods, binoculars, cameras: distillations from chaotic memory, intuitive reorganizations, and all the inherently writerly acts of persistence and rebellion. Their points-of-view decry more sedentary others, go beyond (if good, or excelling) three-dimensional equipment and merely factual data. Some of Barber’s most rememberable observations in Walk are her emotional, yet distant, memories of falling: a boulder falling almost on her birth-family’s car (“that could have killed us,” her father said); Barber’s fall from the back of a motorcycle; Barber’s fall from a bicycle; Barber’s fall from a hiking trail into a stream. “What does it mean to fall?” she asks, in the chapter moving from conventional and religious ideas of falling to the real-life rearrangement of her own psyche after each of these incidents. In detail, after most of these incidents, she discusses the broken membrane of the body, her skin, gone or mixed inter-osmosis with her flesh and dirt and gravel; how she knew her mother’s “ruthless” administration of red-staining mecurochrome was sure to follow.

Why does Barber love the desert? Explaining this is the book’s tantalizing oasis, the calmest, most blue-and-distant part of this book. Barber remembers moving from Boulder City to Las Vegas in 1954, where her father went from dam support staff to selling insurance. According to her, the houses there, standing up to the sun and wind, felt frail:

Landing there felt like being shot onto the barren face of the moon…a harsh place. The walls of our home barely stood up to the wind when it blew…(the desert) tries to send people way with its bitter wind and searing sun.

But the alignment of desert states, with an independent writer’s state, is felt in Barber’s sudden words, “I could be the desert itself.” She also writes: “…while the desert isn’t exactly friendly, I’ve always been drawn to it like filings from a magnet.” And, she writes, in a tone of forbearance and awe – “the desert is subtle.”

Perhaps the desert feels like the last and truest test of life? How things are after everything else has been stripped away, all that crazy and over-optimistic lushness which youth and strength and water bring, like the green glut of an over-rainy spring?

As desert metaphors, you could consider a joyous Georgia O’Keeffe, who after the death of a husband left New York City behind, and was photographed riding on the back of a motorcycle in New Mexico in her nineties down a desert trail: her face a-thrill. Or desert cactus, producing the most fantastical and brilliant of all blooms. Or shade in the desert, sometimes referred to as the desert’s true water, its cool and defining blueish beauty, its reprieve, which artists record again and again. Phyllis Barber’s book is a bloom in the sun, waiting for shade.

The Precarious Walk, Essays from Sand and Sky

Phyllis Barber will be in conversation with writer Karin Anderson, The King’s English, Salt Lake City, May 24, 6 pm.