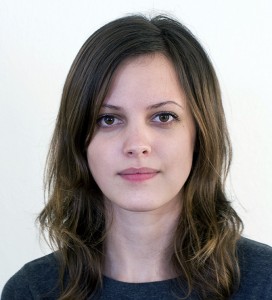 Louise Åkebrand was born in Bad Homburg, Germany in 1986 and immigrated to Utah as a teenager where she is currently finishing her BFA in photography at Weber State University. Her work explores spaces of intimacy within the structure of contemporary surveillance.
In 2012, Louise was a finalist in the student fine art category of the New York Photo Awards, exhibiting at the Dumbo Arts Festival.

These images have been selected from a larger series titled Sons of Juárez. What initially drew me to Google Earth Street View is its ability to offer portraits that hold a unique sense of neutrality and even objectivity, despite its many technical failures. People in these random visual samples become mere casualties caught by a lens intended to map geography. I began to wonder what this application might do with a place as complex and perhaps misunderstood as Ciudad Juárez, Mexico.
I was surprised to find that the majority of the city had Street View available, significantly more than neighboring El Paso. Google first started recording Juárez in 2009, at a time when the city had already been called the most dangerous city in the world, a place of incomprehensible violence and corruption, and a relentless glimpse into our future.
I spent several hours a week for close to seven months on virtual walks through the city and its suburbs collecting samples. Although the Street View archive of Juárez holds uncanny weight, it also carries a familiar narrative, one of daily life with its insecurities and struggles, even humor. The Street View samples of Juárez are able to visualize the disagreement of narratives in a unique way, a new kind of poetry.
Perhaps that is the reason I was able to have an intimate experience with a place 1800 miles away. The many hours spent in the bright sunlight feel like solid memories to me, hardly two-dimensional, and I have to remind myself at times that I have in fact never physically been to Ciudad Juárez. In reality, I am just one of a thousand gazes, surveilling from a safe distance. 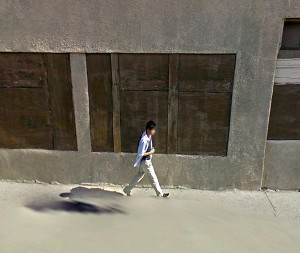