The Greeks had a word for it. They called it Symmetry, which today often means a mirror-image. For an older society, one less needing to simplify an overly stimulating world, it meant balance. A symmetrical composition presented a balanced image. They may have found this concept in the contemplation of their own bodies, which invariably depart from a perfect match of left to right, but generally so do in a pleasing fashion. Unlike a mirror image, symmetry is a creative force: the obelisk on one side calls up the sphere on the other (two Greek words) in an effort to balance as many of their qualities as possible. Some of the subtler, more compound symmetries include identity (male and female, inner and outer, I and thou), biases (pro and con, approach and avoidance) and motivation (wishes and needs, attraction and repulsion).

Utah provides a comprehensive artistic environment for a rich and varied creative community, but among its principal figures, Frank McEntire deserves attention for his prolific and ever-evolving body of work. Although probably known best for large works that insist on being taken seriously — stones, furniture, machines, office fixtures suggesting permanence — he limits his materials to things he himself can lift and carry, insisting on a human scale that makes his art, unlike so much of the last century’s enormities, approachable on a human level. Nor does he engage in bombast; his most characteristic objects have a centripetal energy that leads the viewer into itself, suggesting a journey into a quiet, private place: a mind, a soul, a heart.

In 7even Last Words, McEntire has matched his seven gradual variations — which together explore and respond to one of the great themes of Western art — to the space available — a quiet hallway in the public — friendly Cottonwood Presbyterian Church in Murray — resulting in an intimate experience not unlike visiting the chapels that can be found on the periphery of most larger Christian churches. Last words are traditionally vested with particular significance, and as it happens, seven short sentences — called words — have been associated with the last breaths of the man dying on the cross, whose resurrection, since it proved who he truly was and validated all his earlier and later teachings, will be seen in time as his most important act. What gives these seven statements particular gravity is that, given the fragmentation of the sources for the New Testament story, efforts began in the second century and continue through centuries, bolstered by artistic and musical interventions, to harmonize the Gospels. These seven words represent the result of those efforts.

Because it uses so many found objects, chosen to integrate as much as possible of the human enterprise into the result, assemblage art like McEntire’s has often been narrowly viewed, or even completely misinterpreted, as a social satire or even a cartoon, devoid of the artistic qualities seen and sought after in more traditional media. In fact, the fault lies in the public’s perception, and this is one of the least observed, most often overlooked qualities in art works made from things found: the extent to which the artist must subject these materials to precisely the same transformations that would otherwise be brought to bear by line, light and tonality on paper, paint, marble or bronze. In the art work of Frank McEntire, whether a passage is collaged out of printed matter, pried off of some broken machine, or found on the shelf of a secondhand store, its use is governed by the same demands as would be the image he draws or paints: it has to work, to satisfy the composition wherein he places it. The aesthetic, with all that implies, whether on the level of pure vision or that of pure idea, or somewhere in between, demands to be balanced with the narrative, the ideology, or whatever content may be present.

The 7even Last Words do not constitute a linear narrative. Rather, they meditate upon the drama that played out on Golgotha, contemplating, as McEntire has it, “retribution and forgiveness, sorrow and solace, falsehood and truth, death and resurrection.” Consequently, he does not attempt to illustrate the passage of time in his seven panels. In fact, in this place eternity prevails, as represented by the broken clock mechanisms that replace the cross, the instrument of suffering. Time, of course, is the cross on which all mortals may be said to suffer. Yet as one moves from one tablet to another, contemplating the rhythms created by the energetically coiled or wildly broken springs, the gears, hammers, and calligraphic backing plates of the clocks, then the alternation of poplar panels, each shaped like a church’s gable, makes them follow each other like breaths. The shifting body language and facial expressions of the mass-produced figures, each now given an individual character by the vagaries of usage, assume an appropriate dimension. After all, an individual’s sacrifice, like one person’s story, is a singular statement. Here, if Frank McEntire has it right, the generic nature shared by seven figures lends that sacrifice a universal dimension. 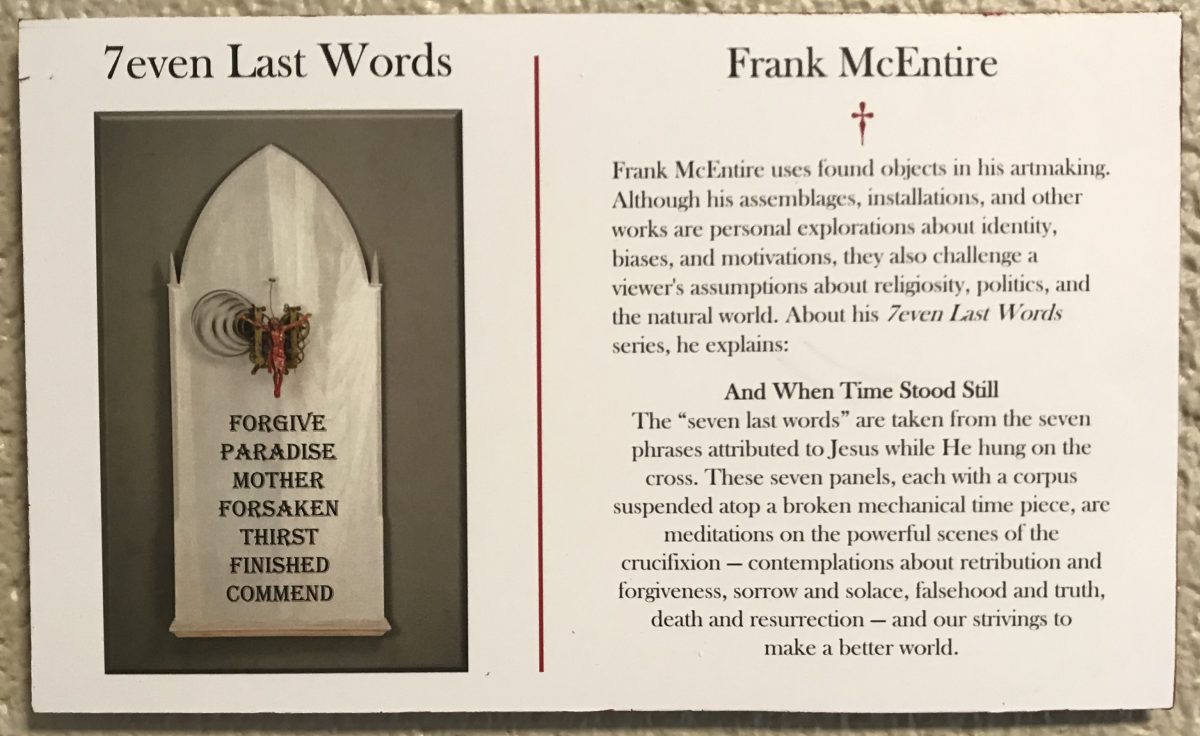