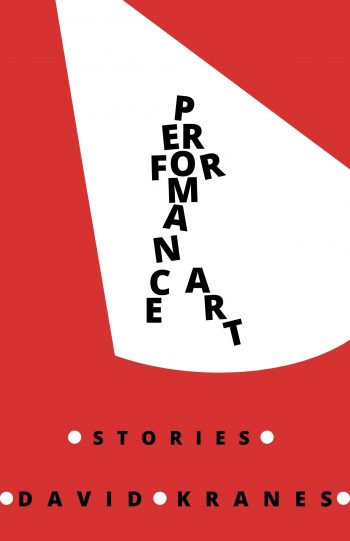 Performance Art is a twentieth-century name for a twentieth-century art form. It is also the title of David Kranes’ most recent collection of short stories, symbolized by the jumbled letters of the title that, on the cover, have pulled themselves up into a human figure and stepped into the spotlight. Another Utah local, painter Sam Wilson, once made a painting just to point out that a visiting artist’s installation of a banana peel was inedible, and it’s hard to shake the thought that Kranes, by using the term “performance” to refer to daredevils, glass and fire eaters, stand-up comedians, and would-be Houdinis, alongside film actors, directors, and so-called producers, is in part taking the mickey out of some pretentious individuals whose works lack the disciplined practice over years, in front of a paying audience, that decades of successful plays, novels, and short stories have given him.

Which is not to say he hasn’t earned that right. Kranes, whatever serious topic he takes on, never fails to entertain, keeping his audience laughing in the midst of weighty ideas. It’s a knack young writers pine for and struggle to get. He never lets the point get in the way of the story. For instance, he took on and demolished the erroneous idea that the arts only recently spawned performers in his novel, The Hunting Years, wherein his gallerist hires an actor to impersonate the painter and show off for potential collectors during the opening of their exhibition, thus pointing out that it’s not enough to hide in ones garret and paint brilliantly; one must also perform the part of Artist before the public, and the two skills are not the same.

That said, Kranes’ characters hold no truck with performers who believe they are making fine art; they seems more concerned with down to earth matters: i.e. craft, and Kranes’ interest runs more to what motivates performers to go out before an audience, and how they handle success or failure. In these 13 refreshingly unconventional stories, he examines the differences between individual performers and the distinction, such as it may be, between performers and so-called real life. In “The Daredevil’s Son,” the title character tries to convince his father that the non-negotiable compulsion to perform might not be heritable, while dad, who risks his life at every turn, refuses to see how that could be true. The narrator, meanwhile, asks another form of nature, in the form of squirrels that fly, to settle the dispute.

Writing, of course, is also a performance, and David Kranes knows how to effortlessly make reading him become compulsive. Two stories involve large casts of real people, celebrities in fact, whom he makes do whatever he wishes. It’s an intoxicating experience, yeasted with the knowledge that even if he hasn’t spent time with these individuals, he must know what it’s like to hang with the most famous. Between this sort of appeasement and his way with words, which can be both hypnotic and habit forming, a reader often wishes to grab someone nearby in order to share, while a reviewer might want to quote this or that gem. But the prose is built of such intricate and organic form that it resists excerpting. Taking it out of context is like trying to make the punchline of a joke stand alone. Actually trying, though, might lend some insight into the elaborate reality in back of any performance. While viewers relax and enjoy what they think is happening, the performer is in an entirely different reality: tense, focused, and concerned with a thousand things that must go right, yet can so easily go wrong. It’s like an entirely separate planet, which the rest of us can only imagine. With help from David Kranes.

Not since Robin Williams played Carnegie Hall has anyone revealed the interior monologue of a stand-up comic as vividly as happens in “The Stand-Up Phobic.” Comedy, wherein humor is performed instead of arising naturally, might be the art of knowing how much can be omitted from a story, with the goal of letting the audience surprise and delight themselves by supplying what’s been left out. Kranes knows how to be funny, but the theater is also a place of magic, and several magicians figure in Performance Art. Anyone hoping to learn their secrets, or those of any of these performers, will be disappointed, though. Rather, in “The Fish Magician,” Kranes’ ultimate story in more ways than one, the magic is real, definitely not a trick, and we end up departing his company pondering what happens to the audience after the performer and the performance have completed the task of altering us irrevocably.