You probably have a week to ten days left to see the current exhibitions at participating Salt Lake galleries before the next Gallery Stroll. Here’s Kasey Boone’s World Series take on what there is to see.

HOME RUN: If you only have time to make it to one exhibition in the next couple of weeks, make it to the Forum’s Making Our Mark. The Forum made a bold move by putting on an exhibition of printmakers, sometimes thought of as the poor cousins of the fine art world, only a step above photographers. The Forum took a big swing, and if you stop by the show I think you’ll see they hit this one hard and out of the ballpark. The variety and quality of the artists involved is what makes this exhibition exceptional. This show demonstrates just how strong and versatile a medium printmaking can be. As these artists demonstrate, printmaking is just like any other medium — in the hands of the right craftsmen it allows the artists personality to shine through. Works can be light, as in Bob Kleinschmidt’s Putti Pearl Diving — showing two “putti” diving downward after what appear to be halos. Or in the hands of another of Salt Lake’s best printmakers, the print can take on a searing intensity, as in Karl Pace’s Burning For Your Love. With thirteen other fine artists, there’s something for everyone to catch. A home run. Forum Gallery, 511 West 200 South, SLC wed – sat, noon to 5. 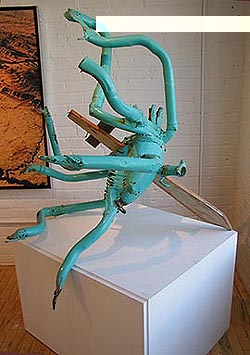 TRIPLE: Art Access: “Curated” shows (shows involving a number of artists built around a theme) may be producing the most interesting exhibits in town. Normally, I prefer to look deep — usually at one artist in a one-person show. But what I like about some of the shows I’ve seen recently, and especially this month, is the relationships established when a number of artists are shown together. The Art Access exhibit proves this point. “Opening a Dialogue allows various Utah artists, or, rather, their works, to dialogue with each other. In this show, the topic of the environment has given them the chance to talk. Art Access is always deft at packing in the most bang for your buck in their small exhibition space. Chris Peterson, curator of the exhibit, has an astonishingly simple and direct piece that works great as an artistic statement and an environmental statement. A large insect-like monster is impaled with a simple sword made out of two pieces of old wood. The title reads The Citizens’ Battle Against Magcorp. The work is the environmentalists “St. George slaying the Dragon.” As often with Art Access, the works shown are an eclectic mix asking the viewer to reconsider their traditional notions of art. From traditional landscapes to installation art. Thought-provoking and visually stimulating.

Base Hit: Like the Forum exhibition, HORNE Fine Art’ s show Dusk to Dawn gets the strength of its hit from the breadth of its artists. Fifteen artists explore the time between dusk and dawn in these nightscapes, using a variety of media. Stylistically, most of the works are done in a “realistic” manner, which can range from the academic to the wonderfully nuanced. Horne Fine Art gives the public the subtlety of Doug Braithwaite and the unique vision of Brad Slaugh, mixed in with some captivating scenes by Ken Baxter and a number of other local artists. Unfortunately, as a whole the exhibition doesn’t seem to work as well as some of its individual parts. Some of the pieces seem to happen across night, rather than being any explicit statement about it. A good base hit. 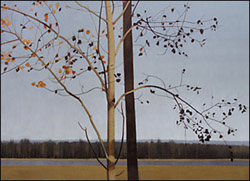 Double: Connie Borup at Phillips Gallery . Borup’s paintings have a calm insistence about them. They are hung on the rack of a Mondrianesque grid structure, firm horizontal lines crossed by a strong vertical reaching from top to bottom. She clothes this structure in twilight and bare tree trunks. This repetition of structure and form is the element of her body of work that gives it such impact. It may also be its weakness. For a painter who can be very delicate and very strong at the same time, one might hope to see in what other directions she can go. If you like what you’ve seen of Borup’s work over the past few years, this exhibit will not disappoint; though it is not likely to surprise. A strong double to left field.

Sliding Double: Shawn Rossiter at Chroma Gallery. I took this artist to task in a review last year for not deciding what he wants to do. In this exhibition he seems to be getting closer to a vision. The Chroma Gallery exhibition shows a number of abstracted pastels, ranging from cubist, Picasso-like depictions of the human form, to completely non-objective renderings of line, form and color. While in my last review I thought Rossiter’s best works were his landscapes, I think it is in these abstracted pastels that he begins to show a personal vision. The looseness and experimentation of what are essentially drawings have a force and wonder about them that are compelling. I give him a sliding double.