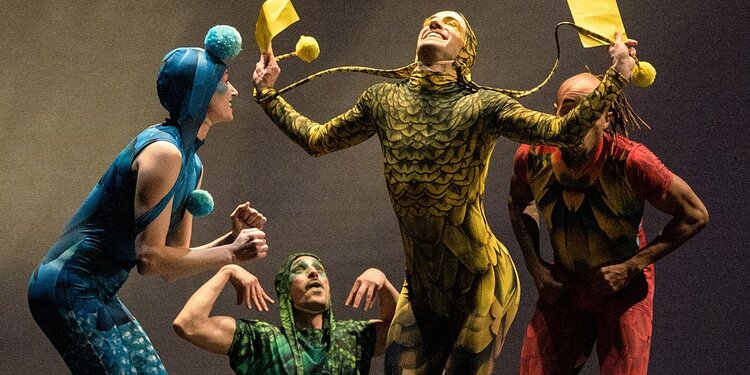 The phrase “a show for all ages” often means one should hope there are many children in the audience. The reactions of the young crowd for whom it is intended is part of enjoying the experience of family-oriented dance and theater. There were some children in the Capitol Theater for Friday night’s return of The Live Creature & Ethereal Things, though not many.  But this show did not hinge on their laughter and engagement for its emotional substance.  Ethereal Things is not so much storytelling for kids as a collaborative synthesis of the stories of kids. The show’s investment in the power and validity of kids’ stories truly presents an all-ages event.

Ethereal Things was created last season in partnership with Flying Bobcat Theatrical Laboratory and the Red Fred Project, which makes books with children living in extraordinary circumstances (rare diseases, critical illnesses, life-limiting situations) from the stories they wish to tell. This centering of the children’s perspectives, of their stories as they want to tell them, is the firm foundation of this imaginative show.

The show opens on a stage with a narrator (the charismatic guest performer Tito Livas) and a single hospital bed. He introduces us to una niña. This is the first of many thoughtful substitutions of Spanish cognates or low-context words and phrases, the meaning of which is easily guessed by speakers of English, creating fluid and enriching code-switching. This niña is danced with total joy and commitment by Melissa Rochelle Younker. We are presented with the hospital bed because it is a real and important part of her world. But right away, the narrator presents a simple and beautiful exposition: he “listened to her, she became a bird, here we go.” Melissa transforms into the Purple Pájaro. There is ample space and time given to her total embodiment of a bird discovering the joy of flight, which is the perfect precedent for the remainder of the show.

The full company joins this pájaro púrpura onstage with colors – and stories – of their own.  In an evening of works collectively titled Allegory, this is perfectly simple and apt. Together, they form a lively bird crew — The Jolly Troop. Some particularly inspiring moments from this cohort include a series of turning lifts beneath the moon and a lovely silhouette against the backdrop made by craftily wielding flashlights. Their costumes shared a visual cohesion, in fitted feather-print, but reflected individual character with whimsical puffs, hats, sleeves, and frills. Similarly, the dancers of Ririe-Woodbury can dance a perfectly unison ensemble, and are stunningly unique and distinct in their individual strengths.

Ethereal Things showcases this quality. It relies on it. Although the narrator plays a critical role, guiding the flow of the story, there is very little actual narrative. The story lives and breathes with the individual characterizations expressed in movement. Megan McCarthy’s blue bird is serene and elastic, and charmingly irked by the others. Brian Nelson’s sprightly yellow bird and Bashaun Williams’ cheekily grinning, meticulously-ticking red bird dance a mejores amigos/best friends section together to appreciative laughter. Company newcomer Nicholas Jurica doubles as a hilarious can-canning bad bird, which plays especially well off of bubbly Parisian orange bird Dominica Greene. We lose Melissa’s character at the end, with the simple but elegant device of a flight away up the theater aisle. It is poignant and understated.  It remains a show respecting the individual child, their interactions with others and their world, and their vibrant imaginations.

The premiere of Aberrations of Light following the intermission offered the tonal and structural counterpoint of a darkly pensive work. The video projections on the forward scrim featured somber abstractions of lines and nebulae against the dimly lit stage. The costuming was tasteful, distinguishing the company and talented guest dancers from Utah Valley University with appropriate subtlety. The movement was moody but not muted. Visual interest and the craft of staging a larger corps sustained the piece. It meandered ephemerally like the galactic dust and extremes of scale the projections invoked, but left the viewer with a solid impression of style and tone. Allegory seems like curious programming in featuring two such divergent works. But the breadth and distinction certainly made for an expansive experience. 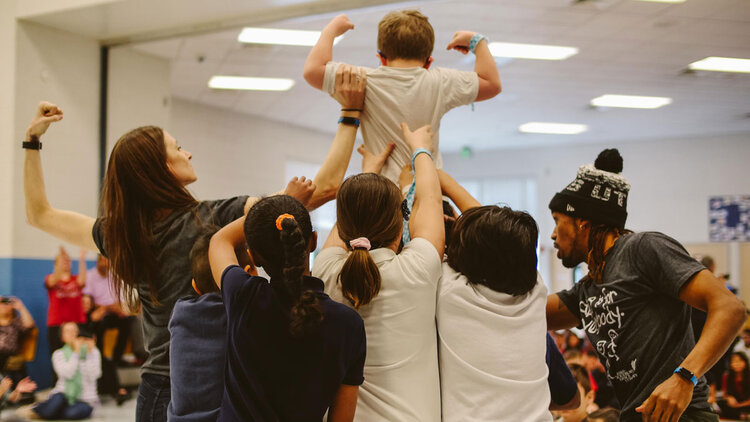 Ririe-Woodbury dancers performing at a school