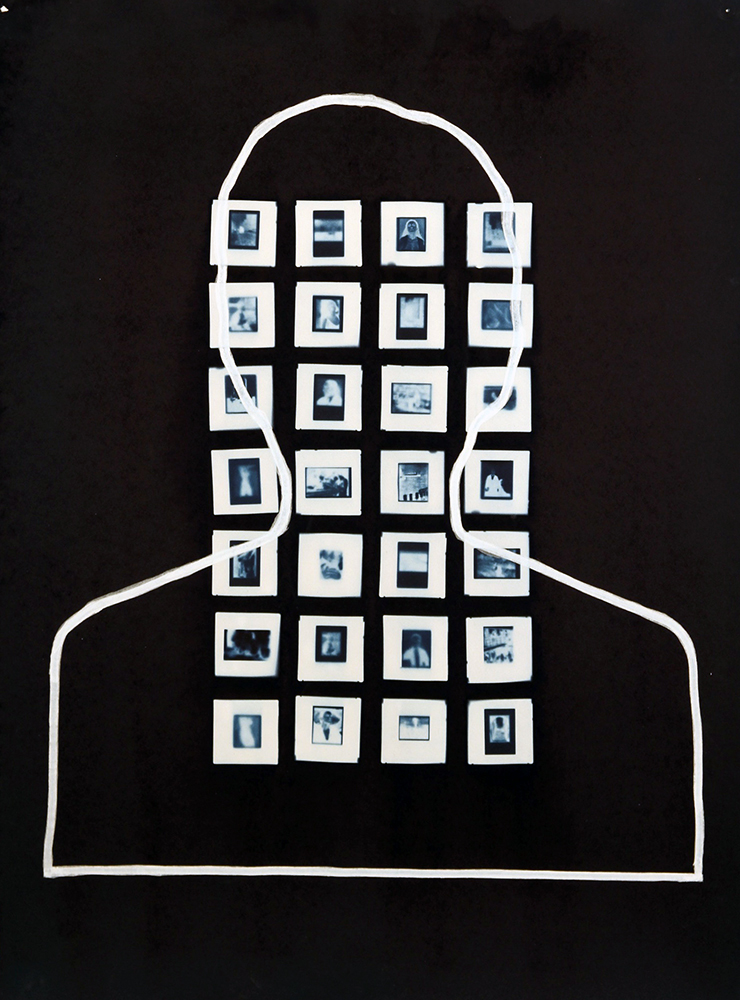 Raise your hand if you have sat in a hardback chair in a darkened room, surrounded by rows of people sitting in similarly uncomfortable chairs, listening to a monotone voice explain to you a moment in history while you viewed an image projected onto a screen…

Raise your hand if you know the noisy clank of a slide carousel, the hum of its fan, and the rhythmic shift from one image to the next…

Raise your hand if you have seen a slide library, those shallow drawers stacked atop each other full of plastic squares holding 35mm positive film, thousands of images neatly arranged to represent history as a visual chronology…

For generations of non-millennial students, the slide library, darkened lecture hall and distinctive hum and click of the slide projector were hallmarks of the educational experience. Prior to digital imaging and asking The Goog for any and all things, professors loaded slide carousels with small plastic squares holding positive film so that when the slides were projected onto a screen the audience would see lights, shades, and colors true to the original object (i.e. the opposite of a negative). Slides are now obsolete as instructional materials and have become historical objects in and of themselves, but in this context they carry historical meaning and therefore power. In History of Photography, her current exhibition at Alice Gallery, Laurel Caryn appropriates the slide libraries from the art history and photography departments of the University of Utah (where Caryn is Assistant Professor/Lecturer in the Art and Art History Department) to reflect upon the slide as both object and purveyor of the historical canon. She uses simple techniques and simple visual cues to set the stage for a rich reflection on the photographic object, the collective memory, and the teaching of history. 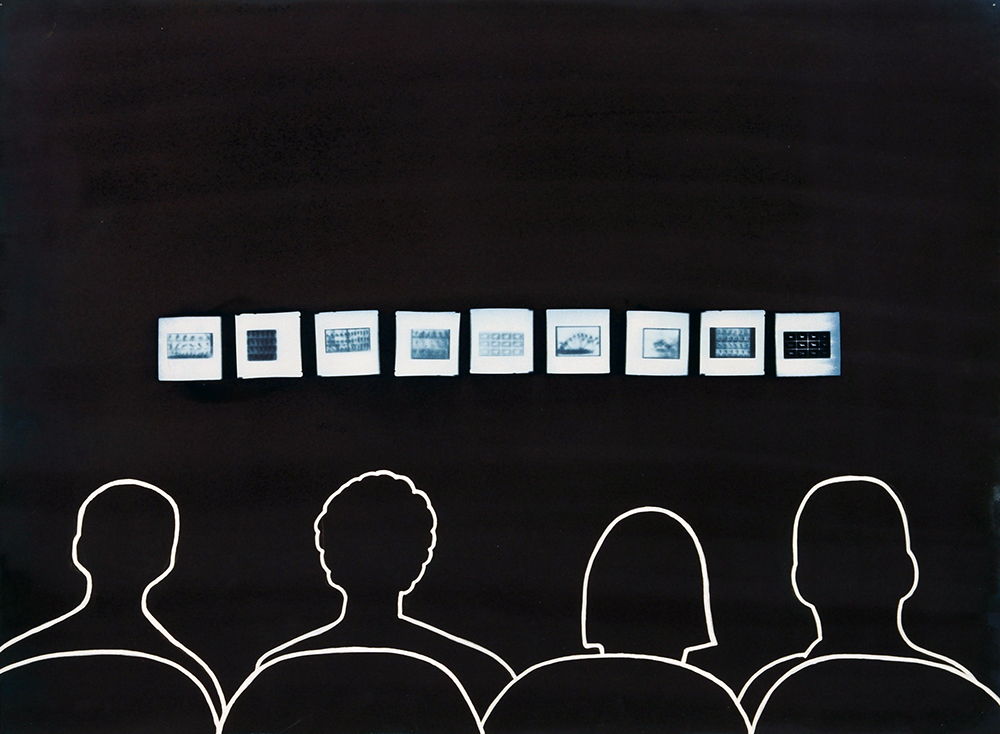 History of Photography is a precise and monochrome body of work, created in tones of blue and white. In each work, slides are arranged in rows and columns, the implied student viewers represented by simple line silhouettes in white. The work is produced in blue, the hallmark of the cyanotype—a photographic emulsion that is sensitive to ultraviolet light and creates different shades of blue—an easy and affordable alternative photographic process (“alternative” being the term used to describe analog photographic techniques). “I don’t remember going through a time when I wasn’t interested in alternative processes,” says Caryn. Though she put her camera down to produce this photographic body of work, it remains true to light sensitive techniques and historically important processes. The white squares are slides, used as negatives, placed directly onto the emulsion to create a photogram. This simple technique produces a collage of shapes that invite the viewer to take a closer look.

Despite the negative print, it will be easy for many to identify the artworks in many of the slides. The images are iconic, collectively recognizable to Caryn, this reviewer, and more than likely to anyone who has studied art in the pre-millennial generations. However, the work quietly challenges this assumption. Are they collectively recognizable? Is there a generational gap?

Before the Internet, in the age of carefully crafted textbooks that guided courses, we had a collective image-set that was understood to be composed of the important images of moments in history. The textbook molded a collective image data-set that we understood together. Dorothea Lange’s “Migrant Mother,” for example, is the image of The Great Depression in history textbooks, art or otherwise, and we as a society share that image. Slide libraries were limited and subsequently represented a narrow vision of an artist’s work. Professors carefully chose which images to show their students and these representations of an artist’s work could be the first and last a student ever saw. While Caryn believes the current access to more images is ultimately a positive thing—for students wanting to see the larger scope of an artist’s work and for people in general wanting to research more about history or current events—she questions what will be lost if the age of the shared visual memory is lost. “That collective memory has faded now that we aren’t just stuck with looking at images that only a professor in a classroom will show us. We have access to so many more.” She poses the question: what if “Migrant Mother” isn’t a shared visual memory? What happens when a society’s access to information disrupts the collective memory? What happens when the next generation of artists isn’t limited to a slide library’s selection of potential influence? 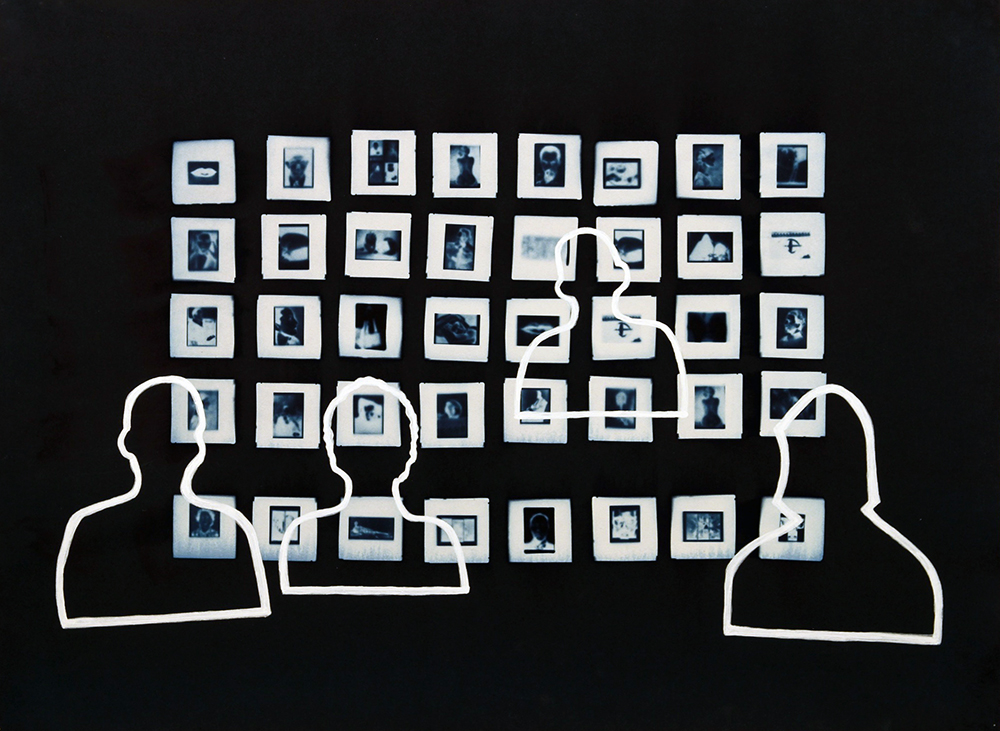 But like the negative and positive sides to a photographic image, Caryn also examines the possible fault-lines of the collective canon created by the slide library. In Caryn’s works, the photograms reverse the positive held in the slide and we see a small, rectangular negative within the white square. Unlike the classroom setting, accurate color representation is not the point, and Caryn’s use of monochrome cyanotype blue suggests to the viewer to see the images as contextual clues rather than visual representations. As you examine Caryn’s works, pay attention to the titles of each. Titles like “Dorothea Lange/Jacques Lartigue,” “Man Ray/Chuck Close,” and “Tina Modotti/Duane Michals” hold two interesting insights. One: disparate artists live together within the slide library because of their last names: interesting associations between artists happen accidentally through assigned order. Two: many more men than women are represented in the slide library—eleven men compared to six women. Within this representation are two unique juxtapositions: Georgia O’Keeffe and Alfred Stieglitz, Cindy Sherman and Richard Avedon.

Raise your hand if you can picture a Georgia O’Keeffe painting in your mind. What about a Stieglitz photograph? Stieglitz is an important figure in art history. His gallery, 291, introduced work by some of Europe’s most avant-garde artists of the early 1900s to an American audience. And, the gallery showed photography next to paintings, sculptures, and other media considered to be fine art at a time when photography was seen as a lesser art. O’Keeffe and Stieglitz were longtime lovers and spouses. She was his muse and he obsessively photographed her between 1918 and 1925. O’Keeffe, however, is the better known of the pair, famous for her paintings of flowers, desert landscapes, and bleached animal skulls—major contributions to American Modernism. In Caryn’s works “Alfred Stieglitz” and “Georgia O’Keeffe” the images suggest Stieglitz is more important in the historical canon. His lengthy grid of slides compared to O’Keeffe’s two, visually suggest that O’Keeffe is only a footnote to this photographer. Is this an artifact of when the slide library was created, or a reflection of historical importance vs. current popularity? “I think even today students know Stieglitz as an important figure in photography but could they visualize one of his images?” Caryn says. “I think that is harder, where you can [visualize an image by] O’Keeffe.” 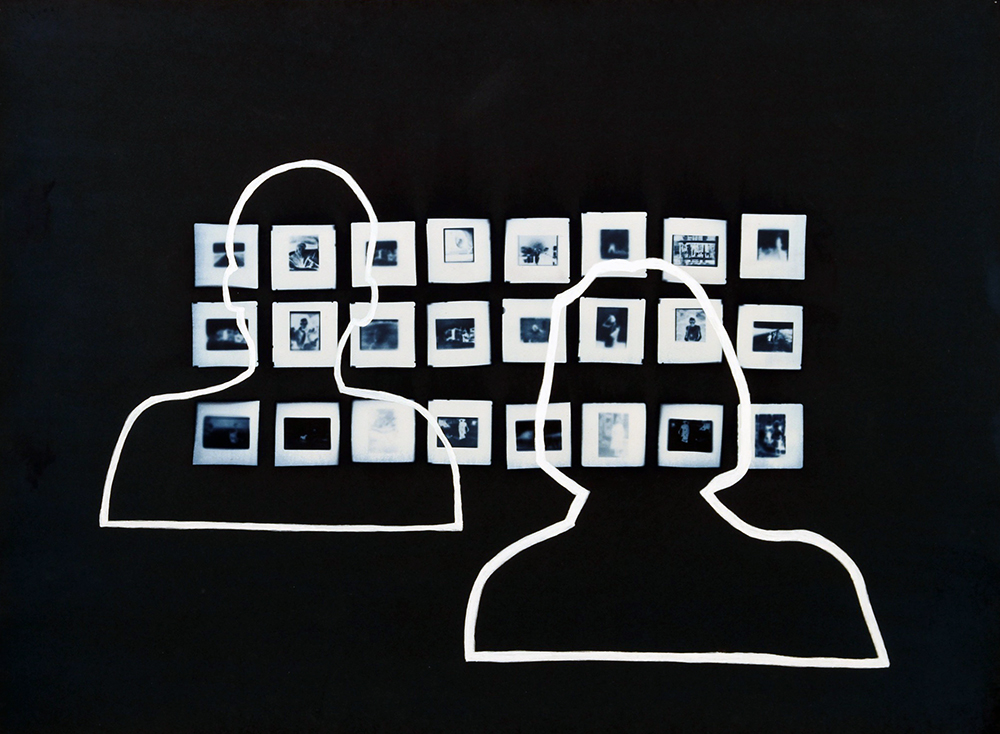 Photograms of slides representing Cindy Sherman, a strong contemporary female artist, are across the room from Richard Avedon’s. Both artists work with portraits. Sherman is known for photographing herself as different characters in different scenes as a commentary on different aspects of modern life. Photography for Sherman is a tool for contemporary commentary. Avedon’s use of photography is more traditional. He is known for seemingly simple and raw portraits, as well as fashion photography. The greater number of Sherman slides suggests her relative importance in the trajectory of art history. But Caryn’s juxtaposition of Sherman with Avedon creates other meanings as well. While Avedon photographed all genders, this slide library focuses on his female portraits. A female artist using herself as the vessel for expression juxtaposed with a male artist’s images of women for his expression is a subtle look at societal and historical norms.

Deceptively simple, this exhibition leads you through different meditations on art and history. It is simultaneously enthusiastic about the digital future while being nostalgic for a slower, simpler photographic past. And while the history of photography contains the lengthy footnote of being a lesser art to painting and sculpture, contemporary artists are changing this—Caryn included. Many galleries, museums, and publications categorize photography as a separate entity from the “fine” arts for many different reasons. History of Photography is not a photography exhibition but rather an art exhibition. Caryn states, “There are so many artists working in [all media] now. There are people like Cindy Sherman who would never call herself a photographer. So I think it has helped people brand themselves differently because it seems old fashioned. But you will still see it in the slide library and in publications. But I think that, again, is an archaic way of categorizing. Just like slides.” 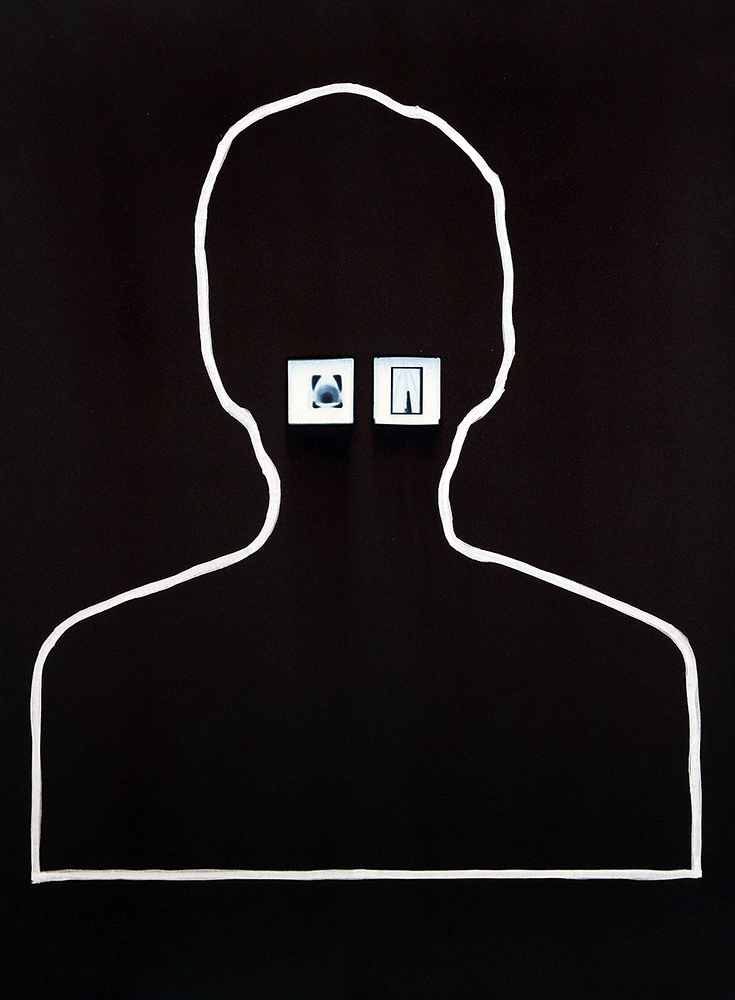 History of Photography, Laurel Caryn at Alice Gallery, Salt Lake City, through May 6.

Christine Baczek is a visual artist and co-founder of Luminaria, an alternative photography studio in Salt Lake City that specializes in historical photographic processes and offers workshops, a tintype portrait studio, and custom printing.