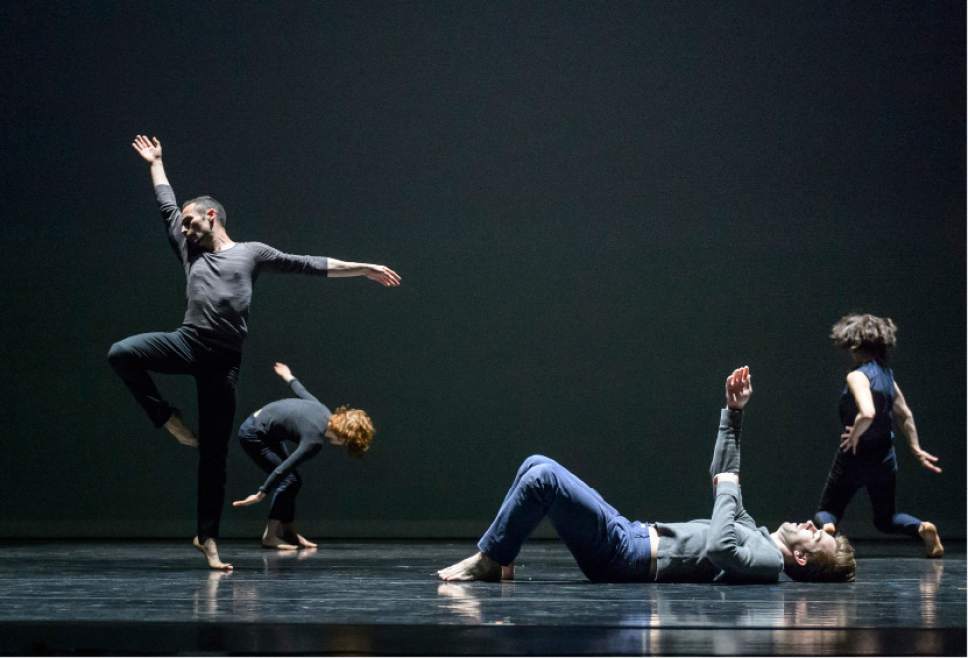 Ririe-Woodbury’s Fall Season showcased three dances, two of which were world premieres, this past weekend.  Each piece showcased six dancers, the first two with guest Breeanne Saxton, and the last with Alexandra Jane Bradshaw making a return after an injury.  The company looked strong, dancing with confidence, nuance and polished athleticism.

Adam Barruch’s prima materia was a lovely work which offered a clear sense of craft and traditional partnering where the women shine.  The stage was set with three transparent pillars that divide the space and blur the dancers into hazy forms as they move behind them.  This gives an otherwise crystalline work an air of ambiguity.  It was beautiful to watch the dancers show us line, breath and shape, and this is a piece that doesn’t polarize or offend.  It shows lovely dancing and clear emerging relationships; it is “the first material,” before life (the show) unravels with questions and tension.

Shift, choreographed by Daniel Charon, wastes no time in establishing intent as the lights go up to Mary Lyn Graves dancing vivaciously in a bright red dress, while Bradley Beakes faces upstage pantomiming being on his phone, oblivious to the world around him.  This work, which is part one of the trilogy Together Alone, has several truncated sections: a fun dance party, an exploration of isolation within a group, a young couple in duet, and even a section evoking the beloved musical West Side Story.  All these sections add to a disjointed and non-linear experience, not unlike the experience of scrolling Facebook and reading statuses of civil unrest, displaced refugees, celebrity follies and cute cats.

The idea that our virtual lives are perhaps more interesting, or at least more commanding, than our flesh and blood ones is again confronted when the dancers’ shadows are projected on the cyc —  where their bodies appear clear, sculpted, and larger than life, making the real bodies on the stage seem terribly ordinary.  When given the choice, what do we choose to see?

At times it was hard to decipher if Shift was being cheeky or was making an unapologetic departure from the cool abstraction many expect of modern dance.  A duet using the projection of texts (complete with emoticons) show us a juvenile tumult when a cellphone loudly ringing interrupts the dancing and the dancers stark and undressed become trapped in the image of their phones…whether serious or obvious, cheeky or scattered, the message was clear: Get Off Your Phone. But this message becomes more complicated when one considers all the exposure and advertising companies garner via social media.  Before coming to the show I had read a preview, promotional material, and several status updates surrounding Fall Season.  So maybe I should get offline, but not so fast that I miss ‘liking’ Ririe Woodbury’s status update.

The show ended with States Rendered, a Doug Varone piece choreographed last year which features video design by Ellen Bromberg.  This piece hardly settles or solidifies; the dancers are like popcorn in hot oil, simmering and then exploding through the space. The electronic sound mixed with black and white video gives off tension and contributes to a rich, if not overwhelming, sensory experience.  Perhaps instead of showing us what our modern life with technology has become like Charon did, Varone exaggerates it until it becomes almost unbearable to experience.  Alexandra Jane Bradshaw has a strong solo juxtaposing breath and tension, and like the piece generally, hints at aggression and violence.  The grey muted costumes echo a structure that is just shy of finding one thing, and just as an image is found, it is broken and dissipates into another.  The piece ends mid-sentence with the dancers barely making it into a pile downstage and then the lights go black and it’s over.

This piece is published in conjunction with lovedancemore.org.