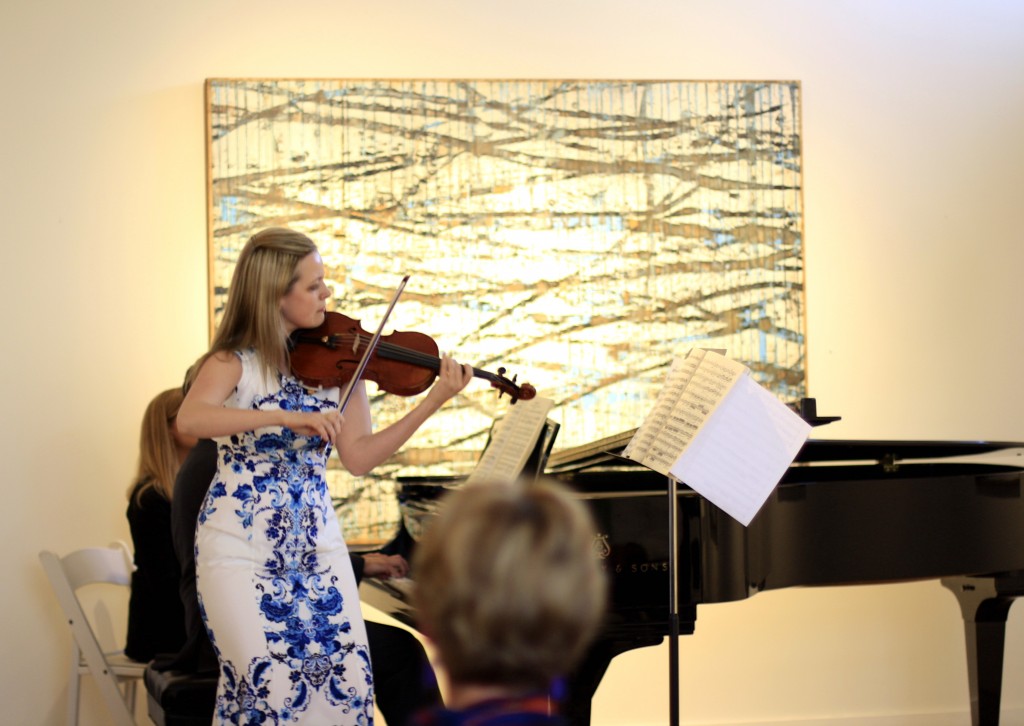 Utah Symphony Associate Concertmaster Kathryn Eberle and Principal Symphony Keyboard Jason Hardink have been threading their way through all of German composer Ludwig van Beethoven’s ten violin sonatas since the fall of 2013. This is when Utah’s NOVA Chamber Music Series began its Gallery Series at Salt Lake City’s Art Barn. Now the Series has expanded to another small venue, Julie Nester Gallery in Park City.  This most recent concert took place this past Thursday evening April 16, 2015.

The NOVA Subscription Series — six concerts a year from September through May — takes place in Libby Gardner Concert Hall at the University of Utah’s School of Music. The Art Barn and Julie Nester Gallery are much more intimate venues, which have far more limited seating capacities and more inviting acoustics — almost as if you are on stage with the musicians. The sound is tactile in its immediacy – I felt like I could slide my hands through the waves. Yet Julie Nester Gallery in Park City is a venue with an acoustic space somewhat more expansive than that in main room of the Art Barn.

The second concert of the Gallery Series took place in February 2014, and the third one this past November. This Thursday Hardink and Eberle performed the last two of Beethoven’s sonatas for violin and piano. Klavierstücke No. 6 and Klavierstücke No.7 by German composer Wolfgang Rihm were also on the program.  No. 7 ended the first half of the concert, and No. 6 introduced the second half. This choice of composers — Beethoven and Rihm — provided a clash of sounds that made one listen with renewed intensity.

Beethoven was born in Bonn, Germany in 1770, while Wolfgang Rihm was born in Karlsruhe Germany in 1952, Karlsruhe is not that far from Bonn — just 175 miles southeast. Rihm is still composing – indeed, he received the Grawemeyer Award at the end of last year, with its $100,000 prize. His 15-minute orchestral work IN-SCHRIFT 2, published in 2013, propelled him to the award. Wolfgang Rihm is that rare — at times bewildering — beast for some concertgoers:  the living composer. His seven Klavierstücke, composed from 1970-1980, are not cornerstones of the solo keyboard literature, and it is doubtful that they will all become so in the future. But some of them — tonight No.6 (completed in 1978 and subtitled “Bagatelles”), inspired by a painting by Kurt Kocherscheidt, of a chalk image with the figure of a keyboard transmuted into curving lines — can stake a claim to a need for more performances. 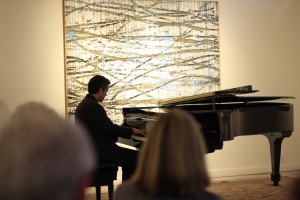 No. 7 (1980) — so densely textured, impulsive, willful, and wild – what a dynamic range within forte markings!! — is rather inscrutable, even with the composer’s insights into its composition. It was inspired by several figures from Beethoven’s last piano sonata. The harmonies and textures are almost brutal. Yet Hardink’s performance diligently searched to enliven this difficult sonic terrain and even transcended it at some moments. The at times richly textured, lucid drama of No.6 was fully explored, with an intensely moving sense of concentration.  Harmonies slowly attempted to coalesce. There was a palpable sense of stillness, reinforced by often spare chords, and slow, slug-like bends in the harmonies. Rihm is a prolific composer, but his compositions for solo piano are not all that extensive, and are an underexposed part of his art. It was almost exhilarating to witness them deciphered by a performer convinced of the worlds that they might evoke.

Beethoven’s Violin Sonata No. 10 in G Major, opus 96 was the first piece of evening’s program, while No.9 in A Major, opus 47 was the most suitable choice to end the concert and this round of the Gallery Series – it is perhaps his most symphonic violin sonata. Beethoven’s ten violin sonatas are cornerstones of the violin sonata repertoire, and a challenge for any violinist and pianist. There are benefits to be had from experiencing the same violinist and pianist play all of them over a concert season or two. The benefits were evident in this performance and the three other concerts: a sense of a lyrical and emotional odyssey minutely but also expansively observed. Throughout the Gallery Series, Eberle’s violin playing has been vital, decisive, and flowing.  And Hardink’s pianism has been nimble and full-bodied.  On April 16, the two wove a compelling tapestry of harmonies, textures and colors. Both Eberle and Hardink, at their best, are exceptional musicians.

Sonata No. 10 for Violin and Piano was completed in 1812, and first performed late that year. The first movement Allegro moderato’s delicately shaded lyricism and colors were alluring, like a steadily flowing stream. The second movement Adagio espressivo’s sense of gently wafting but hard-won serenity involved a natural give and take in dynamics, with colors etching into gently burning embers. The brief third movement, a skittishly pointed scherzo, lasts about two minutes, and was rhythmically playful, with driving phrasing, and this continued in the fourth and final movement, marked Poco allegretto, which was lightly but at times vigorously lithesome.

The Sonata No. 9 for Violin and Piano is subtitled “Kreutzer.” It ended the evening’s performances. Rodolphe Kreutzer (1766-1831) was a famous French violinist who met Beethoven in 1798 in Vienna. It is unclear if Kreutzer even played the piece. It was composed in 1802-1803, and first performed in 1803.  One could say that the rather tempestuous first movement, marked Adagio sostenuto – Presto, had it all in this performance:  a sense of urgent diablerie, a tensile intensity to the phrasing, and a lyrical fluency. Perhaps there was a little too much poise in a few fleeting moments, but there was just enough of a sense of abandon. The lyrically intense and at times dashing second movement Andante con variazioni was taken at a deliberate pace, and was supple, direct, and convincing. This movement evoked a delicious sense of humanity at play with its emotions. The glinting rhythmic drive of the third movement, marked Presto, exhibited a plaintive joy, with no special pleading. Articulation was rugged and precise, and phrasing had a vivacious sense of line.

There will be another concert with the same program this Sunday April 19 at the Art Barn at 3 pm. Hopefully the Gallery Series, with Jason Hardink as artistic director, will continue this autumn and into the future with other adventurous and challenging repertoire combinations, of both old and modern music. We need invigorating performances of both. NOVA confronts this dilemma with verve and dynamism.