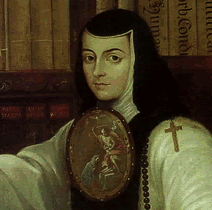 Sor Juana Inés de la Cruz, O.S.H. (1651-95), a 17th Century Mexican nun, was one of the most brilliant intellectuals, poets and playwrights of her time and beyond. And earlier this month Artes de Mexico en Utah and the Utah Humanities Council launched the Sor Juana Prize, a statewide prize for original writing in Spanish. This year, the prize will be awarded for a poem written in Spanish by a Utah high school student. The $100 cash prize will be awarded at the Utah Humanities Book Festival this October.

Artes de Mexico en Utah established the prize based on the suggestion of Salt Lake City resident Jesús García, whose native Chicago has a Sor Juana Festival each year to celebrate the life and works of this poet. The Utah Humanities Council agreed to make it part of its annual Book Festival in cooperation with the Consulate of Mexico. The community service organization Latinos in Action and Spanish language online newspaper OkEspañol are partnering for outreach and for publication of the winning poem.

“Every October, people all over Utah celebrate literature at the Utah Humanities Book Festival,” says Susan Vogel, co-founder of Artes de Mexico en Utah. “Since so many people in Utah speak Spanish or are learning Spanish, we thought that including a prize for original literature written in Spanish…at the Festival would be a great way to encourage writers of Utah’s second most widely-spoken language.”

Angela Espinosa, Assistant Professor of Latin American Literature at the University of Utah and member of the advisory board of Artes de México en Utah, says, “Sor Juana was nicknamed ‘The 10th Muse’ during her time because of her ingenuity in poetry, philosophy, music and the sciences. She was also known for defending the rights of women and minorities, for whom she continues to be a role model today.”

Utah high school teachers are invited to spread the word. The prize is open to all Utah high school students (whether enrolled in a school or home-schooled) and the deadline is May 31.

The author of the winning poem will receive a $100 cash prize that will be awarded in October during the Utah Humanities Book Festival. The poem will also be published in OkEspañol.

Artes de México en Utah is a nonprofit organization that promotes the appreciation of Mexican art in Utah.