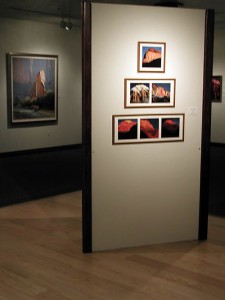 Southern Utah’s most famous attraction, Zion National Park, receives relatively few visitors during the cold month of February. This year, though, the St. George Art Museum has seen to it that everyone can enjoy a view of the park in relative comfort. With an exhibit simply entitled Zion, the museum presents to local and international art lovers a panorama of artistic views of the singular wonder that is Zion.

The exhibit features over thirty historic and contemporary artworks depicting Zion National Park. The museum has culled works from a number of collections to display a timeline of artistic interaction with this natural wonder. From Thomas Moran to Anton Rasmussen, these works reveal the vibrant colors, unique formations and matchless interplay of light and shadow that have attracted some of the west’s best painters to the park.
Two pieces by Thomas Moran dominate the beginning of the exhibition. Done in the grand landscape tradition, in relatively dark tones and with a Romantic view of the landscape, the pieces look as if they were painted only a few yards from each other, the light in one possibly a half-hour after the first.
As one progresses chronologically into the twentieth century, the palettes of the artists quickly brighten. The works by LeConte Stewart and Maynard Dixon seem to set the tone for many of the paintings in the exhibit — fulfilling the promise of some of the earlier works and setting the tone for the ones that come after.

At least half the show consists of works by contemporary artists, proving that despite its increased popularity among tourists, the park remains a place of wonder and solace for artists.

Though oil paintings dominate the exhibit, other media are represented including watercolor, wood block prints, and of course photography. Color photography is a perfect medium for the bright colors and intricate details of the rock formations in the park. The exhibit presents four winter scenes by Milton Goldstein, who uses snow to add white and purple to the redrock palette of Zion. Zion is no less interesting stripped of color as Gaell Lindstrom’s black and white photograph amply demonstrates.

The nature of the exhibit helps to create some visually intriguing relationships. For example, the Great White Throne is a recurring image in the pieces, allowing the spectator to compare how different artists have treated the same motif. 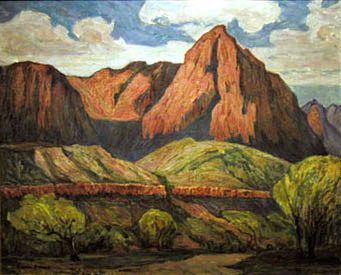 St. George may be far away from the excitement and hoopla of the Olympic Games, but this exhibit is proof that also Dixie is putting on its best colors during the month of February.

Those of us who grew up with Zion Canyon in our backyard are a small minority in this very big world. Every day of the year a few hundred, to as many as several thousand people see the place for the first time. I envy them as their heads tilt reverently back and their glowing eyes trace the towers of Kayenta and Navajo Sandstone from the Virgin River’s edge up and up and up through the sedimentary ages to where the red and white pinnacles finally break against the purple sky like the spires and turrets of otherworldly castles. I envy them because you can only see it for the first time once.
For me, that first time is one of my earliest and most profound memories, a treasure I keep locked in a very secure vault. It was more than 40 years ago, but it remains as vivid and true as if it were but a moment past. I was a little boy that day and as my chin rose I witnessed those towers of stone as they ascended into the heavens and stood like castles in the clouds. As my eyes soared to that new level, so did my heart; and the memory is so true and so cherished I can hardly recall it without fear it will all dissolve into the distant blue and be gone forever.
That is why I appreciate the art of Zion Canyon. For the past 130 years, gifted artists, from Thomas Moran to Gaell Lindstrom and Roland Lee, from Maynard Dixon to Jim Jones and Lynn Berryhill, have transformed onto canvas and paper the wonder and the mystery and the unutterable beauty of the canyon. Now, for what I believe is the first time, a selection of those timeless works has been gathered in one exhibit at the St. George Art Museum. In this unique collection are found many of the finest pieces of Zion Canyon art ever created, from the historic to the contemporary.
Beginning with “Temples of the Rio Virgin” and “Valley of the Rio Virgin” oil paintings by Alfred William Lambourne painted in 1885, and Moran’s wondrous “Virgin Del Rio,”1917, the exhibit follows the trail of the masters through Zion, from LeConte Stewart’s “Mesa Near Zion’s Canyon,” to Maynard Dixon’s “High in the Morning,”1933, to John B. Fairbanks’s “Lady Mountain,” to Lauren Covington’s “Great White Throne,” and George Dibble’s abstract interpretation of “Temple of Sinewava.” The work of more than 27 artists is represented here. It has been gathered from private collections; from the Brigham Young University Museum of Art; the LDS Church Museum of History and Art; the Springville Museum of Art; Utah Museum of Fine Arts, University of Utah; Zion National Park’s permanent collection; and the Thunderbird Foundation for the Arts. There are oils, photographs, woodcuts and watercolors, all of it alive with color and light … and truth.
Maynard Dixon once said his mind was “set to tell the truth of it” on paper and on canvas. In addition to the common subject that carries through all of these works, perhaps it is the element of truth found in each one that distinguishes it and qualifies it for this exhibit. There are many ways to get at the truth, and each of the artists represented here has found it through his or her own means.

The truth of Zion Canyon is revealed to each of us the first time we raise our eyes to the tops of its pinnacles. Sadly, we can only experience it for the first time once. And yet, during the next few weeks, it is our fortune to view these beautifully varied interpretations of Zion, and through the transforming power of art, our souls can be sparked and our hearts renewed with the wonder we felt that first time. The truth revealed in these paintings allows us to see Zion anew, again … and again. 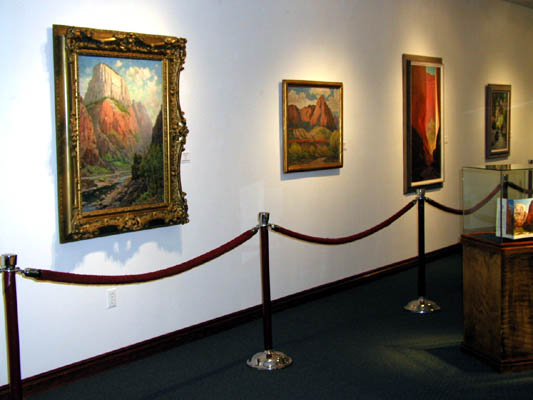 ZION will be on display on the main floor of the museum until April 13th, 2002. Admission is free.

Showing on the upper floor of the St. George Art Museum is INTERSECTION, an exhibit by Willamarie Huelskamp. Huelskamp’s works are done in water-based media using mythological imagery from Utah’s petroglyphs. The exhibit will be on display until February 23, 2002. 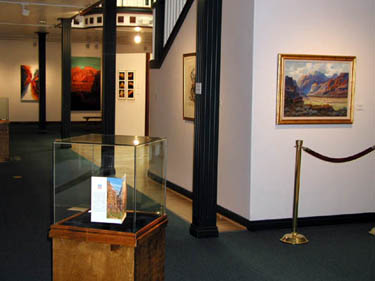