Zachary Proctor Exits the Wormhole With a Bouquet of Enigmatic Narratives 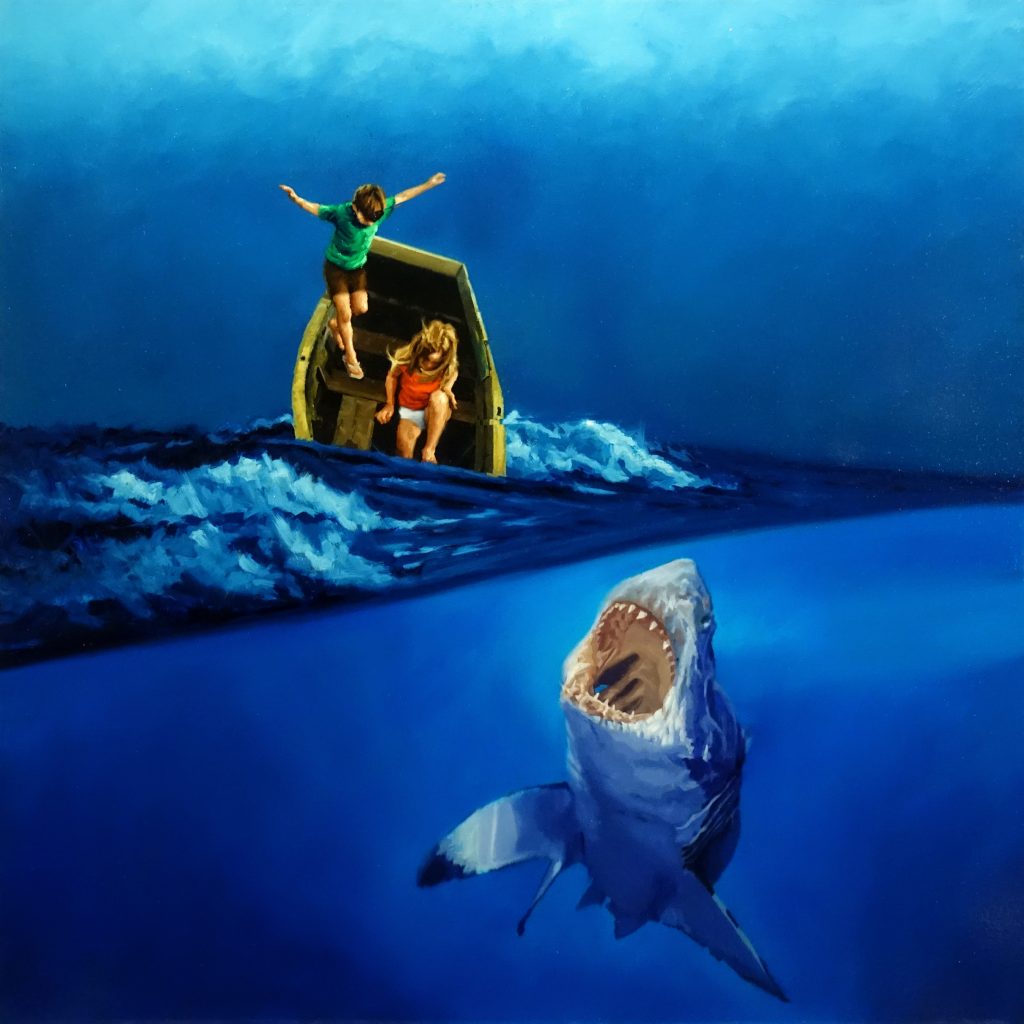 Planning is useful. It provides structure, focuses energy. But, as Zachary Proctor’s new works at Park City’s Terzian Galleries attest, getting lost in the work has its advantages as well. In Destinations Unknown, Proctor is exhibiting with longtime friend and past exhibition partner Lane Bennion. The pair usually organize a show around a common theme. “This time we wanted to start paintings and not know where they would end,” says Proctor. Gallery owner Karen Terzian approved, so they’ve been spending the past five months “finding our way down wormholes we didn’t expect.” Proctor’s results are some of his most surreal images to date, works that are dark, funny, unsettling — sometimes all in the same canvas.

Proctor frequently employs nostalgic reference materials in his work, mining images a generation or more removed from his own. Recently, these were mid-20th-century racing cars and motorcycles, like the old Formula One that crashes into a wood fence in a work that appeared at Finch Lane’s Square One exhibit last year. There was usually a narrative quality to these works — whether they depicted a dramatic crash or the moments before and after a race — but in Proctor’s most recent works the narrative qualities have intensified while also becoming more enigmatic. This may have something to do with his working process, where he collages together various images to create a painting. “An idea will spark in my head, then I’ll start the painting,” he says. “But a missing puzzle piece shows up and I’ll have to reflect on where to find it or just let time pass until it reveals itself.” 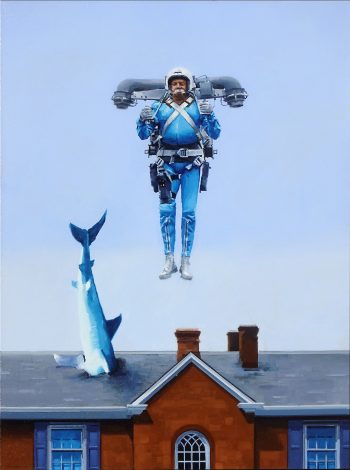 In “Crisis Averted … For Now” a man in the sort of jetpack our grandparents thought we might be using to avoid traffic in the future is seen hovering above a house where a shark is diving into its roof. It has the deadpan, surreal quality of Rene Magritte’s paintings. “I had stumbled on to an old image of a man flying in a makeshift jetpack,” Proctor says. “I liked what he was trying to do, but I needed to find a context for his efforts.” He came across the shark image, but didn’t like the house — the perspective was wrong — so he found another.  “In that process, the subject and the concept evolved and told me what the painting was communicating and I had to respond.”

A shark appears in another, more unsettling work. Two children are depicted in the open ocean, their rowboat tipping, the girl’s right leg already submerged in water, the boy leaping (or falling —  it’s unclear which) into the depths. Beneath awaits a large Great White, its jaws ominously agape. With its resonances of heartwarming stories of faith and resilience, the title, “And Yet They Had Hope,” makes the image both less disturbing and more.

Proctor says he finds his titles as the paintings evolve, using a variety of sources, from the music and audiobooks he listens to in the studio to books of poetry and scripture.  “I keep a small sketchbook in my pocket and write interesting things down when I hear them.” The common design guideline for photographers provides the title for “By the Rule of Thirds,” a composition full of triplets: birds, drinks, card players, vehicles. “This painting started because people would talk to me about paintings of ‘card players,’” Proctor says. Not the famous ones by Cezanne or Caravaggio, but their kitsch progeny —  “some joked about paintings of dogs playing cards, others showed me paintings of the presidents playing cards. I just kept adding things that felt like a car crash of clichés.”

If you find yourself taking a while to decide what each painting is saying, know that the process of their creation can be equally difficult.  “The only problem with [my] process,” Proctor says, “is that it takes a lot of time and paintings sit around for a while working themselves out. It’s sort of like waiting for flowers to bloom.” 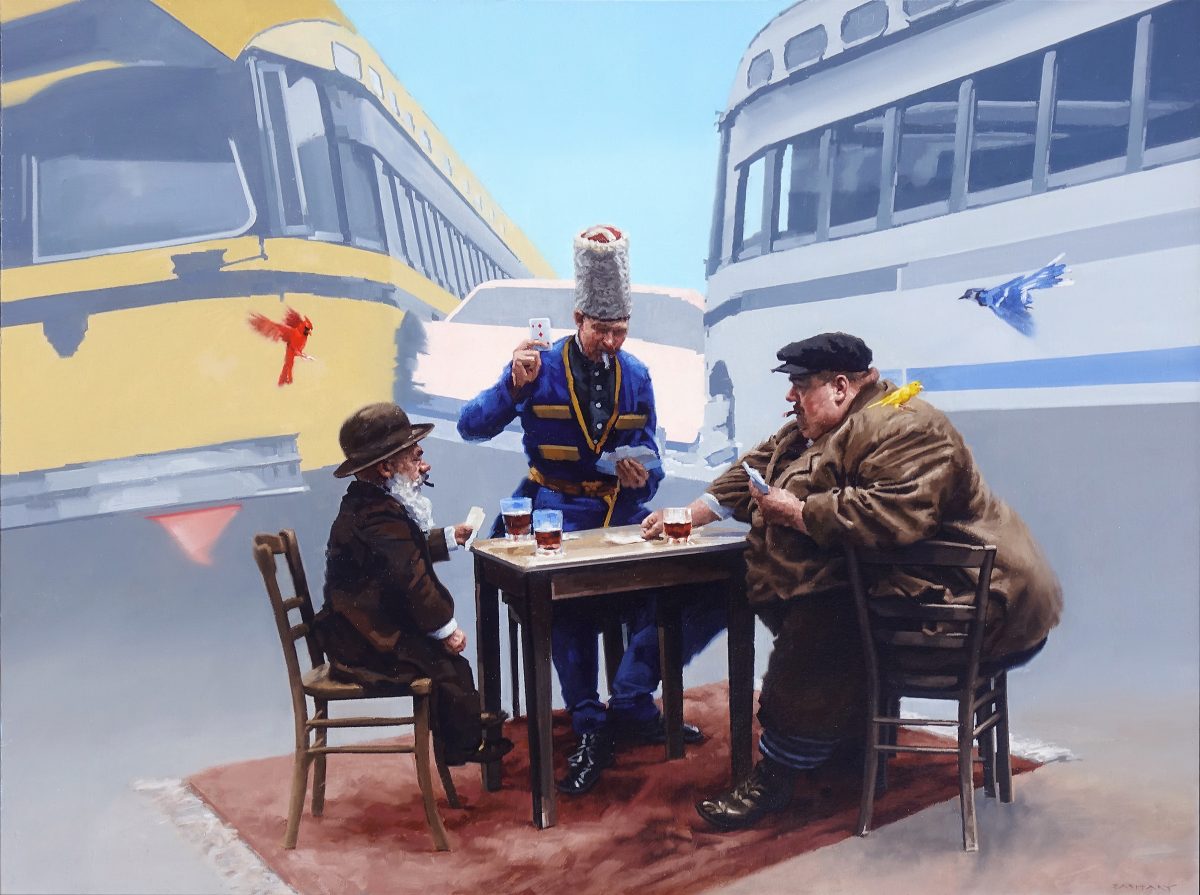