Your references, please? Judy Csotsits and Rogelio Manzo at White Space in Ogden

The new Whitespace gallery, across Wall Avenue from the Union Station in Ogden, opened with an impressive array of artworks emphasizing noteworthy materials rather than familiar names or genres. For instance, photographer Koh Sang Woo knows that documentary photographs are old news; his digitally manipulated color images, like “Farenheit,” generate neon dreams in which what remains black and white acquires powerful, three-dimensional texture and presence. Emil Alzamora’s figures contrast expressive exteriors that seem to belong to materials—like rusted iron—that could scarcely do what his sculptures demand of them. The featured artist, Rogelio Manzo, fashions larger than life-sized heads by assembling layers of imagery, creating the illusion of depth by the clever method (as an old artists’s joke says) of using actual depth. He covers slabs of transparent resin, both back and front, with congruent variations on the subject’s visage, until a compound portrait, sometimes self-reinforcing and sometimes self-canceling, emerges. Whether the technique supports his claim that it “can reach inside and expose the secret stories and identity of its sitter” remains a question each viewer will have to answer personally. Hyperbolic claims seem to be the necessary fuel of today’s art. 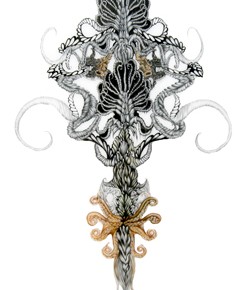 Detail of Poly by Judy Csotsits. 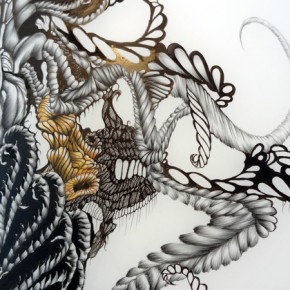 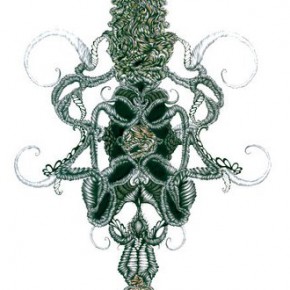 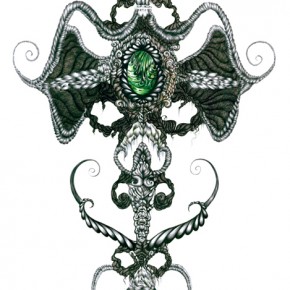 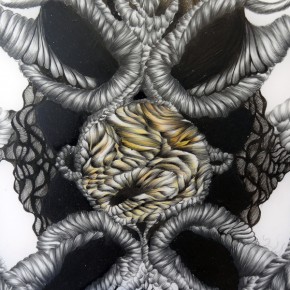 Detail of Hive by Judy Csotsits.

Perhaps the most sensitive use of material is seen in Judy Csotsits’ large ornamental fantasies in pen-and-ink, acrylic, and colored pencil on white mylar. Not unlike Manzo’s slabs of resin, the rolls of creamy white mylar Csotsits draws on are translucent: light entering them diffuses and reflects back as a luminous aura in which soft grays, transparent colors, and black lines come forward with varying degrees of force, while areas of opaque black ink, bereft of light, open a range from void to abyss. The optical massage is sensuous, but the real treat is her imaginary subjects. The question just what these mysterious-yet-intriguing figures represent will not be answered by their equally-yet-independently evocative titles: “Poly,” “Butterfly,” “Hive.” They invoke nineteenth century architectural ornament—the stuff Modernism exiled from the twentieth century—into which symmetrical confections Csotsits works plant and animal parts and details on medallions. She wraps archaic unity around a twenty-first century melange of search engine results. Close in size to their viewers, the drawings are wonderful to take in, filled as they are with evident effort expended, like so often in this world, for no immediately apparent purpose.

Csotsits’ drawing brings to mind the proposal made by Sunny Belliston Taylor in her video interview in the current 15 Bytes. Instead of masking challenging works behind verbal articulations that, while comforting, tend to close down the viewer’s encounter with the work just when it should be opening up, the effort should be towards letting go of intellectual interference in favor of encouraging whatever feelings the work invokes. Then, if desired, viewers can apply their cognitive curiosity to their own responses: studying the art further by observing themselves. Music, the most abstract of all the arts, begins with actual sounds made by rubbing, striking, and blowing through familiar materials: real sounds then put together by the power of the imagination. Like Sunny Taylor, Judy Csotsits calls attention to inordinately mundane textures and patterns that she quotes in visual fragments. It’s not necessary to identify their sources; once out of the studio, paintings refer to any reasonable viewer’s hypothesis. Rather, we stand with them, in contemplation, as long as it takes: until we begin to hear their music.

Whitespace Contemporary is located at 2420 Wall Ave. in Ogden. The current show, hosted by  PATRAJDAS Contemporary, features painting, photography and sculpture from across the US., with a special focus on visceral paintings by Rogelio Manzo, of Sacramento, CA and a photographic study of texture and color by Amelju, of Ogden. Their July exhibit, Today’s Paper, features political collage by Tm Gratkowski of Los Angeles, Judy Csotsits of Oakland, and Brian Usher of Salt Lake City.  It opens Friday July 5, with a public reception from 6-9pm and runs through July 30.