You Are Here: Svavar Jonatansson and Jared Steffensen’s Takes on Place at the Kimball Art Center 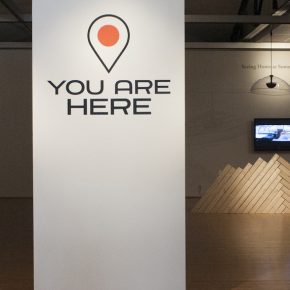 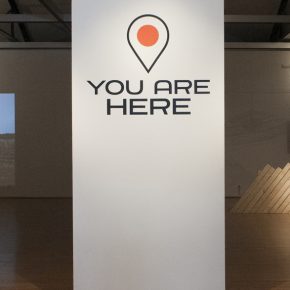 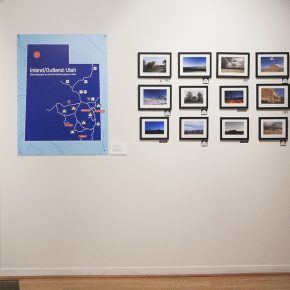 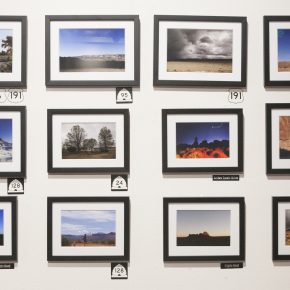 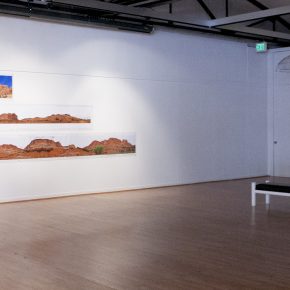 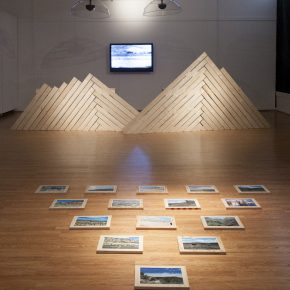 This summer Park City’s Kimball Art Center is preparing for a big move: in September, after 39 years on Park City’s Main Street, the Kimball will be relocating to a new temporary home a mile away in the Bonanza Park area. They will continue to operate out of a former church while they draft plans for and await the construction of a new permanent home. As they enter this dramatic stage, You Are Here, their final exhibit in the Main Gallery, examines place from within and from without.

For his portion of the exhibit, Icelandic artist Svavar Jonatansson came to Utah twice, travelling major tourist arteries and capturing the experience with his camera. Entitled Inland/Outland: Utah, Jonatansson’s exhibit comes in three related parts: one wall features a large projection of a video Jonatansson created with Utah-based composers Matthew Durrant and Devin Maxwell; a second wall features three long panoramic shots from the Colorado Plateau; and a third features small prints of images taken at points along some of Utah’s scenic drives, their locations indicated by a nearby map.

A couple of these smaller images are striking, a stormy sky descending on a far plateau or Arches’ lunar landscape seen beneath the light of a flare; but if you’ve been into any gift shop in the state you’ve seen something similar (and frequently better) from our local photographers. The panoramic shots are remarkable for their length (the longest is 332″ x 17″), but the shots themselves are not particularly dramatic. If you’ve purchased a smart phone in the last year or two you’ve used a feature on your camera to create something similar.

The video component of Inland/Outland: Utah is a more sophisticated creation. Played on a 30-minute loop, the video explores four scenic routes in Utah: Arches, Capitol Reef, Monument Valley and the Salt Flats. What is shown is not simply a video from the car as it travels through the landscape but hundreds of images stitched together to form a stop-action film of the ride. Imagine you held out your camera and kept it on auto shutter all the way to Wendover and you get a sense of what the Salt Flats portion is like. Rather than a continuous gaze, the video mimics the thousand glances out the passenger window a driver might make, distracted by the majesty of the landscape s/he is passing through.

The video feels almost like it wants to say something about the nature of travel, something about how we see the world from the side of the road, our experience of the landscape being prescribed by the work of a surveyor long dead. But it doesn’t quite get there, and the other portions of the exhibit — which feel like a glorified Flickr account — are too earnest to imagine that the video is a deconstruction or critique.

Occupying the other half of the main gallery, Seeing Home as Somewhere Else is an installation by local artist Jared Steffensen that is most certainly a deconstruction and critique. For the video component of his installation, occupying the same relative wall as Jonatansson’s video projection but displayed on a modest-sized monitor, Steffensen has spliced together tiny chunks of films that use the Utah landscape as a backdrop but not as an actual part of the plot. In these clips, our mountains and redrock cliffs may be used as a setting for a sci-fi adventure, a prehistoric epic, or any number of westerns set in Arizona or Texas, but never as the place it is. The clips come quickly, butting up against each other so that the images and discordant soundtrack create a frenetic and disjointed experience that is a marked contrast to the smooth-flowing experience Durrant and Maxwell’s soundtrack help create in Jonatansson’s piece. The video seems to be a local boy’s response to scenic carpetbaggers, who use the landscape without actually engaging it.

A second part of the installation could be read as a direct response to Jonatansson’s installation. Steffensen’s images, similar to Jonatansson’s in that they depict scenes from Utah’s roadways, are less majestic, giving a broader, more prosaic image of what Utah is, even from the road. They also call greater attention to the mechanics of their creation: images taken near each other are spliced together to create a stuttered effect, a representation of the motorist’s experience of the landscape more true than Jonatansson’s fixed lens.

We’ve all been guilty of it — visiting an exotic locale, taking a few shots of its iconic attractions, and feeling like we’ve captured the essence of the place. If we’re alert, we come home and realize that everyone else has a shot of Venice’s gondolas from St. Mark’s Square, or the winding streets of Montmartre (and that all the people in the shots are tourists) and wonder if there wasn’t something more to be discovered. Our backyard is such a locale for millions of tourists from across the country, many of whom visit the national parks as quickly as we might Rialto and St. Mark’s. Those of us who live here, though, know what the place looks like from within — the myriad attractions tucked away into cliffs and canyons far from the motorist’s gaze.