Yolande Harris at the Woodbury Museum of Art 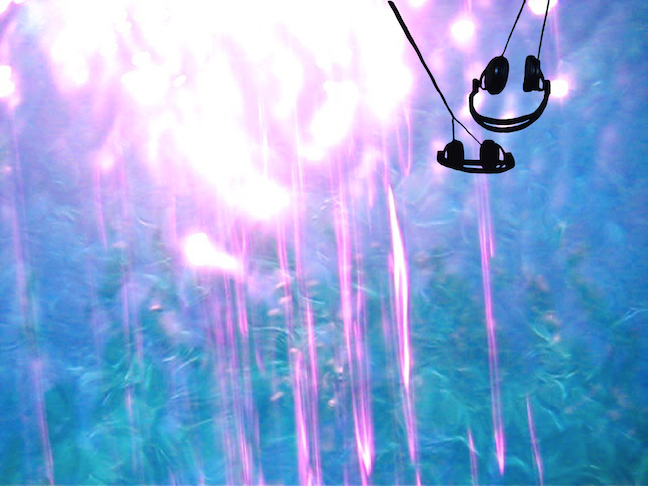 If the entire goal of Yolande Harris’ multiroom installation, Listening to the Distance, was to integrate sound and visual media into unified works of art, she’d be late getting to the party. Twenty-five centuries ago, Greek thespians wore masks and danced onstage while the chorus sang responses. In the 19th century, Richard Wagner proposed the Gesamtkunstwerk, or total work of art, that would provide a comprehensive synthesis of all the arts, which he meant to achieve in the opera house, but which promise may have been most nearly fulfilled by the modern IMAX 3-D movie. But as her overall title suggests, Harris isn’t so much interested in a new form of multimedia as she is in upending the way we use our senses. And yes, while she begins with hearing, the several silent works here demonstrate that the implications cover the range of human sensations.

There are eight distinct works, some standing alone and others sharing space. Some provide ambient sound, produced by loudspeakers and variously audible throughout the gallery, from a comfortable listening volume near the visual elements they accompany to a whisper in remote rooms. Some of the sounds come from headphones, which at times are found on a table, while at others they hang provocatively in space. “Pink Noise (The Pink Noise of Pleasure Yachts in Turquoise Sea)” features a shifting image of sunlight reflecting off water that is projected on the floor. The headset hangs above its center, requiring walking into the projection as if standing on a boat and looking around at the sea—or walking on the water without benefit of boat. The soundtrack was recorded in the same place as the film was shot, providing a multi-sensual experience nothing like ”virtual reality”—the holy grail of computer projection—but evocative of a much more personal and polymorphous, open-ended encounter.

Although all of the soundtracks are collages of natural sounds overheard, they vary from the gentle lapping of water to machinelike buzzing and clicking. Several have the ability to lull the listener into a reverie . . . or perhaps they each have that potential for the right listener. Although the visuals are anything but trivial—“Listening to the Distance: Eagle” features a rare close-up view of an aerie of Bald Eagles in their natural habitat—the revelation of the sound pieces is the way they invert the priority of sound. Where we habitually foreground sound, using sources like our computers and cell phones, earbuds and TVs, and focus on a very limited range of audio information, like music and conversation, Listening to the Distance recommends turning down loud and close noise in favor of the natural sounds behind and beneath them. The world’s ambient sounds, shut out by buildings, cars, and urban noise, were the natural environment for millennia, and while they are largely lost to us, we are genetically and neurally wired to receive and respond to them. It doesn’t take very long in the gallery before the overlapping sounds begin to work their magic. The sound collage of wind, rain, wind, and thunder heard in Mississippi River Tornado made taking off the headphones a poignant and regrettable necessity.

Light Coming Into My Bedroom fills a space in which the only sound was truly ‘ambient’—the noise of the adjacent shopping mall coming as close to silent as the gallery allows. Here two corners of a dark room are lit by dim, cool light, as if by the moon (or perhaps a street light). The scene is warmed up by the dancing, wind-blown shadows cast by trees or shrubs. I was reminded of riding in the backseat of my parents’ car late at night, watching passing lights sweep over the car’s interior. Such ambient, accidental light forms an analog to ambient sound. Conventionally ignored in favor of illuminated stimulation, such lights have the power to calm the agitated modern psyche.

The most successful art teaches its audience, sticks in the mind and gives the lie to the old argument about art being solely for art’s sake. While all of the works here urge the viewer to adopt a new, more rewarding orientation toward the real world, not all look back to the past or rely on familiar tropes from ordinary life. Navigating by Circles/Sextant features a complex, multistage depiction of the experience of celestial navigation at sea, the challenge of capturing a bobbing image seen through a telescope from a rolling vessel being probably more familiar from literature than from life. Compared to a deep-sea voyage, driving a long road that passes through terrain ranging from rural to urban sounds positively mundane. But El Camino, which uses GPS plotting to precisely chart, yet erase the context of such a trip, suggests that as we become more alienated from our own experience of navigating our cars, knowing where we are between termini could become more like being ”at sea.“

There’s a certain irony in the high-tech methods Yolande Harris uses here to bring about awareness of natural and ”distant” sounds. Whale Song even offers the epitome of liberation from traditional sound reproduction—wireless connection—to allow listening while strolling the entire gallery. Someone listening to whales on a headset while walking in the woods would pretty much define ”missing the point.“ But artists have always distilled and domesticated the experiences they encode in more or less durable materials and forms. Most of us spend far more time consciously looking at media images, listening to media sounds, dwelling in a ”mediated” world, than we do consciously noticing the vast sensory universe we’ve allowed them to replace. In Listening to the Distance, Harris uses the concentrated reproductions modern technology permits to lead viewers back, not into a world without technology, but to an awareness of its role in mediating human senses with their sources in nature.