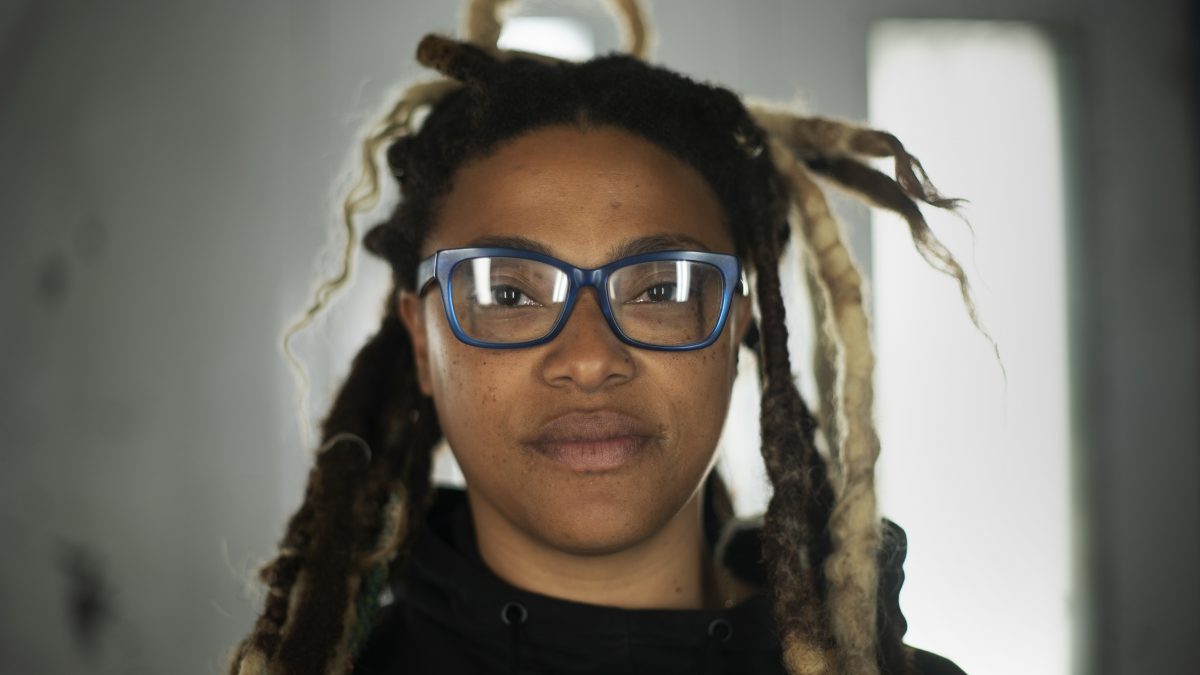 Ya La’ford’s artistic practices are as multifaceted as her lived experience, spawning abstract painting, public art, video, sculpture and installation. The child of Jamaican immigrants, La’ford exudes the sort of palpable energy derived from a life of incredible ambition and achievement.

While her methods are varied, her work shares a common interest in isolating the patterns that unite a community. Such patterns are both tangible — her geometrically intricate mural work and public art design for the St. Petersburg Museum of History in Florida among the most fascinating examples — and conceptual. Indeed, the act of arriving to and exploring within the various communities her work has taken her to — South Africa, Columbia, Egypt, and Thailand to name a few — is an integral part of her site-specific practice. Now, she will add Utah to the list of places for which her artistic experimentation may find new and fascinating iterations.

The gallery’s main floor boasts natural light and a street view, along with a digital art room and a wrap-around second floor gallery space near designated artist lofts for the new AIR program. La’ford plans to utilize the space in creative ways for her three-month residency, which she hopes is an immersive and thought-provoking experience for the residents of Ogden. Her residency will culminate in an exhibition slated to open June 3, 2022.

I had the pleasure of speaking with La’ford on a Monday afternoon shortly after her arrival in Ogden. She emanated warmth and enthusiastically spoke about her initial impressions of Utah, while we sat on circular cushions and an impressively large and beautifully ornate rug which La’ford brought with her from her from one of her home bases in Tampa, Florida.

La’ford emphasized her interest in uncovering the community underlying the sites to which she travels, places she often researches in addition to forging connections with residents. Shortly after her arrival in Ogden, she spoke with regional high school students, inviting them to answer what they consider special about the place they live in.

“In my work, I’m usually uniting and connecting people while thinking: how can we bridge new landscapes to humanity and how can we make humanity go through a more positive and more beautiful space by examining how we were built?” she says.

Like thousands of us, her relationship to place and the spaces we inhabit underwent massive alteration due to the pandemic’s isolation. “One of the first things we started to look at [upon our return to normalcy] was to really delve into and explore our own landscape of America,” she says. 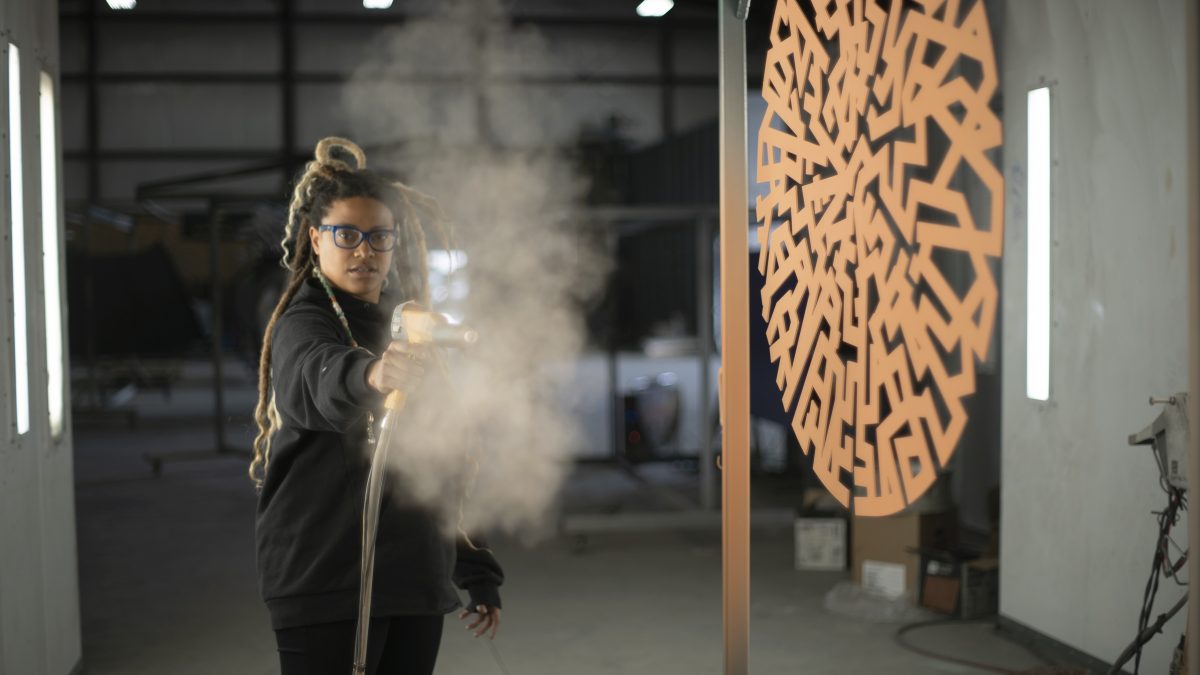 She admits that she didn’t consider visiting Utah before hearing about the opportunity at OCA through a former classmate of hers, Weber State Shaw gallery director Lydia Gravis. “I don’t know why, or how, but I missed Utah. It has been life-changing for me to explore how beautiful the West has been. Exploring the West has been somehow the most amazing and almost earth-shattering for me and my practice. I’m used to such a different landscape. A different and really amazing kind of vibration is happening here,” she says.

La’ford’s curiosity is infectious. Her thematic interests and artistic approach is consistent, yet notably, she retains an openness to taking directive from the new sensations she encounters in the places she discovers. As with all the places to which she has traveled, she is fascinated with the formation of the city’s local identity and has already scrupulously researched the history of Ogden, taking fascination with the convergence of cultures and immigrants that converged to build the Transcontinental Railroad.

In addition to the state’s history, La’ford was instantly taken with Utah’s natural wonders. “I thought I was going to focus on the stars, but after driving through Utah, I was amazed at how this amazing architect called the universe sculpted these mountains over the course of millions of years. These mountains really made me aware of the true scale of things, of us on this earth,” she says.

She arrived in Utah after traversing the country in a camper van, taking her family along for the ride as the group explored specific sites in Utah, Arizona, and Nevada. She identifies the symbolism of traveling across America as many thousands have done before her. At each of these sites, La’ford collected stones and sand, which she will use as pigments for a series of abstract paintings. Her process involves turning the stones into pigment and pressing the material on the back of a large canvas, while also crafting patterns on the canvas’ front. This process, which she refers to as “explosive” takes inspiration from the Abstract Expressionist movement, an art historical chapter that fascinates La’ford and reminds of her time in the highly interdisciplinary studio art program at the Art Institute of Boston, where she did her MFA.

In addition to these paintings, La’ford hopes to explore sound and video for an immersive installation that pushes boundaries and invites in new viewers to OCA’s space. Her own life has been an example of pushing boundaries. In addition to traversing the globe, La’ford is a former attorney. She sees the relationship between the two crafts as an exercise in traversing different landscapes.

“There is a beauty of exploring space through a creative lens, instead of [through] case analysis, I’ve used those tools of analysis I learned from my law degree, which helps me synthesize, analyze, cultivate, and think about how I take a situation and a landscape and do something further with it,” she says. (La’ford’s comparisons of the practice of law to the practice of artmaking resonate with me as an attorney who maintains a passionate commitment to the arts.) “Two of the coolest places I’ve been are Aswan in Egypt and Thailand. Both of those spaces hold sacred the past, the present, and the future and I’ve found that connection here,” she says.

La’ford is at ease talking about her work and among the most engaging artists I’ve conversed with. She manages to impress the unending implications of art to connect people while possessing a remarkable optimism that you simply can’t help but share when you speak with her. In a time rife with division, this message is an opportunity to reignite the imagination. 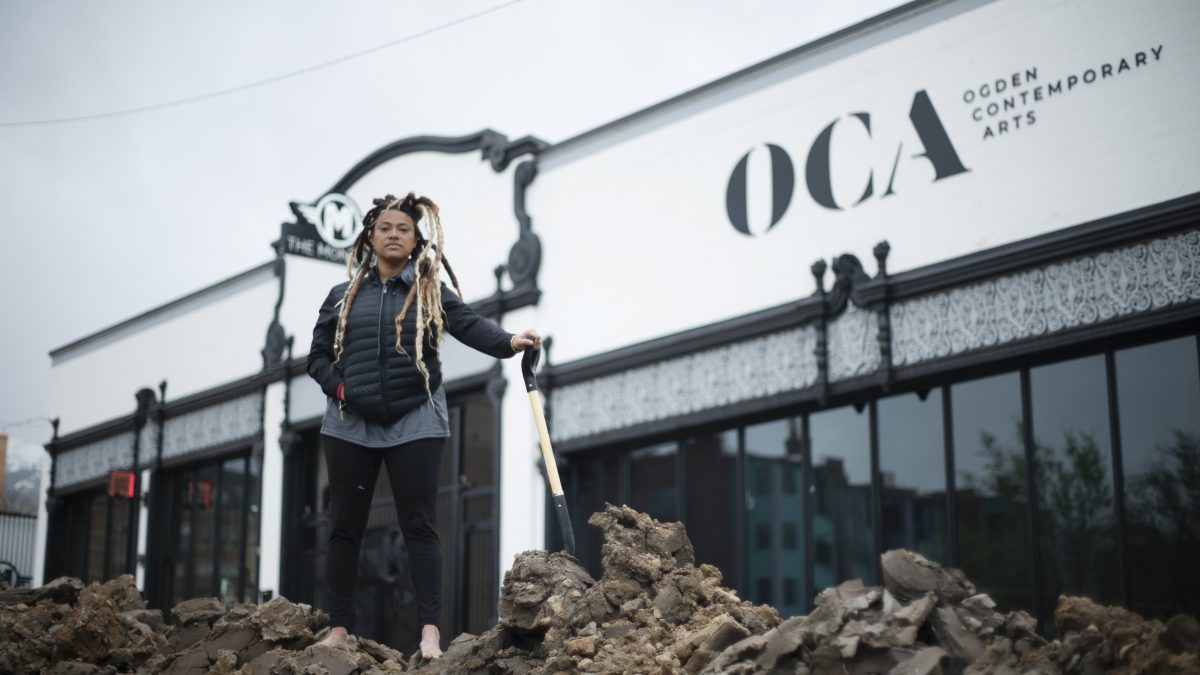 La’ford, digging in the dirt outside Ogden Contemporary Arts – as she travels, the artist natural materials that she turns into pigments (photo by Eden Buxton)

This article is Part One of a two part series on Ya La’Ford’s artist-in-residency at Ogden Contemporary Arts.