Wrestling with the Self: Andrew Moncrief at UMOCA 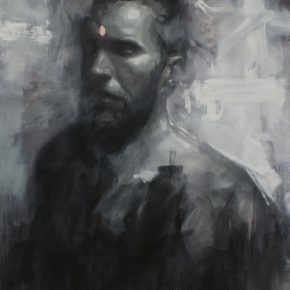 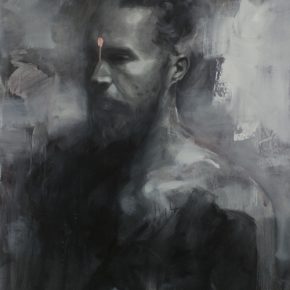 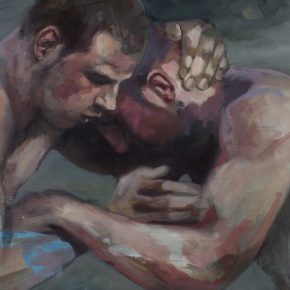 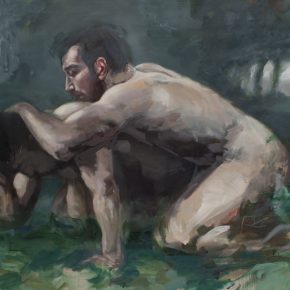 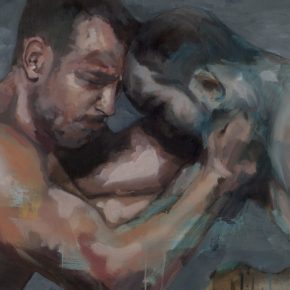 When ancient Greek city-states vied against each other, not in ruthless combat but in the more civilized arena we now call the Olympics, they were transforming the frequently violent but seemingly ever-present desire for conflict into a ritualized and artistic form of competition. Foremost among these was the essential form of man-to-man conflict, wrestling. Strange Feeling, Andrew Moncrief’s new show at the Utah Museum of Contemporary Art (UMOCA), taps into this ancient sport to challenge the absolutes of traditional norms of male-to-male aggression for the sake of supremacy, and explores his own feelings and experience, to deconstruct what is a given, taken for granted, in order to explore a deeper and more penetrative understanding of possibility.

Moncrief is from Vancouver Island, British Columbia, where he began his formal art training at the local North Island College before relocating to Montreal to attend the Fine Arts Program at Concordia University, where he earned his BFA in 2013. During his education, he developed an interest in classical studies, and a formal approach to the figure and rendering. This is essential to the progression of his art, which can range from the literal to the decomposed. Says the artist in his statement: “Stating a resolve for something unresolved is inherently contradictory, a search for that which can’t be found. The point is not the end, but rather the means to the end—the search, the journey itself, and those overwhelming, split-second moments of clarity and enlightenment. The journey is not the attainment of an answer, but the being of the question.” In this Zen-like approach to discovery and attainment, he maintains a sense of seeking and searching, while knowing there will be no end to life exploration. It is how his figures are rendered, the level of abstraction, color, expression, value, texture and mood that lend his canvases their expressive force as well as their communicative power.

In a pair of canvases painted in 2015, we see the same portrait figure, each with a like composition, but subtle differences between the two grant conceptual meanings also found in the titles. The figures exist within spaces that are dense, hardly breathable, seemingly swallowed up by mood and the substance of the subject. The artist renders an upper torso portrait of the sitter, entirely composed of tonalities of light and dark, with intense volume, depth and dimension, as well as stark definition of clashing of light and dark. The two mirrored portraits, at first, seem identical, even with the heavy gestural brushwork, but in the first, “Found,” the eyes are closed, in the second, “Lost,” the eyes are opened. Regarding this work, the artist states; “This work is uncertain, it is existential; the figures—lost and vulnerable—are inevitably me.”

Moncrief’s exhibition of six works at UMOCA is an ideal marriage of subject and content, both bold and subtle, grabbing one’s attention but also igniting a wealth of meaning on closer exploration. It is the result of his recent sojourn in Salt Lake City—where he has friends—that offered a change of scenery and a chance, at Captain Captain studios, to work in a vastly larger studio than the one he occupies in Montreal.

These canvases each convey a pair of wrestlers, a tighter painterly method applied to the body, with liberal nuances of the form, including stroke and color, to express extremes of bodily and facial intensity. They are in darkened natural settings, which add to the intensity and ambiguity of the figures, who are locked in poses and positions that call to mind classical wrestling grips but are imbued with sexual overtones. The act of male-upon-male aggression in these painterly and compositional contexts read as a conceptual essay into a range of male relationships, from pure physicality, to energy and the emotion of sexuality.

“The Admiration,” a closeup view of two men, arms locked and heads pressed against each other, looks like a beginning grappling stance, but is just as convincing in other contexts, as two men in a moment of emotional or physical support, be it fraternal, an intense friendship offering comfort and solace in a time of intense grief, pain, suffering, or amatory. The color is overwhelming, not quite red, but a soft and purer magenta, even pink, with icy blues to temper the situation that may be a kinship of encouragement, and ultimately, the bearing of weight of another man, whatever the relationship may be in this situation, spanning the gamut of male bonds from competition to an intense love.

Along the same lines of male wrestlers, but deconstructing the stereotype of what is seen and commonly understood as simply the worldly concept of power, is the emotively felt “Innocence,” with its richly complex composition. The fighter to the left is rendered in loosely natural flesh tones, in patches of color that add to the figural intensity and gravitas of what is seen on his face, which is more clenched than his blurred fists, as if his concentration of all sensibilities is focused inward, while his robust arms are extended only to block the blows of his opponent. It might simply be physical pain or emotional turmoil, he may be holding back tears, but he suffers. Even more is the figure to the right, rendered in tones of cold, steely blues and near black that completely hide his face. This face buries itself in the oncoming arms of the left wrestler, and the effect turns from aggression to a clinging, holding each other, holding on for the sake of life itself; an expression of love is more than possible.

And Moncrief does not shy from this emotional dynamic, as he explicitly uses nude male wrestlers as an ultimate manifestation of physically sexual male interaction. In the large-scale “The Imprudent Boy,” combative angst finds an aggression released in sexual expression and fulfillment. “Boy” might be assumed as the dominating of the two, yet both have pale flesh of youth and beauty and the image abounds with aggression, sexuality, love and innocence. “Rest at Harvest” is no less innocent, yet the canvas suggests a mature and deeper assertion of the strength and potency of the male bond, of the physicality of male-to-male support and togetherness, with its underlying currents of sexuality and aggression.

Moncrief’s oeuvre may be described as an impossible desire to understand, and only through experience and the relationship of learning from a sense of discovery does the artist learn and discover, discover and learn, through this cycle applied in paint. The potent nature of these paintings, their conflicting surges of intimacy and aggression may or may not reflect Moncrief’s current experience as a gay man, but they certainly reveal a poignant artistic exploration of the ambiguous and sometimes conflicting nature of human experience. “These paintings have no answers,” says the young artist. “Instead, they are intended to act as self­referential questions that inevitably fail in their ability to be defined. This desire to define the figures relates to a direct desire to define myself, a seemingly impossible task for me.”