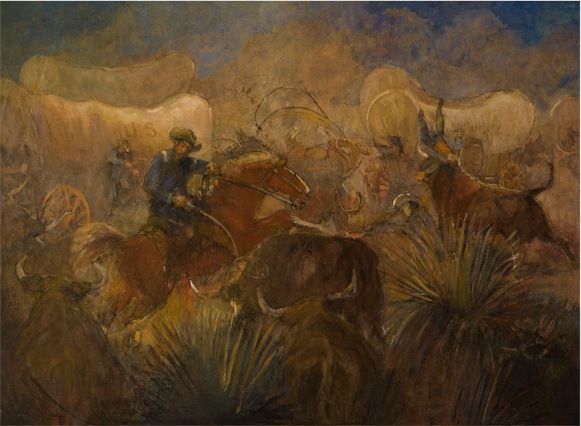 “Battle of the Bulls” by one of Alice Merrill Horne’s favorite artists, Minerva Teichert. Minerva Kohlepp Teichert, American, Battle of the Bulls, ca. 1946, oil on canvas. From the Permanent Collection of the Utah Museum of Fine Arts, Purchased with Funds from Jack and Mary Lois Wheatley and a Gift from Bernard Simbari, M.D.

Women entrepreneurs were lauded in the Salt Lake Tribune during Women’s Business Week in March of 1935. The paper reported on a national report that read, “These women owners of their own businesses may occasionally be discouraged, but they are never bored. They have found a satisfying medium of self-expression. They felt they are making a contribution to the human scheme of things that cannot be measured in dollars and cents.” Local Utah businesswoman Lulu Clegg echoed these sentiments by declaring, “One class of working women is not discriminated against and their field is not overcrowded, even in a period of unemployment. That group of women is made up of those who own and manage their own businesses.” Clegg was at that time the president of the Utah State Federation of Business and Professional Women’s Clubs, and in the decade to come she would be part of a group of women entrepreneurs and business owners in Utah’s art scene.

As professional women in the arts, Utah gallerists, dealers, and curators were instrumental in creating an art culture in the state in the early twentieth century. They were able to do this, in part, because their work was nonthreatening and fulfilled the civilizing mandate required of working women at the time. Though Utah Gov. Henry Blood and Salt Lake City Mayor Louis Marcus welcomed the professional women’s organizations to Women’s Business Week, their praise and pride was limited by cultural constraints. Mayor Marcus lauded the women for “promoting and advancing community projects of educational and welfare nature, looking toward the establishment of a better civilization.” Their professionality was acceptable as long as it improved culture and was civilizing. 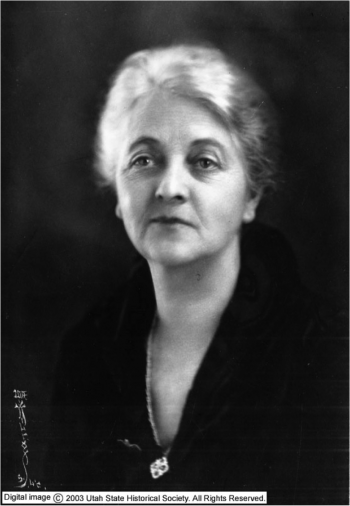 The most well-known of the Utah curators and gallerists was the mother of Utah art herself, Alice Merrill Horne, who was a productive and efficient dealer. She represented some of Utah’s best-known artists, including Lee Greene Richards, Mahonri Young, Minerva Teichert, and J.T. Harwood. She also championed Utah art in general by constantly giving public lectures on the legacy of Utah art and advocating for artists throughout the state — she placed Utah art collections in over 30 Utah schools. In additions, she curated shows in several different locations, including Deseret Gymnasium, Newhouse Hotel and Beesley Salon. She was best-known for curating art exhibitions at ZCMI, hanging works on the walls surrounding dining areas in the “Tea Room,” “Tiffin Room” and “Candy Booth,” and sometimes in the north windows. She exhibited works by Utah artists past and present that she deemed beautiful, because, for Horne, good art was beautiful art. The quote listed atop Horne’s letterhead and on the backs of exhibition catalogs summed up her ethos as a gallerist and dealer: “Foster the climbing artists for presently they will be the old masters.”

Horne’s influence was felt in the next generation of Utah women gallerists and dealers, most acutely with her protégé Genevieve Lawrence. In the 1940s, Horne began mentoring Lawrence, writing her letters of encouragement and support as Lawrence ran two gallery spaces: Provo’s Lugen Gallery, which she ran with her sister, Lulu Clegg, and the gallery room of Ray Nilson’s Furniture in Salt Lake City. Like the spaces at ZCMI, these were not contemporary galleries, but storefronts that combined home décor and fine art. Utah artist Florence Ware was the decorator for Lugen gallery and the newspaper documented her choices: “The new gallery has walls of gray and sage green as a background. The art shop [the sister’s business next door] is done in peach and turquoise with a special arrangement of display shelves.“ In a photograph of their opening, Clegg and Lawrence stand next to a faux fireplace mantle with lamps, a vase, and other decorative elements. The paintings find their home among these other decorative arts. 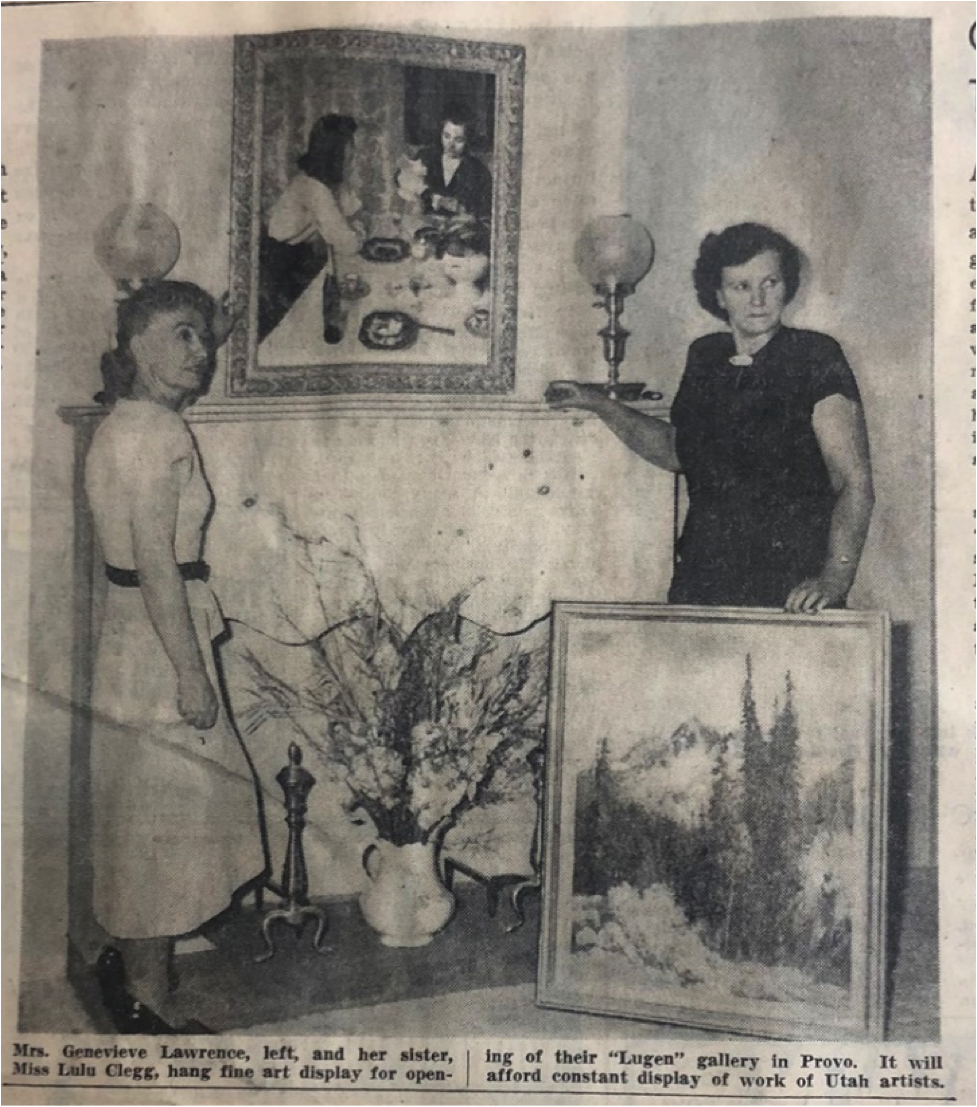 Like Horne, Lawrence worked tirelessly to promote the visual arts in Utah. Through her relationship with Antoinette Kraushaar — of Kraushaar Galleries in New York City, best-known for representing “the Eight,” an important group of American painters who started the ashcan school of gritty realism — Lawrence brought nationally renowned art to Utah to sell in her galleries alongside the Utah crowd. The relationship was reciprocal, and alongside Sloan, Glackens, and Luks, Kraushaar showed some Utah artists, including Dean Fausett and Mahonri Young. Kraushaar and Lawrence would trade paintings, advice, and ledgers back and forth. Their correspondence demonstrates the attention to detail these businesswomen paid to their enterprises. Theirs was no hobby. They were keeping detailed books and notes, and haggled one another for commissions, frames, and artworks. 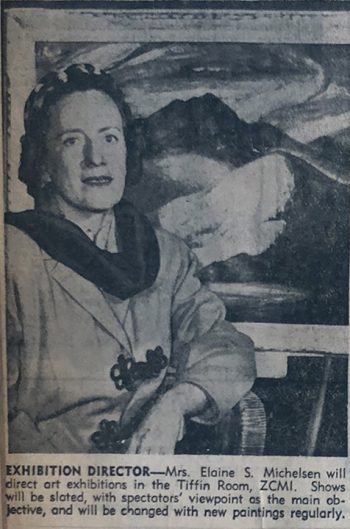 Horne’s decision to mentor other gallerists was important because her death in 1948 created a huge hole in the Utah art community. Chosen to replace her as curator of the ZCMI Tiffin room was Elaine Michelsen. She proved to be an innovative gallerist, and expanded the boundaries of Utah art by including pieces Horne would have left out. Reporting on her new curation at the gallery, The Deseret News stated, “The variety offered, probably the greatest the Tiffin Room has displayed for years, represented everything from the abstract and impressionistic to the conventional still life of flowers before a lovely drape. It aroused a great deal of comment and introduces a new trend into the Tiffin room exhibitions.” Taking over for such a monumental figure must have been intimidating for Michelsen, but she pulled no punches and began her curatorial endeavors confidently, making bold choices that put new works by more modern artists like Mabel Frazer, Gertrude Teusch, and Arnold Mesches on display at ZCMI.

Other women curators and administrators made a splash at this time in the Utah art scene. In the 1930s, Judy Farnsworth Lund connected Utah artists to Federal Art Projects as the state director of the WPA art program. Over 100 Utah artists were paid for their work through this program. As art supervisor for Salt Lake City Schools, Maud Hardman curated art shows all over the city, featuring the work of both student and professional artists. She also coordinated exhibitions for the Utah Art Institute and Utah State Fair. In 1931, Alta Rawlins Jensen founded the Art Barn, an important Utah art institution that evolved first into the Salt Lake Art Center and then the Utah Museum of Contemporary Art, while its original Finch Lane building still hosts exhibitions coordinated by the Salt Lake City Arts Council. In 1946, Jensen wrote that the Art Barn was “Utah’s Louvre.” As an exhibition space, it featured work by local artists and groups including the Associated Utah Artists, Junior League, and Salt Lake City Camera Club, but also brought in artwork and shows from across the country. It also fostered the professional work of Utah women. Leigh Block Turner, Rosa Lee Lloyd, and Gertrude Teusch ran programs and exhibits at the Art Barn in the 1940s. Outside of Salt Lake City, as secretary of the Springville Art Association, Mae B. Huntington was credited by The Springville Herald as “the woman who helped put Springville on the map.” She helped curate and coordinate Springville’s annual art exhibits. Listing her accomplishments in 1948, the Herald reported, “People who come from states all over the nation to view the art, know Mrs. Huntington either personally or her name through the literature she writes concerning the art. Probably no other individual in the community is as familiar with artist and their works as is Mrs. Huntington.” 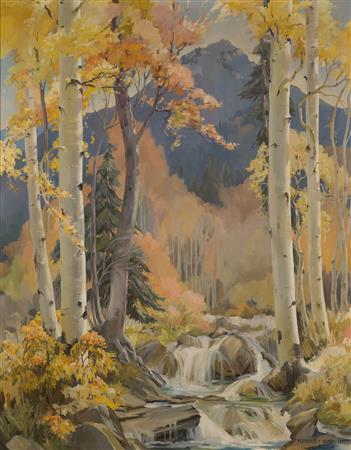 Florence Ellen Ware, American, “Landscape with Blue Mountain and Stream,” 1957, oil painting. From the Permanent Collection of the Utah Museum of Fine Arts, Gift of the College of Social and Behavioral Sciences.

The influence of these professional women was felt not only in the shows they curated and the business decisions they made, but in the ways they actively promoted, supported, and furthered the careers of their artists. In a talk given in 1938, Horne proclaimed “an artist, to be great, must have trials, and must above all, have the support, love, and confidence of some one person or group.” For many Utah artists these gallerists became those persons. Artists including Minerva Teichert, Lee Greene Richards, Florence Ware, Verla Birrell, Dean Fausett, and Rose Howard Salisbury were championed by Utah gallerists and featured frequently in their exhibitions. Ware was a favorite of both Genevieve Lawrence and Alice Merrill Horne and was the headliner of several one-woman shows at both women’s galleries. Throughout the 1930s, ‘40s, and ‘50s, the confidence, promotion, and support of these gallerists, curators, and administrators, helped further the careers of many Utah artists.

Their work gave Utah artists the chance to share their work with a broader public and, perhaps more importantly, to make a living. Summing up this important work in 1934, Horne stated, “It has been a sweet work to do something for Utah artists. Only one thing is bigger than pictures; that is the artists who make them. They cannot paint if they cannot eat.” 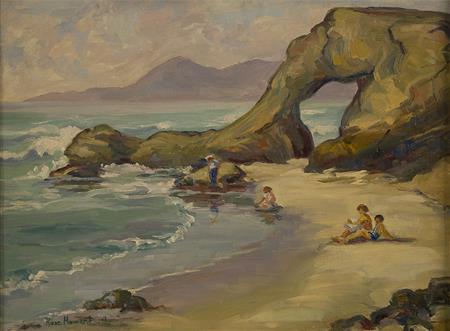