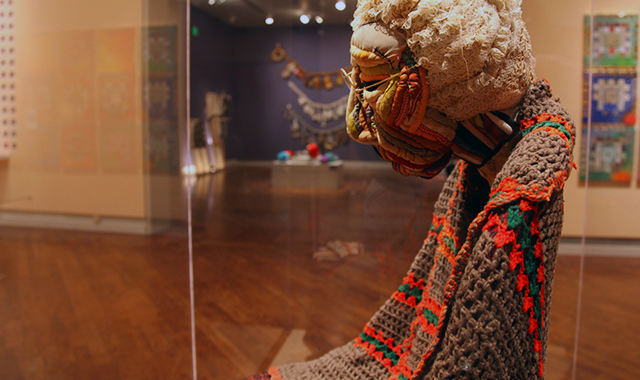 In 1975, British feminist artist Mary Kelly, along with Margaret Harrison and Kay Hunt, completed a comprehensive conceptual art project called Women and Work: A Document on the Division of Labour in Industry.  Part sociological study, part conceptual art, the book and documentation indexed the lives and daily schedules of the nearly 150 female employees at a metal box factory in Bermondsey.

Like so many of Kelly’s futures practices, what Women and Work reveals through near obsessive note taking are the everyday duties and monotonous tasks that make up the lived experiences of women’s lives: clocking in, clocking out, cooking, cleaning, getting up, going to bed.  Such documentation, as a collective picture, not only communicates basic sociological information about gendered labor division found in the 1970s England or what Mierle Laderman Ukeles calls “the back half of life,” but also reflects the way these daily tasks amount to what becomes much of our living, of ourselves.

For Kelly, a feminist artist, the work to do was not just an artistic gesture, but also a political one, to make evident the daily labor of the British working class woman and through that visibility, to validate and to evaluate the lived experience of that community.  And to enact real social change in the landscape of sexual politics, or at the very least, to comment on it. 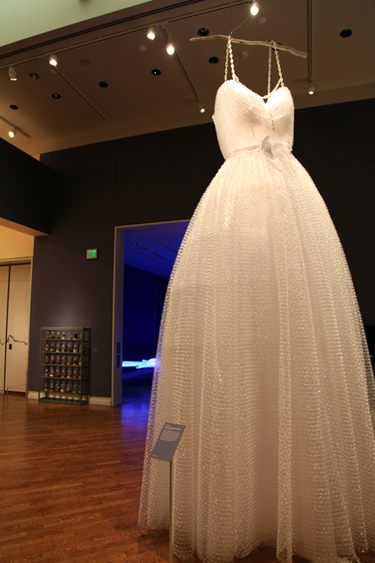 Similarly, women and work is the topic of BYUMOA’s newest exhibition.  Titled Work to Do: Trent Alvey, Pam Bowman, Jann Haworth and Amy Jorgensen, the exhibition provides a venue to four prominent female artists working in Utah today.  Curator Jeff Lambson says the exhibit ”explores narratives such as domesticity, environment, cinema, motherhood, ritual, and body. Investigating questions and issues linked to the notions of ‘women’s work,’ the exhibition examines the unique ways each artist navigates the gender politics of the Beehive State.”

Within this frame, Work To Do can be thought of as a feminist show, and specifically a regional one; and perhaps one of the first to be hung at BYU, and hung with bravado, boldly filling the main gallery. Such an examination certainly has social currency. From the Boston Globe to the bloggersphere, to protest movements on Facebook, feminism is in the air in Utah.

Yet, the religious and cultural idiosyncrasies of those debates and the specific identities they address are set aside in exchange for a broader lens regarding the variety of lived experiences that make up the diverse cultural landscape of the collective artists. For each artist is quite different from the others. Not only in their diverse artistic practices but also the topics in which they engage and as such, the show conjures a sense of multiplicity rather than a false construction of a shared unity.

To be clear, I think it would be a misstep to narrowly label this specifically a feminist show. In part, because feminist art can often slide into didacticism, championing activism over aesthetics (and this show does not).  Additionally, each artist understands and perceives what exactly is the “work to be done” varies.  Artist Jann Haworth explains, “I don’t take the view [that] we as female artists have ‘work to do’ for feminism. If we chose that subtext , we do so out of a sense . . . of injustice. It is not our day job. What I mean is that one is not holding the job of feminist looking for topics to crusade about. It is not the central subject. Creative thought is the central drive.”

Creative she is. One of the leading figures of the British Pop Art movement, Haworth is by far the most successful of the four artists on exhibit. Former UMFA curator Jill Dawsey described her as “the most important artist living in Utah today” — strong words, not parsed along gendered lines. Her beautiful and strange sculptures, like “Charm Bracelet” and “Old Lady” disfigures the confines of the flat rectangular canvas.  Rather, Haworth sews it, stuffs it and molds it into soft sculptural canvas forms whose shapes often expose gendered tropes or poke fun at the art historical canon.  Such gestures flatten hierarchical boundaries of high and low subject matter and materials, with all of the strength of Pop art’s trademark tongue in cheek irony.

In the neighboring gallery, one encounters 1,000 partially eaten pink marshmallows lined up neatly on a shelf that wraps across three walls. Some are half-eaten, others nearly consumed, and some bear only bite-marks. Above this sugary sweet wasteland, are 1,000 pigment prints of Amy Jorgensen in the process of eating, hesitating, considering.  They read as mug shots documenting the various expressions and emotions of having eaten when one should have abstained.
The work references the well-known Stanford University study called “Marshmallow Test,” which measured delayed gratification in children as an indicator for more successful lives.  But on a deeper level, Jorgensen’s work grapples with ideas of food guilt and body image, an issue especially gendered.  It is well documented that our American culture has a near clinical obsession with being thin and yet, our society chronically overeats, indulges, refusing to delay, to wait. As such, junk food is often (and absurdly) equated with sin.

One need only drive down I-15 to see that this is especially the case in Utah. As Lambson explains, “Utah is often called one of the happiest (often an indicator of success) in the nation,” he said, “but we live in a state that has some of the highest rates in the nation of plastic surgery, suicide, depression, stress, and prescription drug abuse.” Utah then, is wrapped in paradox and Jorgensen’s piece painfully reveals these tensions and pressures for perfection that exist, here, and elsewhere.

Then there’s Trent Alvey’s “The Very Large Bride’s Dress,” made almost entirely of bubble wrap, outfitted with plastic chains for the straps and train.  On one hand, it is a massive and ironic tribute to Bridezilla, focused on the ephemeral, the superficial, the fleeting.  Yet, one can also see it as a shielding material designed for the protection of something fragile, something sacred. And there’s always the idea of marriage as the old ball and chain.

For Terry Tempest Williams, who wrote about the exhibition for its catalog, it is a sign of the end of the world, where our environments are covered in waste, in materials that won’t decompose, that wrap us and warp us away from the organic. So Alvey makes messy work, in the sense that the meaning is not fixed, in the sense that it causes a disruption.  For it is not simply about dressmaking (although that is there too) but about the various ways we project meaning onto others and onto ourselves.

Finally, at the entrance of the exhibition, is Pam Bowman’s breathtaking sculpture “Becoming.”  At first sight, the viewer is met with a free-standing wall from which a series of straggly strings hang, seemingly haphazard and insignificant, almost like an Eva Hesse sculpture. Yet, walk to the side and to the back, and what emerges is tons of beautiful taut rope pulled in a dramatic diagonal, all leading to a massive and magnificent basket weaved spool of nautical rope.
Collectively each small strand builds the nest, builds the (art) work. For Bowman, the piece reflects the chaos and messiness of everyday domestic experience that when pulled together collectively builds something meaningful.  It is a celebration of domesticity and an homage to the heritage of the so-called feminine arts like basket weaving, embroidery, sewing.  Work that can be picked up, stopped, squeezed in. In fact, for Bowman the exhibition’s title is somewhat of a mission statement and a rigorous and serious reclamation of the marginalized and dismissed domestic life of so many women.

In this regard, she differs from Haworth, Jorgensen, and Alvey. And it should be clear that these four women do not constitute a homogenous perspective. They each come from different backgrounds, are involved in different life experiences. Their work is different, distinct, all its own.  Yet, when seen as a collective, certain themes emerge. One is a emphasis on softness: marshmallows, bubble wrap, fabric, rope. The other perhaps more closely echoes Kelly’s Women and Work: that is, a desire to document and to make a record of one’s self, one’s work. 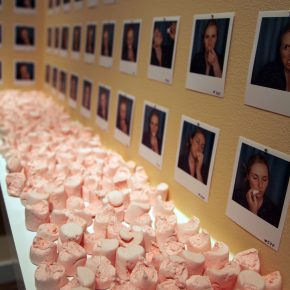 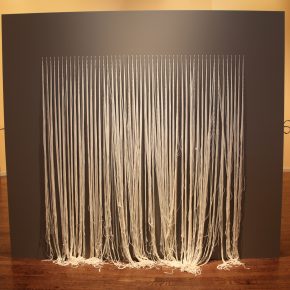 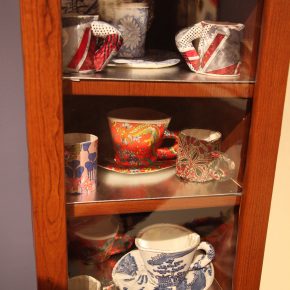 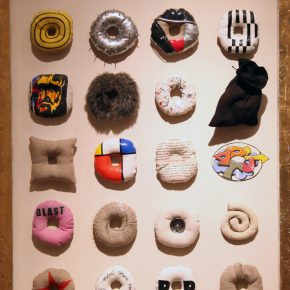 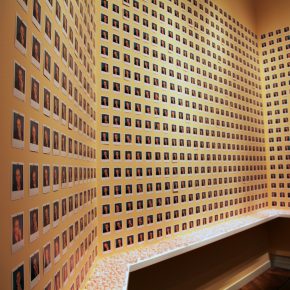 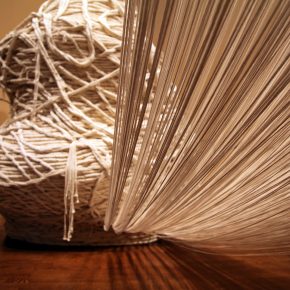 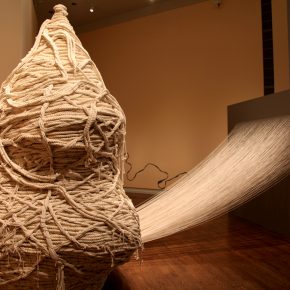 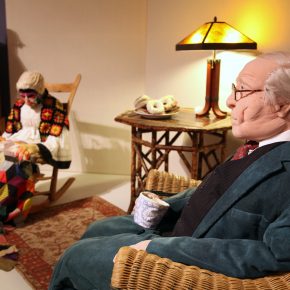 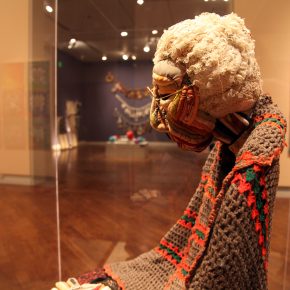 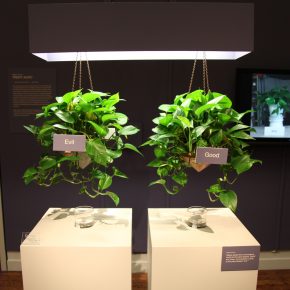 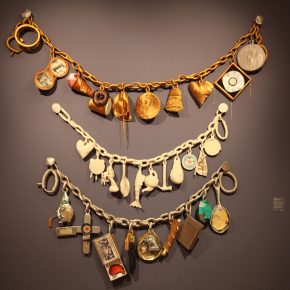 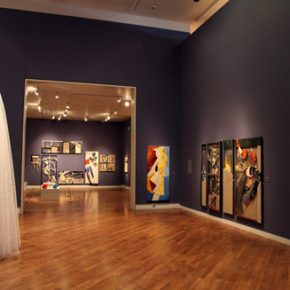 Work to Do: Trent Alvey, Pam Bowman, Jann Haworth and Amy Jorgensen is at the Brigham Young University Museum of Art through September 28.