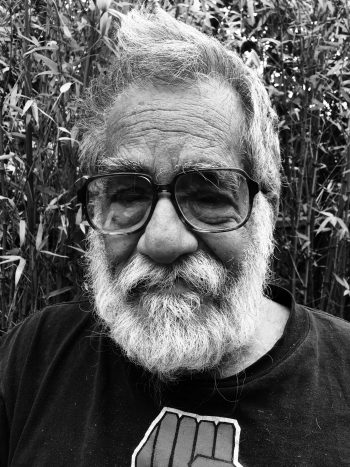 Neeli Cherkovski was raised in a bohemian Los Angeles family where his father ran a bookstore. At age 16 he created the literary journal, Black Cat Review. From 1969-71 he and lifelong friend Charles Bukowski created and edited the literary magazine Laugh Literary and Man the Humping Guns. Throughout Cherkovski’s career he has been a prolific poet and literary chronicler. He moved to San Francisco in 1974 where he has been a fixture in the North Beach, PostBeat, literary scene. His most recent collection of poems, Elegy For My Beat Generation, pays homage to his aging and passed-on friends, with poems dedicated to Gregory Corso, Allen Ginsberg, Diane di Prima, Lawrence Ferlinghetti, Jack Mueller, and many others. In these poems he reminisces on the great heyday of all their lives, contemplates his own dwindling days, celebrates each moment passing by, and attempts to come to grips with ultimate ends.

Rock Canyon Poets co-founder Trish Hopkinson recently interviewed Cherkovski, who is in town this week for readings in Provo and Salt Lake City, to find out more about who he is as a poet and how he approaches writing poetry.

HOPKINSON: Who has been your biggest poetic influence?

HOPKINSON: For you, what is it to be a poet?

CHERKOVSKI: To be a poet is to fall in love with words. And to make them sing.

HOPKINSON: What scares you most about being a writer? Gives you the most pleasure?

CHERKOVSKI: I am frightened always of not communicating well and of having readers misinterpret. I don’t mind. The writing of a poem I deem successful is most rewarding. The best is reading one of my older poems and loving it, falling for it all over again.

HOPKINSON: Can you describe your writing practice or process?

CHERKOVSKI: I have no specific practice. A poem comes when it comes. I rarely write a poem without glancing at the words of another poet. They inspire me to stay on my toes. Recently, Wallace Stevens has served as a deep font of inspiration.

HOPKINSON: Do you have a favorite revision strategy?

CHERKOVSKI: I rarely revise, but when I do it’s with a light touch or the poem is abandoned.

HOPKINSON: If you had to convince someone walking by you on the street to read your book right then and there, what would you say? San Francisco poet Neeli Cherkovski will read poems from his recently released book Elegy For My Beat Generation at two events in Utah, as featured poet for the Rock Canyon Poets monthly poetry reading and open mic at 6:30 p.m. on April 10 at Pioneer Book in Provo, and for the CITYART reading series at the downtown Salt Lake City Library on April 11at 7:00 p.m. The readings are open to the public. No tickets are required.