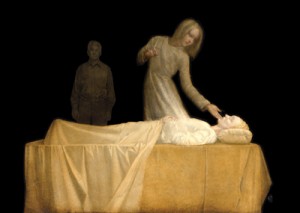 The exhibition is titled simply “Woodbury Invitational.” A more provocative title, however, might aptly read “Metaphysical Visions: Five Artists’ Journeys into the Sublime.” The exhibit is a display of five internationally famed artists of the highest caliber — their disparate styles woven together by their common interest in metaphysical imagery and the thematic exploration of what it means to be human. The artists’ visions convey a range of the sublime: intense logos, sensitive pathos and emotive ethos. Each artist’s exhibit is a transcendental vehicle engaging the imagination, the heart and the spirit, allowing every visitor to leave the gallery with their own personal experience.

Transcendence is difficult in the face of atrocities like the Holocaust. Many artists who choose to examine such topics use pejorative, condemning, confrontational imagery to elucidate these highly emotive and lamented historical chapters in history. Harvey Breverman, on the other hand, addresses the Holocaust — as well as other Jewish subject matter — by allowing the viewer to contemplate this heritage using incredibly complex imagery and iconography. The primary focus of each of his canvases is a portrait occupying the lower portion while above each sitter’s head their subjective universe is seemingly transfigured. At times Breverman’s references are recognizable — a crumpled striped shirt of a concentration camp victim or Hebrew text — but most are overwhelmingly cryptic. These are intense and one feels humbled as if in the presence of a prophet. Breverman’s realms all seem to lead through psychic labyrinths to the infinite, to an eternity that we cannot grasp. These are presences representational of thousands of years of suffering and the viewer is awed and feels, as I did, as if walking on holy ground. 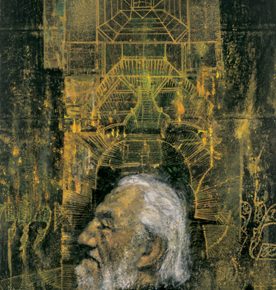 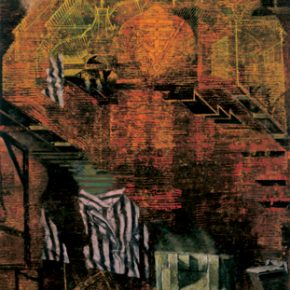 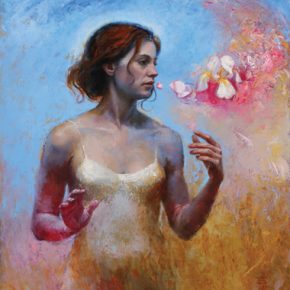 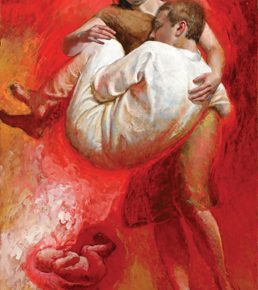 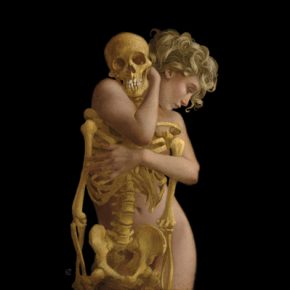 With more ethos and less logos are the highly poignant and ethereal works of Marcus Alan Vincent. Vincent’s subjects of women in serene, spiritual, intimate, candid moments are surprisingly sensitively painted by this man. His works address different states of being: suffering, euphoria, love. Each painting seems to amplify these states as if one were looking through a lens allowing the senses to intensify and radiate. Even the very wide color palette Vincent uses is vibrant and broad. “Girl Speaking Flowers” is as lovely as the name suggests and reveals a point in the cycle of the power of womanhood. In “Embrace,” one sees beauty in suffering as in a veritable contemporary pieta. A woman holds a young man in her arms as they coexist in an abstracted space with no other figuration than a small fetus nestled in this almost tangible atmosphere. The effect is to create an intense intimacy, as if this fetus were still in the womb. Conclusions about the relationships may be drawn by the viewer.

The Invitational has a strong showing of paintings by local artist James C. Christensen, a marvelous artist best known for his whimsical fantasy-inspired pieces. Thankfully, the Woodbury has chosen to present the intensely insightful side of Christensen’s more spiritual work. These highly charged subjects dealing with spiritual aspects are equally imaginative as his “storybook” genre, yet use his imagination to more sublime ends, evoking real feeling. These are uncanny, authentic glimpses of the sacred; their truth is not questioned. In “Sweet Parting,” one has a sense of reverence seeing a woman laid to rest on a slab. Another woman, possibly an angel, hovers next to her while a hazy figure of a man stands close behind, possibly her father waiting for reunification. 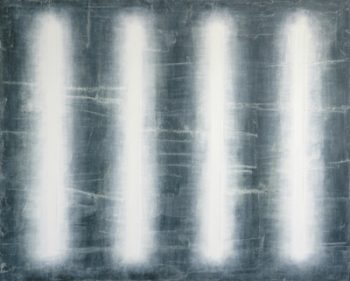 “Music of Stone” by Robert Stuart

ne of the strongest and most sublime showings in the Invitational displays the work of Robert Stuart — the most abstract and simultaneously ethereal paintings on exhibit. This series uses strong repeated vertical or horizontal bands but is a far cry from sterile Barnett Newman or Kenneth Noland stripes of High Modernism. When viewing “Music of Stone,” the density and coldness of the panel is palpable, while the white bands seem alive with music that is almost audible. These are no Modernist experiments, art for art’s sake, but avatars of light for our sake. While the motifs used are consistent, each painting has an individual sublime quality that speaks with a unique voice: incarnations of mood, thought, and vision. While slightly shifting tones and textures, Stuart creates new beings. “Winter Leaf,” 2008 manifests a chill, very real to the imagination.

A more cerebral showing can be seen in the sculptural works of Von Allen. These medium-size semi-abstract forms are raised on plinths and are part human, part alien and fully surreal. This is life mingled with the intensely chimerical. In “Nest,” 2008 the alien aspect is an amorphous bulbous shape, organ-like yet very non-human. The human element is the nestled organ, a very accurately rendered human heart cradled in this abstracted shape. It is an uncomfortable pair yet powerful art is not always comfortable. Two sculptures that seem to interrupt the cycle of organ-like hybrids are minimally rendered busts. They connote a sense of softness and sensuousness and in their ambiguity allow the viewer a free play of imagination as the mind assigns qualities and identities to these inviting black female faces, locked in stone. Like the rest of the series, they are uncanny in their foreign yet familiar presence. 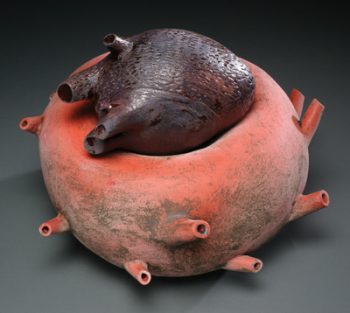 Allen’s works, human or non, literal or amorphous, like the overwhelming majority of showings at the Woodbury, leave much of the aesthetic manifestation of each piece to the viewer. We are encouraged by these highly stimulating bodies of work to ponder, to feel, to imagine, to wonder. This is not difficult as the art on display is very accessible and resonates deeper elements of humanity that most visitors to the Woodbury will be engaged by. These multi-dimensional offerings at the Invitational are potent, brimmed with poignancy and sensitivity and one need not know anything about art to enjoy the show. To access the fuller potential of the exhibition, one must merely have the motivation to appreciate it and look beyond the limits of the physicality of the canvas. Using more than just the eye, the viewer may penetrate the vastness of meaning in these works and leave the show enriched by a personally profound experience.