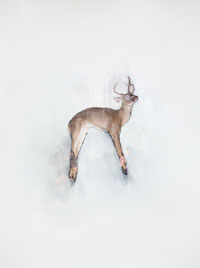 The Utah Division of Arts and Museums (what you might know better as the Utah Arts Council) has announced its 2009 Visual Arts Fellows. Colby Brewer of Salt Lake City and Josh Winegar of Ogden have each received a $10,000 award and a place in the 2008/2009 Visual Art Fellows Exhibition opening in March of 2009.

Brewer and Winegar were selected from a pool of 65 applicants by independent juror Kristen Hileman, a curator at the Smithsonian Institution’s Hirshhorn Museum and Sculpture Garden , in Washington , DC . Hileman commented, “I selected Colby Brewer for his approach to art making that has gained tremendous ground over the last decade; the involvement of audiences in the act of creating. …John Winegar’s work is both intimate and replete with complex layers of visual information. The artist uses painting and drawing to alter found photographs, obscuring some aspects of the photographic image, while highlighting others.”

Colby Brewer lives and works in Salt Lake City and Budapest , Hungary . He received degrees in sculpture from Brigham Young University in 2004, and Pratt Institute in Brooklyn , New York in 2007. His work has been exhibited in both solo and group exhibitions in Budapest , New York , and Utah . Brewer’s most recent exhibition was the collaborative/participatory installation & ME! at the Utah Museum of Fine Art.

“There are so many great artists in Utah , I’m really honored to have been chosen for this fellowship. I look forward to collaborating with the other fellowship recipients at the Rio Gallery next March,” said Brewer.

Utah native Josh Winegar received a BFA in photography from Weber State University in 2002, and shortly after, an MFA from Columbia College in Chicago , Illinois . Winegar has exhibited extensively across the United States and received several awards for his work. He recently returned to Utah to assume a one-year faculty replacement position at Weber State University where he is currently an Assistant Professor of Photography. Winegar currently lives in Ogden with his partner Peggy and their two children.

“It is truly an amazing honor to be awarded the Utah Arts Council Fellowship. The recognition and exposure granted from this is genuinely appreciated. Of course the money awarded is also extremely appreciated and will allow me to pursue my research and artistic endeavors in ways not previously possible. Thank you so much,” said Winegar.

“The Division of Arts and Museums’ Visual Arts Fellowship program provides the opportunity to highlight Utah ’s best and brightest artists. It is particularly heartening to award the fellowship stipends during these tough financial times. I hope these checks provide a little financial stability and creative maneuverability so that these two fine artists can take their careers to the next level,” said Margaret Hunt, Director of the Utah Division of Arts and Museums.

Since 1986, the Utah Division of Arts and Museums has awarded two fellowships each year to Utah visual artists with the intention of honoring and promoting excellence while also encouraging artists to also seek new levels of accomplishment and expression.