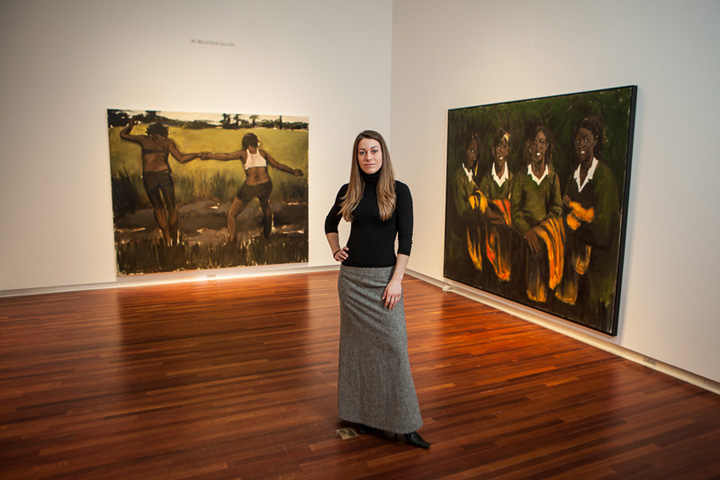 Whitney Tassie, the new Curator of Modern and Contemporary Art at UMFA stands among salt 7, an exhibition of paintings by Lynette Yiadom-Boakye. Painting to her right: Lynette Yiadom-Boakye. A Toast to the Health Of, 2011, oil on canvas, 78 7/8 x 98 1/2 inches. Collection of Noel Kirnon. Courtesy of the artist, Corvi-Mora, London, and Jack Shainman Gallery, New York. Photo by Simon Blundell.

At the artist conversation for the recently-opened salt 7 show at the Utah Museum of Fine Art, Whitney Tassie seems relaxed and at home. Tassie is the new Curator of Modern and Contemporary Art at the UMFA, and the exhibition she’s designed for her inaugural offering to Utah is a body of work that provides numerous complex angles to consider. Tassie fields questions about the multiple facets of the work with a casual deftness that attests to the hours of scholarship that have gone into examining the work, as well as an easiness born of years immersed in the complicated landscape of contemporary art. Tassie has only been at the UMFA since last August but already she is fully engaged with Utah and is bringing in first-rate national programming—as evidenced in this newest installment of the museum’s ongoing exhibits about contemporary art.

salt 7 features an exhibition of paintings by Lynette Yiadom-Boakye, a British artist of Ghanaian descent. Most of the subjects in Yiadom-Boakye’s paintings are black, and the works examine racial themes. “She is someone I’ve been following for a couple of years,” Tassie says of her first salt artist. When she saw that the salt program had never featured a painter, Tassie leapt at the opportunity to exhibit Yiadom-Boakye’s work.

Tassie came to the UMFA last year after being selected from an international pool of candidates. She says the decision to come to Utah was not hard. “A lot of it had to do with the university. I had been at a university museum prior to going into the commercial world, and I love university museums. We have all these resources here, and can do nerdy academic shows, as opposed to the giant blockbusters that a lot of other museums have to do.” As an undergraduate, Tassie had worked at the Johnson Museum of Art at Cornell University in Ithaca, New York. After earning her bachelors in art history and archeology, she stayed at the museum for an additional year, contributing to education, collections, exhibitions, and curatorial work. From there Tassie went on to earn a master’s degree in modern art history, theory and criticism from the School of the Art Institute of Chicago. In Chicago, she started working at Monique Meloche Gallery, where she advanced to gallery director and where she would stay for seven years. She says it was the pleasure she drew from working directly with artists that propelled her into the contemporary art world. “I wanted to work with living artists and be an advocate for them.” With her new position at the UMFA she can do just that, and still bask in the university environment. “It’s the greatest thing to work with students and to have that audience and mission.”

The museum has many different audiences, but Tassie identifies three groups that she’s particularly focused on. The local university community is a very high priority, but she also stresses that the international contemporary art world is an important audience. “I have an international audience and colleagues that I keep in mind and that I need to stay on par with,” she says. In addition, she’s thinking about people from the wider community who are just curious and engaged.

How much of Utah’s unique terroir influences the selection of a show and how much is Tassie taking into consideration the international conversation happening in contemporary art?

“There is something very unique about this place,” Whitney says of Utah. “It’s apparent right when you step off the plane. I think the UMFA is very invested in that pride of location. And we will continue to be invested in Smithson, and land art, and artists that are inspired by this place, and artists who live and work in this place, but I think it’s also extremely important to bring in the international conversation that the art world is having right now and to inform artists of each other.” She says the museum functions like a portal. A unique function of its salt program is to “bring people in from the outside world and introduce them to Utah.” And when they leave, she hopes they become emissaries, in a way, for what we’re doing here.

The salt program has featured one local artist, but the series is really focused on internationally emerging artists, Tassie explains. She’s very glad that just across town, the UMOCA has a locals-only gallery: it frees her up to work with the international community, and if she’s working with a local artist in salt, it’s because they’re emerging onto the international scene.

It’s evident Whitney Tassie is treating Utah with a deep amount of respect. She’s not filtering the conversation through any assumptions about Utah; she’s purely offering her constituents a chance to engage in the international conversation. salt 7: Lynette Yiadom-Boakye is about race, and we’re having that conversation because it’s a conversation that the art world is having. And because the art is simply great.

At her February 21st artist conversation, Lynette Yiadom-Boakye said she’s “always painted black figures. Basically,” she says, “it would be strange for me not to. I don’t see them as one color or another. First of all, because they’re not real people.” Her subjects are re-imagined composites of people, often taken from life, but also reminiscent of images from advertising and current media, historic photographs, as well as African portraits.

“In this sense,” Tassie writes in her exhibition essay, “her depiction of black figures is a representation of normalcy rather than defiance or celebration. However, when considering the history of portrait painting and black representation, which Yiadom-Boakye’s work clearly references, her ordinary subject matter assumes an additional, subversive role. ‘This is a political gesture for me,’ Yiadom-Boakye says. ‘We’re used to looking at portraits of white people in painting.’”

The political nature of the paintings works in a subtle, very quiet way. Yiadom-Boakye prefers to keep her subjects vague, timeless, placeless, often ambiguous in gender or age. They exist outside of time, which, as Tassie points out in the exhibition essay, “opens up the psychological side of her characters and [she] is able to suggest non-representable states like vulnerability, superficiality, or contempt.” Often one doesn’t even consider the political aspects of the piece until one looks at its title. For example, one of the paintings in the show, the portrait on the front of the exhibition booklet, is a nice picture of a woman that looks almost like it could be hanging in the office of a university president — perhaps she was a former dean, or a major donor to the university. That is what one might be thinking, anyway, until one looks at the title: “Further Pressure From Cannibals.”

There is a narrative element to the work that is transmitted in hints and snippets. In a recent review in Interview Magazine, Christopher Bollen wrote, “Yiadom-Boakye’s intentional withholding of details or narratives seems particularly effective in our information-obsessed age, as if the artist is asking the viewer to help complete the fiction she’s begun.” If they are fictions, they are short-shorts that create vivid worlds using few words but that deliver incredibly powerful punches. 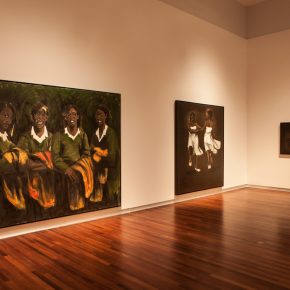 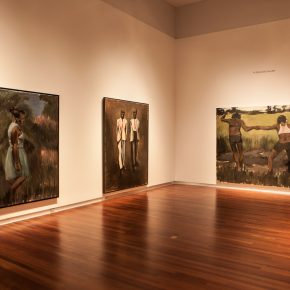 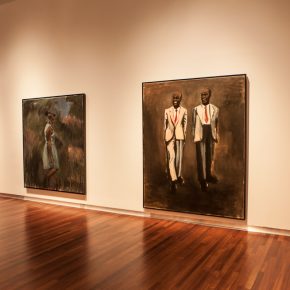 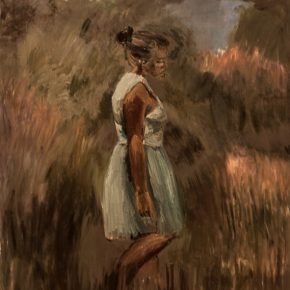 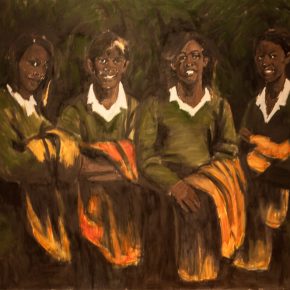 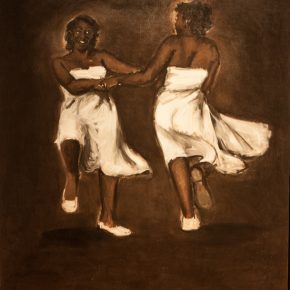 Works by Lynette Yiadom-Boakye at the UMFA

Consisting of only seven painting, the salt 7 exhibition fills just a small room of the museum. And yet walking into the exhibition space, where many of the figures are nearly life-sized, one feels a kind of intimacy and confrontation with the work. The classical feel of the paintings, some dark and Goya-esque, some reminiscent of Sargent or Manet, threatens to create a lull of familiarity. But then there are the titles to consider, and the ambiguous gestures of the subjects. In one of the exhibition’s more joyful-seeming paintings, two women appear to be twirling together. The title, “Shoot the Desperate, Hug the Needy,” tosses out any potential for comfort the viewer may experience with the image. Quickly, one needs to become comfortable feeling uncomfortable, off balance, and challenged with the exhibition. Which, it turns out, is part of the pleasure of the work. It’s an exhibition that grows larger and more interesting the more you consider it. 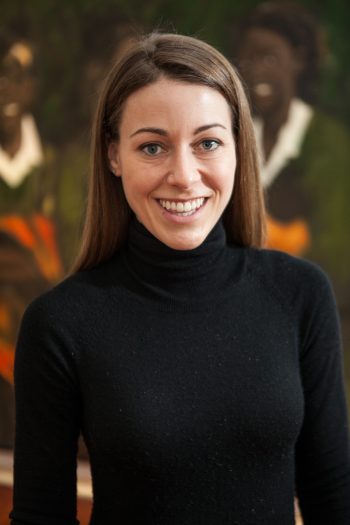 It would seem that the UMFA’s newest curator is comfortable with presenting a challenge. What can we expect from Whitney Tassie next? “I’ve been doing a lot of research on artists who are considering issues of sustainability,” Tassie says. “There are artists doing projects considering topics of our natural resources, even looking at legal issues and land rights, so I’m just starting to get into that,” she says. “Another area I’m interested in is the virtual world, and how in our lifetime the way we communicate with people or even experience ourselves has completely changed.” While she is coy about what specific projects might be on her radar, it’s fair to expect she will provide us with respectful engagement and meaningful dialogue. “The people who are asking questions and want to have intelligent conversation?” she says, “that’s my audience.”

salt 7, featuring works by Lynette Yiadom-Boakye, is at Utah Museum of Fine Artsthrough June 23rd. UMFA is located in the Marcia and John Price Museum Building on 410 Campus Center Drive. They are open Tuesday-Friday, 10am-5pm; Wednesday 10am-8pm; and Saturday-Sunday, 11am-5pm. Admission is $7 for adults, $5 for students, seniors, and youth. Admission is free for UMFA members, U of U students and faculty, and military families.