White, the Unseen Spectrum of Life 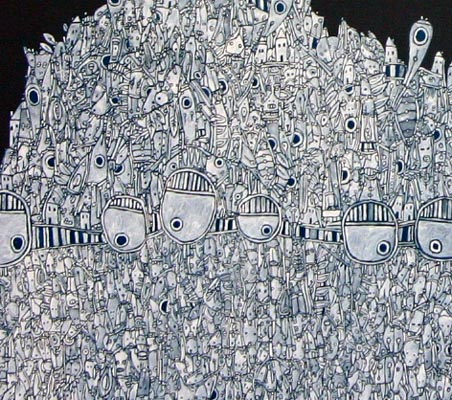 detail of None of This is Here by David Ruhlman

White. Pure, innocent, cleansing, good, virtuous, virgin, whole, positive, light, new, reviving, awakening. White is the fullness of the spectrum of color, the element we do not see in the vicissitudes of the rainbow, in the vicissitudes of life. It is all encompassing yet invisible. At this time of year, when all is rebirth, a new year, resolutions, and hope, the exhibition White at Nobrow Coffee and Tea Company reveals the spectrum of white, literally and metaphorically. In this season we take a collective look at life, at our lives — who we are and where we are going — at truth. This exhibition is a provocative, poignant, meaningful, metaphorical, and metaphysical invitation to the viewer to a contemplation of that which we see but do not. The exhibition brings to the fore that which embodies the rainbow, all that resonates from the pure form of white. White is a celebration of what is fundamental, the basis of all that is good and pure. It does question, but is refreshing in its knowing naiveté. 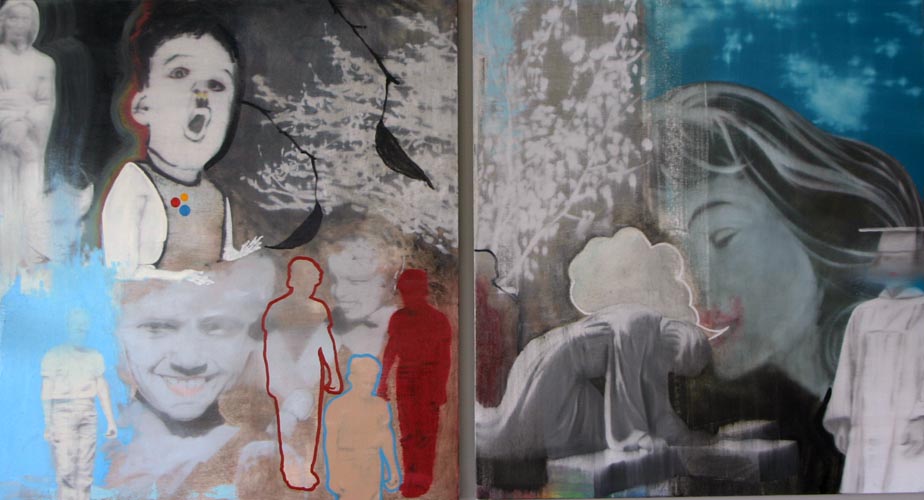 Suburbia
Brian Patterson
This piece embodies much of the spectrum of white metaphorically. A collage of children, saints, a narrative of beginnings, life and renewal, it might be likened to a Renaissance altarpiece, a devotional object to life and the phases of life. It is the only piece in the show which uses color extensively, but the majority of the iconography is painted in white, and color subjectifies metaphorically the qualities of white found in life. The iconography ranges from life to death. Young children, painted true — veritable innocence and joy, youth. We see a saint prostrated on a cross, painted hauntingly in white, a sublime reference to transience as opposed to finality. The only black in the piece is two small branches with leaves about to fall. Black is the color of emptiness, of finality, and this color is limited in the piece to this organic quality. Overall the painting is devoted to the transcendental, the spiritual. It is a fluid narrative of paint and iconography where white dominates, where the humanity it symbolizes also dominates. 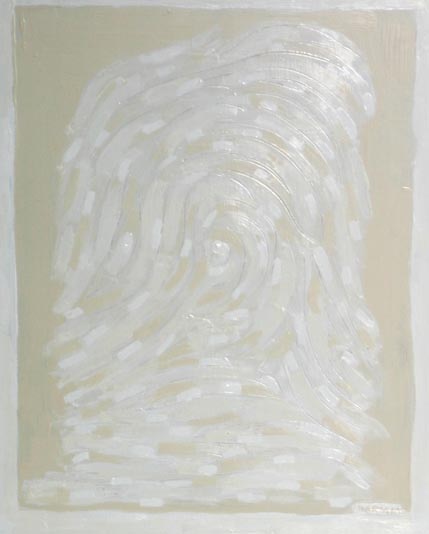 My Left Thumb by Kevin Karagas

My Left Thumb
Adam Karagas
What is a thumb print? It is a mark of identity owned by one soul; no other has its like. Like a snowflake, it is the only of its kind. What is a white thumb print? As eyes are windows to the soul, such a thumb print is the mark of identity in a state of wholeness. Karagas’s thumb print, the entirety of the canvas, is not painted lucidly but abstractly and symbolizes humanity in its purest; it is identity at its best. It is a Utopian dream, in a season of dreams, of newness, of cleansing. 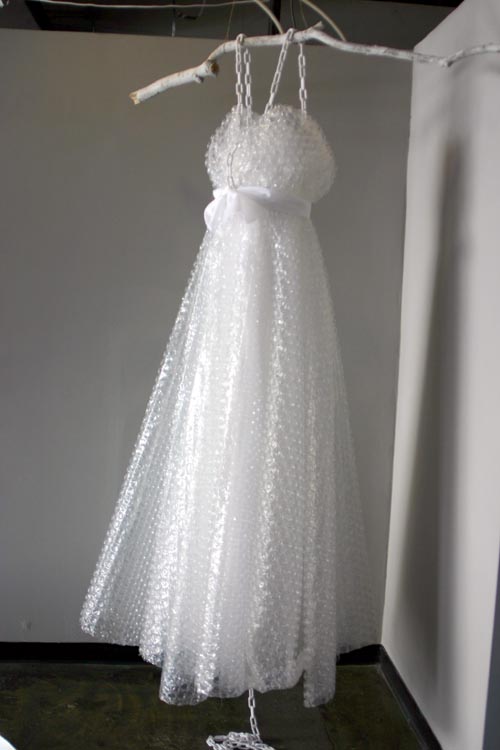 Untitled White
Trent Thursby Alvey
A white branch = a hanger; white plastic chains = shoulder straps; a white ribbon = a waist band; a seven foot long cut assemblage of bubble wrap = a wedding dress. This is a metaphor not to be decoded; a holistic meaning of virginity, in its most pure and fundamental. All elements used — branch, chain, ribbon, bubble wrap — are basic elemental tools to be used, a nascence waiting to develop into something glorious. A virtual bride is missing, but assuredly she is the embodiment of all that is good at the core, a future bride, mother, a goddess. 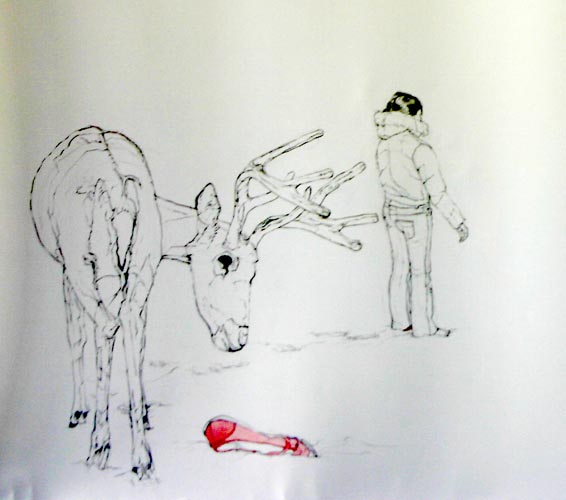 Detail of East of the Sun by Mary Toscano

East of the Sun
Mary Toscano
In Toscano’s white sheet of paper, four by eight feet, she presents a drawing simple in execution but not simple in meaning and implication. A deer in the left foreground turns sleepily and faces the viewer in a field of snow. Standing near her is a woman dressed in a snowproof parka gazing in the opposite direction. She is aware of the deer but looks elsewhere. She is a hunter but not a hunter of deer. She is a hunter of life, of adventure, of the future and of dreams. All is at one in this picture as peace emanates. The woman looks outward towards a grove of trees. The viewer can only wonder at what she sees, and wonder about what they themselves are seeing in this sublime setting. Like Casper David Freidrich’s “The Wanderer,” she is a soul searching the sublime, feeling the sublime as we see it through her. The only clue we have to her state of mind is found when we see in the foreground a pink shoe and see that one of her feet is bare. She is leaving something behind and venturing forward.

detail of None of This is Here by David Ruhlman

None of This is Here
David Ruhlman
Ruhlman’s triptych implies that everything is here. What we see is a myriad of faces painted in stylized minutia, congealed in a large form painted against a black background. The organic complexity of the faces and motifs, placed in this grandiose and claustrophobic setting are both the structure and the substance: they constitute the structure and all else is void. These motifs are mingled with dwellings — huts, shacks: the masses must have a place to sleep. But nothing here is at ease or restful. All is chaotic; the faces seem to be at odds, struggling for dominance, for air to breath in this cacophony of life, or virtual life. As Ruhlman suggests, nothing is here, only myth and arbitrary creations. 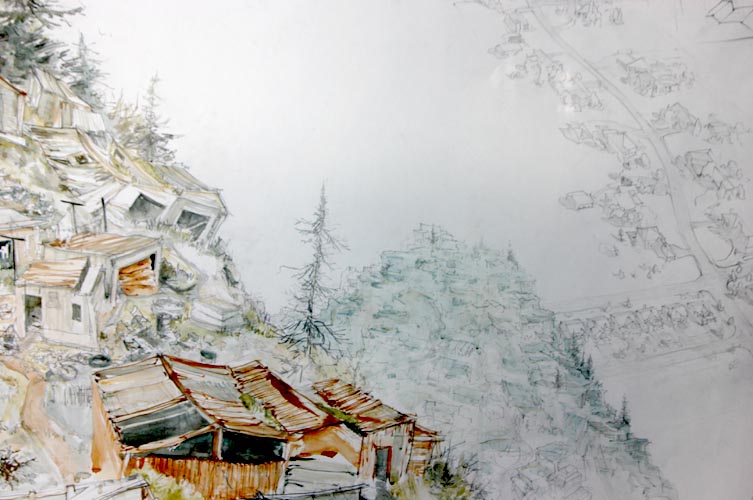 Honky Town
Steven Larson
Larson’s shanty town is a pile of rooftops, masses of cardboard dwellings. Here is a structure, all too real, hauntingly real. Throughout the shanty town one might see remnants of what was: bicycles, antennas, clotheslines, telephone wire; but there are no inhabitants, this shanty town is deserted. Farther off to the left and right background of the picture we see suburbia, or mass planned dwellings, blue prints of master planned communities. Here also there is no sign of life. Another myth? Life has fled, we see it nowhere, only the suggestion of life. Are we forgetting something? 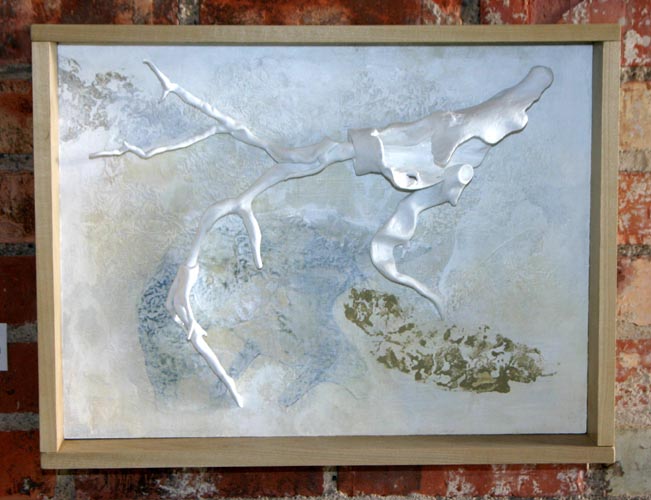 Untitled
Mike Bernard
Bernard’s small scale sculpture set in a rectangular frame brings the viewer full circle as it closes the show. This hybrid could be a skull, or a branch, or anything in between life and death. It is an organic metaphor of white. Here we refer back to the spectrum of what white is, what we do not see which encompasses all that we do see. Here in this sculpture is the rainbow of nuances of meaning that can be found in this spectrum; not in reds or blue or greens but in true white. In the ambiguity and abstract simplicity of “Untitled” the viewer is free to determine in this relic what they may. There is no clue or didactic implication here, just a declaration of offering to free interpretation of the value scale of existence. This abstraction brings the viewer back to Patterson’s “altarpiece to life” where reality in its fullness is represented and begins again. At this time of year, we leave myth behind and find truth in ourselves and each other — human relationships in the vicissitudes of life.