Where to Go to Hear and See

The librarian on the City Library’s fourth floor proffered a warning: there hadn’t been enough space to hang everything in the correct order. She referred to the thirteen poems by Lynn Kilpatrick and fifteen drawings by John Sproul that together comprise To Be Unnamed. Probably everyone has an opinion on which works of art look best next to each other, but the human ability to isolate a subject of attention makes many different arrangements possible—fortunately for those who must hang works chronologically in museums, or according to a spouse’s preference at home. In this unusual case, however, the poems belong to a cycle that determines their proper order, and each poem goes with a particular drawing, some of them quite large. To further complicate the problem, the gallery was scheduled, months ago, to be shared with another artist; it has two asymmetrical doors, and features remote display space on the outside walls as well as that within. When the three bodies of work arrived, there proved to be no entirely satisfactory way to fit everything in without rearranging the intended order. The damage is arguably minimal: many visitors will look at the drawings, scan a couple of poems, and leave unaware of the larger pattern, while those who take the time to read through all the poems will find mentally rearranging them a surprisingly rewarding challenge, not unlike solving a puzzle. 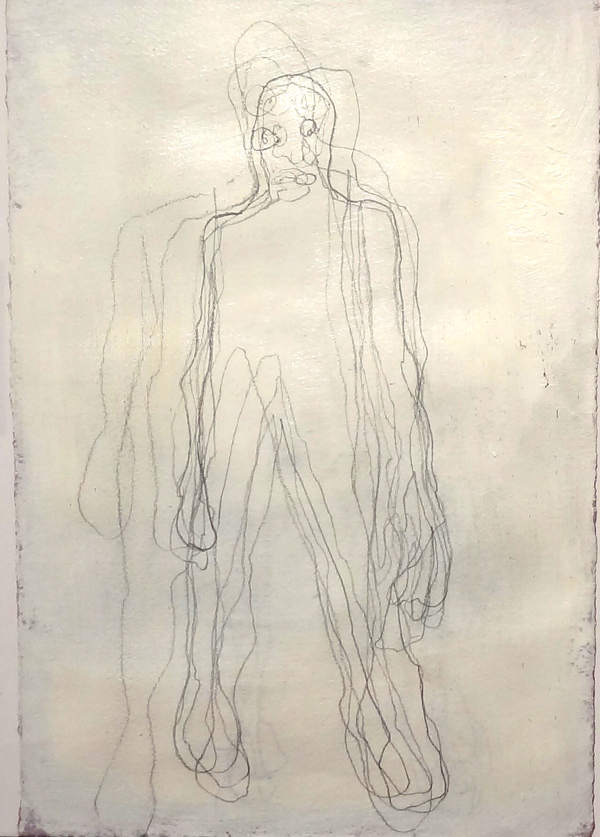 The first thing to notice about the figure in “Where Do I Go Hear” is that he has been overdrawn for a total of five silhouettes. Depending on the viewer, this may make him—the pronoun is neither arbitrary nor generic—comedic or unnerving. Either way, he’s unsettling. Eventually, he takes on a kind of ectoplasmic quality, like a candle flame struggling with a draft. The paper he’s drawn on has been brushed with something glossy, creating reflections that dance as well. He seems to be stepping forward with his left foot, and reaching out with the hand on that side . . . .

The first thing to notice about the accompanying poem is that it’s written in prose, like a paragraph, though it’s not a paragraph. It may be a dialogue, call and response, or the call that seeks response, or even a call that responds to itself:

The tongue wants what it wants. Tell me again what it wants. Words to be interchangeable. Mouths to be ears. I say, explain to me again the fine connections between the hand and the eye. Tell me how you perceive every word I think, how you see what I speak. Tell me again the word for luck. If the world is to be a realm of representation, tell me what I know a hand to be. Tell me that the apparatus by which I perceive the world is nothing more than a faulty mirror. Tell me. I want so much to hear your voice drawing the image of a man who could be more than he is. The man who could illustrate the world with one gesture. Can you hear yourself? This is the sound of one hand speaking.

Art and literature are not puzzles to be solved, though that may be the only way we know to approach them. Close reading, seeing what’s really there, makes appreciation possible. The first sentence, “the tongue wants what it wants,” repeats from the previous poem, in which the speaker argues that a representation, such as a drawing, is not the same as the thing it represents, and likens this to what happens to lovers, who see not each other, but images of each other through the distorting lens of passion. My name is not me, the voice pleads: do not speak my name. Ah, but the tongue—the passion—persists in its error. It wants words and body parts—his and hers, his and his, hers and hers—to be interchangeable. The speaker argues for fidelity to truth: tell me how you see me, but be careful you don’t deny my fundamental knowledge. “Tell me what I know a hand to be.” A lover’s deepest fear is deception, which can happen when one person does too much of the talking . . . when it’s all on the one hand—like the hand extended by the figure in the drawing—and not enough on the other hand.

This isn’t a translation. It’s just one reading, and of one poem. Yet it may offer a glimpse of the rewards, the pleasures to be had. See for yourself, and then there will be more to say.

To Be Unnamed: Blind Drawings by John Sproul and poems by Lynn Kilpatrick is at The Gallery at Library Square, on the fourth floor of the Salt Lake City Main Library, through June 14. Look for a longer conversation on the exhibition in the June 2013 edition of 15 Bytes.