What if you loved England or Japan, and you could no longer live there, it isn’t/wasn’t possible: you are marooned in America, land of tea dumped into a Boston harbor by men dressed like Indian braves. You might paint multiple crash-courses of teacups, sunlight spilling over them, symbolic of repeated cups of tea happening there — without you.

What if you were once a third-generation European acrobat, who performed in American circuses feats of terrific skill and bravery; then, after you have married an American, the circuses one by one close, and you become old. What would you paint, living near your rushing, droning freeway in Florida? Perhaps it would be the swinging rope-rung of the trapeze, twisting, turning, in somehow not-tangled masses, moving en masse with not a soul hanging from them.

If you were a Navajo today you might, from your checkerboard squares of land (much of the land inhabited by the Navajo is actually, over and over, checkerboarded: mixed with alternate squares of land not owned by Indians, to prevent the Navajo from the consolidated beauty and power of a cape-like great sweep of land) — you might now be painting, as Patrick Dean Hubbell, Navajo, is — squares filled with a galloping crush of romping, dreaming horses.

At Modern West gallery, in Equus, almost all paintings are horses (there is one of heavy-headed romping buffalo, looking weighted down by their large heads, suggestive, perhaps, of American Indian headdresses, dipping humbly, low). In “Equine Energy Wave” and “Running in the Starry Night Sky” and many others in this show, horses run in one direction, in romping surge. In most of these surges of horses — look and you find only one horse really fully drawn – others a jagged Bayeux tapestry of suggestion, as if drawn by a courtroom illustrator who must sketch fast. 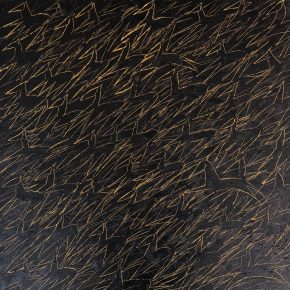 Running in the Starry Night Sky 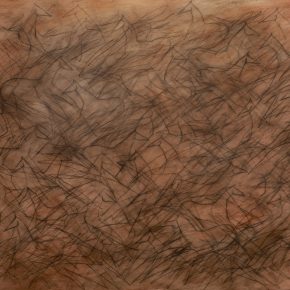 Horses in the Wind 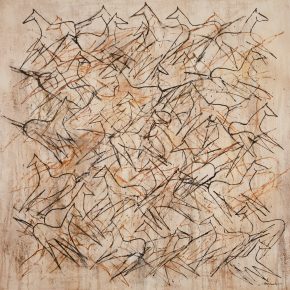 In “Horses in the Wind” and “Horses Roaming Through the Night” horses weave toward each other and away. Again, all horses are riderless. Simplistic shape of horses’ heads, in two paintings, with their jutting sharp points of horse-ears, suggest a spiked, gorgeous crown top to the painting, not unlike Jesus’ naturalistic crown of thorns. (In “Equus Movement” five rising horses’ ears providing points, a balanced royal diadem, like pronged irregular beauty of the chandelier made from tips of deer’s or elk’s antlers.)

Strikingly, as in a clearing in the forest which light pours through, in the soft rosy browns of “Equestrian Cloud Movement” you notice a spot at the top where you would expect a horse would be: his missingness is a glowing gap.

Hubbell’s horse-legs are triangles coming to scissor point, suggesting surefootedness through their dreamscapes of romp, or — nightmarishly, placement like the point of a compass: reminder these horses might not be free-roam, someone else might own the compass and the board, and these dreamy horses are only longing to rule the range, but are hobbled.

The gentleness of Hubbell’s colors says think no such thing; but then, consider, how the very shape of a canvas, square or rectangular, is the shape of pens — where wild horses might be kept, corralled. 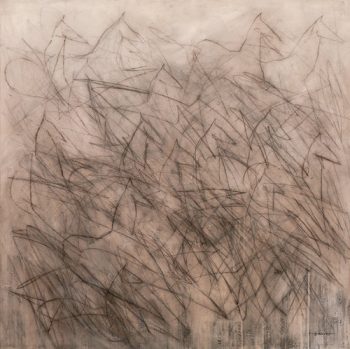 We can guess these horses do not represent a ghost dance of the spirits of dead Indians — who ghost-dancers believed were revived by the messianic dancing-in-a-circle “ghost dance” which rippled across the country, then mostly ended with the Battle of Wounded Knee when many ghost-dancers, men, women, and children, were killed. The Navajo rejected the “ghost dance,” not believing, as ghost dancers did, that their special shirts could protect them, even, from bullets.

Hubbell, the artist, is the Old West and the modern West, born in Navajo, on the New Mexico, Arizona border of the Navajo Nation, Hubbell attended Arizona State University, earning a BFA in painting and drawing and minoring in American Indian studies; he lives now on Navajo Nation land in Window Rock, Arizona.

The word Navajo means “large area of cultivated land.” True to that, Hubbell ranches, has livestock, including horses he often rides. He paints almost every day, says his artist statement, sometimes riding before painting, to set art-mind in motion. His last name Hubbell, like the fat paradox of the wild mustang (their graceful, natural movement versus their capture in the American West) expresses the paradox of his life: Hubbell Trading Post in Arizona is a national historic site, selling Indian artwork for generations, over time a sort of Hubble Horsehead nebula of Indian art.

My themes are “rooted in the correlation and the conflict of both my Native American and Contemporary mindset,” Hubbell writes in his artist statement.

Yet Valhalla, the Vikings’ promise of wonderful place you would go to and live forever if you heroically lost your life in battle, the Navajo would probably understandably believe was only bribe; the Navajo do not, historically, believe in an afterlife.

Could this, then, be the reason for the greatness of Indian art? That the afterlife is there, in the artwork: this is how the Indian lives on; this is what is sacred? 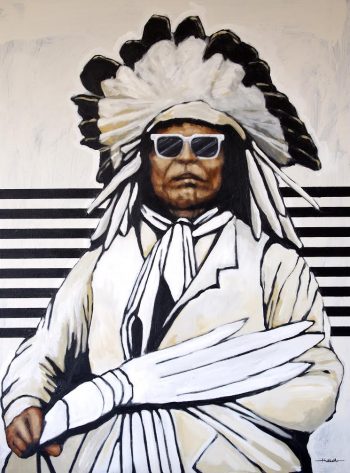 Patrick Dean Hubbell also paints what he calls “Almost Portraits” – which he says he has painted from historical black-and-white photographs of American Indians. Each, as in “Turning Eagle in Black and White,” wearing sunglasses which Hubbell has added, himself, to their painted image. Each looks a bit like the mourner at a funeral who does not want the world to see his tears: or, as if he or she wears sunglasses to protect him or her from a truth or reality of what is in front of him or her, shielding him/her from some nameless startlement.

Behind many of the painted figures are regular, repeated horizontal bars of color — not vertical bars, as in prison bars, but horizontal bars rising up to shoulder height, representing lines of power and connection, or of some sort of bars of entrapment. Or both.

So here Hubbell is at Modern West; his paintings of romping dream-horses, looking like ripple of range behind the gleaming glass windows of Modern West facing 200 South; a block away in huge glowing red neon letters are the mysterious words IMPACT HUB; a Maverik convenience store “headquarters” “base camp,” proclaiming Adventure’s First Stop; and all of our blue-purple mountains, corralling us.