When the Serigraph Came to Town 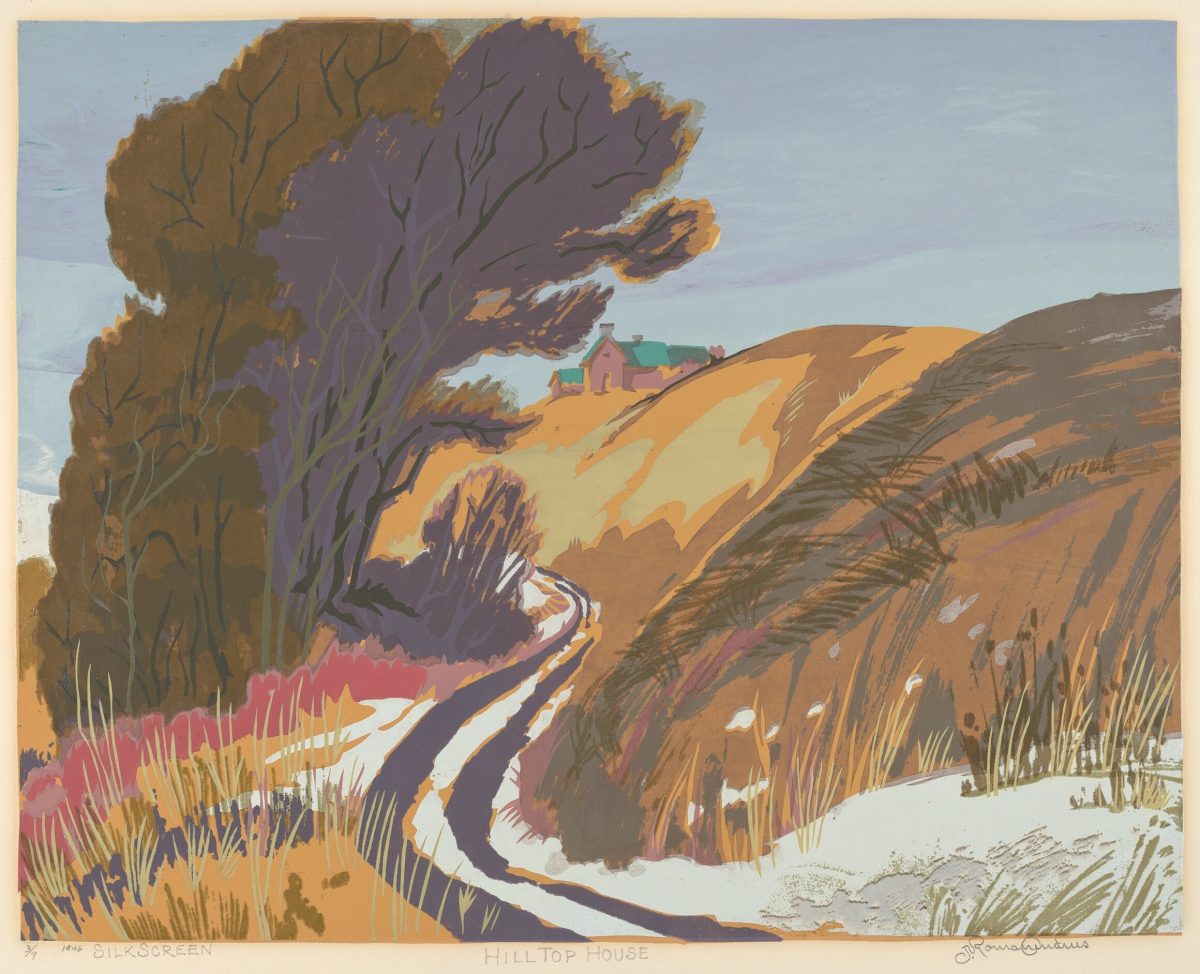 Maybe it seemed to come to him in a flash of divine inspiration. Or  maybe it was simply a mundanely obvious solution to the task at hand. When Anthony Velonis joined the Work Progress Administration’s poster division during the Great Depression, he became one of scores of artists making posters (public service announcements, for the most part). They painted them. By hand. Why not, he suggested, produce them using silkscreens.

The basic process of screen printing goes back more than a millennium, to China, where the process of pushing ink through a mesh was used to transfer patterns to fabric. In France, during the 18th century, silk stretched over a frame became the most effective screen for the process, and in the early 1900s, the squeegee was introduced, completing the basic screen printing setup we know today. Velonis had become familiar with the process working in his brother’s sign shop, was interested in its artistic possibilities, and realized its potential to create inexpensive reproductions. The Federal Art Project’s Silk Screen Unit was born. It is not nearly as famous as the mural division, but its influence was both immediate — from 1938-1943 the Unit churned out hundreds of thousands of posters — and far reaching. Artists from the unit began creating layered, rich works in the medium (and coined the term “serigraph,” a Latin-Greek hybrid meaning “silk writing,” for the artistic output of the process); founded the National Serigraph Society to promote the work; and established their own gallery in New York City to exhibit it. And almost immediately, the F.A.P. began proselytizing the new printmaking technique across the land. 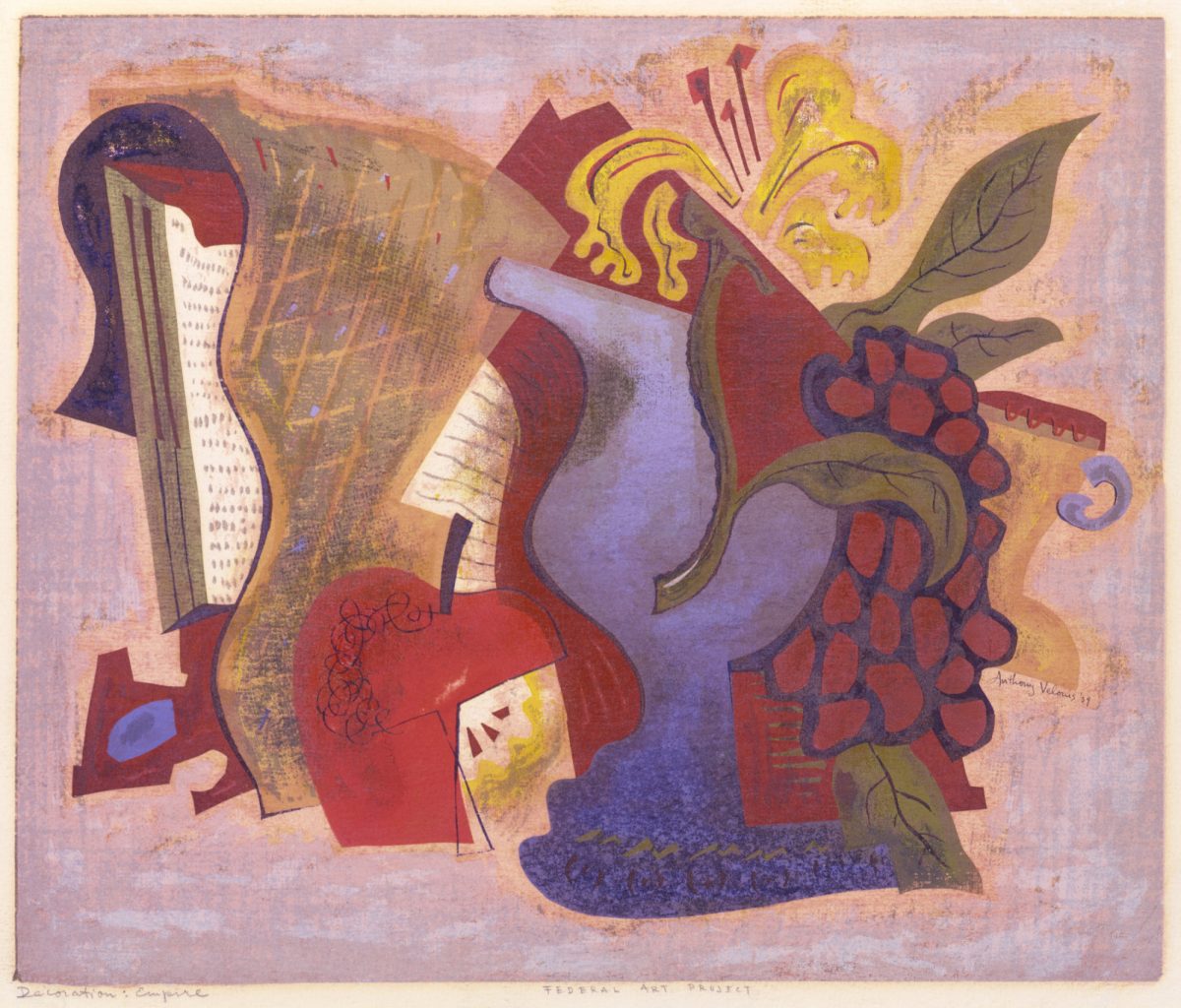 As national director of the F.A.P., Holger M. Cahill’s job was to spread the word. In Salt Lake City on an inspection tour in 1940, he played to the gallery, pointing out local benefits while singing the praises of the silkscreen technique. The government, he explained, had wanted to make a portfolio of the designs created by Mormon pioneers, in textiles, pottery, cowboy art and especially in quilts. The cost, however, had been prohibitive. “Lately,” he told his audience, “we have hit upon the idea of using the silk screen process instead of the much more expensive color printing process.” A portfolio of 15 to 20 quilt block designs would be produced in a limited edition and distributed to schools and libraries (Salt Lake Tribune, 18 Sept. 1940, p. 18).

Exhibitions soon followed, in Helper, Price and Salt Lake City, featuring landscapes, seascapes, still lifes and figurative work in serigraphs by the New York artists who pioneered the technique: artists like Elizabeth Olds, Harry Gottlieb, Leonard Pytlak, Man Warsager and Beatrice Mandelman. Before she moved west, before she discovered abstraction, Mandelman, whose work is on exhibit this month at Modern West, was an urban artist and serigraph pioneer.  With her seigraph work of the time, Mandelman was able to mimic the loose, expressionistic feel of her gritty paintings. As a critic wrote of the Utah Art Center exhibit works, “[Screenprinting] can be so handled as to give the lightness of transparent watercolor or the richness of a heavily painted surface.” 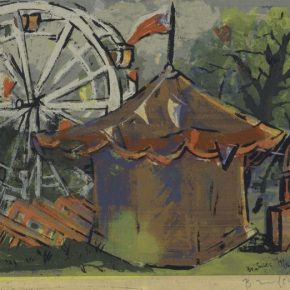 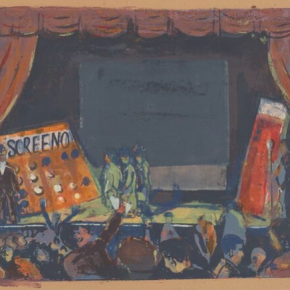 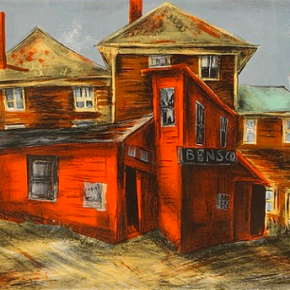 (Serigraphs by Mandelman from the pre-Taos years. Click each work to learn more)

As it did with the rest of the W.P.A.’s endeavors,  World War II brought an end to the F.A.P.’s Silk Screen Unit. But the silkscreen did not go away, at least nationally. Silkscreen tools  were included in the hobby kits that went out with deployed soldiers. At the Amache Concentration Camp in southeastern Colorado, incarcerated Japanese Americans ran a successful screen print shop that produced works for the U.S. Navy as well as for internal use.

After the war, the serigraph reentered the Utah scene from several avenues. Almost as soon as the war was over, in December, 1945, Brigham Young University professor Roman Andrus was providing free demonstrations of the process to the public. A St. George native who had studied at the Otis Art Institute in California before returning to earn his B.A. from BYU in 1940, Andrus was one of the most forward-looking artists at the BYU art program. He directed their printmaking classes, where serigraphs became a regular feature and students like Lloyd M. Gustaveson and Willard Gerber were soon winning praise for their serigraph works in BYU’s annual student shows.

Other institutions soon followed: W.D. Foulger spoke on the subject for the Ogden Art Club, Ruth Maroff taught it to adults at the University of Utah, and children learned it at the Pioneer Craft House. At Hill Air Force Base, its commercial applications were demonstrated. In 1947, a silkscreen manual published nationally was publicized in the local papers. In advertisements in the same papers, models in silkscreened blouses showed off the latest fashions. For the DIYers, the Salt Lake Telegram published an article explaining how to make your own silkscreened fabrics at home.

When Frank Bacher, a Swiss-born artist who grew up in Salt Lake City and studied under Cornelius Salisbury and Henry Rasmusen, returned from several years in New York City, he brought with him his serigraphs. Bacher had left for New York an expressionist, but returned a hard-edged nonobjective painter. The silkscreen well suited his reductive style and reduced palette and he brought the technique to the Art Barn, which at the time was swelling with students, especially war veterans studying on the G.I. Bill. 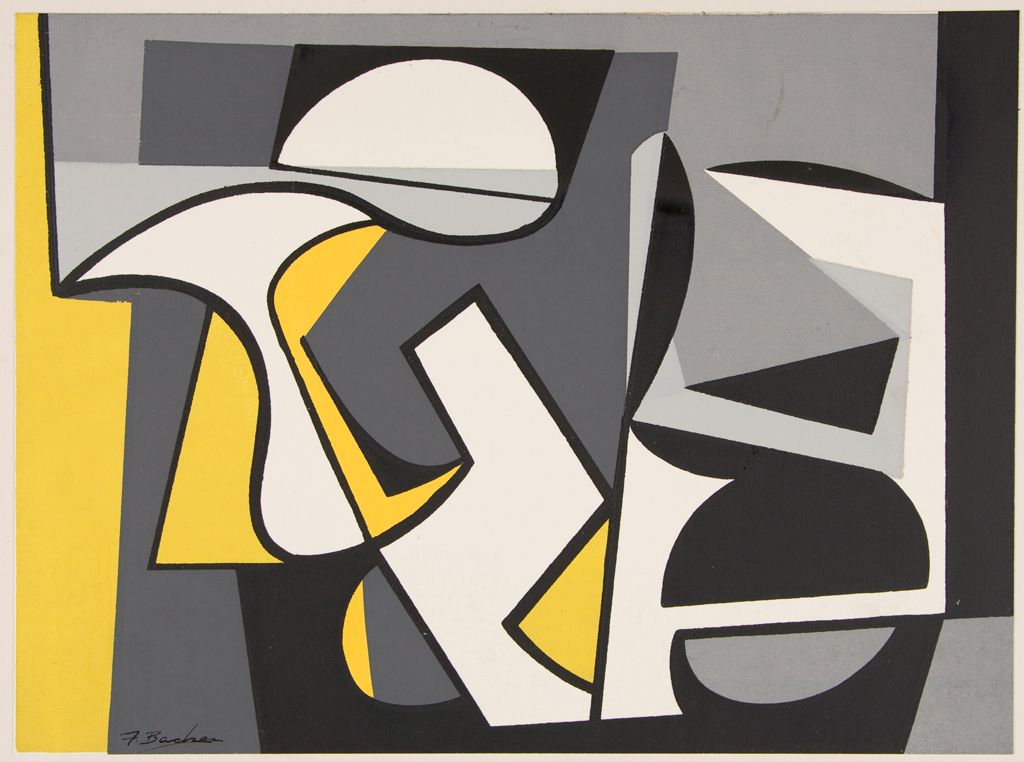 This serigraph is part of the portfolio Bacher created in 1946 for admission into American Abstract Artists (Courtesy Harvard Art Museums/Fogg Museum, Gift of The Judith Rothschild Foundation)

Seeing is believing, and with the F.A.P. and its Utah Art Center defunct since 1942, in the post-war period the responsibility to convince the public of the merits of the serigraph fell on the artists and local galleries. From its earliest days, the Art Barn had exhibited printmaking techniques and added serigraphs to the mix. When a young group of Art Barn graduates and similarly modernist-oriented artists formed the nonprofit Contemporary Gallery, in 1952, they closed their first year of exhibitions with a collection of serigraphs from a California group. Though the technique had been around for more than a decade, Wally White, writing for the Salt Lake Tribune, called the serigraph “one of the most recent art forms to be developed in this country” (White was new to, and not long for, the art beat at the Trib). He was right, however, when he wrote that, “Looking at one of the prints from a distance, it could be a water color or a tempera. Closer examination reveals textile-like characteristics and, usually, a clean uniformity of line … Subject matter is unlimited … Figures, abstractions, still life subjects, scenes, are all employed.” (Salt Lake Tribune, 21 Dec. 1952 p. 67)

The serigraph print was perfectly adapted to the style of painting that characterized what was then called American Indian Art. An umbrella term for related styles developed in the first half of the 20th-century, Flatstyle was characterized by a heavy emphasis on line and solid colors, with little shading or use of perspective. Woody Crumbo, a prominent Indigenous artist who worked in the style, recognized the silkscreen’s potential to reproduce the style and set up a studio in Taos in 1948. In 1952, he brought his silkscreen vision to the Intermountain Indian School, a boarding school for youths from the Navajo Reservation, established in Brigham City in 1950. Allan Houser, a nationally-recognized artist from the Apache nation, was the art instructor. He had been taught Flatstyle by  Dorothy Dunn at the Santa Fe Indian School, and though he later objected to the prescriptive and restrictive nature of the style, he produced a number of works in it, including serigraphs. He taught both the style and technique to his students, including Robert Chee.

“First Date,” a pair of serigraphs by Robert Chee, was part of an exhibit at BYU’s Harold B. Lee Library, June, 2019.

By the mid-1950s, the serigraph was firmly established as part of a growing art community in Utah. Francis Zimbeaux, an Art Barn student from the days when Bacher taught there, used the technique in a series of works he exhibited at Salt Lake City’s The Gallery in 1956. A pair of works depict a cathedral in Mexico (possibly Taxco). The vertical one, especially, attempts for a painterly effect, with just a few of the straight edges for which screen printing is best known.  The following year, BYU featured an exhibit of 40 serigraphs by noted western artists. Angelo Caravaglia was offering a graphics course that included printmaking and serigraph at the U, and in the spring showing of graduates at the university of Utah, Morris Musig, who won a large share of the awards, took first and second place in graphics for two serigraphs, “Dynasty” and “Caves of Kor.” That same year, in Ogden, Harry Taylor, one of Utah’s better known printmakers, won a prize for his serigraphs. In 1959, Marilyn Stillman, a U of U graduate won a national prize in the filed of graphic arts with a serigraph. 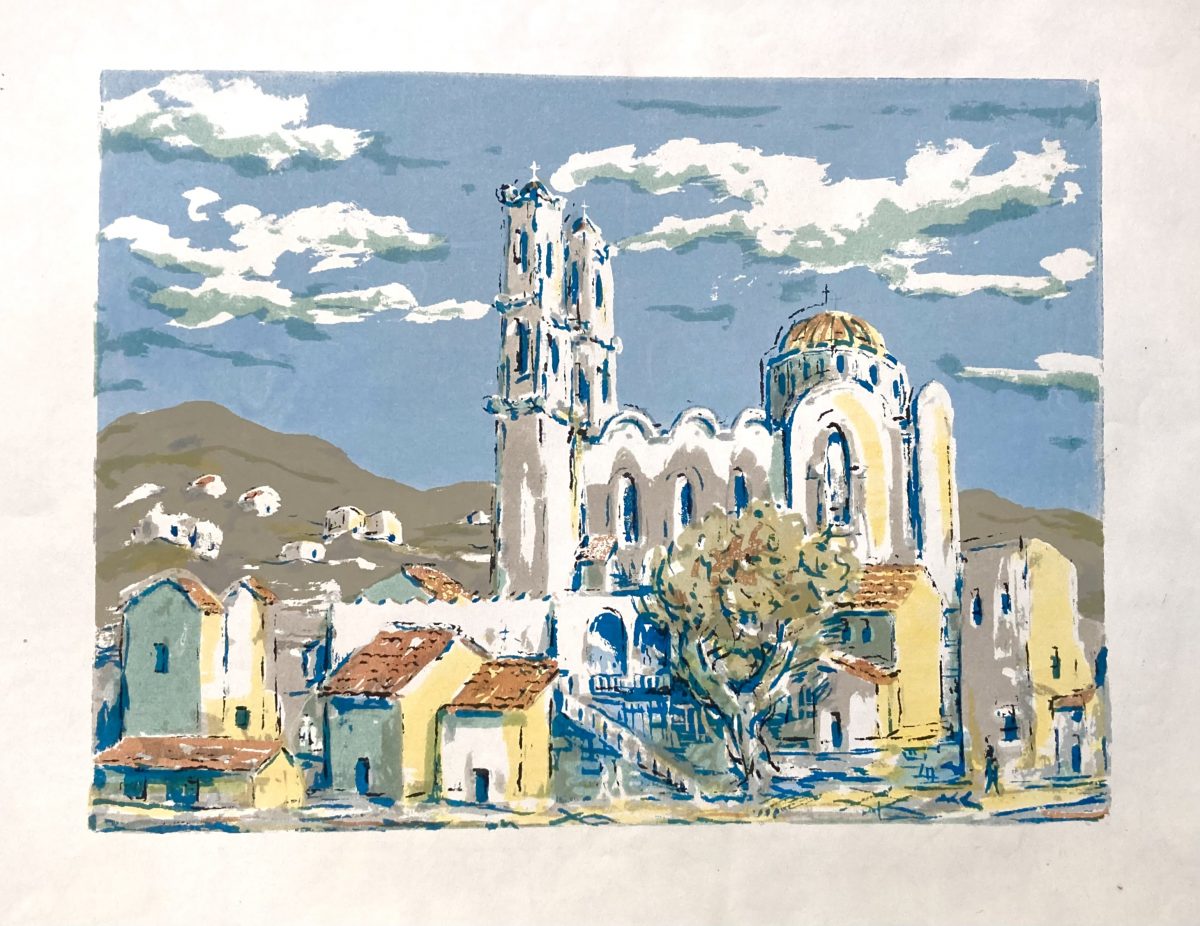 Silkscreen print by Francis Zimbeaux, unsigned and unnumbered, circa 1956 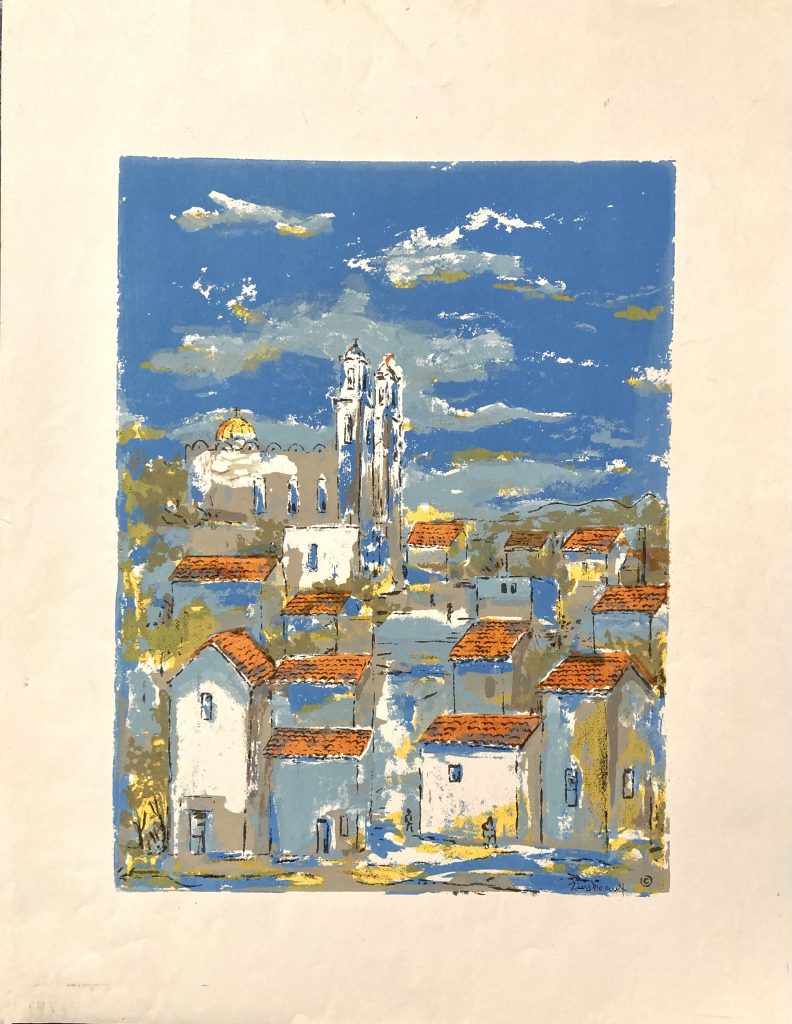 Silkscreen print by Francis Zimbeaux, unsigned and unnumbered, circa 1956

By decade’s end, the serigraph had become a firmly established art form, on par with etching, lithography and woodcuts. Its real glory days would come in the next decade, when Pop artists like Robert Rauschenberg, Andy Warhol and Peter Blake would incorporate it into their work. The invention of Plastisol ink in 1959 also meant that everyone wearing a t-shirt could display a work of art. New processes would eventually replace the silkscreen in mass fine art reproduction, and silk itself would be replaced by synthetic materials in screen printing, but the technique remains a versatile tool for fine art printmakers around the world. In October, the BYU Museum of Art will open an exhibition of works by Romare Bearden that will provide an opportunity to view this important artist’s work in the medium. And in a follow up article in 15 Bytes, we’ll visit with some Utah artists who continue to use screen printing in their work.

This article is part of Before Now, Artists of Utah’s program to explore the history of Utah’s art world. If you would like to support these efforts, please make a contribution to Artists of Utah.