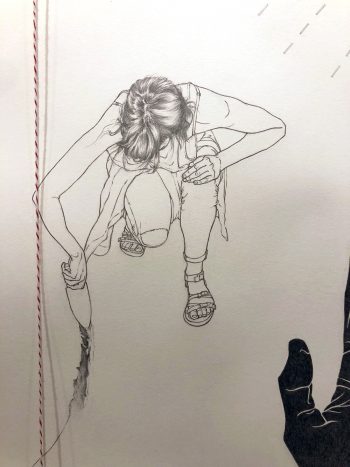 Detail of “A Meeting of Our Parallels,” with a string showing where the drawing will be cut.

From time to time, artists redirect the trajectory of art. Sometimes they make huge changes: ones that large parts of the art world then follow. At other times, subtle, self-contained discoveries stand alone, changing the way we think about art more than the way it’s done. And while the artist’s intention may be decisive, mostly the artist knows no more about what has occurred than the audience, and is just another witness to what is, finally, a human discovery. Two pivotal events, each falling somewhere on those sliding scales, took place this month. One, because it happened in a well-known location, where world scores are made and kept, and sold for over a million dollars, was widely noted, though not well understood. The other, because it happened in Utah, and sold for $10 an inch, was an enthusiastically appreciated, if primarily local event. But each, in its own way, made an important advance in the way art can participate in the world’s discourse.

The earlier event, no doubt familiar to 15 Bytes’ readership, was Banksy’s decision to shred a painting in order to prevent its becoming the latest work by this mysterious street artist—or vandal, to use his self-description—to fall into the hands of marketing manipulators. It should be noted that no one knows for sure who intended what to happen in this story; knowledgeable principals have not explained (or perhaps that should be, confessed) their parts in the events. But the purchaser of the painting may have inadvertently spoken more truly than she knew when she said she had bought a moment in the history of art.

Think about this. Can anyone cite another example of a well-known work of art being shredded? Slashed, burned, hammered, splashed with acid, dynamited, crushed under a collapsing 110-story building, yes. And always by someone with an agenda, a deranged point to make. But while commentary on the shredder story has focused on the artist’s decision to destroy his own work—hardly a unique event, however unconventional the motive—it tends to shortchange his unique method. In fact, in a few short decades, shredders that can quickly destroy a whole range of documents have become a ubiquitous fact of life, as essential in businesses and homes alike as computers and printers, even playing key roles in celebrated criminal cases. Yet in spite of the complex, generally trivial, occasionally venal, but often indecipherable role in our modern culture played by shredders, no major artist, before Banksy, has seen fit to incorporate one into a work of art.

Moving on, then, what connects Banksy’s act with A Meeting of Our Parallels, Mary Toscano’s current show at God Hates Robots? Surely slicing up her work isn’t part of the plan. Or is it? 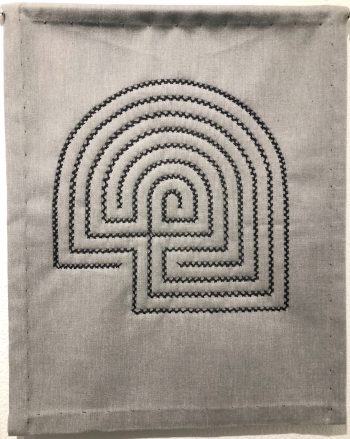 The title, both of the show and its principal work, refers most closely to the internal parallels that scaffold her three major works, lending structure to them individually and in combination.

Toscano draws superbly, capturing entire, implicit narratives in extraordinary images, the subjects of which she frequently repeats, in variations with or without context, in ways that underscore their importance to her. Virtuosity in her drawing is matched by conceptual diversity: one image, a maze-like symbol with architectural associations, appears throughout “Primer,” seven embroidered textile variations; it’s drawn on a hand in “Now/here,” a set of nine letter-pressed cards; and it repeats both schematically and in 3-D perspective across the title work. It’s also echoed, if not precisely duplicated, in one among several variations on the image of a snake: specifically in “Snake Charmer,” a dexterity game where the player maneuvers tiny balls along a hermetic, maze-like journey that in a more mythic context might be made by the observer in person. In fact, Toscano’s images frequently foreground this often-overlooked quality of art in general: that what is seen is accessible to the eye and mind, but not present to actual experience.

It must be admitted that these parallels—deliberate coincidences that appear more often the longer one looks at the works—suggest some esoteric meanings, such as appear in religious iconography, where a bird, or a cross, or a crescent moon may represent a complete narrative, or pages of doctrine. For those with a taste for research, or access to the artist, following these leads might satisfy curiosity and enrich the overall experience. But because they refer to things available to everyone, they are equally subject to exploration in the viewer’s own experience, or to imagination, or even direct apprehension, accompanied in this case by admiration for the artist’s almost incandescent rendering of visual information.

In other words, artworks, whatever else they may intend to be, are facts—data—and as such are sufficient in themselves, before, or even in the absence of, interpretation. And this is where A Meeting of Our Parallels makes its deepest penetration into our shared, contemporary conversation. Right now, at this moment in history, the very existence of facts is under attack. Widespread speculation about accurate reporting in the media and in personal testimony has led to unprecedented interest in precisely how truth may be experienced, interpreted, and most importantly, how it can be reliably transmitted between individuals. One small example, going back over a decade, shares the polymorphous quality so central to Toscano’s art, and that of many other artists’ as well. What began as a tragic event, the suicide of a teenager in Las Vegas, became a magazine article in 2005 that aroused criticism when its author was called to question. The dispute became a series of letters between the article’s author and the magazine’s fact checker, followed by commentary in other publications and a book, co-authored by the principals in 2012. Now it’s a Broadway play, starring Daniel Radcliffe as the fact checker (in my opinion, the proper hero of the story). That reappearance of the same material in multiple media gives it weight and gravity it might otherwise never acquire. And, in Toscano’s version, it sets the stage for a technical and thematic breakthrough. 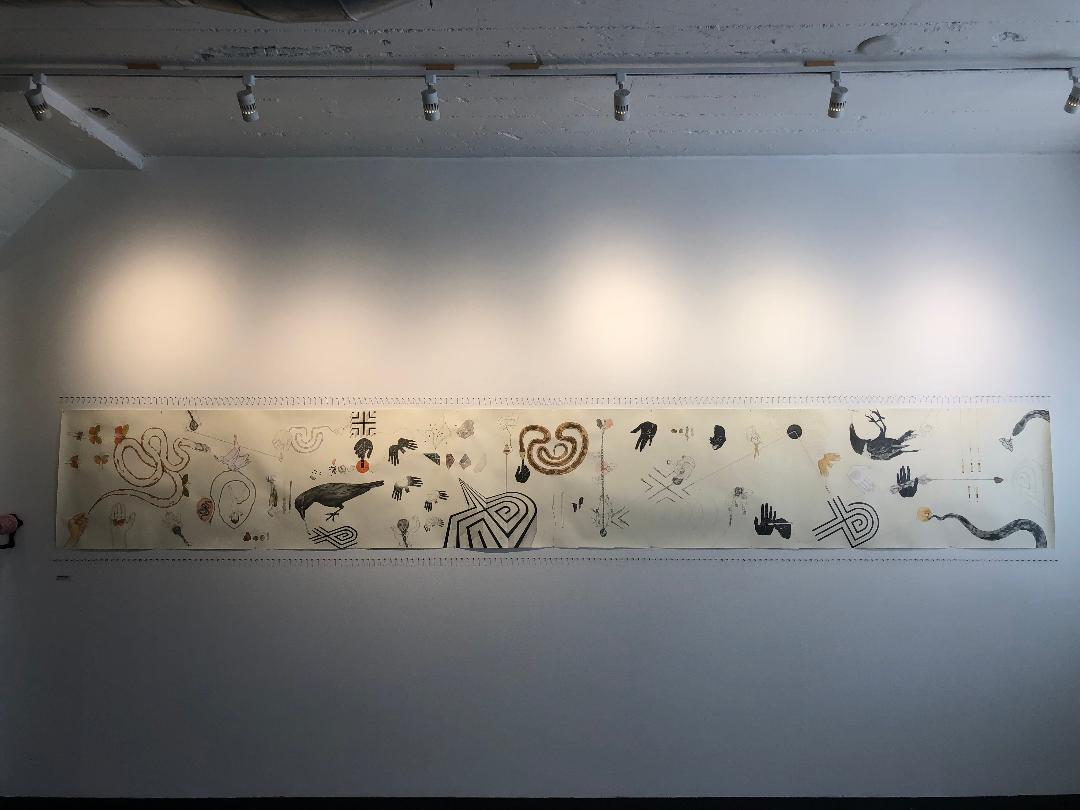 “A Meeting of Our Parallels”

“A Meeting of Our Parallels”—the title piece at God Hates Robots—is approximately 15 feet long and 25 inches tall, or just over 31 square feet. It consists of possibly as many as a hundred individual images, each drawn from the artist’s visual vocabulary: nature studies, hands, anatomical dissections, perspective views, cryptic glyphs, and so on. Exactly how many there are depends on how the viewer’s mind chooses to organize and divide them. Some are oriented to the bottom edge, as it’s hung in the gallery, while some are oriented to the top edge, and might be described as upside-down. The artist’s (apparently) final innovation was to set up a means to allow would-be collectors to select and reserve portions of the total composition, in accordance with accidental, even haphazard relationships between her organic drawing and the mechanical grid, into which the work will be divided at the conclusion of the show. This innovation, which involves as many nails protruding from the wall as there are days in a year, a spool of twine in a vintage-looking holder, and the kind of manila ID tags sometimes styled “toe tags” (on account of their use in identifying corpses), is worthy of recognition in its own right as an assemblage sculpture. But its operation is also a sophisticated part of the exhibition, commenting on and indicting the audience in the universal, and universally problematic, art of trimming reality to fit into a pre-existing box. 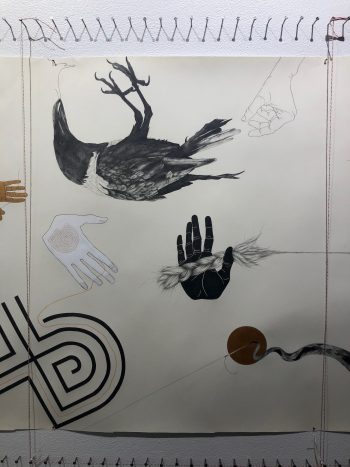 Detail of “A Meeting of Our Parallels,” with images appearing from different orientations.

As a recent article on the challenges of fact checking, which appeared in the New York Review Daily, explained: “Absence and elision are entailed in any narrative or framing—any story [or image] is necessarily defined by what the frame chooses to leave out as much as what it puts in.” Nonfiction rules notwithstanding, for much of art history that decision was primarily left to the artist. It was only with the invention of photography, with the camera’s insistence on capturing subjects half in and half out of the frame, that an artist’s routine act of choosing became obvious. Yet even then, the ordeal of an artist, forced by circumstances, such as the rules of composition, to adjust the relations between parts of an image, or leave some elements out altogether, was that artist’s alone.

Mary Toscano appears to have broken this pattern, allowing the viewer an admittedly limited share in the choice of what to include and what to exclude. The arrangement of the artwork is given, as are the independent locations of the nails, and hence the precise places that may be cut. If a string crosses over the middle of the image, it will end up separated like one of those diptychs you can find in two different widely separated museums. Forty inches is the maximum length of any single part, and cuts are vertical only, so the full height will be included in any purchase. There is nothing, except of course respect for the probable intention of the artist that the final form not be in any one person’s complete control, to keep the buyer from taking a part home and “cleaning up” the composition by trimming it more closely. But ours is a time when all bets are likely to be off, when rules have been disrespected down to just about zero, and while some signs are visible that things are beginning to turn around, Mary Toscano’s meeting of parallels presents a vulnerable opportunity. Are we ready to jettison one last vestige of traditional art: the sacrosanct authority of the artist, herself? If so, we will truly be in uncharted territory. 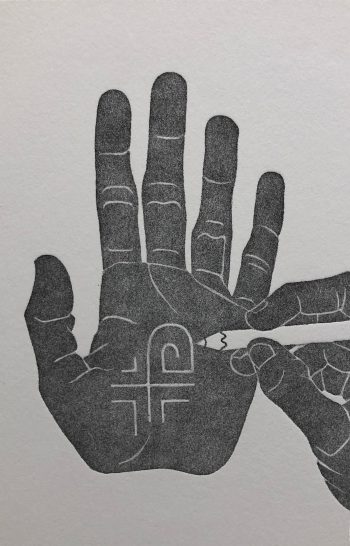 The question A Meeting of Our Parallels asks is not unlike asking if we should use Scotch tape to put Banksy’s painting (Now retitled “Love Is in the Bin”) back together. There are parallels between the two artists’ achievements, but they move in opposite directions. Banksy, whose view of the artist is rooted in his vision of himself as a vandal, an outlaw, takes the arguably male position that the artist makes all the decisions: his fundamental choice to impose his works willy-nilly on the property of others speaks to this attitude. Toscano, by contrast, invites her audience to collaborate with her. By the way she offers her work to them, she creates a community, which in our present moment and circumstances is work largely left to women. In the text of “Now/here,” Mary Toscano reveals some of the consequences of her choices, and the decision by the viewer to choose as well. One part reads:

Pulled tight, the cord will rub and fray against the edges of your path. It will snap. You will feel it sag and know you’re adrift with the sudden looseness. Let it lay slack from the start. Better to never feel secure at all.

A Meeting of Our Parallels,work by Mary Toscano, God Hates Robots, Salt Lake City, until Nov. 9.