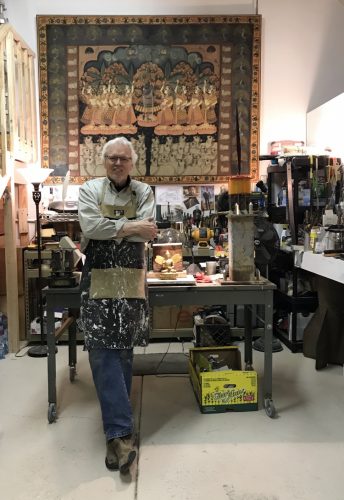 Frank McEntire in his new studio.

Frank McEntire is a gatherer; he’s an assemblage artist and they just can’t help themselves. He thought doubling the square footage of his studio last year would help with his enormous collection of stuff, so while he is still located in an old warehouse on a dirt road built as part of a World War II military base in Kearns, he now has bigger quarters to work in — though still not big enough for all THAT.

McEntire renovated the new space, built an upstairs and even purchased the large semitrailer he used for storage, but things remain tight because his raw materials still exceed the space he has available.

In 2018, however, McEntire has some outstanding goals, a couple of which might actually serve to reduce his inventory:

He is preparing First Response, a solo exhibit at Nox Contemporary in April. Any sales, of course, will reduce what he has to take back and store in the studio.

And McEntire would like to have a book published about himself and his work: “If Tony Smith can do it, well . . .” says McEntire. Smith’s a great pal of his. The sculptor, independent curator, arts administrator and former director of the Utah Arts Council was the art critic for The Salt Lake Tribune and also wrote a book on V. Douglas Snow (University of Utah Press, 2013) and turnabout is fair play. But that doesn’t clear out his studio.

Spontaneous Memorial, however, an interactive exhibit about 9/11, has been shown somewhere in the United States nearly every year since 2004; in 2018 it will be seen at the Bountiful Davis Art Center. Since fresh elements are added each time, this expanding body of work needs to be documented and archivally stored. That would really increase studio space. “It provides an opportunity for reflection and a means for patrons to express their views about the terrorist attack and its continuing destructive aftermath; after all, those military-industrial complexes around the world need to be fed,” says McEntire.

So this year could prove to be “the bomb,” as they say in Kearns. Assemblage works by McEntire on view at his studio.