The Art of Losing Someone Who’s Still There: Dementia on Exhibit at Art Access 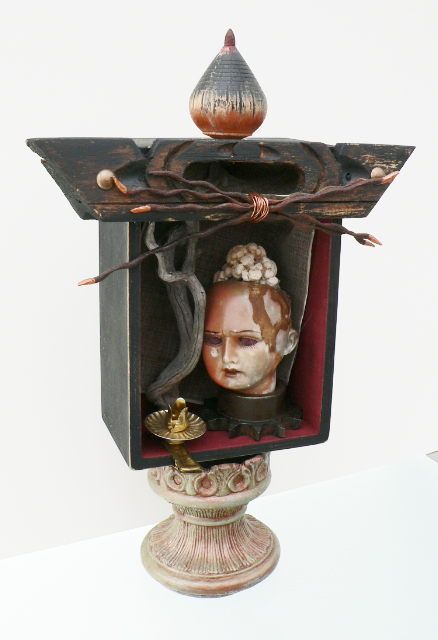 You’d expect an art show about Alzheimer’s to be dreary, depressing and certainly just for people of an age to be facing the disease. But What’s My Name? at Art Access turns out to be an exhibition that will fascinate most anyone.

As executive director Sheryl Gillilan says, “The stories — it’s all about the stories. The abstract depiction of Alzheimer’s disease progression, the humorous moments that arise when confusion and forgetfulness overtake minds, and the pain of losing someone you love even though they’re still there.”

One in 10 of us will lose our minds to some form of dementia before we die: more than 5 million Americans live with Alzheimer’s today (28,000 of them in Utah); that number is expected to increase by 50 percent just in this state by 2025.

The exhibit comprises art by those who suffer from the disease and those who care for them and it is powerful stuff. It shows how creative expression “stimulates memory, linking present and past, and how art making helps caregivers process the daily frustrations and fears that accompany their changing roles as their loved ones’ cognitive function slips away.”

Peg Hardin’s partner of 27 years, Margaret Hill, was a retired middle-school art teacher when she began showing signs of memory loss and cognitive challenges that would last for more than a decade until she lost her battle with Alzheimer’s in January of this year. The two began taking art classes together after they retired and Margaret’s ability is apparent in “Sonoma Hills,” painted en plein air, and “Little House in the Trees,” a beauty when she first completed it. But she returned to it in 2009 (when she needed assistance with activities), using thick paint — strong colors right out of the tube – with quite different results. It was her last solo painting.

This compelling and instructive portion of the exhibition is difficult to move away from.  But there is much more to see.

When Kathryn Romney was diagnosed with Alzheimer’s, she and her husband, Leonard, made the decision not to keep it a secret from family, friends or even the media, which has helped to dispel the stigma often associated with the disease. Leonard Romney had been taking art lessons from Marian Dunn and, after hearing about the positive results of creating art for people with Alzheimer’s, Kathryn decided she wanted lessons, too, and Dunn agreed.  While Leonard’s excellent “Alzheimer’s Disease from a Caregiver’s Perspective,” a watercolor, pen & ink, probably reflects his wife’s immediate decision not to drive, asking him to be her chauffeur, it’s a little more difficult to gauge from where her watercolors arise. The small and evocative “How the Fox Ate Alice in Wonderland” is delightful and deserves a close look; the painterly “Autumn Leaves – Nature’s Alzheimer’s?” also elicits a thoughtful response.

Curator Sue Martin’s paintings tell stories of her father’s descent into Alzheimer’s and his struggles with Parkinson’s disease.  She kept a daily blog as a way of sorting out feelings and staying in touch with family and friends. Years later, bits of the blog and other memories inspired this series of loose and colorful paintings that look at the “alternate universe of ‘La La Land.’” One, for example, shows her father sitting on the bed in his underwear, with a bevy of women across the room. The story that accompanies the work explains that he suffered incontinence at night and when her mother asked why he didn’t just get up and go to the bathroom, Martin’s father explained that he would have except for the fact that there were all these women in the closet!

Irene Rampton’s facile watercolors of her father are sad and memorable. One, called “Fading Away,” in watery blues and blacks, shows a fractured face. Hanging beside it, in a bright palette of healthy skin tones, a red and white checkered shirt and sunny yellow background is a hopeful portrait of the same man before dementia struck.  He suffered from memory loss and dementia for nearly 20 years, his last 10 years living in four different care facilities, his daughter recalls.

Lone’ Vilnius, the “daughter of an Alzheimer’s mother,” offers captivating assemblages, two of which had sold at the time of this visit. A very large one has to do with time – an important subject for those dealing with this illness. Another, a box containing a bisque doll’s head topped with an exposed brain, has a candle half burned down, another reference to time. “Unraveled” is an enormous spool of twine (unraveling) on a silver-colored stand with bunches of keys on rings (don’t we all lose those?) hanging from strands of colorful wooden beads. “I often worry about my own life journey,” says Vilnius, “and am reminded of these words, ‘Don’t worry that you can’t find your keys .. .only worry if you no longer know what they are for.’”

Abstract artist Jerry Hardesty says, “The emotion I felt when I entered the Alzheimer’s unit to visit Mom was overwhelming. Sitting in a chair, she was slumping to her left as she was being spoon-fed. Tears filled my eyes. Where was my Mom? I wanted to remember her when she became a belly dancer in her sixties. Mom hadn’t recognized me for years . . .”

He paints with acrylic, house paint, and oil pastel on cradled panel. He paints in layers. He scrapes and sands and repaints. “Each layer is a response to the previous one,” he says. He paints the seven stages of Alzheimer’s in acrylic abstraction. You will understand more than you thought possible.

“Muse,” a collage by Elizabeth Bette Barbano is a truly lovely work by someone who helps people with Alzheimer’s exercise creativity and creates art for her own pleasure.

As Gillilan says: “Art really can save lives, or at least help you process difficult emotions.  And nowhere is that clearer than in this exhibit.  Caregivers of loved ones with Alzheimer’s express pain, disappointment and humor, and people who currently have Alzheimer’s use art to express what is no longer expressible.

“This is one of those ‘Why we get out of bed’ exhibits—we’re honored to offer an exhibit like this to the community, and to have viewers and participants tell us how meaningful and moving the art is to them.” 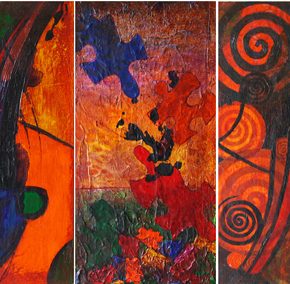 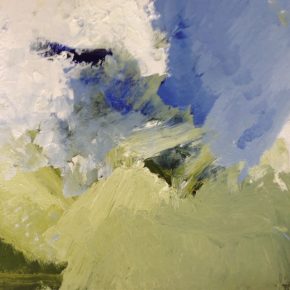 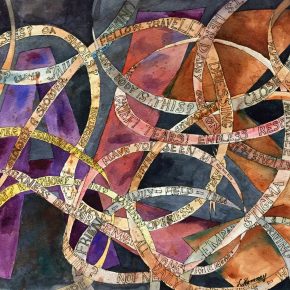 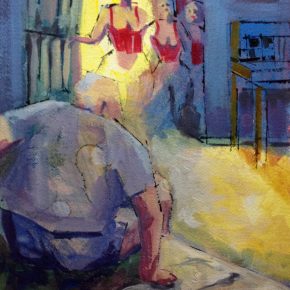 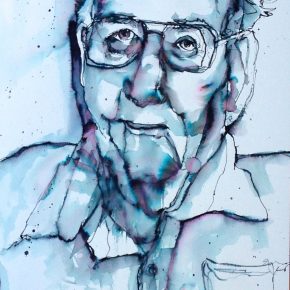