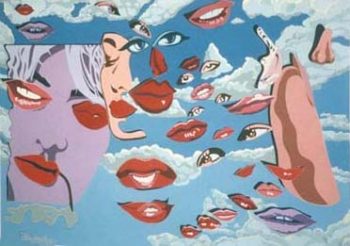 What if Edvard Munch’s famous painting had been named “The Migraine” instead of “The Scream”? Would it have become the iconographic emblem of existential angst it is today? Would it be hanging on museum walls (or being stolen from them)? Maybe. The work, after all, is the work, right? And the title is simply an appendage, right? Maybe, but ask yourself, how would you feel about the work if you knew it as “The Migraine?” What, after all, is in a name?

That is exactly what the upcoming exhibition at the Utah Arts Council’s Rio Gallery poses. And it does so by providing no names for the works whatsoever. That, the exhibition tells us, is up to you. Untitled, which opens May 17th and continues through June 9th with an artist reception on Friday May 19th, will feature work from thirty Utah artists and none of the works will be titled. Instead, stacks of 3×5 cards will be available for visitors to write down their “title” for the work and place it next to the piece. 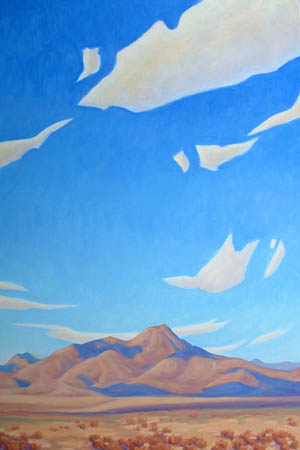 The exhibition is the idea of the Utah Arts Council’s Visual Arts Coordinator, Laura Durham. “Since we’ve moved to our new location in the Rio Grande Depot,” Durham says, “we have received a lot of increased traffic. There are a lot of people coming to the gallery on the way to the Archives or from the Rio Café. They are not coming specifically to see the exhibits but are stopping to take a look. We wanted an exhibition that would engage them a little more; something that would get them to stop and take a longer look.”

The exhibit was curated by Shawn Rossiter, editor of 15 Bytes and a professional artist himself. “Titles can be an excruciating thing for artists,” Rossiter says. “I know I’ve named some at the last minute. But I also know that certain titles can be the key for someone to enter a work. For others, a title might be the straightjacket that keeps someone from seeing what they see and not what they think they are supposed to see. What I think this exhibit does that is interesting is takes that responsibility or dilemma from the artist and gives it to the spectator.” 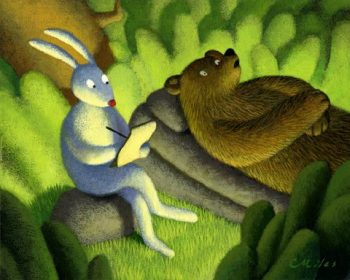 Thirty artists were chosen, from landscape artist John Berry in the very North of the state, to professor Brian Hoover in Cedar City. “I think it will be interesting to see what people make of the titling process,” Durham says. “I think it will get the patrons to really approach the work and try to find their way through it. And I think it may be very enlightening for the artists to see what people make of their work.” 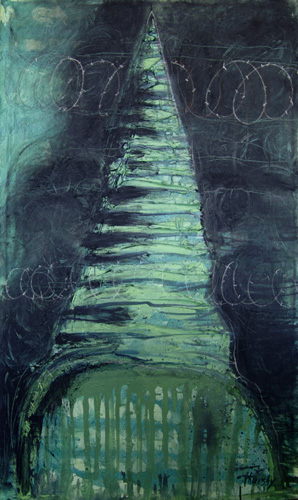 “I tried to pick artists who would provide a variety of art for the variety of people that would be engaging with it,” says Rossiter. The moods in the works will change from the playful piece by Chris Miles to something more moody like Trent Thursby Alvey’s|3|. Artists like Fletcher Booth, Gary Barton, and Darryl Erdmann work very large and their pieces will dominate walls. Other works, like Jim Frazer’s box piece, rely on close inspection. There will be photographers, like Jon Caputo, Tom Szalay and Kim Riley, and digital artists like Ed Bateman and Anthony Siciliano. You’ll see some very popular artists, like Patricia Kimball and Karen Horne, along with emerging artists such as Jeremy Herridge and Justin Angelos. Two- dimensional paintings, like that by Ric Blackerby, will share space with very contemporary works, like the wall hanging by Dorothee Martens and a piece by ceramicist and installation artist Etsuko Freeman. 3-D work will have equal space with the two-dimensional. In addition to those already mentioned there are sculptors Kent Rigby and Andrew Smith and multi-media artist Marcee Blackerby. “I think people will find that naming each type of work will prove to be a different challenge,” Rossiter says. “To name a piece by Holly Mae Pendergast may be easier or harder, but definitely different, than a piece by Joanne Smith.” 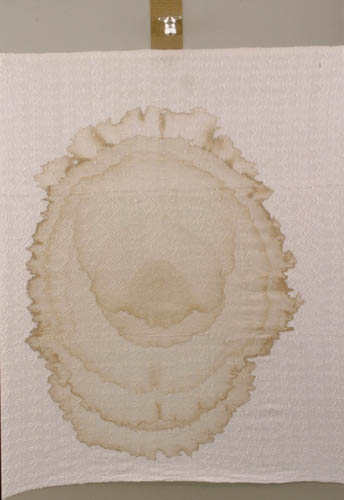 “Also, I chose some of these artists because their works will challenge the nature of the show.” Rossiter mentions Brandon Cook, a landscape artist represented by A Gallery. “Brandon paints landscapes, in the sense that he paints trees and mountains and water. But I’ve talked with Brandon a lot and I know that he has other things going on in his work. Will people tap into that, or will they call a piece ‘Two Trees in a Field?’” And then there’s an artist like Sam Wilson, whose works are packed with possibility and he has these wonderfully long, baroque titles for them. He definitely doesn’t need help titling, but I’ll be interested to see what happens when others take up the pen for him.”

Rossiter mentions other artists whose work he has followed that he thinks will be a good match for the show. There’s Frank McEntire, a sculpture who assembles religious kitsch to pose his own questions and explore his own interests. What will people make of the works, when, in an Adamic naming moment, they have a chance to identify the piece and reclaim their own kitsch? Nathan Florence, a narrative painter Rossiter wrote on in the January 15 Bytes, purposely leaves his works vague enough that the viewer can bring their own meaning to them. 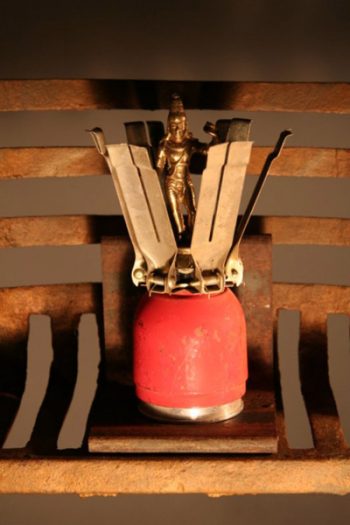 But what is all this bother with the naming? Does it really change anything about the work itself? Purists would contend that the work of art exists by itself as a visual entity that is self-contained and that any title (or artist statement) is extraneous to the piece and not really part of the artwork.

“On the other hand,” he says, “I think about Stanley Fish’s ‘Reader Response’ theory about literature – that the piece of literary art doesn’t exist until someone actually reads it and that it can exist in as many forms as there are readers. Is there a parallel ‘Viewer Response’ theory? That the artwork only exists when it is viewed? This is the opposite of a strict formalism. Each title will essentially create a new work of art. And some people might not be comfortable with that. But some people might not be comfortable with the totalitarianism of the artist’s will, either. Well, here they get a little title anarchy, but also the responsibility to bring something of themselves to the work in trying to title it.”

The Rio’s show poses an interesting dilemma for artists. Not only do they have to give up a part of themselves, as they normally do when exhibiting their art, but they even give up control over the name of the piece of themselves on display. Sculptor Tom Jackson says he has no problem with the idea of the exhibit, because, after all, he lets his patrons name the work on a regular basis.

Visit the Rio Gallery’s Untitled show and you’ll have a chance to approach the works unfettered and name them for yourself. If you name them for the artist as well (if the artist chooses your title as the permanent name for the piece) Artists of Utah will provide you a complimentary copy of one of the art publications which have been available during their Spring Fundraiser.