What You See Isn’t Always What You Get: Adam Larsen & Jason Lanegan at BDAC

In biology, circumstances—what scientists call “niches”—summon particular organisms into being. So it may have been inevitable that BYU and Snow College, two of the principal breeding grounds of Utah art, would each possess a teacher who is also a prolific artist, a keen student of local culture, a curator, and the director of his department’s gallery. Why one should be a printmaker who also sculpts assemblages, while the other is an assemblage-maker who also produces prints, may have to do with the ongoing conversation these two individuals forged together in their lives and art.

Between them, Snow’s Adam Larsen and BYU’s Jason Lanegan have, with geographical precision, bracketed some of Utah’s finest antique and junk store country. While that fact doesn’t dictate their shared interest in found art materials and assemblage, one may well wonder about what each would have done had this resource not come their way. Perhaps a more useful subject to ponder while viewing Beyond the Visible, though, is not what these two artists have in common, but what distinguishes them. 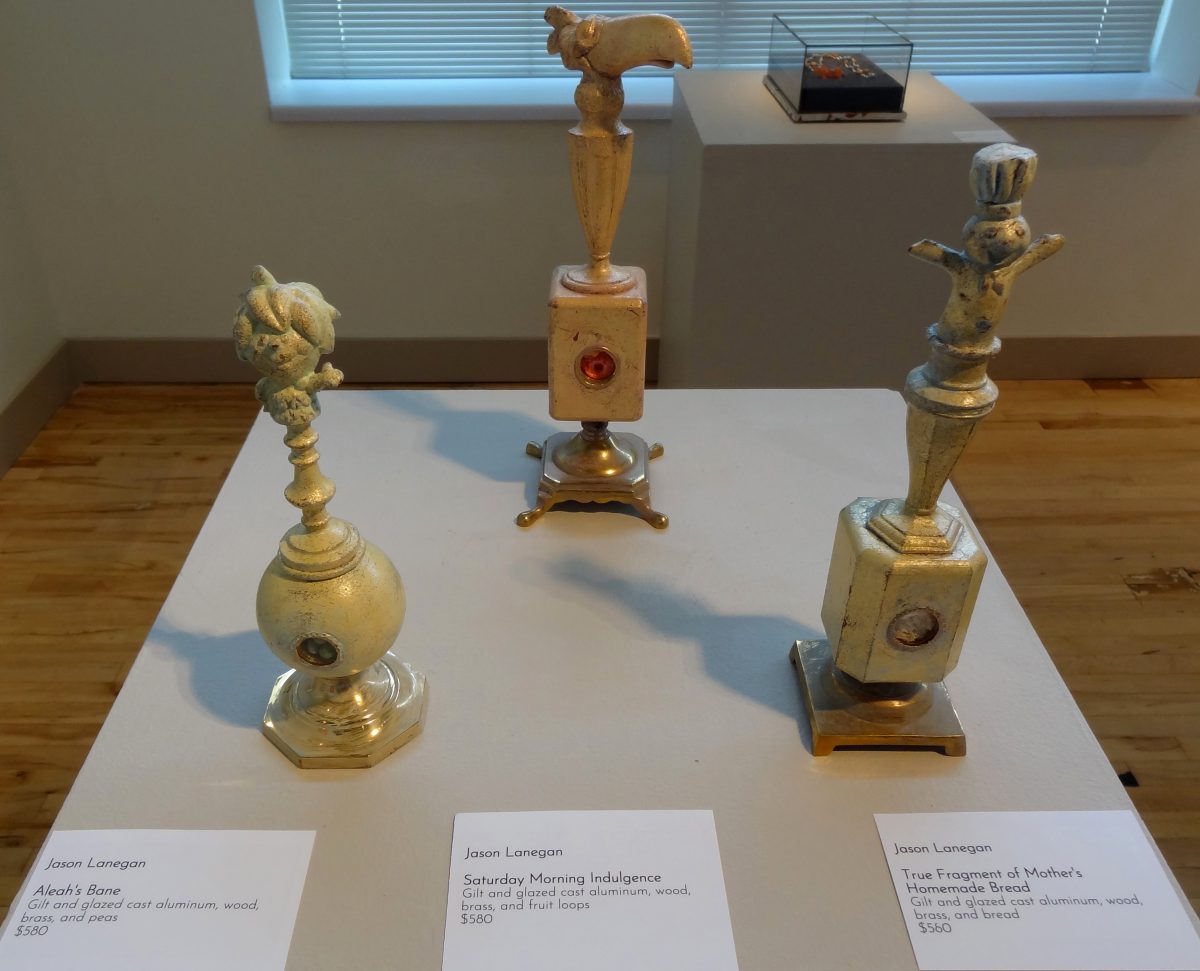 Jason Lanegan has made himself the master of a genre he has largely defined, which might be called the “secular reliquary,” although in his art, objects lacking canonical religious significance nonetheless possess both gravitas and personal value. The reliquaries at BDAC commemorate meals eaten and those who prepared them, home repairs, personal encounters, special places, and special times like childhood and summer. They do so in symbolically shaped vessels that are so skillfully conceived and executed that only the artist’s tongue-in-cheek gives them away. They also achieve a level of sophistication so high that it escapes even some sophisticated viewers. A recent review in 15 Bytes features Lanegan’s “Ancestral Reliquary III,” the upper half of which includes a spectacular panorama of Utah high country, while the lower half presents a domestic interior in the form of a crazy quilt, which includes a box of iconic objects that might be the title reliquary. Yet the reviewer overlooks the illusion created by the quilt, as well as the fact that the entire piece forms the silhouette of a house, which identifies the home as the real reliquary. It’s important to look closely at a Lanegan, and then look again. 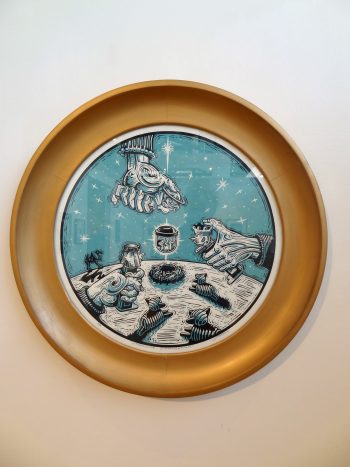 By comparison, Adam Larsen provides less irony, but more razzle-dazzle. His prints and his sculptural objects alike display almost impossibly perfect craftsmanship, though here he’s represented solely by prints. A classic Larsen, such as “A Party Favor” or “Immaculate Dispensation,” displays two levels of invention collapsed seamlessly into one. He first conceives, but does not actually make, his subjects: imaginary objects he then composes, sight unseen, into prints. Often they’re toys, a choice that may undermine the pretensions of his social, political, and religious subjects, or else may caution viewers not to accept them the way they wish to be seen.

And that, of course, is the point these two professors would like to teach, or at least to share with their audience. There’s something here far more nuanced than mockery. Take Lanegan’s “Summer Picnic Relic,” for example. On an orange square field, he juxtaposes a blue figurine of Yogi Bear and a window, through which the bear apparently admires an inaccessible, partially-consumed peanut butter sandwich. On closer examination, the orange color doesn’t entirely obscure a host of underlying images it was applied over: maps, envelopes, stamps, possibly a church, and several cartoon images of Yogi, in one of which he steals a picnic basket. Contemplating all this, it comes to mind that there is nothing haphazard about the choice of a peanut better sandwich. It’s as close as one is likely to come to a universal American meal, one we all start out having fixed for us. In time, we take a big step when we learn to make it for ourselves. Sooner or later, we experiment with the ingredients, eventually making this iconic meal in our own image. It’s a rite of passage, a measure of life’s progression . . . . 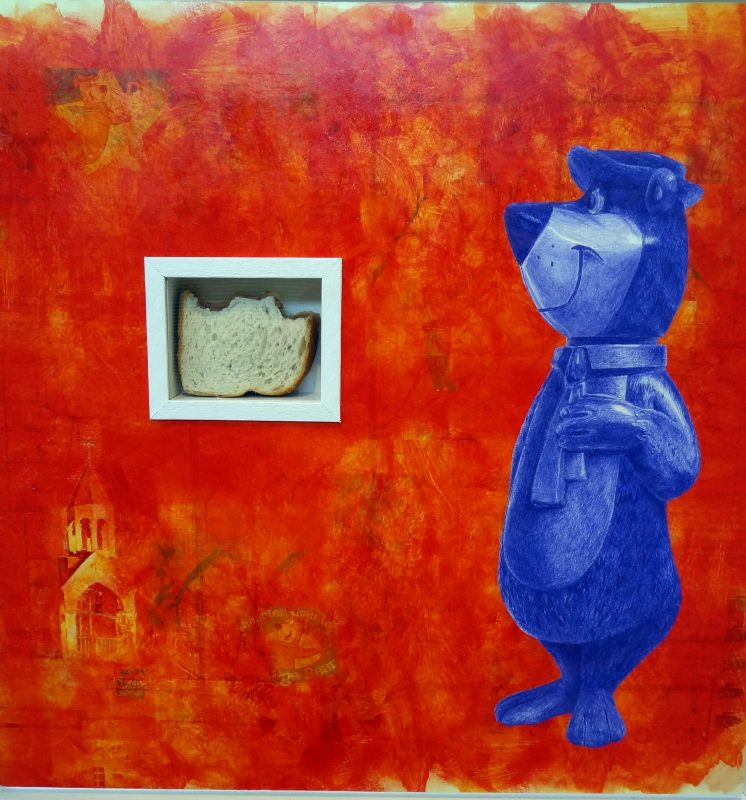 OK, maybe that’s taking it too seriously. But from Adam Larsen’s 2-cent can of worms to Jason Lanegan’s “True Fragment of Mother’s Homemade Bread,” we are being challenged here to calibrate values carefully. Let us never assume the pretentious is important, or that the humble is not.