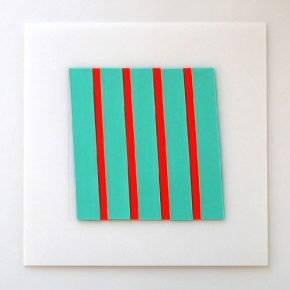 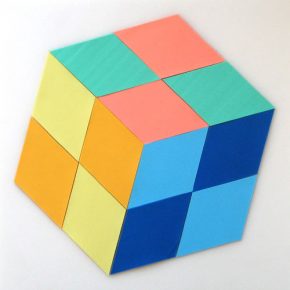 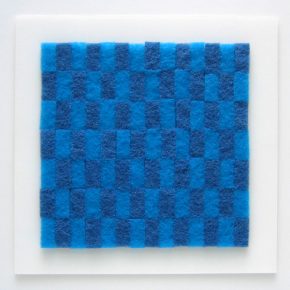 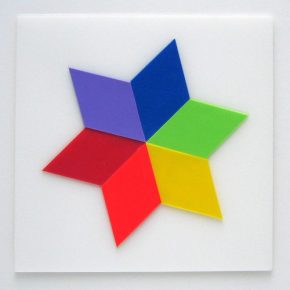 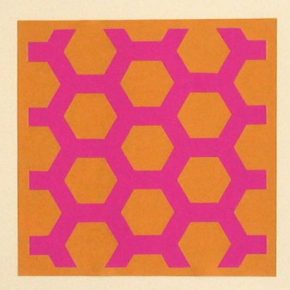 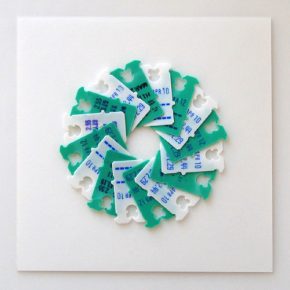 At first sight, Sean Morello’s two-dimensional works seem too slight to support a title that properly belongs to an encyclopedia. But to view What Art Is as a summary is to look through the wrong end of the telescope. Morello, like Art Danto in “The Transfiguration of the Commonplace,” wants to find out what differentiates an art object from one that looks like it but isn’t art. It’s an ambitious project, but one to which Morello brings generous quantities of two of the qualities he finds not only important to art, but to be its essence: decisiveness and skill.

What art is may have been taken for granted in the past, but over a century the question has moved nearer the center of art’s preoccupations. Mere decades ago, within the memories of older artists and academics, asking if art making as a human activity would still be possible was a matter for urgent discussion. In the 20th century, whether or not something was art moved from a general matter to a specific critique, while the big question was whether is was true that, as popular graffiti held, “Art is dead.” The proliferation of movements and mediums near the end of the century may look to the casual observer like signs of vitality, but that is an illusion. One thing Minimalism, Earth, Environmental, Feminist and Gay Arts, Performance, Installation, Hyperrealism, Appropriation, and a spectrum of seriously mocking offshoots had in common was roots in the feeling that “real” art — i.e. painting and sculpture — was following the house call-making family doctor into obsolescence. Had it not been for the radical idea that it could somehow survive the end of history — an idea at the core of Postmodernism — art as we know it might well have joined the 8-track tape and the telegram on the scrapheap of human inventions.

Not, of course, that there was ever any danger that art would cease to be made. Since image making emerged over thirty thousand years ago, part of being human has been an indestructible urge to fashion beautiful things and endow them with personal meaning. But few cultures have shown as much interest in meaning as in ornament, and many of the characteristics of “fine” art are specific to a narrow window of place and time. The danger was, and may still be, that the intellectual justification for some art activities would be lost. While that may seem trivial, it might not prove as unimportant as it sounds; should the house of cards that is the art market collapse, along with the galleries, museums, and scholarly institutions it supports, artists in the future could return to the status they held before the Renaissance: artisans, servants of wealth and power with little discretion in their choice of work beyond that enjoyed by other skilled trades.

Until then, artists’ personal choices continue to distinguish fine art from, for example, industrial design. The difference is clear in the work of Sean Morello, who makes it so by working largely with recycled consumer products. In “What Art Is” these consist primarily of cast-off detergent bottles and cardboard containers, from which he cuts brightly colored geometric shapes that he arranges on squares of white polycarbonate. The results, which he calls “paintings” despite their lack of paint or the act of its application, briefly suggest the sort of color exercises that fill 2-D Design classes on their way to invoking symbolic references: stars, sewer grates, and the ghostly residue of mechanical production visible in textiles.

If his choice of found materials and visual references are essentially where Morello starts, what he believes transforms those quantities into art are his effort and his identification with the result, as shown when he places his name on a finished work. The effort, it must be said, is extraordinary, as is the skill evinced. In Street Grating, for example, legal pads provide three slightly differently colored sheets of otherwise identical cardboard. From the center of each Morello has precisely cut a number of rhomboid shapes. These are then swapped systematically between the three sources, until all three are once again whole, each now containing a familiar two-dimensional demonstration of the optical illusion of three-dimensional space. So precise is the technique that only the color change gives away that the image is collaged, rather than printed on. Yet because they are assembled, the thought comes to mind that they could be dismantled and returned almost perfectly to their original state. In another way of thinking it, the three could be added together and, in the design equivalent of the emergence of white light from separate wavelengths, they would cease to be.

In Street Grating, Morello has left in place the glue-and-paper evidence of his material’s source. In the cardboard stripes that comprise a number of pieces, each titled Abstract Painting, the texture of industrial-scale silkscreen color printing and the evenly spaced evidence of corrugation quietly give away the source. The most puzzling, and unexpectedly magical, are the Abstract Paintings made from detergent bottles. Here precision fit and exuberant interaction of color palettes seem to make impossible the artist’s assertion that the material comes from laundromat trash bins.

Not everything in “What Art Is” started out with found materials. Morello broadens his definition is a series of more conventional abstracts that, despite contrasting with the collaged works, show how they are connected in his mind to traditional painting. None of the larger works has a traditional subject; they refer instead to other abstract works by painters like Frank Stella. That, and a wall covered with cardboard squares that suggest Victor Vasarely sends the careless viewer back to find Ellsworth Kelly lurking in the collages. And why not: what better subject could there be for answering the question of art than other works of art? Painting a painting is, after all, no different than painting a building, a street scene, a park, a cosmetically enhanced visage, or any other product of human manipulation.

There is obviously an element of irony in how Morello gets where he wants to go, and there is much fun to be had along the way. But the playing must stop before the artist can achieve his purpose. Clearly, the detritus he uses is chosen more for its status, its societal significance, than out of necessity. If invoking Stella and Kelly seems ambitious, Morello has an even higher art saint in mind. In the 1990 exhibition Classic Modernisms, the Sidney Janis Gallery drew a line between Ellsworth Kelly and Piet Mondrian. It’s that line that Sean Morello wants us to follow.

For classic modernism, the connection was aesthetic, but for Morello it is more. Like Mondrian and his fellow painter Theo van Doesburg, who together founded De Stijl, Morello places the role of art inescapably in the area of Ethics. Instead of pleasure, he speaks of the artist’s responsibility to help others see. Mondrian and van Doesburg believed we would behave more properly if we surrounded ourselves with the proper colors and forms; Morello sets out “not to translate, not to communicate, but to take responsibility.”

This moral purpose energizes every level of this project. For him, the real point in using commercial byproducts to make art lies not in any reference to the objects his images evoke, but to the connection between color palettes and the different social strata that enjoy them. Even the artists he draws on for images come in for re-evaluation in the manner of Clement Greenberg. His stripe paintings are probably more ‘essentialist’ than Stella’s, because the way he applies the paint with a roller is appropriate to the medium, while the hard edges of the plastic or paper paintings reflect the nature of the process they require.

This sort of ideology, this however knowing or unknowingly retrospective justification of art as both process and product, is arguably just another product of the liberation of culture by Postmodernism. If artists are free from the tyranny of the perpetual avant-garde, free not only to explore the future of art but also to mine its past, so too they must be free to adopt whatever ideology supported past art, so long as it can still carry the weight. For Sean Morello, though, liberation has not solved all his problems. For one, he doesn’t seem to have realized that to define what art is he must also state what it is not. What if someone experiences image making as channeling a message from another level of existence: is that not art? For another, a public that has come to see the high status of the artist as a justification for bad behavior is not going to take readily to the idea that art requires personal responsibility. Then again, what if I reject Greenberg’s conviction that the exterior is all that counts because I choose to believe in the artwork’s interior? What, then, happens to abstraction? Even the details are open to question: at the opening, a young painter with a strong talent seemed to take offense at the idea that paint must ipso facto look like it was applied at all. There seemed no point in arguing with her.